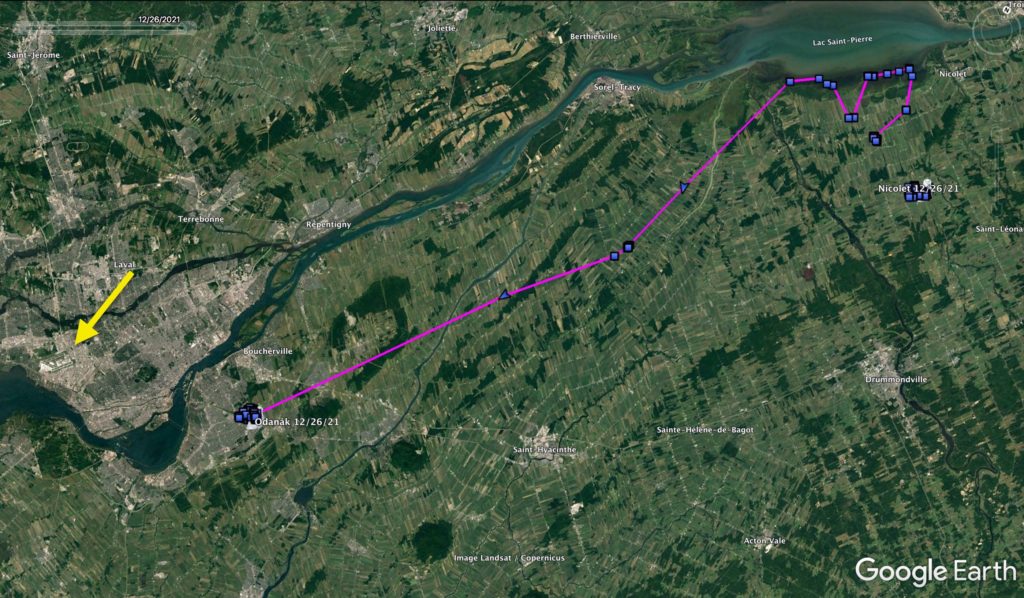 Nicolet, about to be fitted for her transmitter. (©Guy Fitzgerald)

While everyone’s been understandably focused on the holidays — including all of us at Project SNOWstorm — we’ve had some exciting new developments.

The biggest news is the addition of two more Québec owls, moved in recent weeks from the Montréal-Trudeau airport to safer haunts across the St. Lawrence. Both are adult females, and one is, as they say, known to authorities: a snowy owl that has been trapped and moved a couple of times in the past, starting in 2014 when she was a youngster.

We’ll get to her in a moment, but first we’ll start with Nicolet, an adult female trapped at the airport by our colleagues at Falcon Environmental, the biologists who handle raptor control at Montréal-Trudeau. She was fitted with a transmitter by Dr. Guy Fitzgérald from the University of Montréal, who runs the veterinary bird of prey clinic at the school and has been collaborating with us for several years.

Nicolet was released Dec. 18, 2021, along the Nicolet River, just south of the town of the same name — about 115 km (70 miles) northeast of the airport, and in an area of flat, open farmland along the south shore of the St. Lawrence River. (Audrey Maynard, a biologist at the bird of prey clinic, does the honors in the video below.) So far, so good; unlike Aimé a few weeks ago, who quickly returned to the airport and was killed by the back-blast from a taxiing jet, Nicolet seems to have settled down not far from her release site. 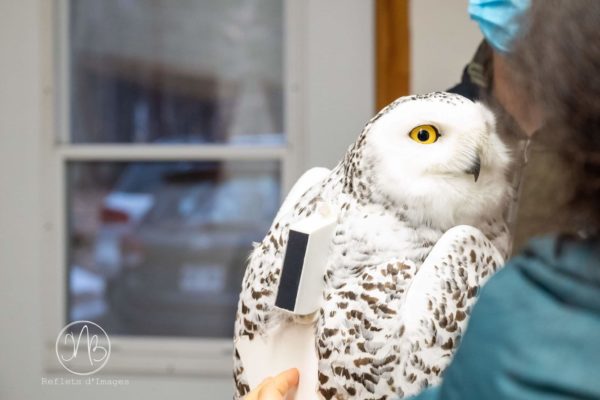 Odanak with her new transmitter, ready to be transported away from Montréal. (The paper at the rear of the transmitter keeps glue, used to secure the knots in the harness ribbon, from getting on her feathers while it dries.) (©Christian Noel)

The second owl is Odanak, a female originally trapped and banded at the airport in November 2014 as a hatching-year (immature) bird — which means we know she’s seven years old. Marilou Skelling from Falcon doublechecked her records and found that they also had caught this same owl again in January 2017, so she’s a repeat offender. Like Nicolet, she was fitted with a transmitter by Dr. Fitzgérald and released Dec. 15; her nickname, Odanak, refers to the Abenaki First Nation community along the Saint-François River just west of her release site (which, in turn, was not too far from Nicolet’s release point). 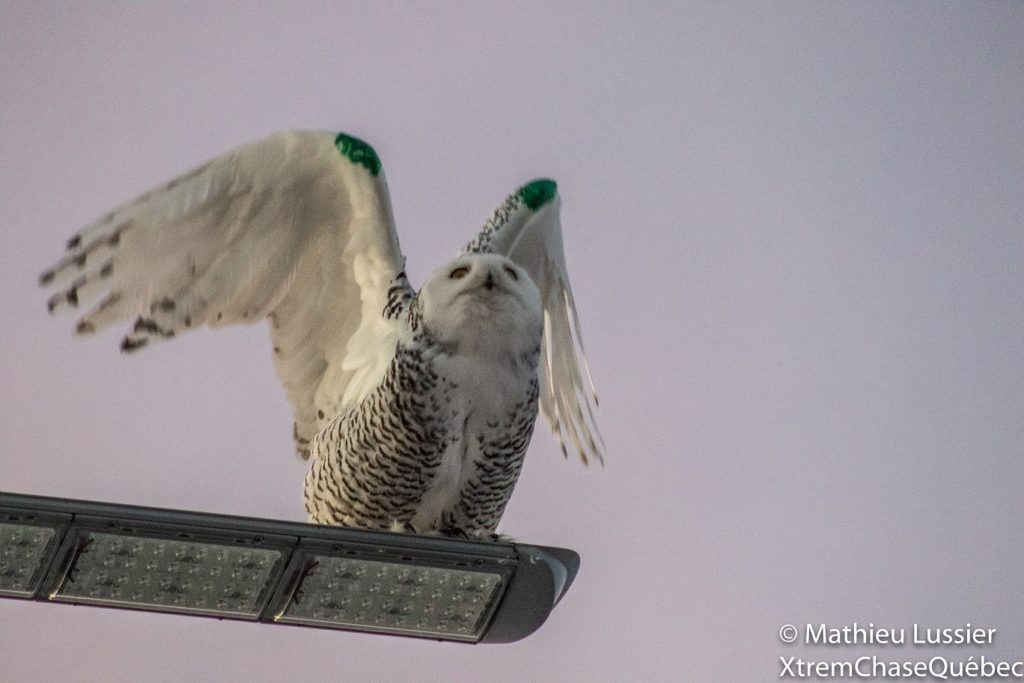 I suppose given her history at the airport, we shouldn’t be surprised that Odanak started moving back southwest again shortly after her release. While she didn’t go all the way back to Montréal, she did fly most of the way there, stopping at a smaller regional airport, Montréal St.-Hubert Longueuil, across the St. Lawrence about 22 km (15 miles) from the main airfield. Marilou knew about her arrival there even before Odanak’s data came in, because the St.-Hubert Longueuil folks reported seeing a snowy with a backpack transmitter and green dye on the bend of her wings, a marking system that Falcon uses so they know if a recently relocated owl (with or without a transmitter) is seen elsewhere. Photographer Mathieu Lussier got a great photo of her there on Dec. 21.

Incidentally, I suspect most birders, looking at Odanak’s heavy black barring, would confidently chalk her up as a juvenile female — but of course, we know that she was hatched in 2014. Plumage markings in snowy owls are complex, and anyone trying to age and sex one from a distance should approach the task with a great deal of humility. Some owls get lighter as they age, some darker, and some do first one, then the other. This is a species that seems determined to keep us guessing.