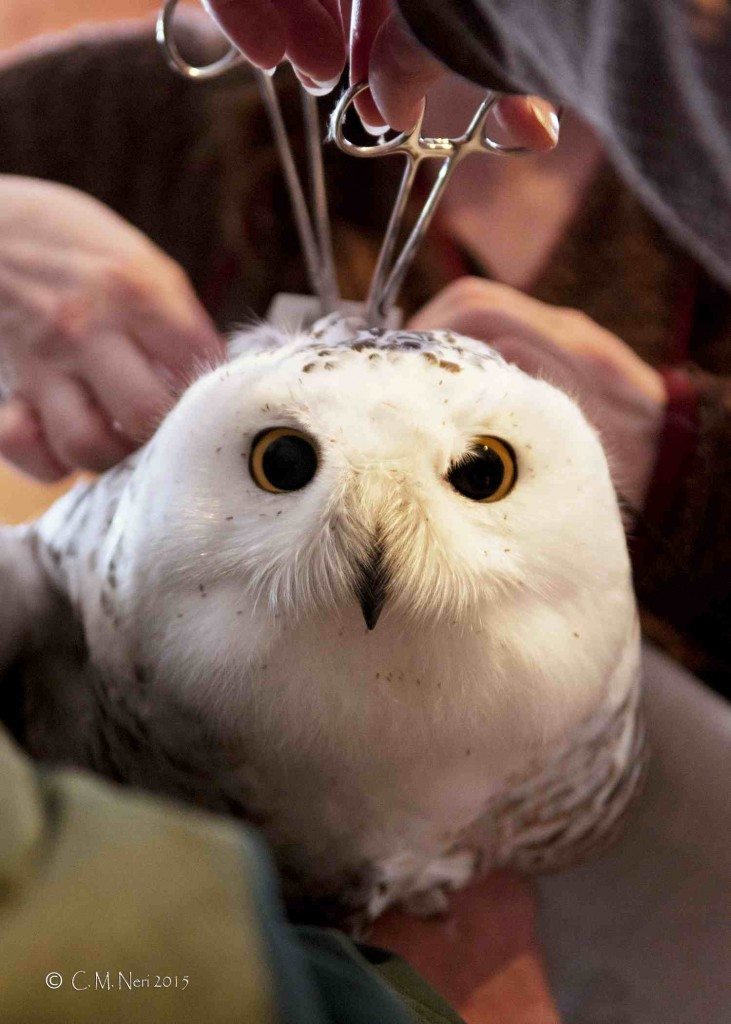 Hemostats hold the Teflon ribbon harness securely while Chris Neri and Nova Mackentley carefully adjust Whitefish Point’s new transmitter. (Those little speckles in her feathers? Chewing lice, which all birds have, but are a lot more visible on a snowy owl.) (©Chris Neri)

The past few days have finally held a hint of spring in parts of the Northeast and Midwest where it’s been a long, frigid, snowy winter — but we’re still charging ahead, with two more newly tagged owls to introduce, and a very cool update from one of our 2014 birds. 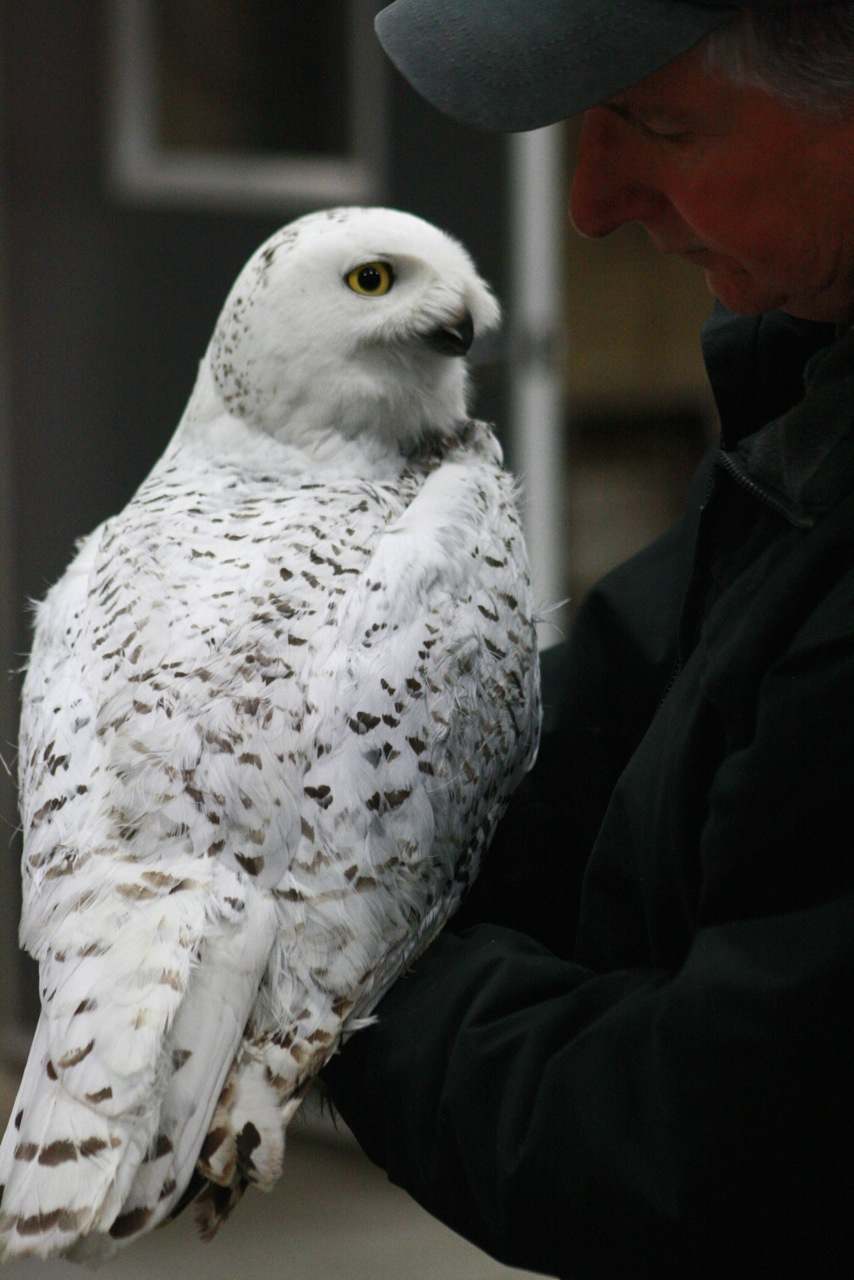 In Wisconsin, Gene Jacobs trapped and tagged an adult female snowy owl that tipped the scales at 2,137g (4.7 lbs.), southeast of Reedsville, in Manitowoc County near Collins Marsh. (That’s about 25 miles [45 km] south of where Gene tagged Kewaunee last winter.) Reedsville’s transmitter was underwritten by donations to Project SNOWstorm.

That’s the second SNOWstorm owl tagged this winter in Wisconsin; last month Goose Pond was tagged and relocated from an airport to the Goose Pond Audubon Sanctuary near Arlington.

And in the Upper Peninsula of Michigan, Nova Mackentley and Chris Neri from Whitefish Point Bird Observatory tagged another adult female — the bird occupying the territory immediately adjacent to Chippewa, the owl first UP owl tagged this winter. They nicknamed the new owl Whitefish Point, for the world-famous owl migration hotspot just to the north in Chippewa County, and her transmitter was sponsored by an anonymous donor.

They got this exceedingly cool, kinda spooky video of Whitefish Point taking off into the snowy darkness, which Nova shot with a hand-held GoPro:

“Like Chippewa, she is among a large concentration of snowies wintering near the town of Pickford in the eastern Upper Peninsula,” Chris and Nova report. “Although we caught her just down the road from Chippewa, we did not realize just how much their territories bordered each other. If the first two days of data points from Whitefish Point are any indication, these two adult females very much respect each other’s territories.”

This is the first time we’ve had owls tagged in adjacent territories, and so far, they seem to following Robert Frost’s advice that good fences make good neighbors. We don’t have a lot of tracking data yet for Whitefish Point, but here’s an initial map that doesn’t show any overlap between the areas the two owls are using. 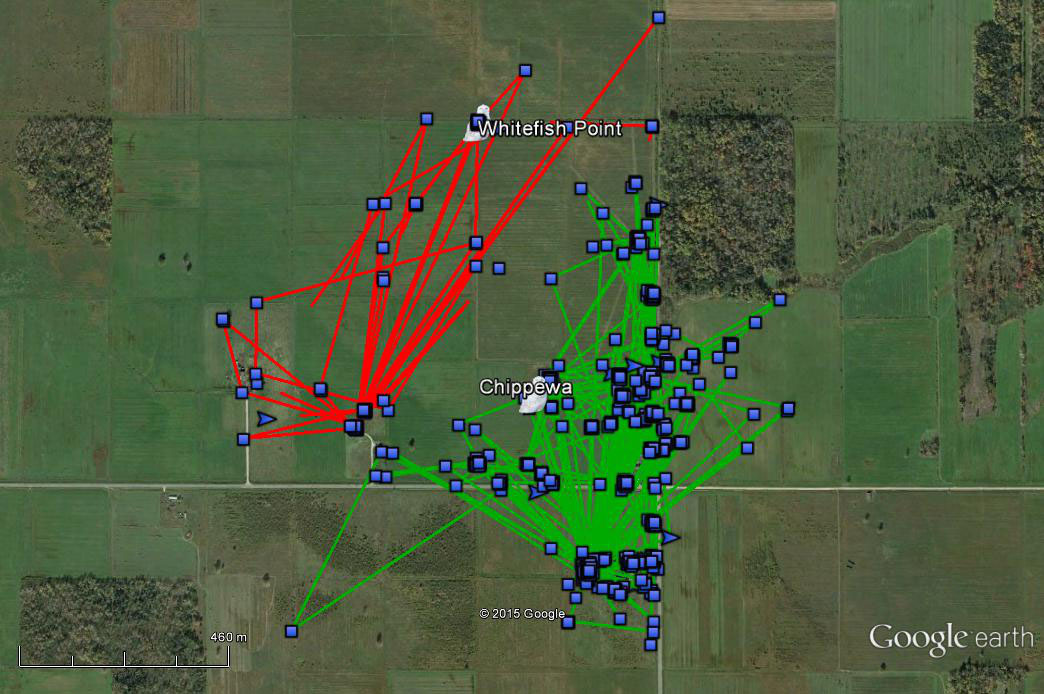 Tracking data from Whitefish Point and her neighbor, Chippewa — the first time we’ve been able to track owls in neighboring territories. (©Project SNOWstorm and Google Earth)

“Right from the first time we went out to this area this winter,” Chris and Nova said, “we were amazed by the concentration of snowy owls and witnessed incredible interactions between owls.”

“The first thing we noticed was that the owls were extremely vocal this winter. The majority of the birds that we spent any time with would regularly make long screeching calls. This simply seemed be a reminder to the other snowies nearby, ‘I’m here. Keep your distance.’ These were not idle threats, and trespassers were met very aggressively. Several times we saw birds cross into another’s territory and literally be taken to the ground by the defending bird. We watched in amazement as two owls locked talons, flipped over each other on their way to the ground and then continued their struggle on the ground for several minutes.”

One thing you’ll notice from Chippewa’s tracking map is that she simply never ventures south — and there’s a very good reason for that. “We know that she has other owls very close to her east, west and south,” Chris and Nova said. “She has not ventured south into another adult female’s territory. She has crossed west into an adult male’s territory a few times, and just once perched on a barn that he regularly used. This adult male had been in this spot since December, but on the day we caught Whitefish Point there was a female perched atop his favorite tree. It may be that birds in the area are shifting around a bit, or maybe some new birds have moved in as spring is beginning to approach. Now that we have Whitefish Point tagged in the territory adjacent to Chippewa’s west it will be very interesting to see how often they cross into each other’s territories.”

“Working with Project SNOWstorm this winter has been extremely rewarding,” Chris and Nova said. “It is incredible to work with these impressive and beautiful owls. Being able to do so while contributing to this study naturally makes it even more so. Whitefish Point Bird Observatory board members Rich and Brenda Keith also contributed very significantly to making Project SNOWstorm a success in Michigan this year, and none of this would have been possible without the financial support provided by Laughing Whitefish Audubon, Kalamazoo Nature Center, Kalamazoo Valley Audubon, Michigan Audubon, and an anonymous couple who very generously sponsored a transmitter. It was a lot of work and we had to work some bumps in the road, but it was well worth it in the end.”

A special shout-out from the Project SNOWstorm team to our colleague, Michigan bander Allen Chartier, who provided much of the ongoing impetus for organizing the incredibly fruitful effort in that state this year. 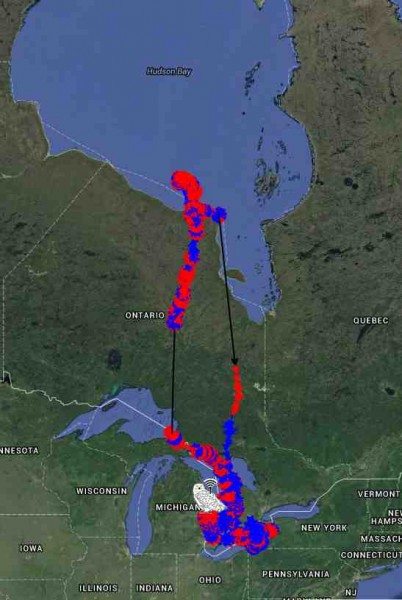 Erie’s movements over the past year (red is diurnal, blue nocturnal). (©Project SNOWstorm and Google Earth)

Finally, we had a huge data dump over the weekend from Erie, from whom we’d heard little the past month. His transmitter (sponsored last year by the Pennsylvania Society for Ornithology) uploaded almost 2,000 locations, bringing all of his movements up to date — and giving us a nifty surprise about his southbound migration.

Most of the other returning owls this winter moved south from the subarctic in October and November, reaching the Canadian/U.S. border region early in the winter. Erie’s data show that in early October, he was still up on Cape Henrietta Maria, the point that divides Hudson and James Bay — not far from where he’d summered along Hudson Bay.

At that point, the subarctic winter’s short days shut down his transmitter, which didn’t kick to life again until Jan. 4, when he was farther south. But not too far south; at that point he was only about 188 km (117 miles) south of James Bay — remarkably far north for that time of year, at least compared with the other snowies. 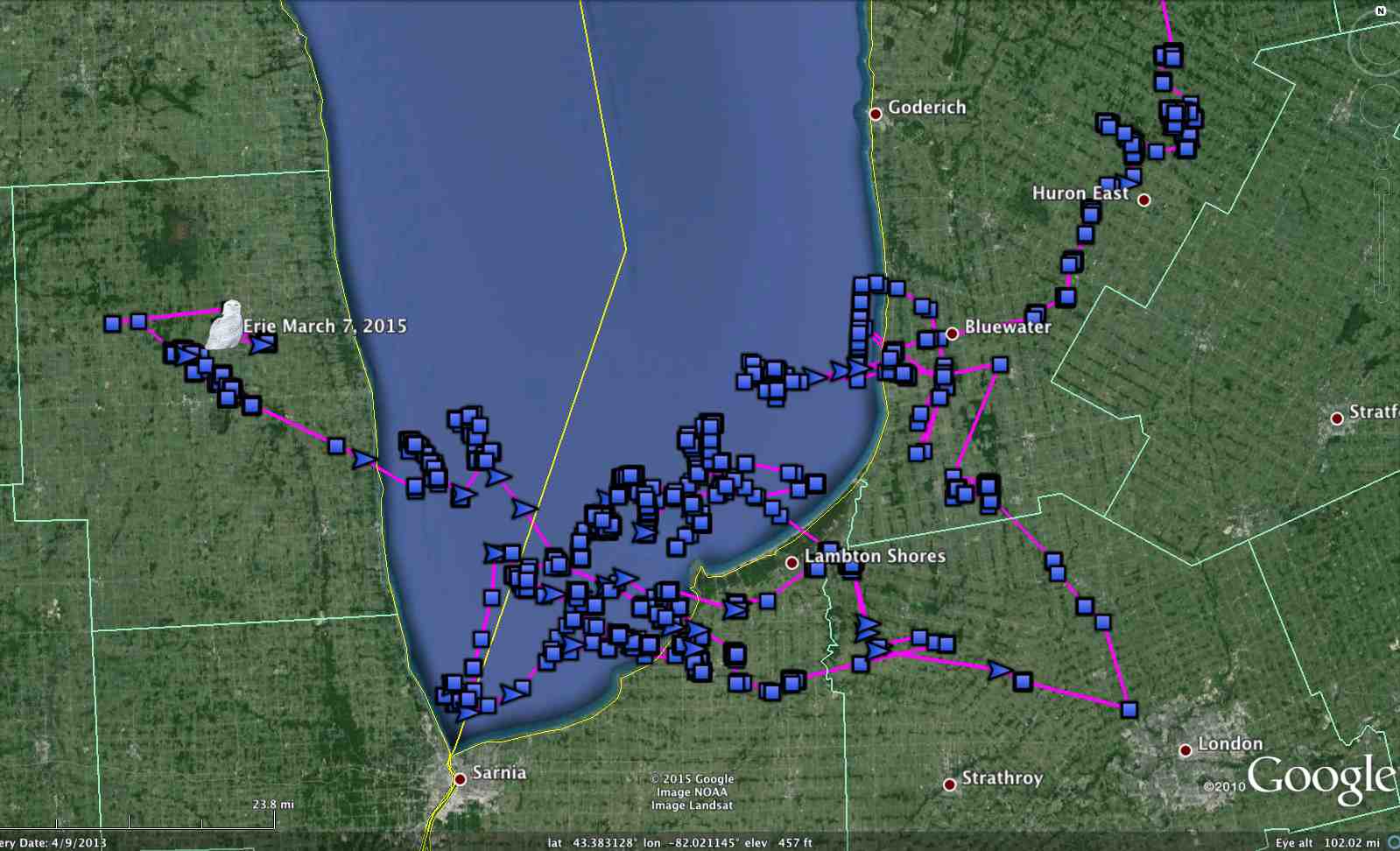 Erie’s movements since late January, when he arrived in southwestern Ontario, then moved out onto frozen Lake Huron. (©Project SNOWstorm and Google Earth)

But he was hauling tail, so to speak, south. From about noon on Jan. 4, until the early morning hours Jan. 5, Erie flew almost continuously another 537 km (335 miles) south to the Bruce Peninsula in Ontario, where he finally rested – and from which his transmitter first reconnected on Jan. 6. His top speed on that passage was 49.5 knots (57 mph/92 kph).

From there, Erie moved south to the area around Lambton Shores, Ontario, before heading out onto Lake Huron, where he spent basically all of February out on the ice. In this was reprising his behavior last winter on Lake Erie (and in contrast to Millcreek, who is spending a terrestrial winter in Toronto).

On March 3 Erie came ashore, this time on the Michigan side of the lake, and has been north of Sandusky in Sanilac County ever since. That’s not far from where he spent time in spring, on his northbound flight. Maybe he’s enjoying a rodentine change of diet, after a month subsisting on waterbirds out on the frozen lake. But he’s moving around quite a bit, and perhaps the first stirrings of spring are working on him. It’ll be interesting to see if the last owl south is one of the first to head north.

3 Comments on “Two New Owls (and a Surprise from Erie)”