Last evening was a big night — we received updated locations for four of our tagged owls. (Some are on a different check-in schedule, and some are probably having battery issues that prevented them from checking in).

We wondered if the reason Erie had been offline for six days was poor recharge on his battery, but last night we found out he’d been out of cell range — way out of range, in the middle of Lake Erie, drifting on wind-blown ice all the way into Canadian waters more than 16 miles from shore, before flying back to land.

Here’s a snapshot of Erie’s movements, but be sure to explore them in more detail by clicking on the Maps link on this page — you can click through flight by flight, and the arrows change color from daylight to darkness and back. 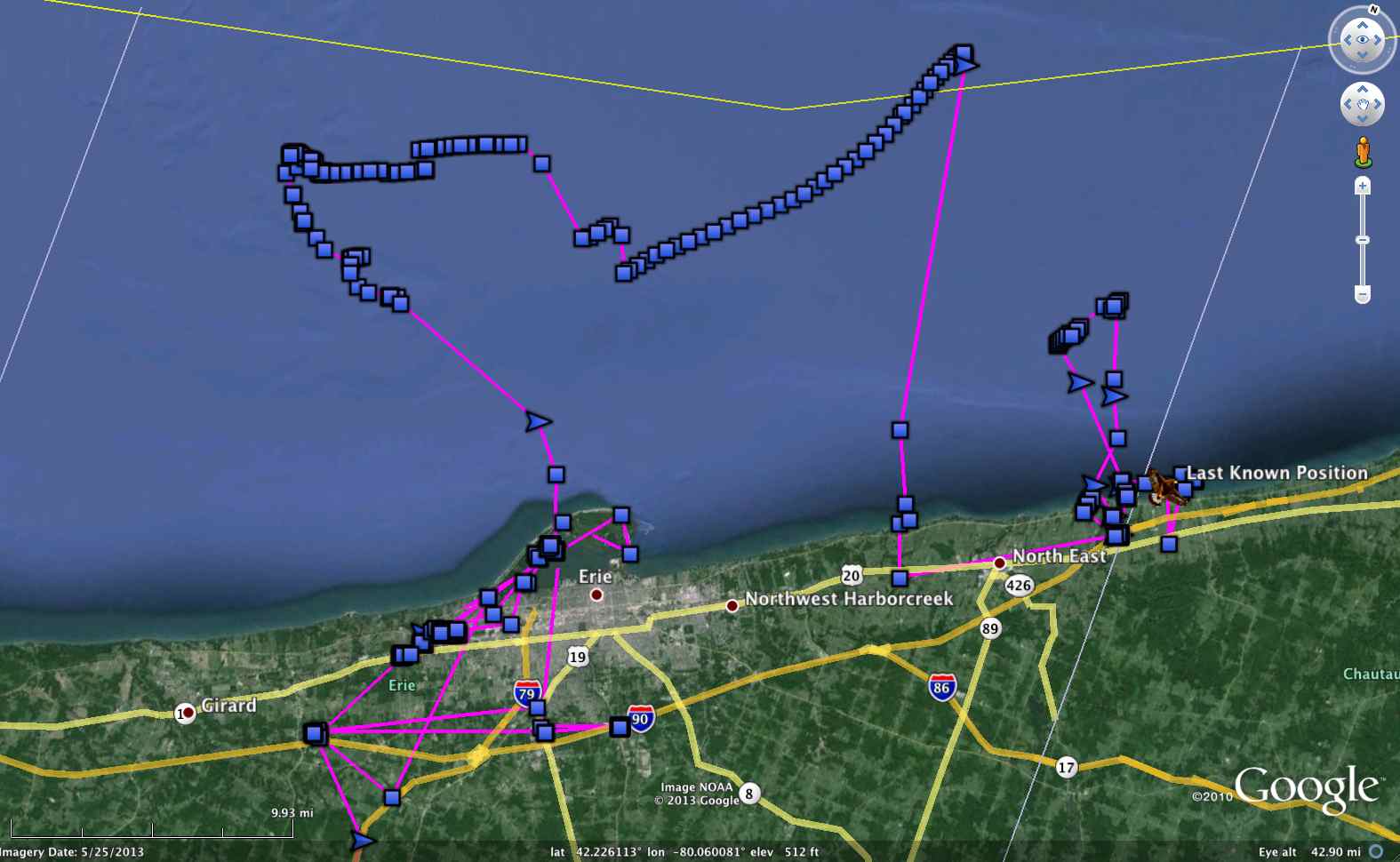 To me, the coolest detail is the curlicue that his track made as the wind shifted and the ice pirouetted in a circle before resuming its course.

Erie isn’t alone on the ice. Both Cranberry and Braddock in New York have spent varying amounts of time on the ice on Lake Ontario — although that lake has only a narrow rim of ice near shore, instead of the almost complete cover on Lake Erie, as shown in this ice chart from NOAA.

We have new maps, and are updating the existing ones with the fresh data. Meantime, here’s a rundown of the other owls we’re watching:

Millcreek: Tagged the same night as Erie, he’s staying a lot closer to where he was caught, spending a lot of time on and around the Erie airport, but also flying regularly a couple of miles east, to hunt an area where I-79 and the railroad intersect.

Freedom: This young female continues to hunt dairy farms near her namesake town in Outagamie County, Wisconsin, north of Appleton. She’s been very active in daytime, moving around a lot more than most of the owls, which generally hang out on one or two roost sites during the day.

Philly: His transmitter missed its transmission for the first time last night, but USDA wildlife tech Jenny Martin saw his just before dark last evening at his accustomed location between the Philadelphia airport and I-95.

Ramsey: This young male owl was tagged over the weekend near Ramsey, MN, north of the Twin Cities, by SNOWstorm collaborator and longtime raptor researcher Frank Nicoletti of Duluth. Ramsey’s transmitter didn’t check in yesterday, and we’re not sure why.

Assateague: Assateague’s transmitter, which came back in contact last week after being AWOL for two weeks, accepted the upload of a new, improved duty cycle, but didn’t check in – its battery may still be depleted from the old duty cycle. His last location was on Barnegat Bay near Forked River, NJ.

Buena Vista was seen as recently as last week on the Buena Vista Grasslands in Portage County, WI, but his transmitter has not checked in since Dec. 30, and we assume the problem remains poor recharge from the original duty cycle, which we learned (the hard way) draws too much power on short, cloudy winter days. If the sun finally shines for a few unbroken days it should recharge, download the new duty cycle, and hopefully come back into the fold.

A tough loss
Braddock and Cranberry