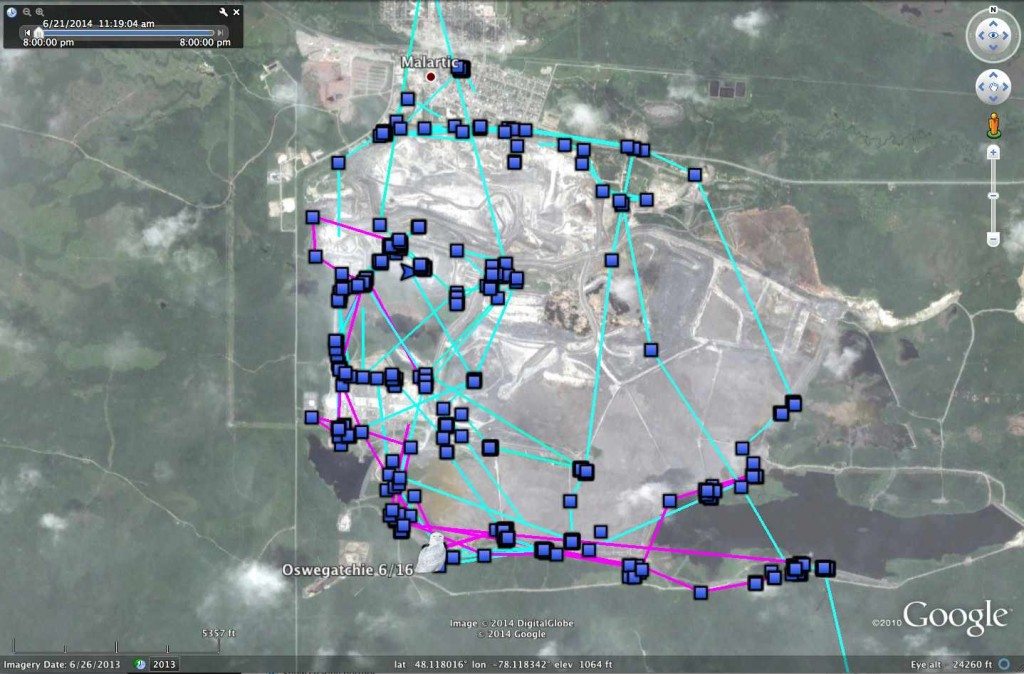 Oswegatchie’s movements around Mine Canadian in Malartic, Quebec, though June 16 (most recent movements in purple). (©Project SNOWstorm and Google Earth)

Oswegatchie’s last check-in was June 16, when he was still hanging around the Mine Canadian in Malartic, Quebec — the largest open-pit gold mine in Canada.

He’d been steering clear of the pit itself — not surprisingly, since a big hole in the ground is not the kind of habitat that would appeal to a snowy owl. (To get a sense of the scale of the mine, there’s a scrolling panoramic imagine here.)

For the most part, Oswegatchie had been staying near the processing center and some of the tailings areas to the south of the pit, but we’ve been uneasy about even this, since even if he’s out of the blasting zone there’s a lot of vehicular traffic and potential toxin issues in a place like that.

He missed his check-in on Thursday evening, June 19, which may well mean he’s finally moved on from Malartic. He’s skipped transmissions many times in the past when he was out of immediate range of a cell tower, but as we’ve pointed out previously, he is now so close to the northern edge of cellular coverage in that part of Canada that a fairly short flight to the north (on the order of just 30 or 40 km [18-25 miles]) would put him past the last GSM tower in that region.

It’s barely 300 km (200 miles) from Malartic to the shores of James Bay, beyond the boreal forest and in subarctic habitat that would suit a young snowy owl fine for a summer loafing location. That’s a fairly easy flight, taking just a night or two, for one of these birds. Has Oswegatchie finally made that trip, like the rest of the tagged owls? Only time will tell.

Losing Oswegatchie
There and Back Again

6 Comments on “Waiting (again) for Oswegatchie”