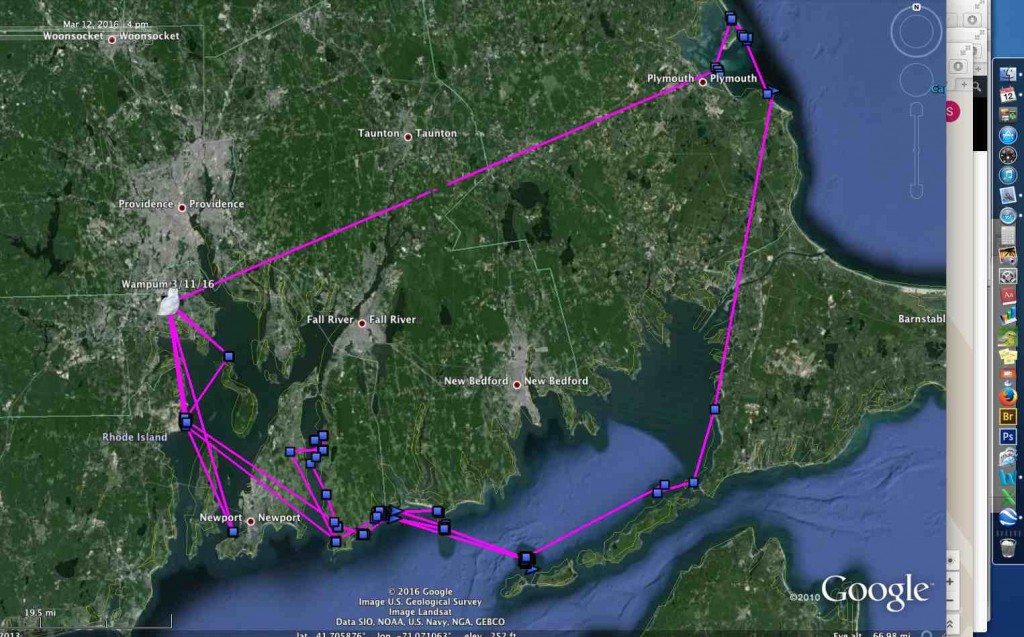 Wampum’s circumnavigation around southern New England the past two months, after we’d all but given up on her. (©Project SNOWstorm and Google Earth)

As readers of this blog know, we’ve had a very bad feeling about Wampum — an adult female that Norman Smith captured at Logan Airport in Boston just after Christmas, tagged and moved to Cape Cod.

She quickly moved southwest, along the necklace of the Elizabeth Islands, winding up at tiny, remote Penikese Island, off Cuttyhunk in Buzzards Bay. She made one quick trip the mainland — and then dropped off our radar in mid-January.

Because our CTT transmitters communicate through the cell network, if an owl’s out of cell range (or in a local dead spot) when it’s time for the weekly transmission, we often have gaps; the transmitters continue to log data, and will send them the next time they’re in range during a transmission cycle.

But as the weeks stretched into nearly two months, all without a peep from Wampum, we assumed one of two things had happened. Either her transmitter was having mechanical problems, or something had happened to her that was catastrophic enough to kill the unit, too.

One possibility was a huge nor’easter storm that came up the New England coast in late January, about the time she went AWOL. Big coastal storms are known to drown snowy owls that get caught in the wind and surf (we lost two tagged birds to one such storm in 2014) and Norman wondered if that was Wampum’s fate, too.

Then last month an owl with a transmitter was photographed near Goosewing Beach in Little Compton, Rhode Island, just across the bay from Penikese Island. Wampum? The pictures weren’t definitive, but we were hopeful — but then, it soon became clear that a snowy Norman had tagged with a satellite transmitter (a project he’s been doing for years independent of SNOWstorm) was hanging around on the Rhode Island coast. The mystery owl could easily have been that bird.

To be honest, I’d given up much hope for Wampum — but never say never, because Friday morning her transmitter phoned home with two months’ worth of data…mostly. It’s obviously having trouble staying charged (why, we can’t tell). Some days we have a full complement of 48 half-hourly locations, other times as few as two. But we do know where she’s been since she went off the grid.

At the end of January she made a rapid flight north to Plymouth, Mass., visiting Long Beach and Duxbury Beach, then flew 43 miles (70 km) southwest to T.F. Green Airport in Providence, RI. In early February she moved around Narragansett Bay and the surrounding coastline, including Goosewing Beach — it turns out she was, in fact, the mystery owl photographed there. 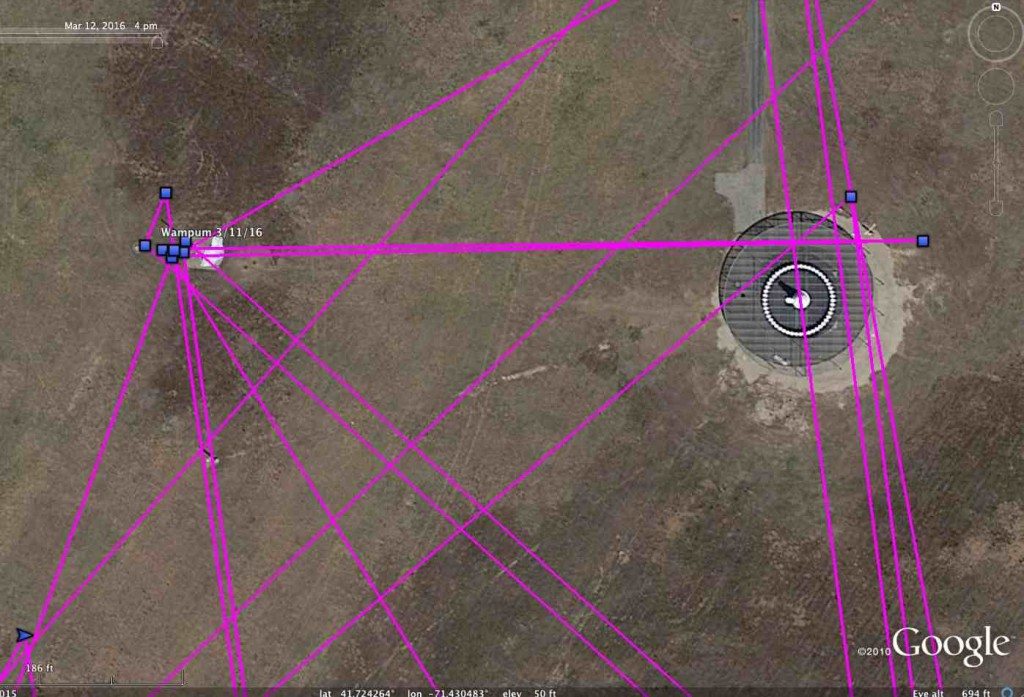 Wampum’s location on Friday morning — perched on a short antenna mast in the middle of the runways of T.F. Green Airport in Providence, RI. (©Project SNOWstorm and Google Earth)

In the past two or three weeks, she’s repeatedly visited both Green Airport and the Quonset Point Air National Guard Station on the east side of Narragansett Bay — neither of them very safe locations for a snowy owl, obviously. Indeed, when she checked in Friday morning, she was perched on a small tower in the middle of Green Airport.

Her transmitter is still not charging as aggressively as the others we have on owls, especially given the rapidly increasing day length and solar angle — but it’s still nice to know she’s alive and apparently doing well, and we hope to hear a lot more from her.

Buckeye's Bonanza
Spring is in the Air

2 Comments on “Wampum is Back!”