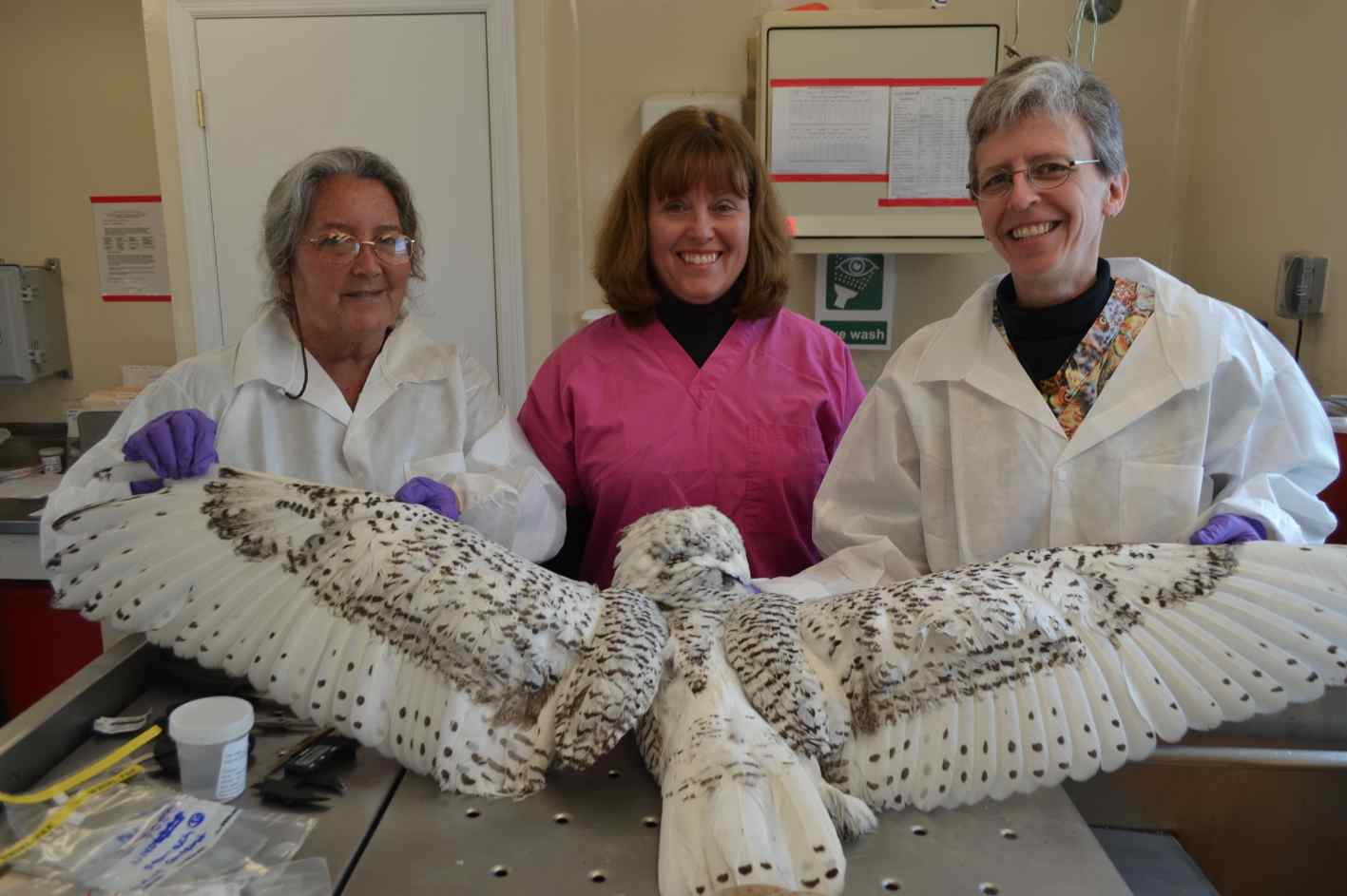 From left, Drs. Cindy Driscoll, Sherrill Davison and Erica Miller prepare to perform a necropsy on a snowy owl found dead last winter. Such painstaking exams, along with sophisticated lab work, are revealing the toxins and other dangers that snowy owls face. (©Cindy Driscoll)

(Dr. Cindy Driscoll is the state fish and wildlife veterinarian for Maryland’s Department of Natural Resources [DNR], and has served as the veterinary coordinator for Project SNOWstorm since our start last winter. Read how Cindy got involved through SNOWstorm cofounder Dave Brinker — and click here for a longer story and photos from the University of Pennsylvania about how Project SNOWstorm, Cindy and her colleagues are learning a lot from the snowy owls that didn’t make through last winter — Scott Weidensaul.)

It was Dec. 19, 2013, and my long-time Maryland DNR colleague and friend Dave Brinker was on the phone.

“What are you doing?” he asked in a tone I recognized — one that usually means Dave’s about to propose something interesting. I told him I was leaving work and heading off to get my shopping done…but that since he was calling, I suspected I might be doing something else soon.

Dave explained that snowy owls were showing up in record numbers. He explained what Project SNOWstorm was trying to do — not only in terms of banding and tagging live owls, but learning as much as possible from those that turned up dead.

He asked if I’d be interested in coordinating veterinary efforts throughout the Northeast to collect and examine carcasses, and to collect blood samples from live owls at banding. So much for shopping! “I’m in!” I told him enthusiastically.

Not long after that, Dave and I were on Hart-Miller Island in the upper Chesapeake, in an attempt to capture, band and take blood from four snowy owls reported there. While we didn’t get any owls that day, we had lots of time to talk and develop a tentative plan for sampling both live and dead owls through the winter.

The unfortunate fact is, many of the snowy owls that come south in an irruption don’t make it. They are struck by planes at airports, hit by cars or trucks, electrocuted on power lines, or die from disease or toxins. 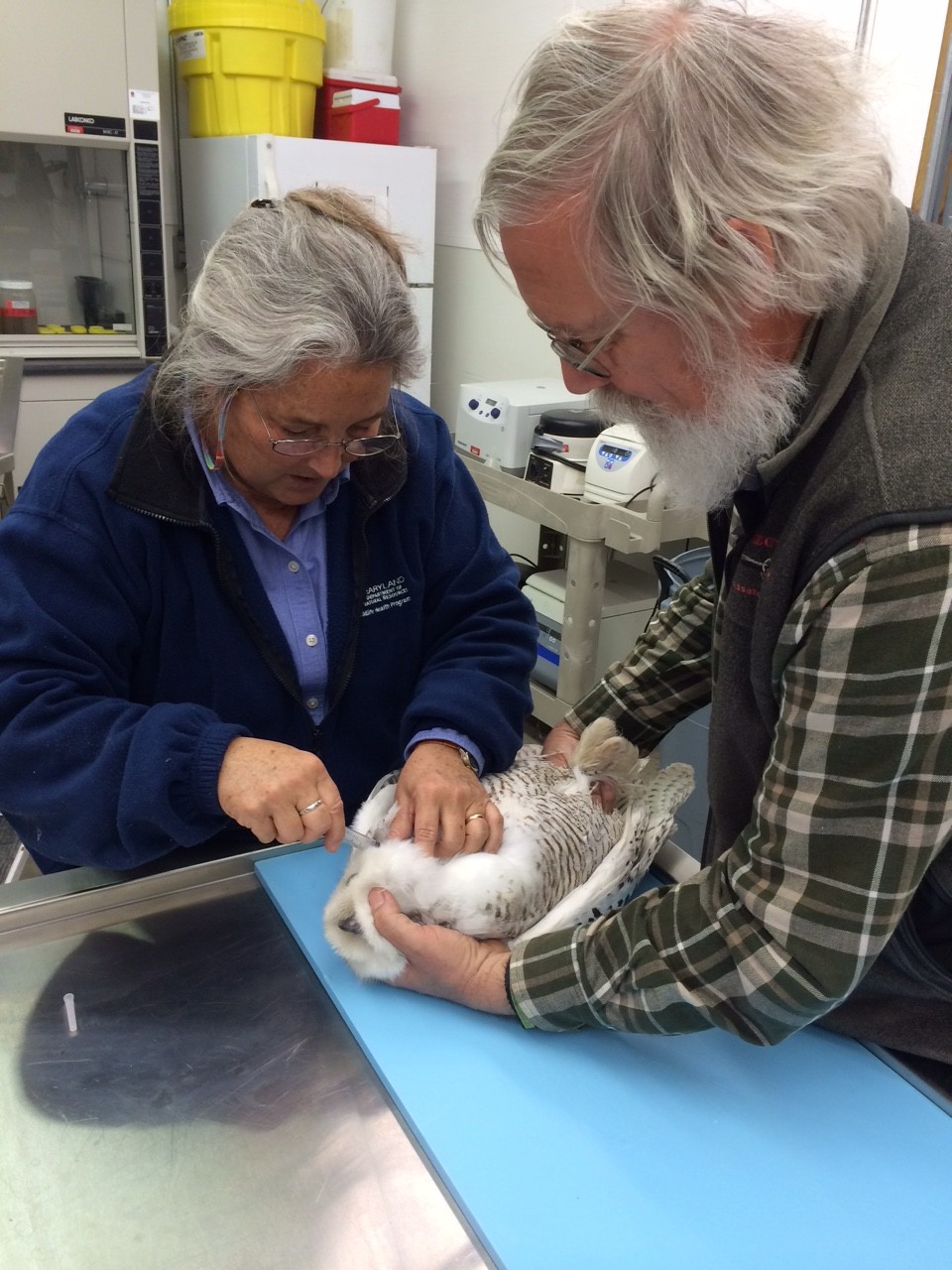 But they are a treasure trove of information, if they are handled properly. So the first thing to do was to begin collecting carcasses and having them examined in a consistent way across the entire Northeast — not an easy task. Because SNOWstorm had no money at that early date, we decided to freeze any owls found dead while we coordinated exam and sampling procedures.

I developed protocols and sent them to vet colleagues across the irruption zone, to use if they got live owls or carcasses. Each state agency agreed to provide funds for necropsy sampling in their states, and as donations came in from the public, Project SNOWstorm was able to foot the bill for the remainder of the carcasses and for blood subsamples from live birds, to test for toxicology.

Since we had no normal “values” (the term for threshold levels of toxins) for either live or dead snowy owls, the task seemed monumental, to say the least. The next job was to contact wildlife rehabilitators, get them on board. I reached out to my friend and fellow veterinarian Dr. Erica Miller, who had recently retired from Tri-State Bird Rescue in Newark, Delaware, and was working for New Jersey DNR.

We, in turn, contacted Dr. Sherrill Davison at the University of Pennsylvania’s School of Veterinary Medicine. Sherrill often conducts necropsies for Tri-State, and she agreed to provide a central lab for all the necropsies.

Through Sherrill’s lab at Penn’s New Bolton Center, near Kennett Square, PA, were were able to get all aspects of specimen analysis completed at UP, including toxicology, microbiology, parasitology and histology work.

The end result was that, through my initial contacts, snowy owl carcasses from Maryland, Pennsylvania, New Jersey, New York, Massachusetts, Maine and Wisconsin were examined using consistent procedures, with most of the exams conducted at UP.

But what about live birds? When Dave Brinker or Steve Huy were trapping healthy birds for banding or tagging, they would contact me to have blood drawn while the birds were in hand. Because I can’t be all over Maryland at once, I contacted Drs. Ellen Bronson and Allison Wack at the Maryland Zoo in Baltimore, MD, to see if they might be interested in helping out with blood sampling — which they were. In fact, Ellen agreed to run standard serum chemistries and CBCs for our live snowy owls.

So then I was “on call” for not only dead owls but live ones, too. Dave and Steve would call me and either I collected blood samples myself or contacted Ellen and Allison if they were closer to the banding site. Tri-State also collected blood and often drove to a transfer point and got samples to the zoo. Whew!

So where are we now? Our preliminary findings were summarized into a poster presented at The Wildlife Society meeting in November in Pittsburgh — a collaboration with six different states and organizations. Since then, however, we received additional carcasses from last winter for exam, and will continue to compile results into a comprehensive manuscript incorporating all results.   And now that snowy owls are back in our region — we’ll just have to see if this winter will be as busy as last winter! Stay tuned!

(For more about the results of the kind of necropsy and lab work that Cindy’s described, check out the University of Pennsylvania story about SNOWstorm’s work here.)

9 Comments on “Wanted: Dead or Alive”