It was a pretty quiet week for our tagged owls — though one of them was courting danger, briefly back at an airport we’d really hoped he would avoid.

We’ll start with Flanders, who remained on the north shore of Lake Ontario, having ambled back southeast of Napanee, Ontario, to the farmland around Hawley, just a few kilometers from the lakeshore. After having spent most of the past month out on a small islet off Amherst Island, she is hunting the small dairy farms that make a patchwork of fields and pastures in this area. 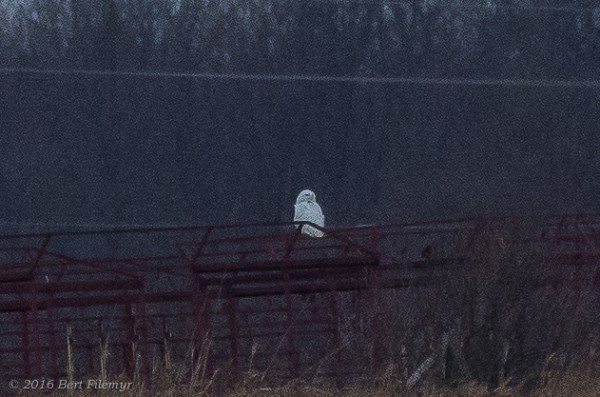 Sitting far from the road (and photographed under poor conditions), Baltimore hangs out on a piece of farm equipment on Amherst Island earlier this week. (©Bert Filemyr)

Still on Amherst itself, Baltimore is wearing a hole in the map, rarely straying from his winter territory just west of Stella. A number of folks were keeping an eye out for him this week, including my friend Bert Filemyr of the Delaware Valley Ornithological Club, who makes regular trips to Amherst. Bert’s a great photographer, and got some stunning owl images on Amherst this time, but his only photos of Baltimore were from a great distance — the owl’s been hanging out pretty far from the road during the day.

Chaumont did not check in — his transmitter battery was quite low, and the weather has been incessantly gloomy up there all week. However, the unit did take up a new duty cycle the last time it checked in (a configuration that made a huge difference in energy conservation in Baltimore’s unit) so we expect Chaumont will be transmitting again once we get some sun.

One of dozens of rough-legged hawks that (along with snowy owls, harriers and other raptors) have been preying on the abundant meadow voles on Amherst Island this winter. (©Bert Filemyr)

In the meantime, the raptors of Amherst have plenty to eat. Voles are abundant there this winter, and they’ve had less snow than some places farther south. One result has been a tremendous number of rough-legged hawks — Bert and other birders have reported up to 20 recently.

By the way, if you haven’t checked out the interactive maps recently, please do so — SNOWstorm team member Don Crockett, who created the Tracker maps we use, has added some cool new features, including the ability to go forward or back one sunset at a time. 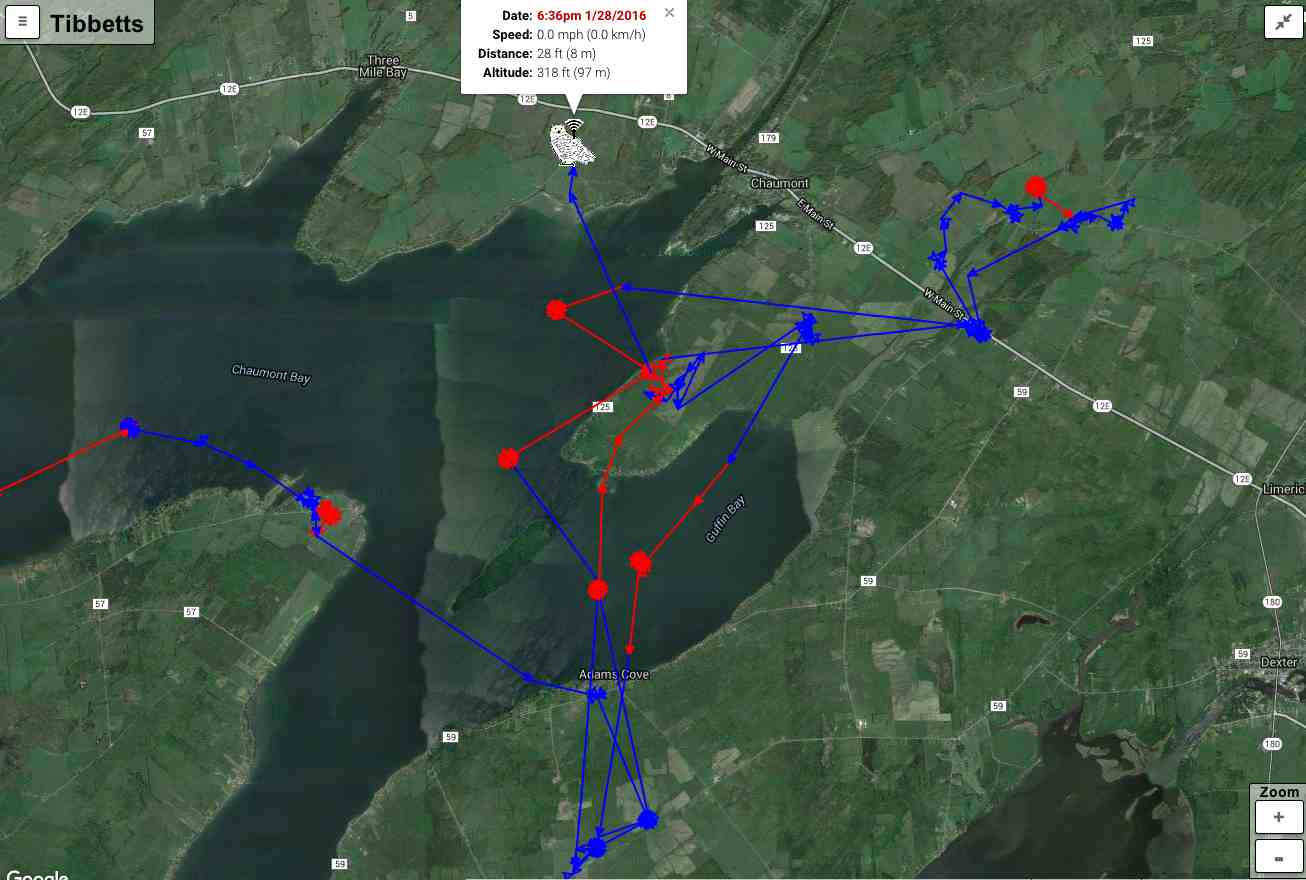 Like almost all of our tagged owls, Tibbetts does most of his moving and hunting after dark (or in the last hour of evening, especially on overcast days. (©Project SNOWstorm and Google Earth)

If you look at the map for Tibbetts, our newest tagged snowy, you’ll notice something that’s held true for virtually every snowy we’ve tagged — the vast majority of his movements take place after dark (and a lot of the red lines, denoting daytime tracks, are either very early morning or late afternoon on cloudy days).

Tibbetts continues to range around Chaumont Bay on the New York side of the border — sometimes out on the ice, sometime on land. His rambling movements are a real contrast to Baltimore’s settled behavior — but then, Baltimore was a gadabout last winter, too. 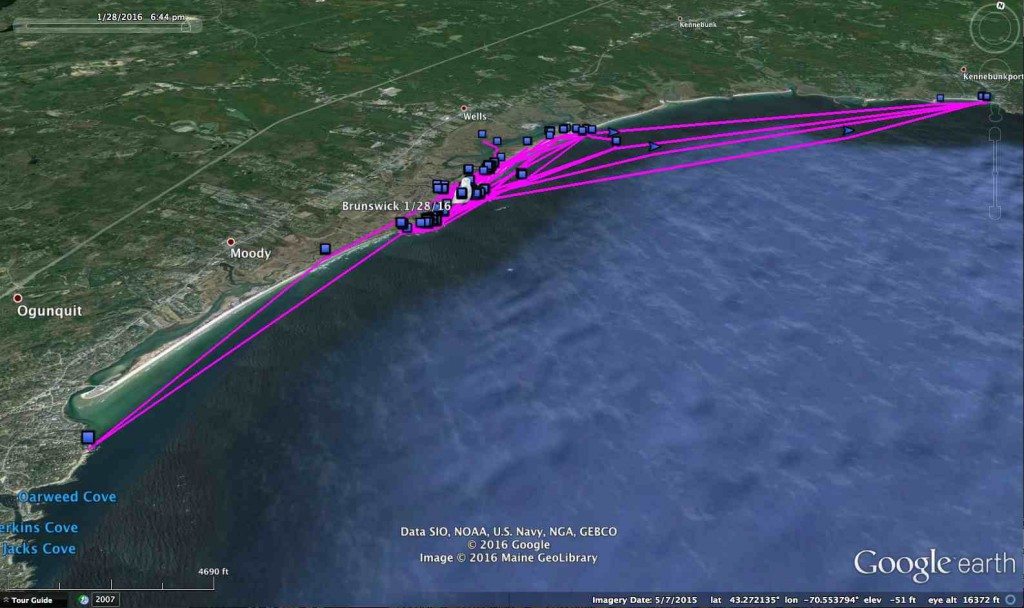 On the New England coast, we have a similar contrast with two owls that were relocated from airports for their safety. Brunswick has been moving a bit farther afield over the past week, but still staying within a 9-mile (14.75 km) swatch of the southern Maine coast. Her base of operations remains the area around Rachel Carson NWR near Wells, but a couple of times she’s flown north to the jetties that frame the mouth of the Kennebunk River near Kennebunkport, and for the first time she flew south to Israels Head, a rocky promontory in Ogunquit, but then turned around and immediately headed back to the refuge area.

The nail-biter this week was Salisbury. When he checked in last week, he was making tracks directly toward Logan Airport in Boston, where he’d been trapped Jan. 17 and relocated to northern Massachusetts. But Salisbury’s transmission last week showed him bee-lining it back south toward Logan, and he was only a few miles from the airport when his transmitter sent the previous week’s data. 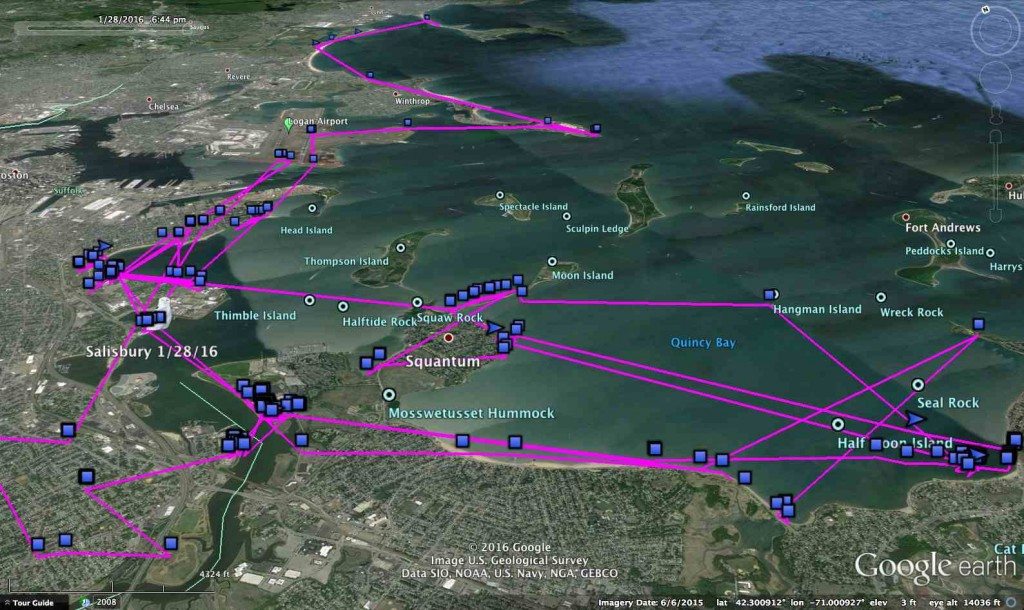 A nail-biter: As we feared, Salisbury headed back to Logan Airport (green icon), but for most of the rest of the past week he’s stayed well to the south, along Dorchester and Quincy bays. (©Project SNOWstorm and Google Earth)

We were holding our breath to see what he’d do — and in fact, the little stinker did just what we were afraid of, and spent the next day, Jan. 22, perched right next to one of the main runways at Logan. Fortunately, he moved south again that evening, and except for one return on Jan. 26, he’s mostly stayed around the rim of Dorchester and Quincy bays, including some time hanging out on the buildings of UMass Boston.

His last position on Thursday evening was just across Savin Hill Cove from UMass, at the end of a very long dock at the Savin Hill Yacht Club. Let’s hope the gulls and ducks are tastier there than back at Logan.

This is the second time that Wampum has failed to check in. It could be a transmitter issue, but Norman Smith was concerned about her in the wake of the huge blizzard last weekend. Although the deep snows farther south generated headlines, the storm also spawned hurricane-force winds and tremendous surf along parts of the coast, and if she was still in the outer Elizabeth Islands, the conditions could have been very bad indeed.

Big storms can be dangerous for snowies. Two winters ago, another huge nor’easter with similar winds and waves drowned two of our tagged owls (Sandy Neck and Plum) on the Massachusetts coast, along with least four other untagged snowies that were found washed up in the wake of the storm. We’ll just have to keep our fingers crossed, and hope we hear from Wampum soon.

Dakota Makes 40
Help us Fund the Future of Project SNOWstorm