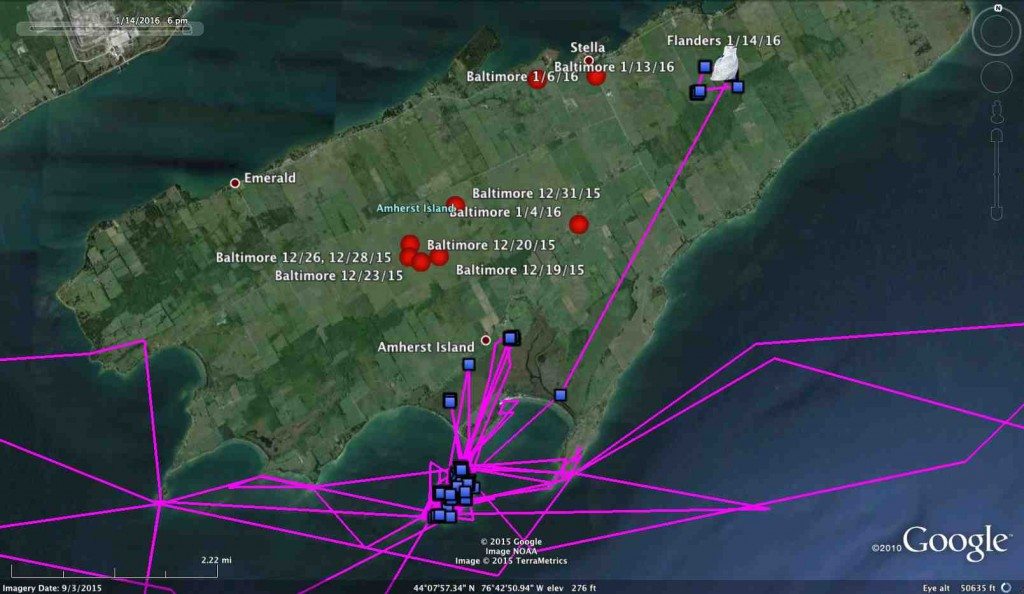 Flanders seems to have tired, at least temporarily, of her winter home on Nut Island, and made several excursions to Amherst Island last week. Baltimore continues to roost near the village of Stella. (©Project SNOWstorm and Google Earth)

While we’re excited about our newest tagged snowy, Brunswick, up in Maine, we’re keeping tabs on our other active transmitters this winter — and we had an intriguing blip from an owl we’ve not heard from since last winter.

In Lake Ontario, Baltimore and Flanders continue to hunt on and around Amherst Island. A week or more ago, we pushed through a new duty cycle on Baltimore’s transmitter, which has been saving energy and sending us increasingly large batches of his backlogged data from last summer (while continuing to record new GPS locations).

The last transmission, for example, contained almost 2,700 GPS locations, taking us through his movements in mid-summer. Not to be a tease, but we’re going to wait until we have all of his accumulated data — which at this rate should take another week or so — before we lay it all out for you. Even so, what we have thus far is pretty cool.

Flanders may have gotten tired of Nut Island, the small islet off Amherst, where she’s mostly been since mid-December. The past few days she’s made flights to the main island, and on the 14th she flew 8.6 km (5.5 miles) up to the eastern end of the island near the village of Stella, where she was perched on a fencerow at dusk when her transmitter checked in. 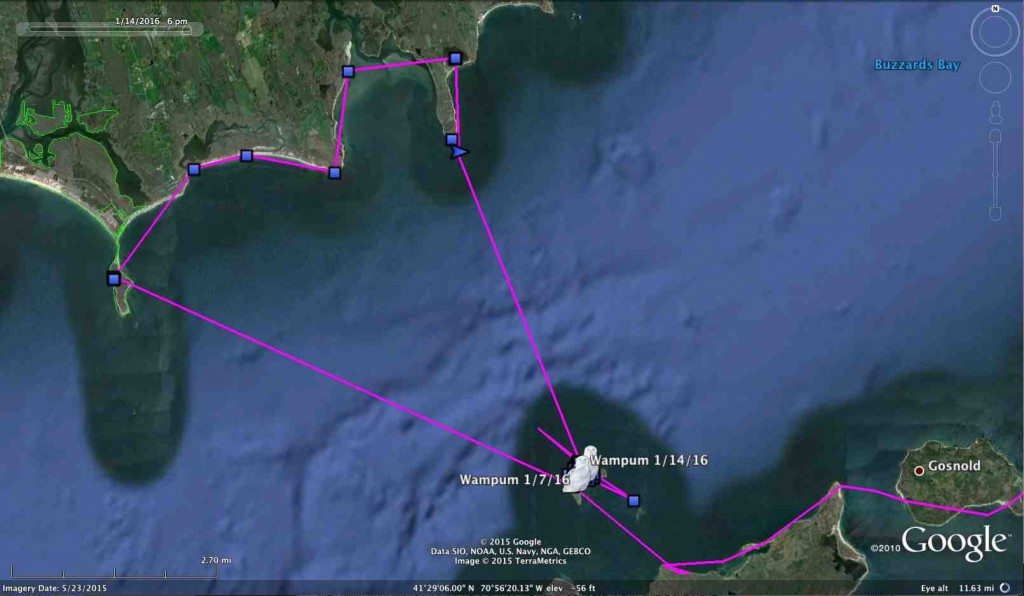 Taking off from tiny Penikese Island, Wampum flew to the Massachusetts mainland, made a three-hour circuit of the local coastline, and then beelined it back to Penikese. (©Project SNOWstorm and Google Earth)

Meanwhile, down on the Massachusetts coast Wampum similarly made a quick excursion from Penikese Island, the small, largely uninhabited island at the end of the Elizabeth Islands chain. Just before dusk on the 12th she flew northwest over Buzzard’s Bay, making a 6.6 mile (10.6 km) crossing to a small promontory called Gumby’s Head near Westport, Mass., part of the Horseneck Beach State Reservation.

She kept moving for the next three hours or so, making a seven-mile (11.3 km) circuit of the local bays, then flying from Mishaum Point back across the bay to Penikese Island, where she started.

During her time on Penikese, Wampum has been all over the 76-acre island, including a lot of time perched on the buildings and fences of the residential facility for teens being treated for substance abuse and mental health issues, as well as the old foundations of the state leper colony established there in the early 1900s. One favorite perch site is what looks, on Google Earth, to be a large satellite dish.

On Thursday I was in a meeting when my phone buzzed with a CTT notification text, and my eyebrows must have shot up as I read it, because someone asked me if everything was all right.

I was surprised because the auto-notification was from Chaumont, an adult male tagged last winter by Tom McDonald near Chaumont, New York — very close to where Flanders was trapped this winter, and only about 29 miles (46 km) from Amherst Island.

We hadn’t heard from Chaumont since April 6 of last year — and we’re not really sure where he is now. The transmission was almost literally nothing but an electronic “Hi!” — there was no data with it, and not even a rough latitude or longitude. The battery was only a whisper above the level at which the unit goes into hibernation, which probably explains the brevity.

Our one clue is that Chaumont’s unit checked in through the Rogers cellular network, which is Canadian, so we know he’s somewhere north of the border. But for the moment, exactly where is anyone’s guess. He may be on the edge of useable cell service, or far enough north that his solar panel is getting very little sunlight. Or it may be a continuation of the problems we saw last winter, when his transmitter struggled to maintain voltage in the near-continuously cloudy weather of eastern Lake Ontario.

Buena Vista, our 2013 owl whom we heard from briefly on Nov. 1 with part of his backlogged data, remains AWOL. At the time of that check-in he was right on the edge of cellular coverage in Manitoba, and we’re not sure if he moved out of range altogether, or if the long winter nights in that area put his unit to sleep. We’re still hopeful of more data from him as the days begin to lengthen.