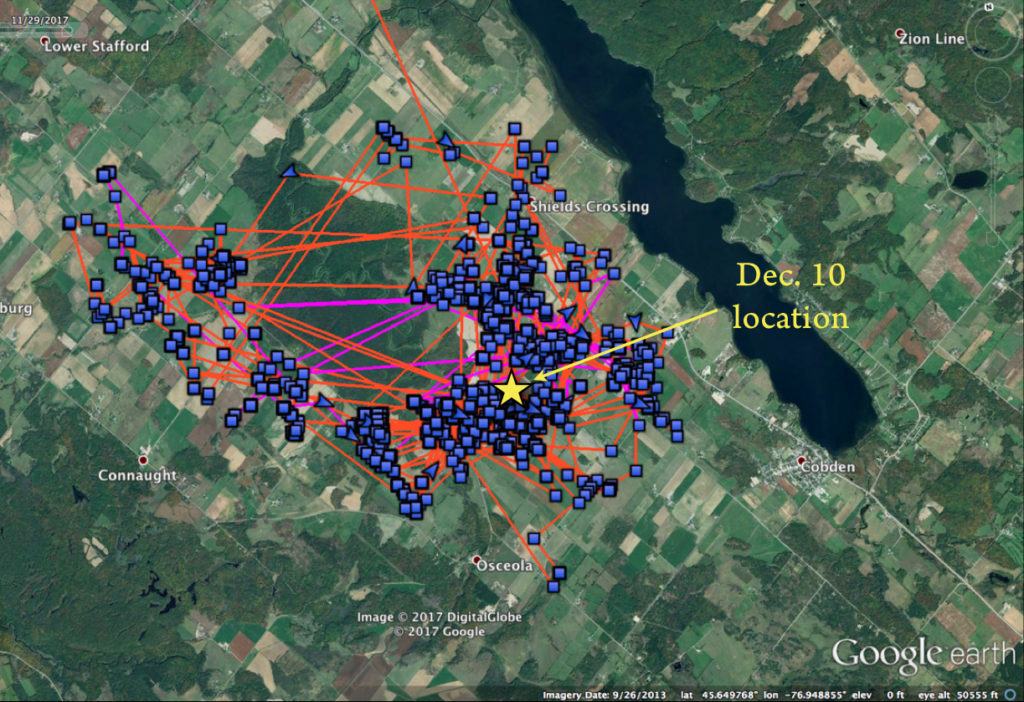 Hardscrabble’s location on Dec. 10, right in the heart of his 2016-17 winter territory. (©Project SNOWstorm and Google Earth)

The news last week was somber, with the death, probably from electrocution, of a newly tagged owl in Maine. So we’re delighted to share some very exciting positive news — Hardscrabble is back.

Longtime SNOWstorm supporters will certainly recognize that name. Hardscrabble is an adult male originally tagged in February 2016 by Tom McDonald, near Hardscrabble Road on Cape Vincent, NY, at the eastern end of Lake Ontario. The almost completely white bird, which was already at least four years old when he was tagged, spent the winter in the Cape Vincent area and then migrated north that spring to the Ungava Peninsula of northern Quebec. He paused for about two months on the western Ungava, where it appears he at least attempted to nest, but the fairly early date (July 7) at which he abandoned the area suggests the nest may not have been successful.

Last winter, Hardscrabble came south in mid-December and spent the winter in a fairly restricted territory near Cobden, ON, just east of Algonquin Provincial Park and about 100 km (62 miles) west of Ottawa. He stayed there until early March, when he began moving — first south, then north. The last we heard from him was April 20, on the southeast coast of James Bay. 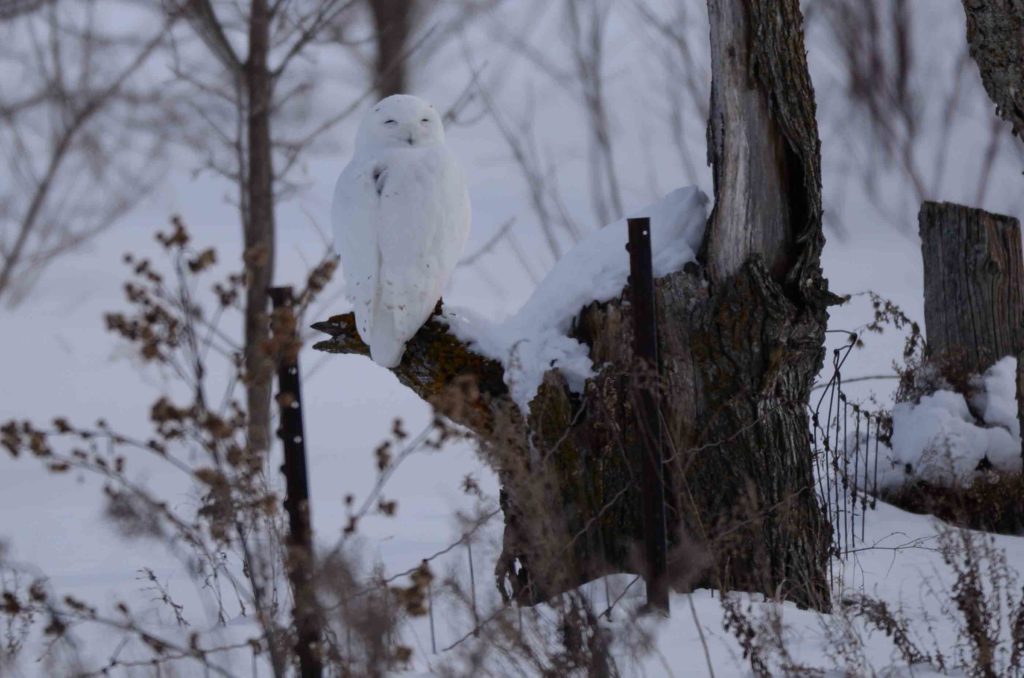 Hardscrabble strikes a quiet pose last winter on the same territory to which he’s returned this month. (©Daniel and Patricia LaFortune)

Until now. On Dec. 10, we received an abbreviated transmission from him, with a little bit of his stored spring migration data — but more importantly, his current location was right back where he spent last winter, on the same territory near Cobden. In fact, he was sitting on a utility power (a hydro pole to our Canadian friends) he’d used as a nighttime perch many times last winter.

Hardscrabble’s battery was just above the operational threshold, which as we’ve mentioned before is typical of snowy owls newly returned from the Arctic or subarctic in early winter. The units are programmed with a so-called geofence — a GPS boundary that, once crossed on the way south, kicks the transmitter into a power-saving mode so it more quickly recovers its charge to send us stored data. Once his battery is charged and his stored data retrieved, we’ll send the unit another command to revert to a normal winter schedule.

Our big question, of course, is whether Hardscrabble nested this summer, especially if he was back in the Ungava. We know a lot of other owls nested there this year, including Wells, who came back a few weeks ago. But we’ve never had a tagged male return with complete nesting data, and it would be great to have the full-season movements of a parental male — which is likely going to forage a much wider area — to compare with nesting females like Wells and Dakota.

It may take some weeks for Hardscrabble’s battery to come back to full strength. In the meantime, we’ve had some folks on the ground looking for him, but this winter there are a lot of other, untagged snowies in that area, and they haven’t spotted our pure-white guy with a backpack — yet.

Meanwhile, we received another brief transmission last week from Chickatawbut, whose battery is also recharging since her return south. That transmission included a bit more of her spring migration data, but not a current location; when she last checked in she was along the Gulf of St. Lawrence. It’s always hard to be patient at this time of year, waiting for a returnee owl’s battery to pick up juice, but the payoff is  worth the wait.

In Memorium: Don Crockett
The Wrong Kind of News

2 Comments on “Welcome Back, Hardscrabble!”