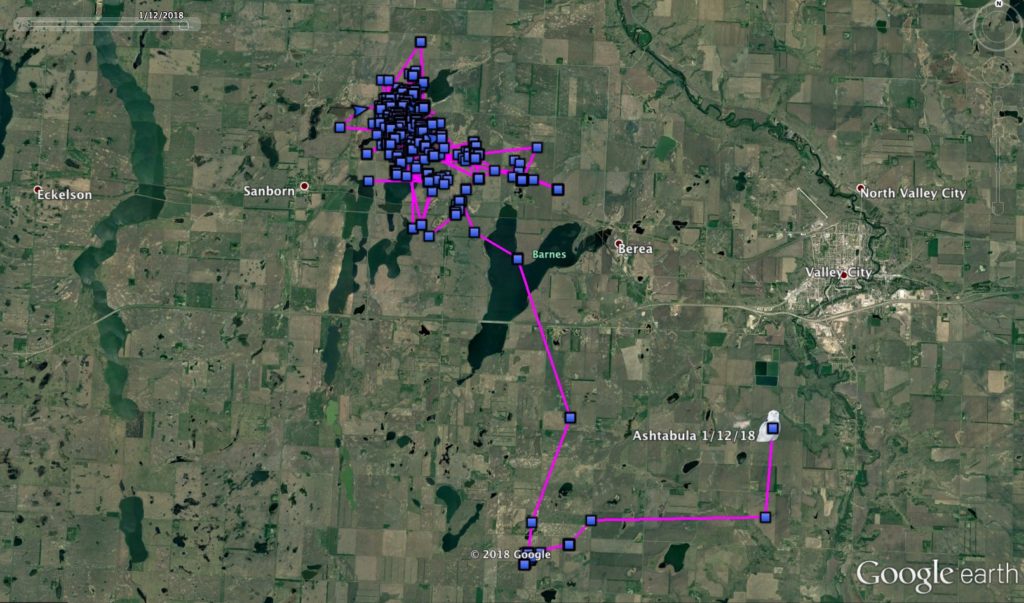 Ashtabula’s movements from the first week of December through Jan. 12. (©Project SNOWstorm and Google Earth)

In the wake of Higbee‘s loss, we have some exciting news in this update — great data from our new owls in Wisconsin, evidence that Chickatawbut probably nested last summer in the subarctic, and the unexpected return of Ashtabula.

Wait — Ashta-who? If you’re scratching your head and wondering why you can’t recall that particular owl, don’t worry. This is the first time we’ve mentioned him, because he seemingly vanished as soon as he was tagged more than a month ago.

One of our research goals this winter was to get more data from snowy owls on the Great Plains, where our colleague Matt Solensky from the U.S. Geological Survey’s Northern Prairie Research Station in North Dakota has been working with us for several years — he’s the one who tagged Dakota and Chase Lake in previous winters. 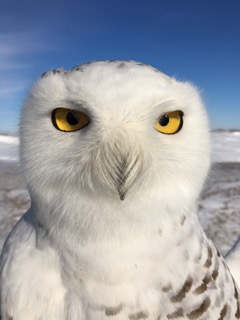 Ashtabula, prior to his release in North Dakota last month. (©Matt Solensky)

Matt got to work in November, scouting for early arriving snowies with the help of local birder Rick Bohn. In the final days of November Matt caught a couple of young males — one south of Crystal Springs, ND, and another near Medina at Stink Lake, one of Matt’s favorite walleye-fishing spots. Both owls were on the thin side, though, so after banding them and taking blood samples for later analysis, they were released without transmitters.

The first week of December, Matt shifted his attention to the fields and prairies around Sanborn, in Barnes County, ND. The November snows had melted, which helped in his search, and Matt soon found what appeared to be another male sitting in a soybean field. Matt set up his bownet and a bal-chatri (a wire cage with monofilament nooses to catch an owl’s foot) about 150 yards (137 m) from the owl, but the snowy was having none of it. After watching the lure pigeons for half an hour, it flew off.

“After mumbling a few expletives, I moved the trap so that it was south of him in the soybean field, then backed up my truck to watch,” Matt said. “About 40 minutes later he took flight and barreled into the bownet pigeon,” covering more than 700 yards (640 m) in seconds. To Matt’s relief, this bird — another juvenile male — was in excellent condition, weighing a robust 1,706g, with plump muscle mass in the chest — a great candidate for a transmitter.

Matt named the owl Ashtabula, for a large impoundment on the Sheyenne River just north of his capture site. Trouble was, Ashtabula seemed to pull a vanishing act, missing his scheduled check-ins week after week. Matt was able to find him repeatedly, so we knew the owl was OK, and Matt tried on several occasions to retrap him and remove what we thought was a faulty transmitter.

But on Friday night (Jan. 12), who should phone home but Ashtabula, who uploaded more than 900 GPS locations — his whole, unbroken movement history since he was tagged. He’d spent most of the preceding month northeast of Sanborn, in an area that apparently had poor GSM cell coverage. But Jan. 11-12 he moved about 10 miles (16 km) south and east, below Valley City, ND — and into an area with decent cell coverage. 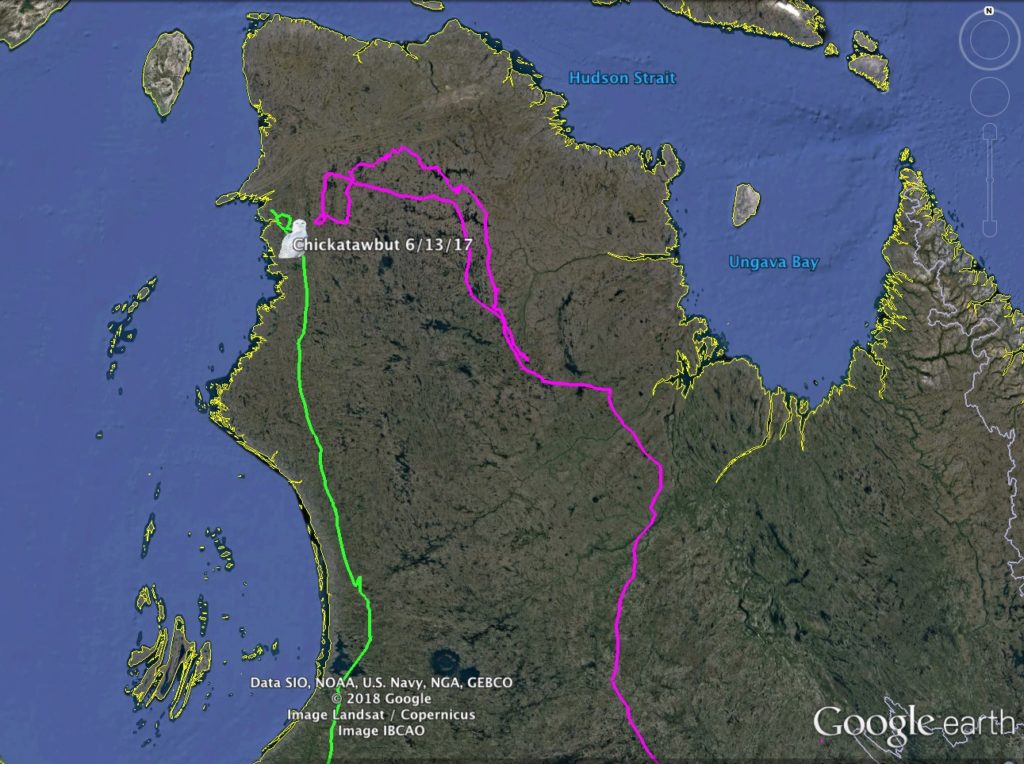 The northbound migration route of Chickatawbut (green) and Wells into the same general region of the northern Ungava Peninsula last summer. (©Project SNOWstorm and Google Earth)

We also got some great data from Chickatawbut, who is in southern Quebec along the St. Lawrence, about midway between Montreal and Quebec City. Her transmitter’s voltage rose enough to send up more than 1,800 stored GPS points — not the whole batch in her memory banks, but all of her northward migration and the beginning of summer. It was enough to show that by mid-June, she was highly localized in an area two-thirds of the way up the Ungava Peninsula in northern Quebec, about 28 km (17 miles) inland from Hudson Bay. 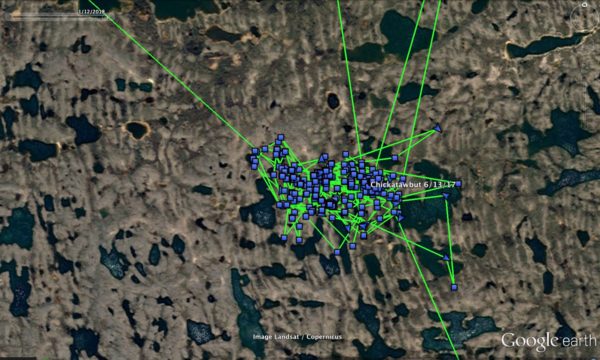 A nest for Chickatawbut? We’ll need the rest of her summer data to be sure, but she moved very little between June 2-15, remaining within a square kilometer or so. (©Project SNOWstorm and Google Earth)

We’ll need to see the rest of her summer to be sure, but it certainly looks as though Chickatawbut at least started to nest — like Wells, whose nest site was 184 km (114 miles) to the east of her. We should get more data from Chickatawbut soon, and as always, once the backlogged data is caught up, we’ll be getting this winter’s current data a couple times a week.

Things are looking good in Wisconsin for Badger and Arlington. Badger is showing a terrific liking for a line of utility poles that runs through her territory, as well as a farm building on which she often roosts. Arlington has moved around a bit more than Badger, and Friday night was close to the Columbia/Dane county line.

Gene Jacobs, who tagged Arlington and is trying to tag additional Wisconsin owls, had one under his bownet the other night, but it escaped before he could reach the trap — there’s many a slip ‘twixt the trap and the transmitter, when you’re working with big, strong birds, but Gene will keep trying.

We didn’t hear from our two Great Lakes owls at the Friday check-in. Hilton and Sterling are almost certainly out on lakes Erie and Huron respectively — Lake Erie is now 72 percent frozen, and much of southern Lake Huron is ice-fast as well, so there’s lots of room out of cell range for them to travel.  We know from previous winters how much snowy owls love being out on ice, far from land. 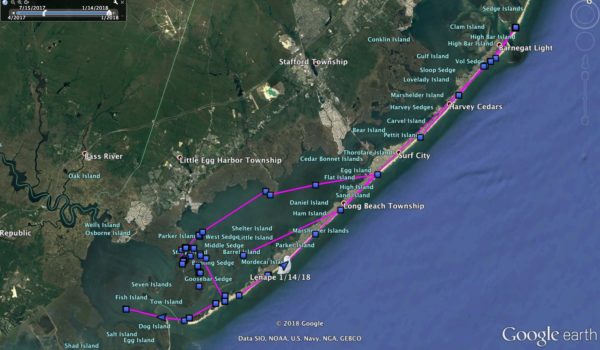 Island Beach, on the New Jersey coast, was also AWOL, but both he and Lenape (who did check in Sunday night) are both suffering from low battery voltage, since this is the most challenging time of the year for solar recharge.* Lenape has been the most restless of all our owls this winter, moving up and coast from northern New Jersey to southern Virginia and back. Since the big coastal storm Jan. 4, he’s been moving up and down Long Beach Island, from Holgate and Great Bay Boulevard Wildlife Management Area in the south to Barnegat Inlet in the north.

We also received some great photos of Lenape from photographer Rob Raker, who shot them at Chincoteague NWR on the eastern shore of Virginia in mid-December. This was during a period when Lenape’s unit was also suffering from the mid-winter, low-sun blues and had gone to sleep for a few days, so it’s great to have Rob’s photos fill in some details on where the owl was during a period when Lenape was ranging hundreds of miles. 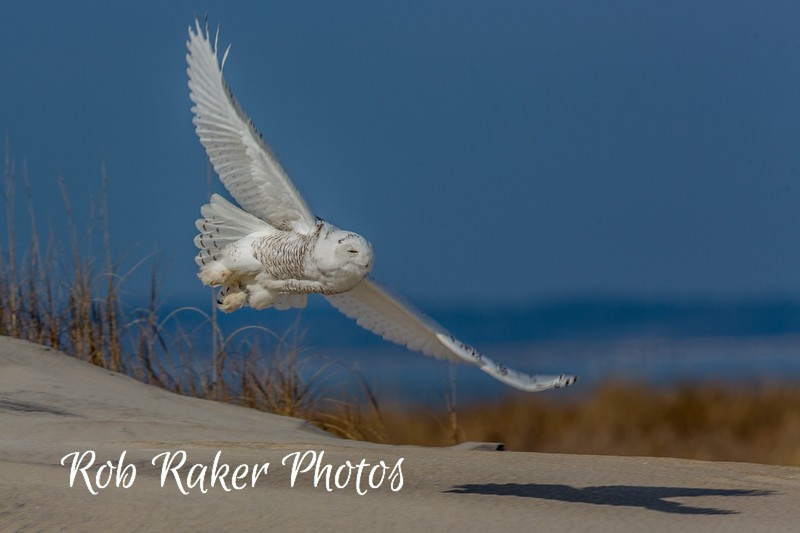 Lenape at Chincoteague, Virginia, in mid-December, during his prolonged travels up and down the mid-Atlantic coast. (©Rob Raker)

Finally, Hardscrabble remains near Baltimore’s 2016-17 winter territory near Kinburn, Ontario. We get small batches of backlogged data from him every week as his battery voltage recovers, but his is an older model of transmitter, and will take a bit more juice to send large volumes of data than Chickatawbut or Wells. But our Ottawa colleagues Dan and Pat LaFortune have been keeping an eye on him these past weeks, and send along photos when he’s perched close enough to the road for pictures, like this shot that captures the frigid beauty of a mid-winter evening. 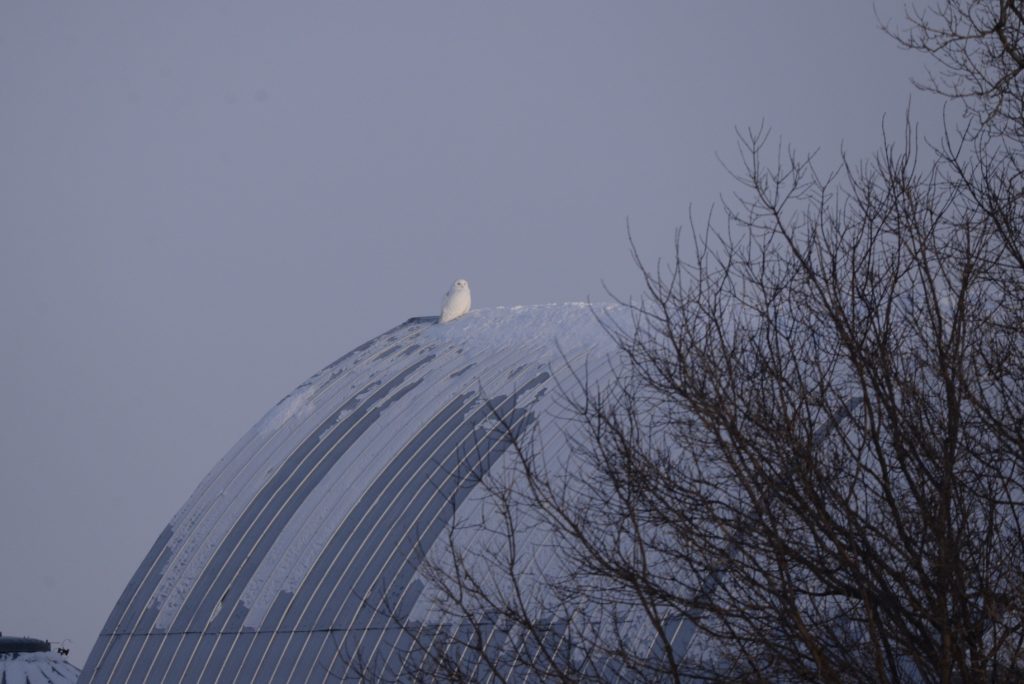 In the soft twilight of evening, Hardscrabble surveys the Ottawa River valley from the roof of a farm building on Jan. 2. (©Daniel LaFortune)

Back to Amherst
Losing Higbee

6 Comments on “Welcoming (Back) Ashtabula”