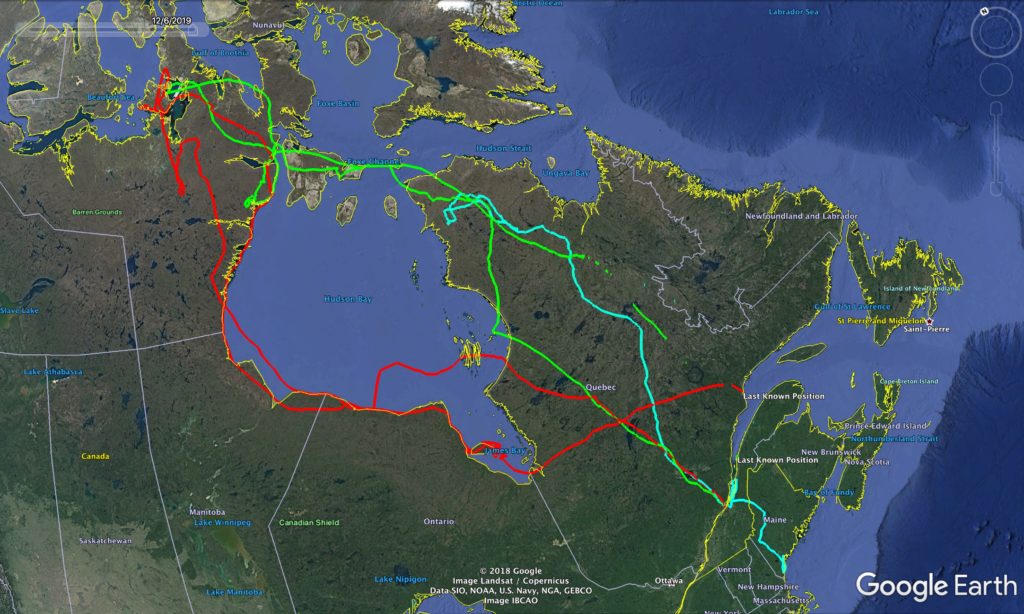 It’s been a busy week at Project SNOWstorm, with a shuffling of the deck among our tagged owls, some closure on an early loss, and the return of very familiar name.

First, though, I want to acknowledge what many of you have noticed — we still don’t have maps posted for our four newest owls. That’s because of a systems glitch that we’re working hard to fix. The good news is the maps for all previously tagged owls like Stella and Pettibone are updating with new locations automatically, as they should — it’s just frustrating that the best we can offer at the moment for new owls (Yul, Medina and Pearl) are static maps here on the blog. Fingers crossed that we resolve the problem with the new maps soon.

The big news was the reappearance of Wells, an adult female we first encountered in Maine in January 2017 after she was captured by USDA Wildlife Services at the Portland Jetport, tagged by our colleagues at the Biodiversity Research Institute and relocated away from the airport. The past two winters she’s used a fairly small territory along the fringes of Québec City and the urbanized north shore of the St. Lawrence River in southern Québec. 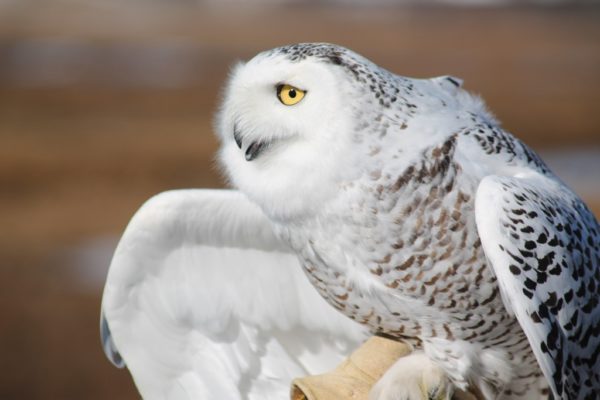 Wells, just before her release at Rachel Carson NWR in Maine in 2017. (Bri Benvenuti, USFWS)

She first checked on Nov. 23, just a data-less “I’m here” transmission showing her on the north shore of the Gulf of St. Lawrence, about 65 km (30 miles) southeast of Sept-Iles, QC. Her battery was badly depleted; this is becoming typical for Wells, who tends to linger late into the early winter up in the dark subarctic before making a rapid movement south.

On Dec. 6, her unit having recovered some of its solar recharge (and she having crossed to the south side of the river), Wells sent thousands of backlogged GPS locations tracing her movements since she left cell range on April 30 this spring while migrating north. And a fascinating story it was. Her first summer as a tracked owl, in 2017, she moved no farther north than the Ungava Peninsula in northern Quebec, but last summer — and again this year, as it turns out — she flew another 1,300 km (825 miles) northwest into the central Canadian Arctic.

By June 2019 Wells had flown as far northwest as the Boothia Peninsula and King William Island, where three other SNOWstorm owls — Stella, Pettibone and Woodworth — were also spending the breeding season. She then backtracked about 800 km (500 miles) southeast, and spent the remainder of the summer on along Chesterfield Inlet at the northern edge of Hudson Bay. As with our other three owls from that region, she showed no signs of nesting, and you may recall that reports we had from researchers at Rankin Inlet, just south of her, suggested a complete lack of snowy owl nesting in that part of the Arctic this summer.

Wells remained there until the end of October, then island-hopped across the northern margin of Hudson Bay and across Québec in early November, flying 2,500 km (1,500 miles) in a few weeks. At last report she was on the south shore of the St. Lawrence, opposite the famed birding location of Tadoussac, QC, and only about 195 km (120 miles) from Québec City. 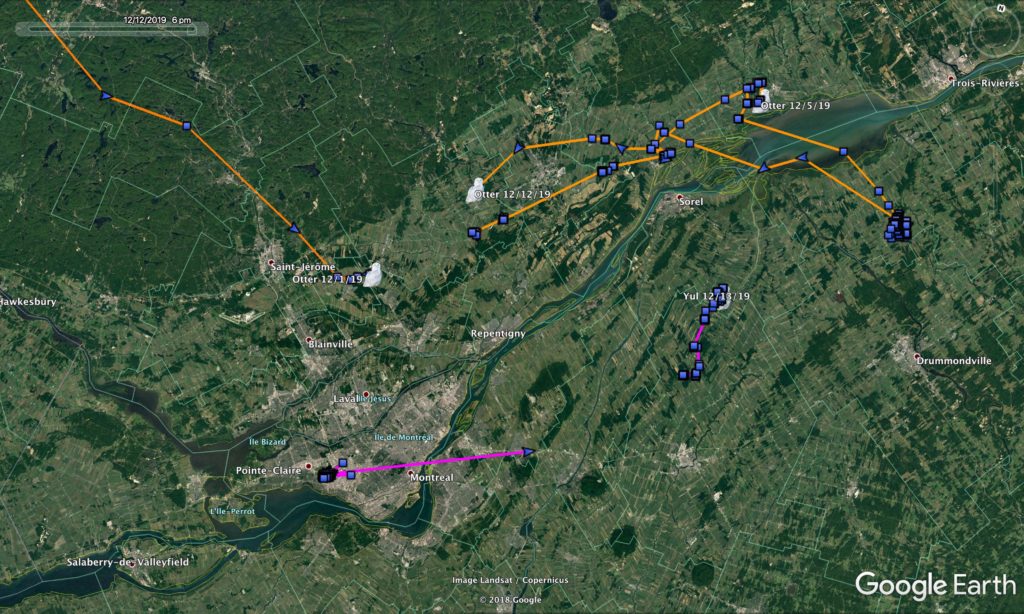 So far, so good: Yul (purple, including her vehicle lift away from the airport) is staying this time near her relocation site, while Otter (orange) has been roaming a bit more widely. (©Project SNOWstorm and Google Earth)

Owls in the East

Confirming what we suspected, a necropsy performed on Montréal, who was found Dec. 3 along a busy highway in Saint-Jean sur Richelieu, showed that she was killed (most likely instantly) by a vehicle collision. While her hybrid GSM/Argos transmitter is still working, it suffered some damage to its solar panels, and will be refurbished at CTT so we can redeploy it on another owl this winter.

Yul, the other airport relocation snowy from the Montréal-Trudeau airport — who was moved but immediately returned to the airfield — was retrapped by Falcon Environmental Services and re-relocated to farmland about 80 km (50 miles) east of the city and across the St. Lawrence, where we’re pleased to say she remains…at least for the moment.

Finally in the East we have Otter, another bird (an adult male this time) with hybrid transmitter. In the past week or so he moved well east of Montréal, crossed the St. Lawrence to the county of Nicolet-Yamaska on the south shore, then flew back north again. As of Dec. 12 he was in the county of Montcalm, just north of the village of Saint-Jacques, an area with lots of open farmland and the very long, very thin fields that date to the French colonial period. 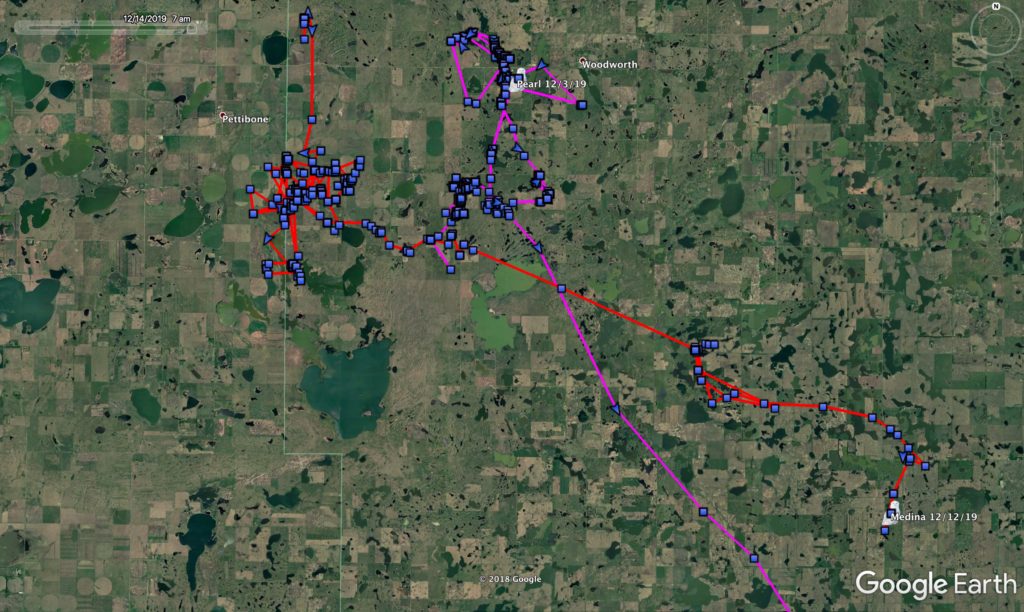 Owls on the Prairies

Medina, who was tagged last month by Matt Solensky, had been staying close to original location near Woodworth, ND. But on Dec. 11-12 she flew about 15 miles (22 km) southeast and has been a few miles north of Cleveland, off I-94 in Stutsman County.

Pearl, on the other hand, put on her traveling shoes in a big way and headed southeast, flying 180 miles (290 km) into northeastern South Dakota. By Dec. 10 she was along the edge of the Coteau des Prairies, a low, rumpled plateau that rises from the flat prairie of the Red River of the North to the east, along the Minnesota border. This part of the coteau is within the Lake Traverse Reservation, home of the Sisseton Wahpeton Oyate branch of the Santee Dakota. 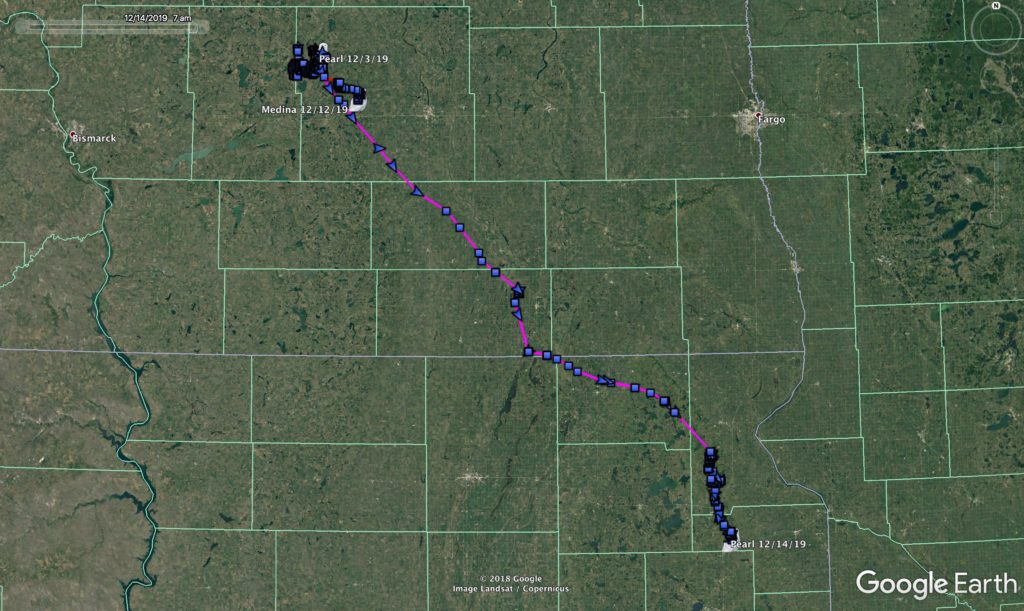 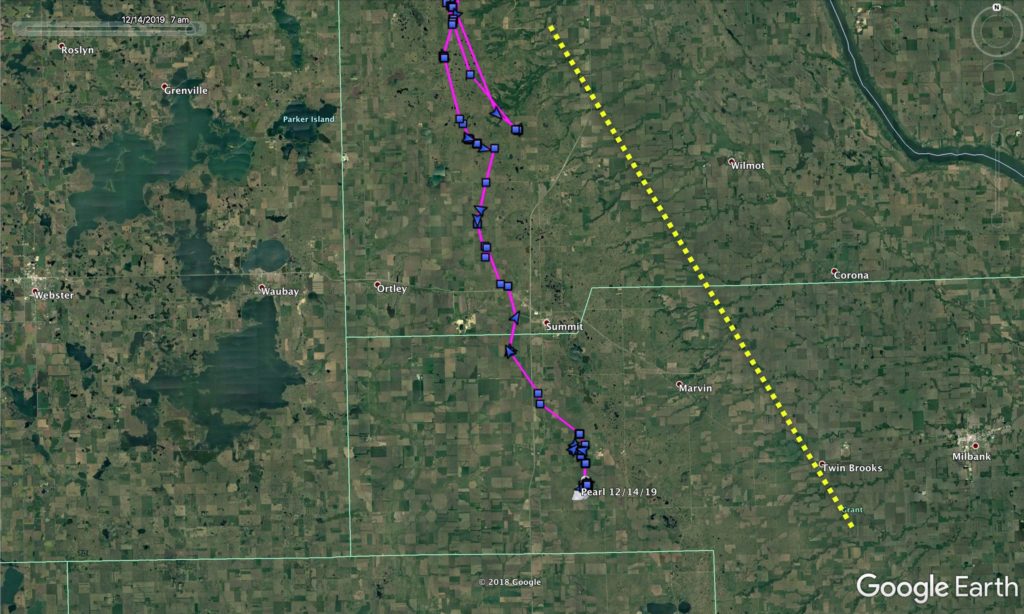 Pearl is currently on the low plateau known as the Coteau des Prairies, which runs for about 200 miles along the western edge of the Red River valley — the uplands just west of the yellow line. (©Project SNOWstorm and Google Earth)

Farther west, Pettibone remains just south of the Quill Lakes in Division No. 10 in southern Saskatchewan, about 135 km (84 miles) north of Regina. Similarly, Stella — after her lightning in-and-out visit to South Dakota a month ago — seems to have settled in, at least for now, along Whitewater Lake,  just north of the forested Turtle Mountain plateau on the Manitoba/North Dakota line. (Turtle Mountain, for returning SNOWstorm fans, is the area where Woodworth spent a lot of time last winter.)

Speaking of Woodworth, we hope to hear from him after his initial transmission last month of all of his spring/summer/fall data, but he was far enough north at the time that it may take a while for his battery to recover from the drain of a long transmission.