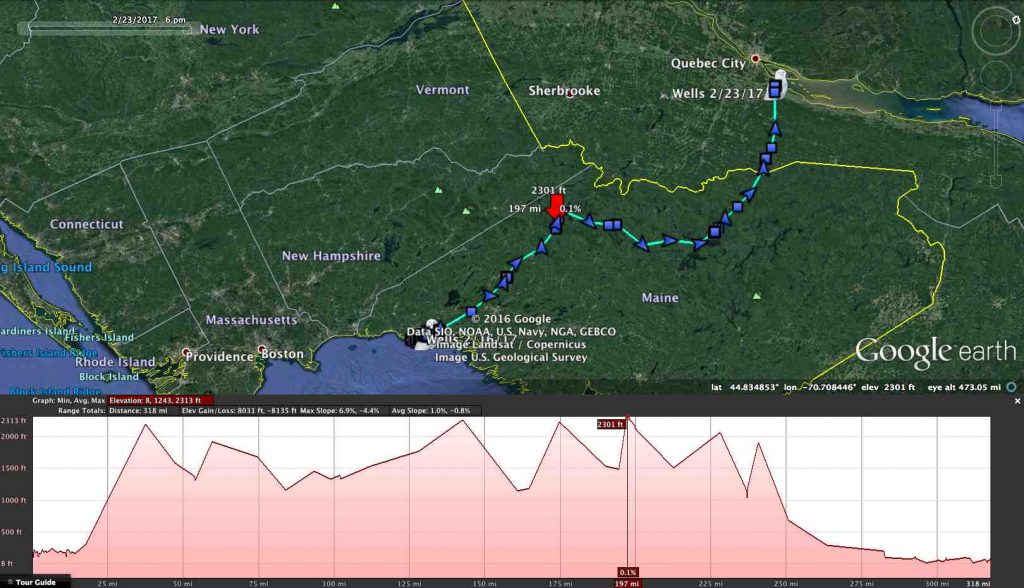 Wells’ flight to the north, from coastal Maine to the St. Lawrence valley in Quebec. (The altitude chart shows absolute elevation above sea level, not altitude above ground level.) (©Project SNOWstorm and Google Earth)

If you live anywhere in the Midwest or East, we don’t have to tell you that the past week was bizarrely warm, with record-high temperatures across a huge swath of the country.

That weather — coupled with the longer days — may be having an effect on the snowy owls. And one in particular, because Wells has left the building.

After spending the past month on the Maine coast, having been moved from the Portland Jetport, last week this adult female made a beeline north across the state, winding up in the flat farmland along the south shore of the Gulf of St. Lawrence in southern Quebec.

Wells headed out after dusk on Feb. 18, stopping for a few hours — uneventful ones, fortunately — at her dangerous old stomping grounds at the Portland Jetport. Before daybreak, though, Wells flew north again, and by daybreak she was resting near West Paris, Maine, about 55 miles/88 km northwest of her starting point.

The night of Feb. 19-20 she flew off, wasting no time and winging north is typical snowy owl fashion — flying for an hour or more at a time, then stopping for a short rest, than another 60- or 90-minute flight, usually staying within a few hundred feet of the ground. Her average flight speed was 21 knots (24 mph/39 kph) — one of the exciting elements of the data we collect is flight altitude and speed, something not available for snowy owls until this project began.

In this stop-and-start fashion Wells migrated north to the mountainous Rangley Lake region in western Maine, stopping on the frozen surface of Mooselookmeguntic Lake, then kicking to the northeast to Flagstaff Lake (another stop on the ice), and then on to Moosehead Lake around dawn, just beyond which she pulled up for the day.

As evening came on Feb. 21, Wells lifted off and flew across the border into southern Quebec, where the landscape became steadily more open and agricultural as she traveled the 75 km/46 miles to the St. Lawrence. By daybreak she was in a heavily farmed region just across the river from île d’Orléans, near the town of La Durantaye. 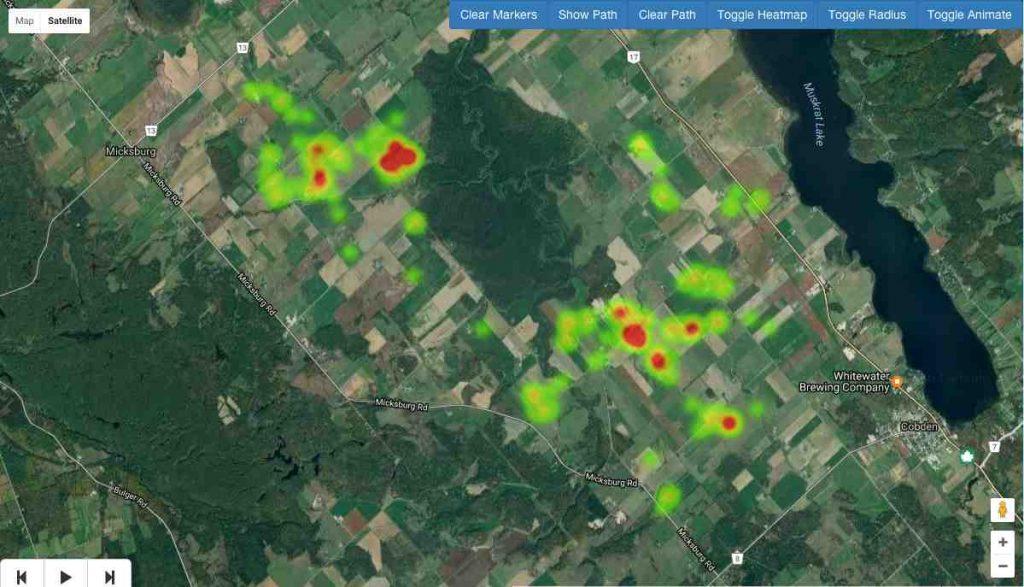 A “heat map” showing the areas Hardscrabble has been using most heavily this winter on his Ontario territory. (©Project SNOWstorm and Google Earth)

What about the others? Oswego didn’t check in — her voltage was pretty low last week, a function of the persistently cloudy weather along Lake Ontario all winter. As of Friday, though, Dakota and Hardscrabble were still plunked down where they’ve been all winter; here’s a heat map that shows Hardscrabble’s activity areas this winter near Cobden, ON. 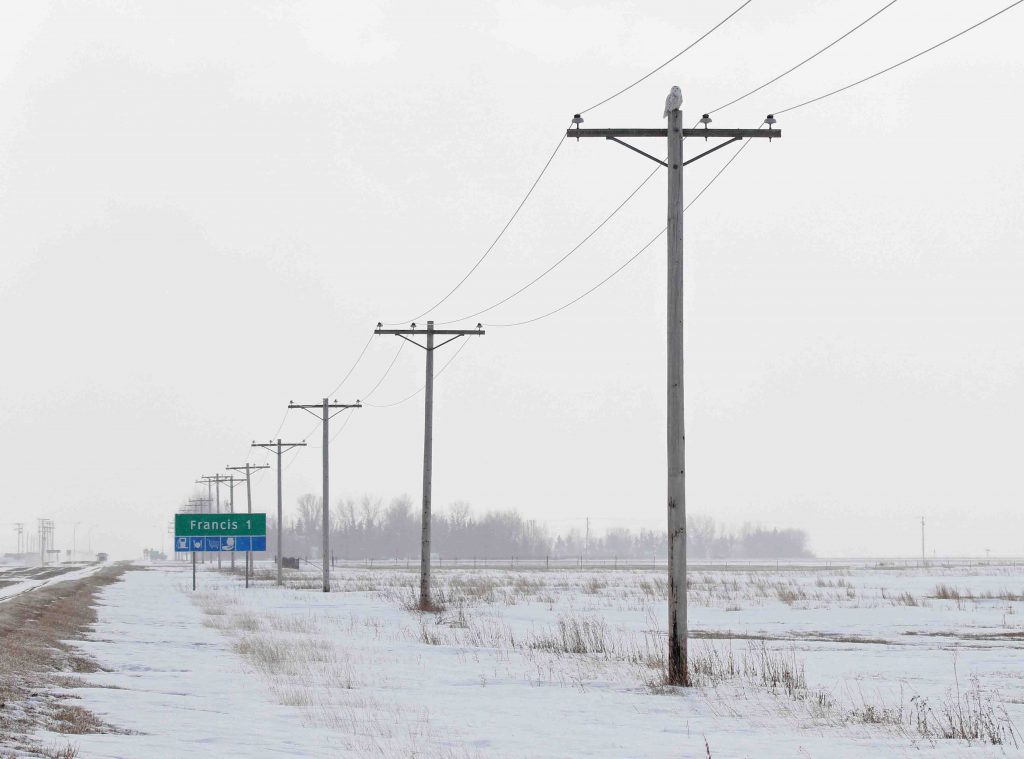 Dakota, perched on a utility pole, is the official welcoming committee in Francis, SK. (©Val and Kim Mann)

Meanwhile, sisters Kim and Val Mann got some great photos of Dakota this weekend, and of the Saskatchewan landscape where she’s been wintering. Baltimore remains near Kinburn, ON, as well — though for how long, we’ll have to see. His location is known from observations alone, since his transmitter has failed. 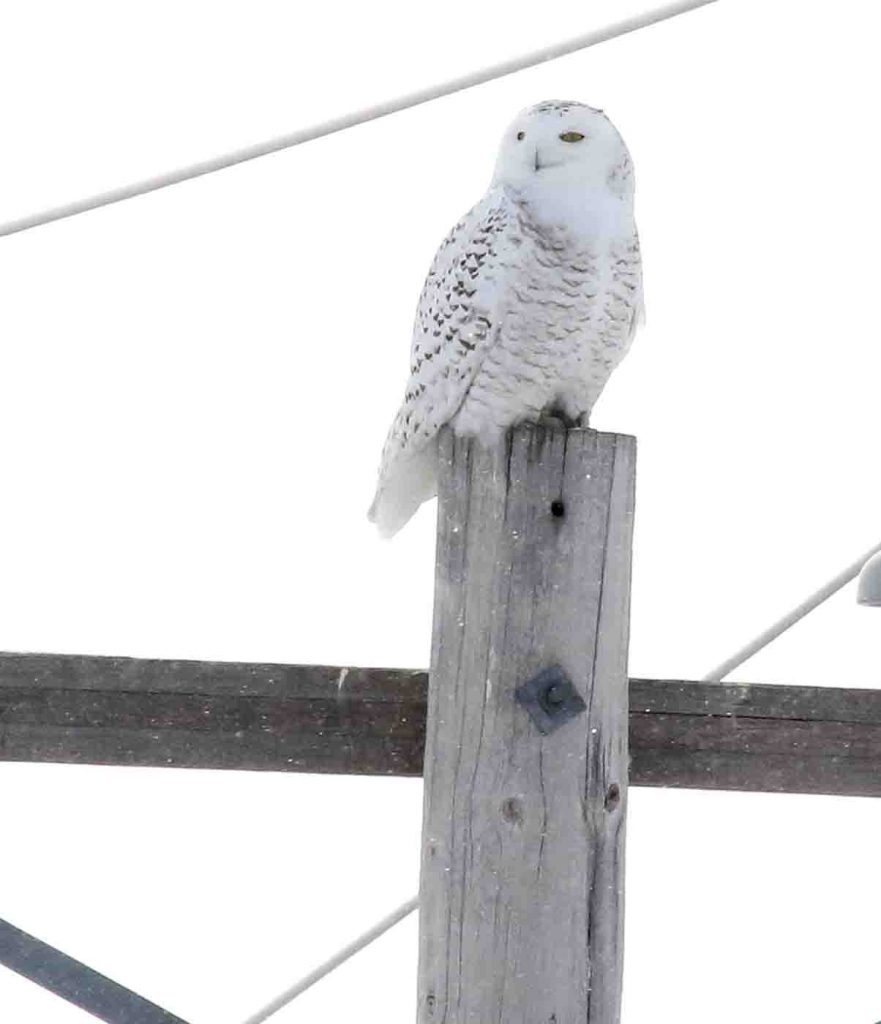 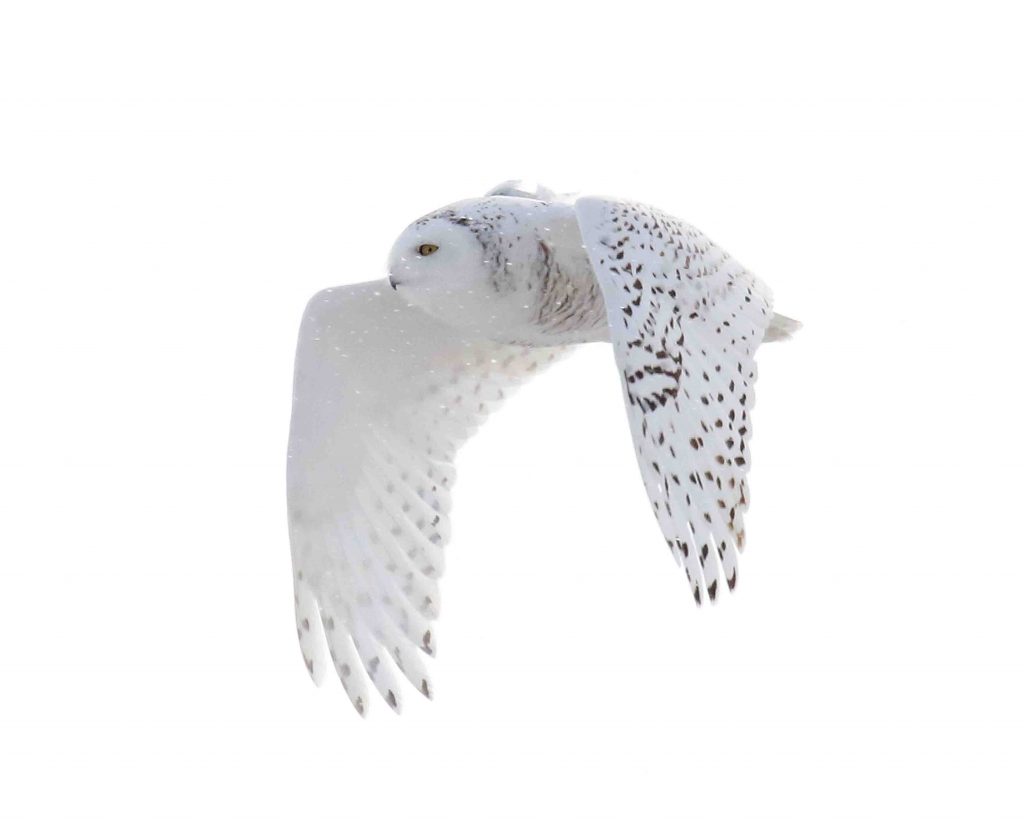 Her transmitter riding perfectly, Dakota heads out for a snack. (©Val and Kim Mann)