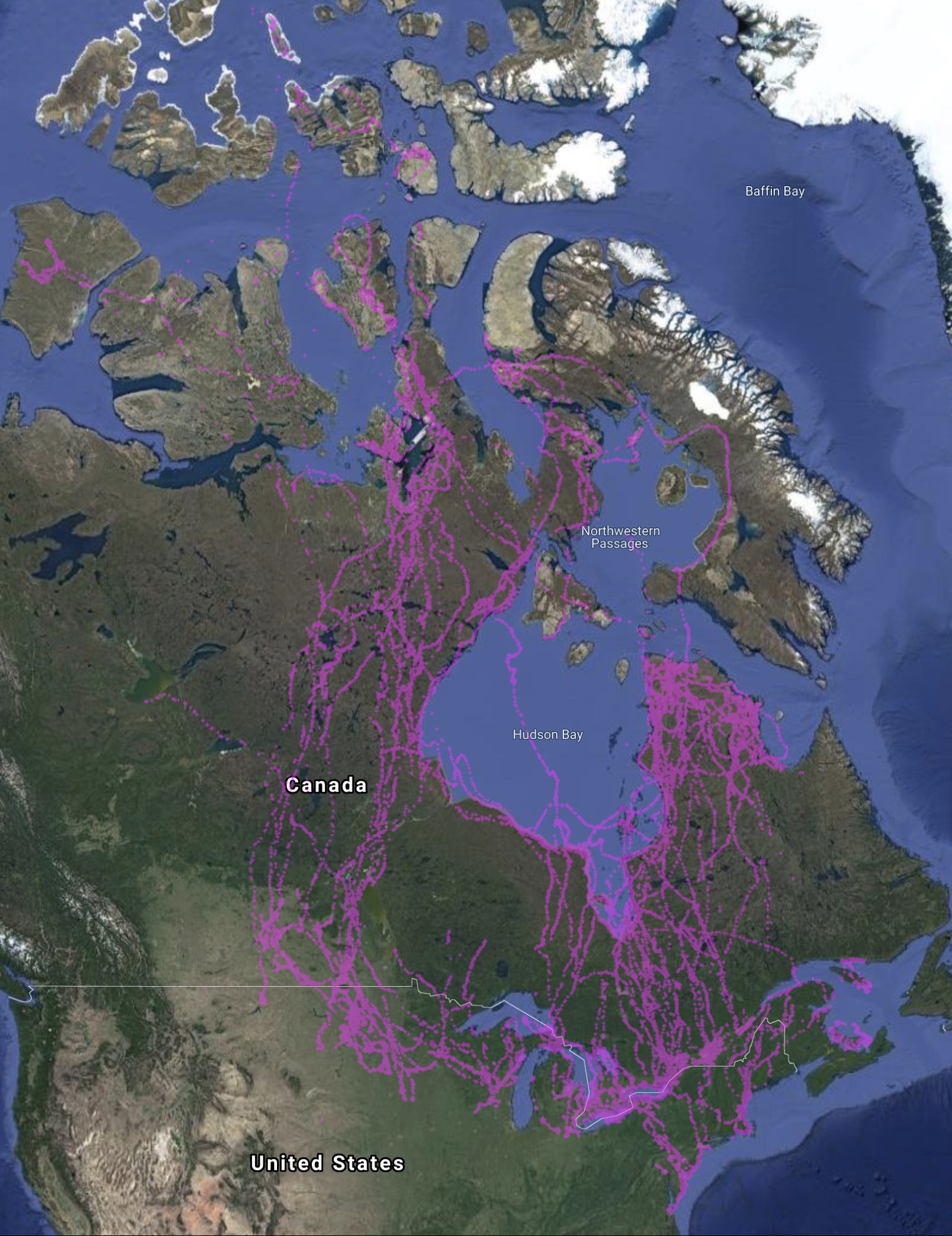 Since we started Project SNOWstorm seven years ago this month, we’ve tracked more than 90 snowy owls across 28 states and provinces, as far south as Virginia and northwest clear to the edge of the Arctic Ocean — the last land until Siberia.

Some of the owls met unfortunate ends relatively soon after we began to track them, most often the victims of vehicle collisions. But others we’ve tracked for years, across tens of thousands of miles. In each case, short or long, the moving bird unspools a line of highly precise GPS locations in its wake, regularly transmitted to us.

Our colleague Dave Brinker, one of the original masterminds of SNOWstorm, pointed out the other day that our combined dataset is rapidly approaching a remarkable threshold  — nearly half a million GPS locations, one of the largest — perhaps thelargest — such movement data sets in the world for snowy owls.

Here, for the first time, is a glimpse at what all of that data looks like — a tapestry of migration woven across the a vast area of northern North America, from the Great Plains to the Atlantic and all the way to the Arctic.

This composite map shows a couple of interesting things. Our owls seem to be following two major routes north and south — one from the Ottawa/St. Lawrence river valleys to James Bay and (mostly) up the eastern side of Hudson Bay, primarily to the Ungava Peninsula; or from the Plains and western Great Lakes up through Manitoba and Saskatchewan to the central Arctic. In both cases, they largely avoid crossing the huge tracts of boreal forest in Quebec and Ontario — and the few owls that were last detected  entering those regions never reappeared, suggesting that such an alien, forested environment may be a dangerous one for an open-country tundra bird.

(By contrast, our colleagues at  Laval University in Québec, who have been satellite-tagging adult snowy owls on the breeding grounds on Bylot Island in the eastern Canadian Arctic, have found that many of those owls take a more easterly route south, along the coast of Labrador to Newfoundland and the eastern Maritimes. Others have moved to Greenland for the summer. None of our snowies have taken those routes, perhaps because they originate farther west.)

If you’d like to explore this composite data yourself, you can. Besides our interactive maps for each individual owl, all of SNOWstorm’s movement data is archived on Movebank, a free, online platform for animal movement data — birds, mammals, fish, reptiles, any organism that can be tagged and tracked.

Movebank is hosted by the Max Planck Institute for Animal Behavior in Germany, in cooperation with the North Carolina Museum of Natural Sciences, Ohio State University and the University of Konstanz in Germany. At last report, nearly 2.5 billion locations from about 1,000 species and more than 7,700 research projects have been archived with Movebank — much of it accessible to the public and other researchers for analysis and viewing. (The scientists who produce the tracking data can decide what level of access to allow to their findings.)

We’ve made our data accessible at a pretty open level, and you don’t even need to  sign up for a free Movebank account to play around with it, although creating an account will give you more flexibility and tools. And while you’re there, see what other snowy owl researchers have been up to — or you can choose to explore the wanderings of right whales, steppe eagles, lake trout, sea turtles, Atlantic salmon, ring-tailed lemurs, fishers, ringed seals, Azores storm-petrels, Burchell’s zebras…the list is almost endless. Have fun!

12 Comments on “What Does Half a Million Owl Locations Look Like?”