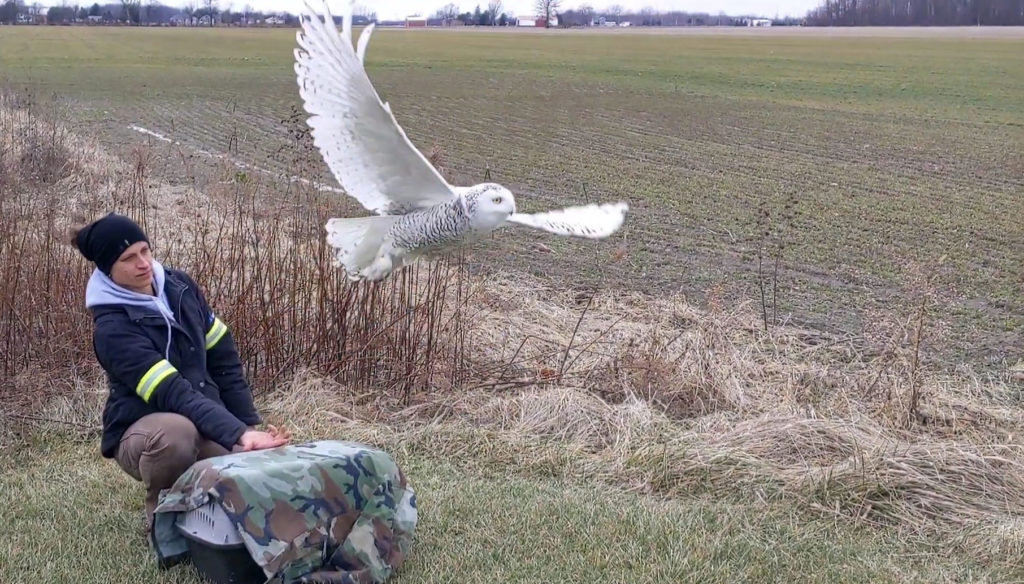 Off she goes, back on the grid after three years. (©Black Swamp Bird Observatory)

I’m not sure where to start.

Maybe with an apology; the lapse in recent updates hasn’t been a reflection of a lack of news, but a lack of time. As we’ve noted before, everyone involved with SNOWstorm is a volunteer, and sometimes our paying jobs get in the way. In my case, a couple of big deadlines, combined with a stretch of time out of the office and offline, kept me from sharing what’s been going on in a timely fashion.

And there has been a lot happening. This will be the first of several posts in the next couple of days, introducing several new owls and giving updates on previously tagged birds. But let’s start with one of the more remarkable sequences of events in our six years of snowy owl work.

Wolverine’s transmitter is programmed to connect on Tuesday, Thursday and Sunday evenings to send data. On Sunday, Jan. 5, he was up near Flint, but by Tuesday the 7th he was heading back towards Detroit. That was the first “uh-oh” moment, as we worried that he was beelining back to the airport. That evening he was on the roof of a big General Motors facility in Pontiac, MI, and we were keeping our fingers crossed that when he checked in two nights later he wouldn’t be back at DTW.

Instead, the news seemed even worse. Thursday night, Jan. 9, Wolverine’s transmitter sent 50 GPS locations — all from a street corner just off I-75. That usually means a dead or injured owl as a result of a vehicle collision. “Uh-oh” had become “Oh, no.” 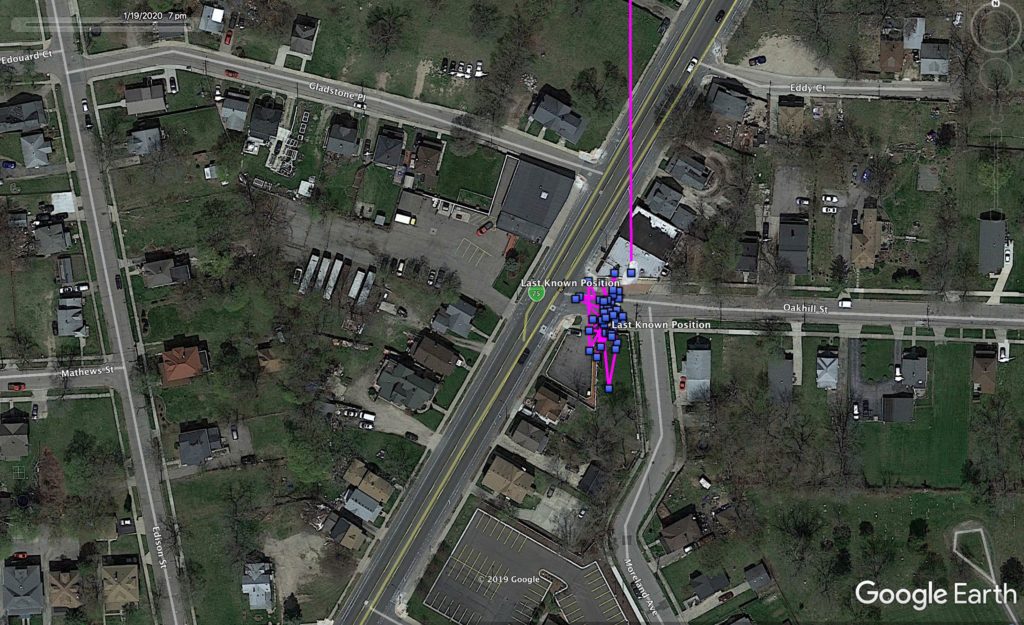 The next morning, as soon as she was able, Selena raced up to Pontiac — where, to her surprise and ours, she found Wolverine’s transmitter lying under a tree, perfectly intact, but no sign of the owl, alive or dead, nor any suggestion (like a scattering of white feathers) of an accident.

What’s more, when she got back to the airport, there was Wolverine, sitting on his favorite perch. Surprise, puzzlement and relief combined in equal measure.

Only Wolverine knows for sure, but it appears this owl was able to work loose one of the knots on the Teflon ribbon harness and drop the transmitter. This is the first time in more than 80 owls that we’ve had this happen. Mark, a retired Ohio Department of Natural Resources biologist, is extremely experienced at fitting large raptors like bald eagles with transmitters. It may be that Wolverine was just unusually persistent, and found an unexpected weak link in the harness.

In any event, Selena went back to trying to retrap him. He proved cagey, but last Friday morning, Jan. 17, she texted me a photo of a snowy she’d just caught at the airport. Ah, I thought, got him at last. But with the photo was a message: “Not Wolverine. Even better. It’s Buckeye.” 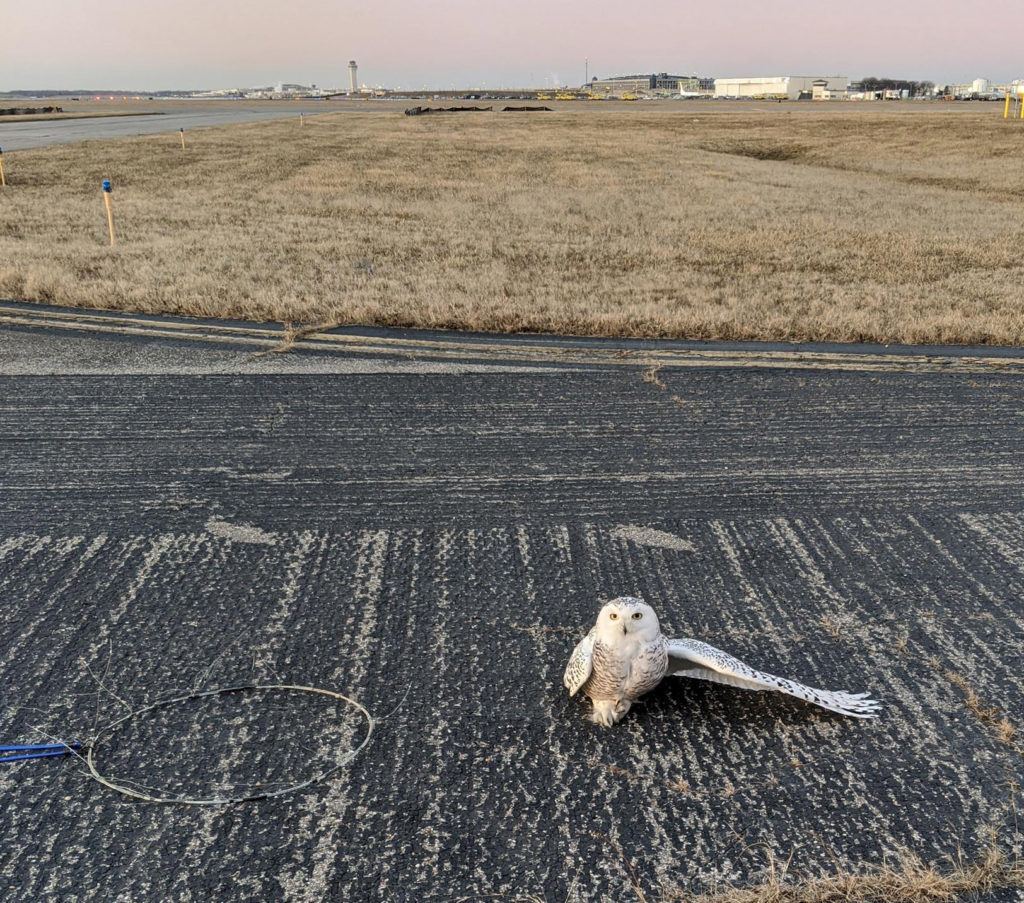 “Not Wolverine. Even better,” said the message. Buckeye just after her capture at Detroit Metro Airport. (©Selena Creed)

Buckeye, you’ll remember, is the old adult female originally tagged in 2015, which Selena caught Christmas Eve at DTW. We’d hoped to replace her old, non-functioning transmitter with a new one, but to our great disappointment we were unable to work out the logistics, and Selena moved the bird north of the city and released her, having removed the old unit. 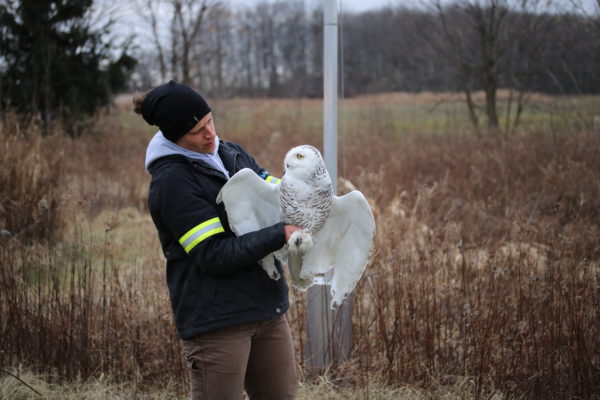 Now by weird good luck we had a second chance, using Wolverine’s jettisoned transmitter. By midday Mark had fitted Buckeye with the hand-me-down transmitter, and he and Selena had released her in northwestern Ohio where Buckeye was originally released in 2015. That winter Buckeye remained in the Ohio countryside, so we’re hopeful she’ll remain there again this year instead of risking death or injury at the airport. 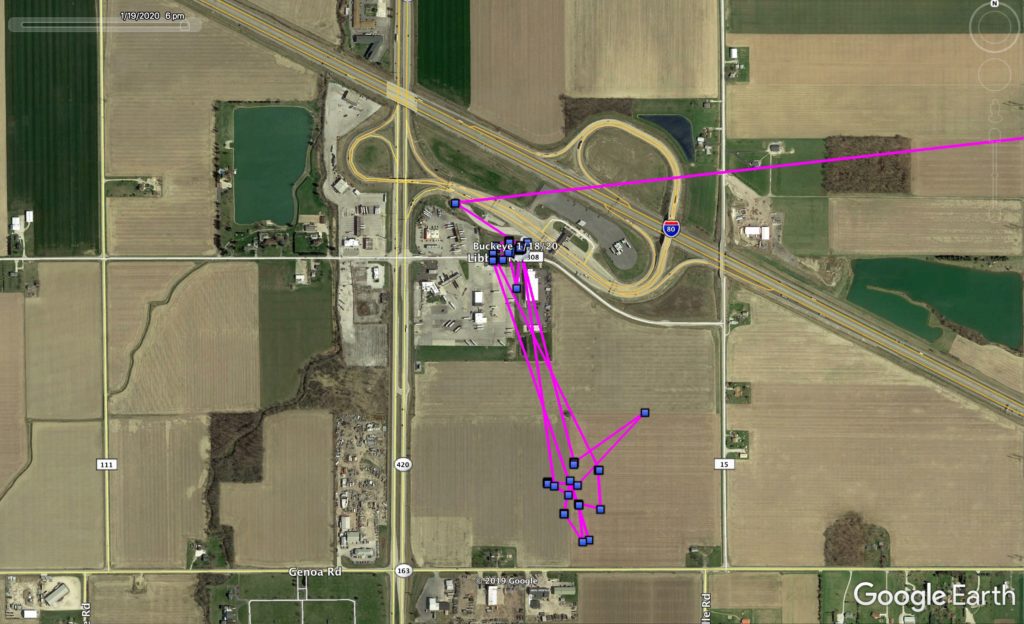 …and set up shop near a truck stop and toll plaza along I-80. (©Project SNOWstorm and Google Earth)

So, while this isn’t what we had in mind when we tagged Wolverine, it seems like an extraordinary gift that it worked out like this. We’re all excited to be again tracking an owl like Buckeye with a long, known history with us. Wolverine’s movements are shown on his map, and we’ll shortly be linking Buckeye’s newest data to her 2015-16 data on her map page. And Selena is still hoping to retrap and retag Wolverine, who has been appearing and disappearing around the airport in recent days.