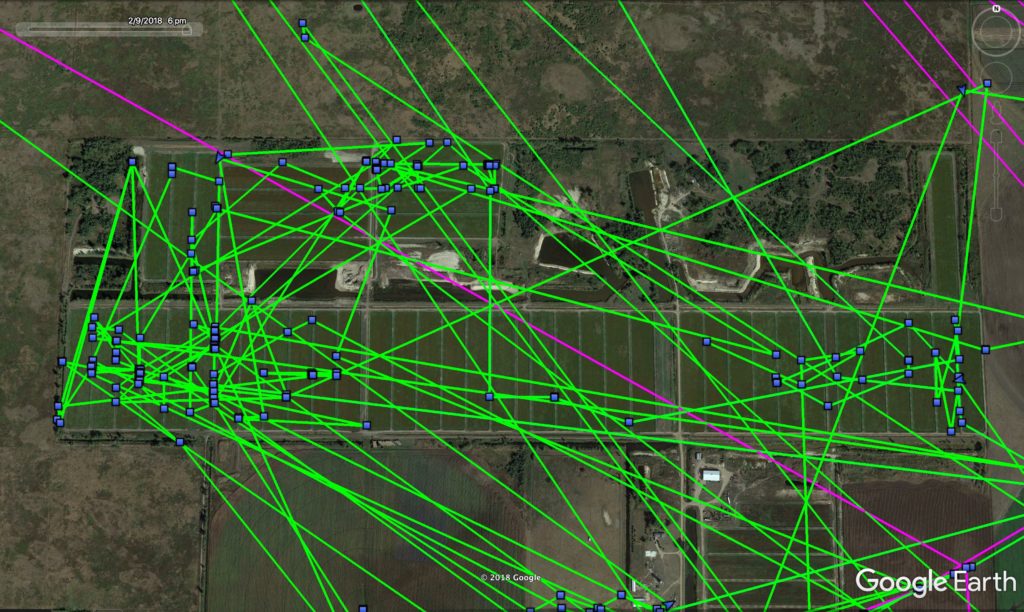 Austin has been hanging around a commercial cranberry operation lately. (©Project SNOWstorm and Google Earth)

Time for a weekend update on our 2017-18 cohort — the largest we’ve had since our first winter four years ago. We’ll start west and work our way east, but it’s a lot of owls.

Ashtabula remains pretty faithful to his general territory near Sanborn, ND, and lately has been spending a lot of time roosting in a grove of mostly dead cottonwoods on a farm about 1.3 miles (2 km) northeast of town, and hunting some wetlands and sloughs just on Sanborn’s outskirts.

Austin and Bancroft are still using intertwined territories on the Buena Vista grasslands in central Wisconsin. Interestingly, this past week Austin has shown a fondness for series of commercial cranberry bogs. (Portage and neighboring Wood counties, where the birds are wintering, are among the highest-producing areas for the crop in Wisconsin, which in turn produces more than 60 percent of the country’s cranberries.) Their paths cross but not (and this is important) at the same times; they are pretty good at avoiding each other.

Farther south, Arlington continues to straddle the boundary of Columbia and Dane counties, just north of Madison. His core activity area remains near Madison Audubon’s Goose Pond Sanctuary and University of Wisconsin Experimental Farm, but he moves as much as 4.7 miles (7.5 km) in the course of a night, covering more than 3,000 acres (1,200 ha).

By contrast Badger, up in Outagamie County, WI, between Appleton and Green Bay, hasn’t used even a third that much space since she was tagged in late December. Her usual nightly activity area is more like 150 acres (61 ha), centered on a couple of farms where the hunting must be good.

In the U.P. of Michigan, Pennington and Pickford are giving us a better sense of their movements, a week after being tagged. Pickford, the juvenile female, continues to use almost exactly the same adjacent areas  occupied in the winter of 2014-15 by Whitefish Point and Chippewa, which together total about 250 acres (100 ha). That’s in contrast with Pennington, an adult male, who has moved southwest and northeast of the town of Pickford, shifting as much as 2.8 miles (4.5 km), and using an area thus far that encompasses 1,240 acres (500 ha). 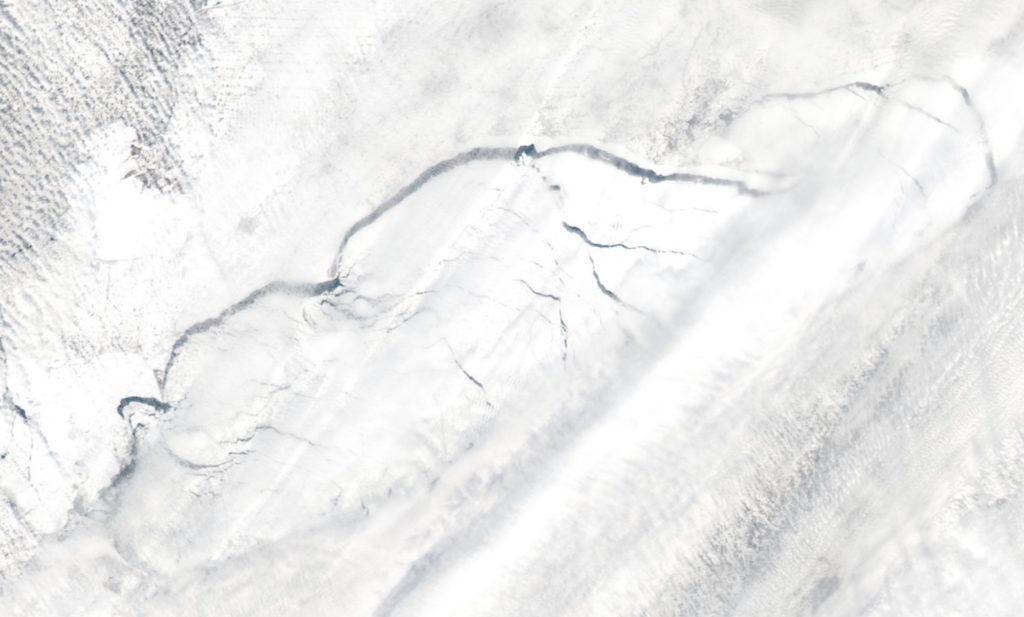 Lake Erie is almost completely frozen this winter, providing plenty of room for Hilton to roam out of cell range. (NOAA CoastWatch)

We hadn’t heard from Sterling in a while, but it appears she’s continuing her check-’em-off-the-list tour of the Great Lakes. Having been tagged on Lake Ontario in late November, she’s swung by Lake Erie, out to Lake Huron, and is now 8 miles (13 km) from Lake Michigan, in farmland just south of Holland, in Allegan County, Michigan. We haven’t heard from our other New York-tagged owl, Hilton, in a few weeks, but given that she’s been hanging out on Lake Erie, I’m not surprised — as recent NOAA satellite imagery makes very clear, the lake is almost completely frozen, and an ice-loving bird like Hilton can stay out of cell range for a long time under such conditions.

No changes from our two Amherst Island owls, Stella and Emerald. Stella’s been hugging the shoreline a bit more, not roosting by day out on Lake Ontario, which may reflect changing ice conditions in the bays around Amherst and Wolfe islands. (Because it is much deeper, Lake Ontario is far slower to freeze up than is Lake Erie, although the inshore waters near Amherst usually do to some extent.)

A bit north of that pair, Hardscrabble remains settled in the Ottawa River Valley near Arnprior, but if you check his map it will only take you through his late April movements — his transmitter is only sending us small bits of backlogged data, and we may have to try something to force the issue and get up to date with his data. Farther east, Chickatawbut is also stationary on her winter territory in the St. Lawrence River valley between Montreal and Quebec City. Nothing this week from Wells.

Sinepuxent is making tracks away from the beach. (©Allen Sklkar)

Down on the New Jersey shore, we didn’t get transmissions from Lenape and Island Beach, likely a voltage issue. Sinepuxent, our new bird on the Maryland coast, has been flushed repeatedly by birders and photographers at Assateague Island State Park; just before dusk Friday, SNOWstorm team member Steve Huy (who tagged her) watched as two photogs with big lens crept up on her from one direction, while another guy circled behind in the dunes trying to get a cell-phone photo. So perhaps it’s not surprising that after dark that same evening, her last location was 26 miles (42 km) northwest of the island, winging through southern Delaware at 48 mph (77 kph). Everyone has their limits. 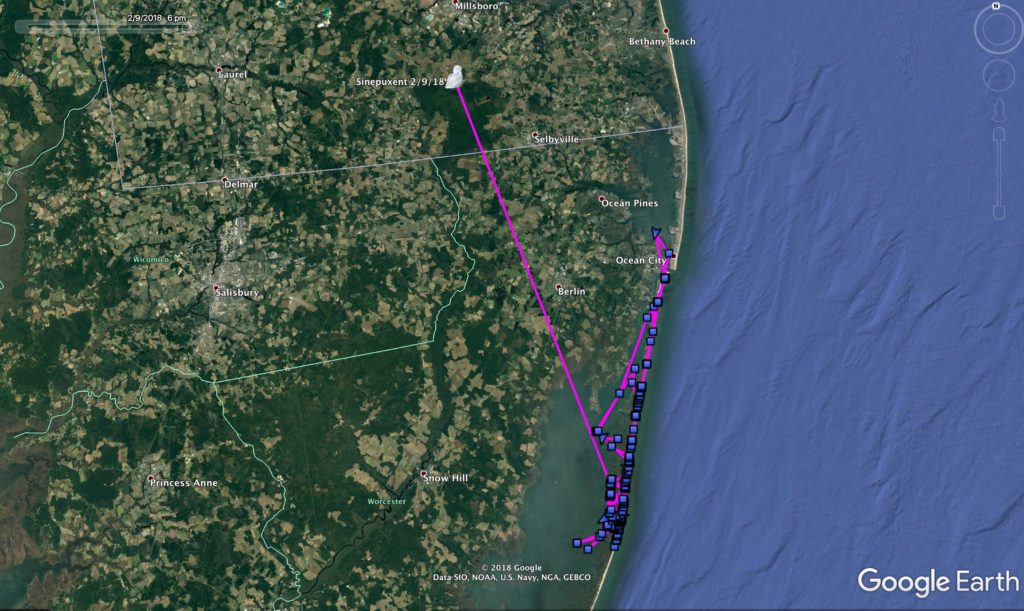 Maybe pushed around the beach one too many times, Sinepuxent was heading inland Friday evening. (©Project SNOWstorm and Google Earth)