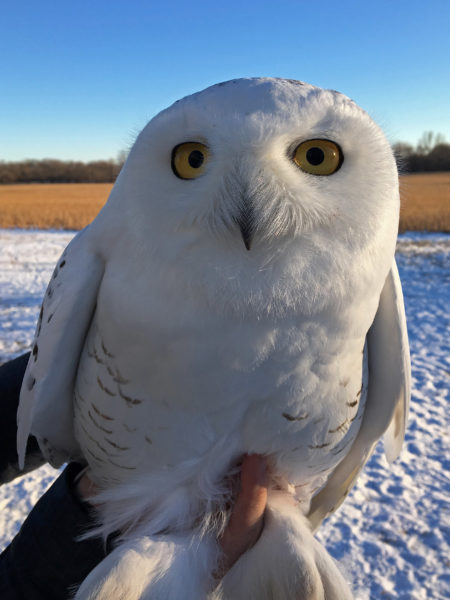 Woodworth, a second-year male, is the latest tagged snowy on the Great Plains of eastern North Dakota. (©Matt Solensky)

One of our goals this winter is to get more movement data on snowy owls in the Great Plains, to complement the larger data set we have for the Great Lakes and Northeast — which is we’re especially pleased that our colleague Matt Solensky just tagged the first owl of the 2018-19 season in eastern North Dakota.

“Woodworth” — named for a nearby town — is a second-year male, his age evident from the pattern of fresh, new flight feathers mixed with a lot of faded, retained juvenal feathers from his first plumage in the summer of 2017. Matt says Woodworth was the second owl he saw on Saturday, Dec. 9. “The first was a rather dark bird that I suspect was a young female. She never showed any interest in the bait though she no doubt could see it,” Matt said.

“Woodworth was perched on a very tall, all-metal power line and I could see him, with binocs of course, from a mile away,” Matt reported. Last year Matt was able to catch an adult female in exactly the same spot, luring her from that extreme distance. Woodworth proved to be a near repeat of that situation.

“For the first half-hour he pretty much just sat there and looked around, not really too interested in the pigeons. It was not very windy and there were no clouds and being 10:20 a.m., I thought I was going to be there a while” — snowy owls often ignore a lure until late in the day, as Matt knows from experience.

“After about 30 minutes, though, he cast a pellet and 10 minutes after that he moved some waste out of the other end,” Matt said. “I thought it was go time after that, but he waited another 10 minutes, then jumped off the perched, cleared the power lines and barreled straight into the bal-chatri. He was caught immediately.” (A bal-chatri is an ancient falconry design, a mesh cage containing a lure — in this case, a couple of pigeons — with monofilament nooses that snare the owl’s foot, and a light weight just heavy enough that the bird can’t fly off.)

Woodworth’s map is up, and it’s a new style, about which we’ll have more to say momentarily.  The area where he was caught is close to where Matt tagged Pettibone last year. And speaking of that owl, he’s been checking in regularly from central Saskatchewan near the town of Melfort, where he’s been for the last month. The other owls that have already come south — Stella, Island Beach and Wells — have been offline, probably because their transmitters are still recharging from transmitting huge slugs of backlogged data.

A New Look for Our Maps!
Happy Birthday to Us

9 Comments on “Woodworth Joins the Flock”