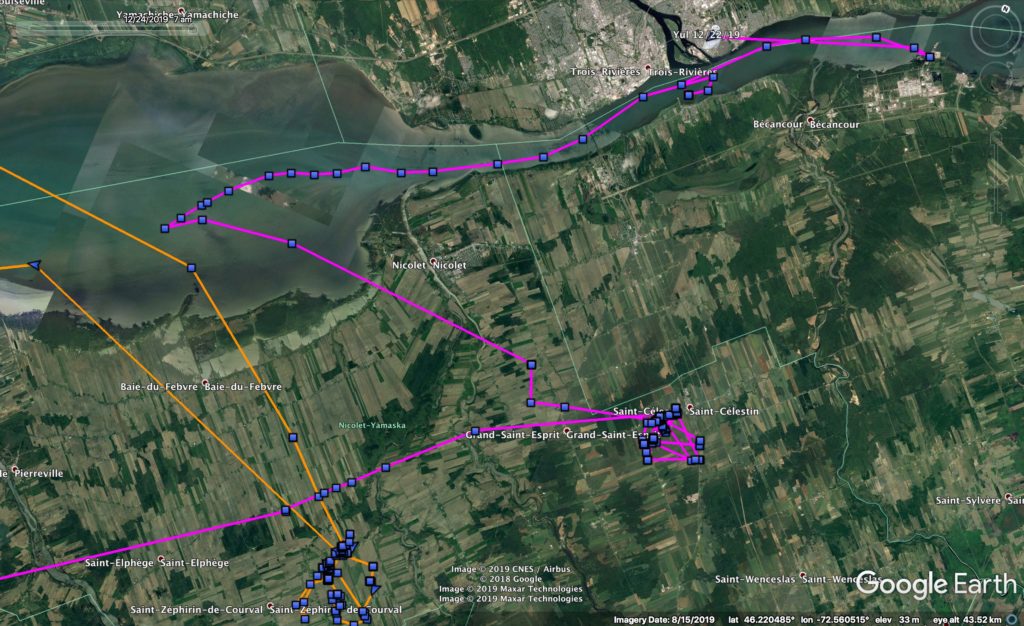 Yul’s river cruise down the St. Lawrence (purple) started not far from where Otter (orange) had been earlier in the winter. (©Project SNOWstorm and Google Earth)

Becca — who is working on her Ph.D. at McGill University analyzing our huge trove of snowy owl movement data, and who has also become a key member of the SNOWstorm field team — was concerned that Yul had missed several check-in times in recent weeks. Yul, as you may recall, was trapped at the Montréal airport — twice! — and each time relocated to farmland well outside the city. The first time she went right back to the airfield, but the second time she seemed to hanging tight…until she disappeared.

Both Andy McGann at CTT (which makes our transmitters) and I reassured Becca that snowies sometimes drop off the grid for weeks at a time, if they’re in a spot with poor cell reception. The transmitters don’t broadcast continually; to save juice, their cell modem only kicks on at preset times and connects to the GSM network. If it fails, a tries a few more time at short intervals, then just waits for the next connection time, usually a couple of days later.

That reassured Becca a little, but having already lost one owl this winter (Montréal, hit by a car), she was understandably nervous about Yul.

Not to worry. On Dec. 22, Yul checked in and her data showed that she had indeed been somewhere with poor reception — drifting down the St. Lawrence River on ice or some other floating object. Since her last check-in on Dec. 13, she had flown some 53 km (33 miles) northeast along the wide St. Lawrence valley to an area of farmland near the village of Saint-Célestin, QC, not far from where Otter had been a few weeks earlier.

Then late in the day on Dec. 21 she flew out into the river and floated serenely east with the current at a leisurely 1 kph (0.6 mph) for the next 40 km (25 miles), her speed increasing to 5 kph (2.5 mph) as she passed through the narrows at Trois-Rivières.  Whatever she was riding did a big loop in the eddy where the Saint-Maurice River enters the St. Lawrence, and not long after that she flew back to land, first to the south shore, then crossing the St. Lawrence to Cap-de-la-Madeleine, across the Maurice from Trois-Rivières.

Not far from Yul, Otter has been moving around north of Montréal, mostly near the town of Sainte-Anne-des-Plaines; at one point he was hanging around a prison complex, something we’ve seen other snowies do in the past — prisons are big, with little outside access and thus few humans to disturb a roosting owl. At one point he was just a few kilometers from Montréal-Mirabel International Airport, but thankfully he veered back to the east and away from it. 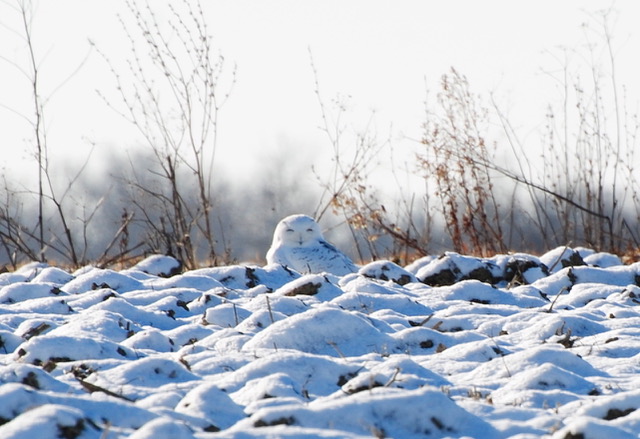 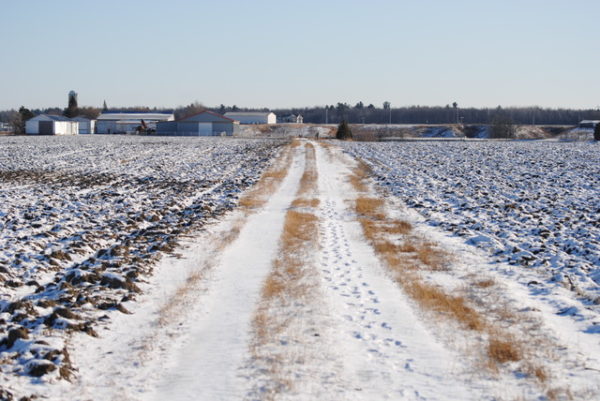 The Québec farmland where Otter has been hanging out. (©Rebecca McCabe)

On Dec. 20, using the previous night’s location data, Becca McCabe was able to find Otter roosting in a snowy field — a bit of good needle-in-a-hay-stack searching. She was able to confirm that the external antenna for his Argos satellite transmitter is gone, which we more or less suspected — CTT had already concluded the light-weight antennas on those experimental units last winter needed a serious upgrade, but it was good to have visual confirmation. And with its internal antenna, his GPS/GSM unit is still working fine.

No recent word from Wells. Since we just past the solstice a few days ago, and are into the shortest, darkest days of the year, it may be a little while before her battery recharges enough to give us regular updates. The same with Woodworth, whom we last heard from in October when he was still west of Hudson Bay. If he stayed up there, his battery will go into hibernation during the subarctic darkness.

Out west, our prairie owls have taken very different approaches to their winter activities. Pearl is still near Watertown, SD, in the Coteau des Prairies region near the Minnesota border, moving back and forth in a 40-mile (65 km) band. Up in North Dakota, Medina has been wandering around through four or five counties in the past two weeks, and is currently just north of Long Lake National Wildlife Refuge in Kidder County. 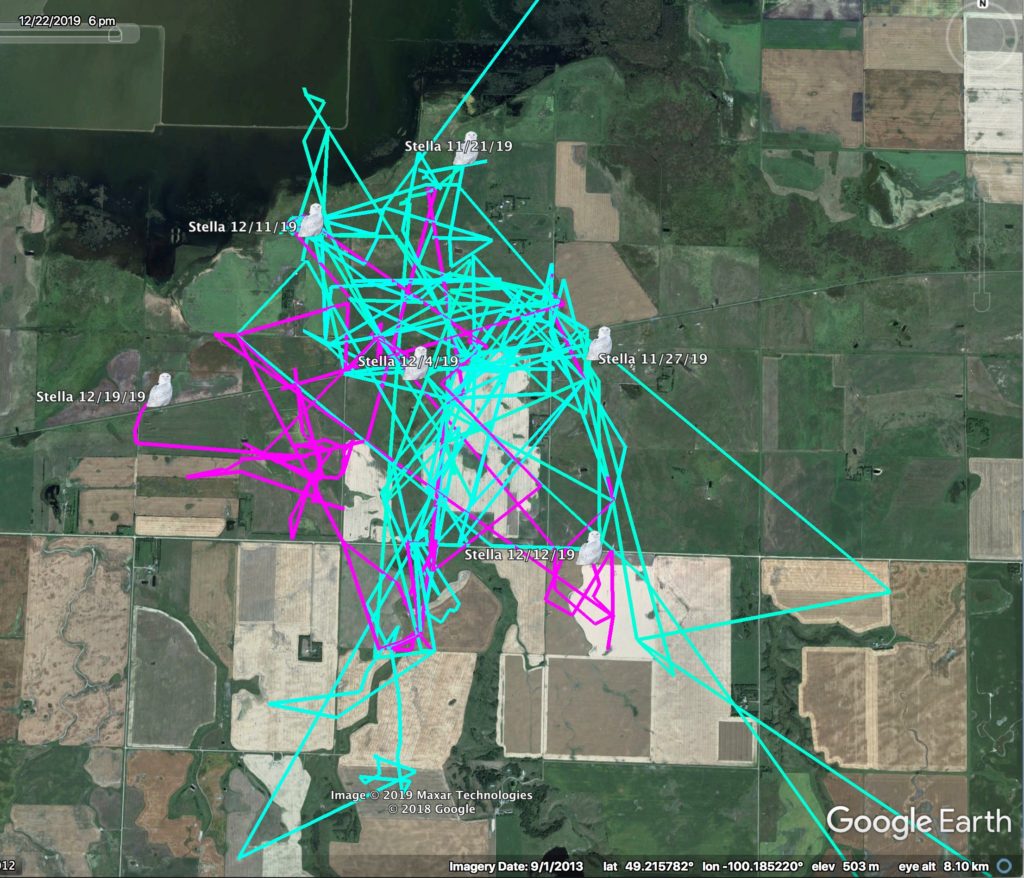 Stella’s looking like a home-body this winter, with her latest movements (purple) in the same relatively small area of southern Manitoba. (©Project SNOWstorm and Google Earth)

After making her own foray into the Dakotas earlier this winter, Stella really seems to have found her spot below Whitewater Lake in extreme southern Manitoba. She’s largely been using an area of about 12.5 sq. km (5 sq. mi.) since late November, and shows no sign of planning to leave. 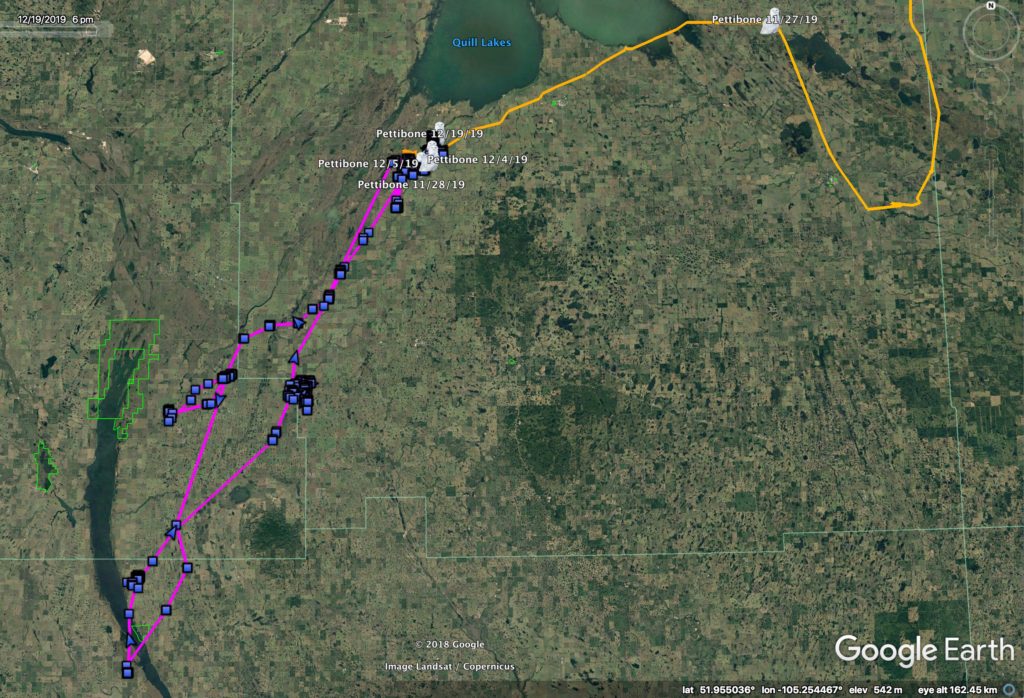 After making a week-long foray to the south, Pettibone reversed course and headed back to Quill Lakes, SK. (©Project SNOWstorm and Google Earth)

Pettibone, on the other hand, made a 95-km (60-mile) south from his base by Quill Lakes into Division No. 6 in southern Saskatchewan, before turning around and heading right back where he started a week later.

However you’re celebrating this week and next, may it be in peace and warmth — and maybe with a snowy owl perching on your rooftop for good luck in 2020. Thank you for your continued support of Project SNOWstorm.

Buckeye Returns!
New Maps Are Up!

2 Comments on “Yul the River-rider”