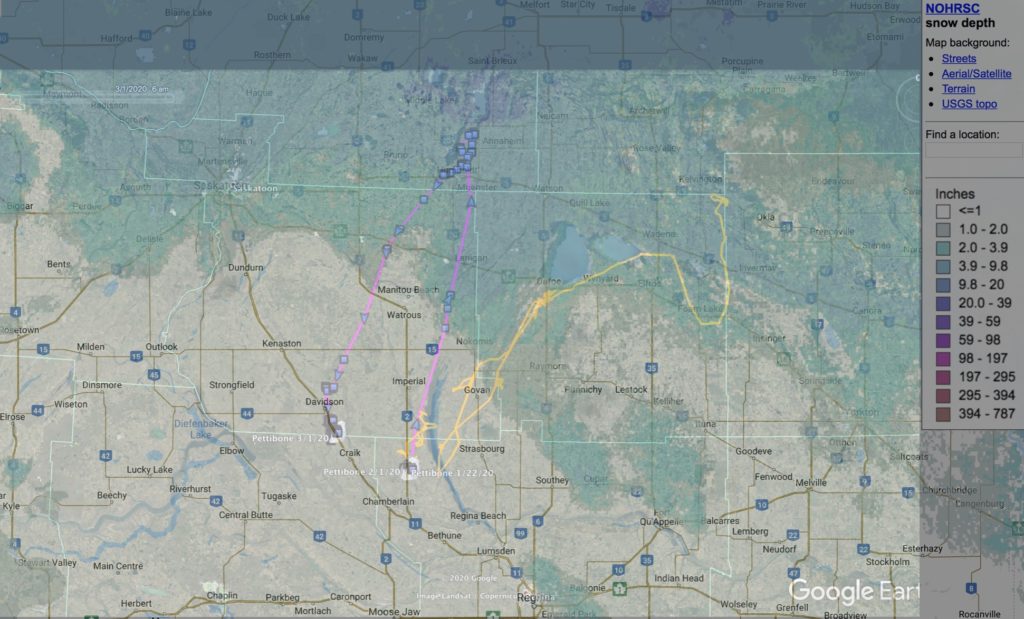 Although a little hard to read, this overlay of Pettibone’s movements (most recent in purple) and the NOAA snow cover map of southern Saskatchewan shows how the owl moved north in a region with much heavier snow cover, then reversed course south to snow-free zones. (©Project SNOWstorm and Google Earth; snow cover map NOAA)

We’re just a few weeks away from the spring equinox, and as the sun creeps higher in the sky and days begin the lengthen dramatically in the northern latitudes, this is when we start to expect some restlessness to set in among our tagged owls.

And that’s exactly what’s been happening the past couple of weeks. It’s not a rush to the north yet by any means, but even some of our most settled birds have started making short movements away from their winter territories — a sign of things to come.

For example, out on the plains of Saskatchewan, on Feb. 14 Pettibone began a 159-km (99-mile) overnight flight north from his site near Last Mountain Lake, passing a series of huge saline lakes — Waldsea, Deadmoose and Houghton lakes, which are important migratory bird stop-overs in spring and fall. At times, his transmitter recorded flight speeds of more than 116 kph (72 mph), suggesting he may have had a very strong southerly tail wind assisting him — more typical speeds are about half that.

Pausing there only briefly on Feb. 15-16, Pettibone then headed right back south, winding up near Craik, SK, on the boundary between Div. 11 and Div. 7 — only 40 km (24 miles) from where he started, and in almost exactly the same place he spent much of the winter of 2018-19. In all, Pettibone traveled 488 km (303 miles) in his looping trip. Interestingly, the area around the lakes has significantly more snow cover than the almost snowless prairies where Pettibone has been staying — he may have turned back because the hunting is easier where there isn’t a blanket of snow to hide small mammals.

Similarly Stella, who has been all but immobile within her small winter territory near Whitewater Lake in southern Manitoba, shook off her winter lethargy. On Feb. 26 she made a short flight north, then on Feb. 27 moved about 30 km (19 miles) to the northwest, which is where she was the morning of March 1. 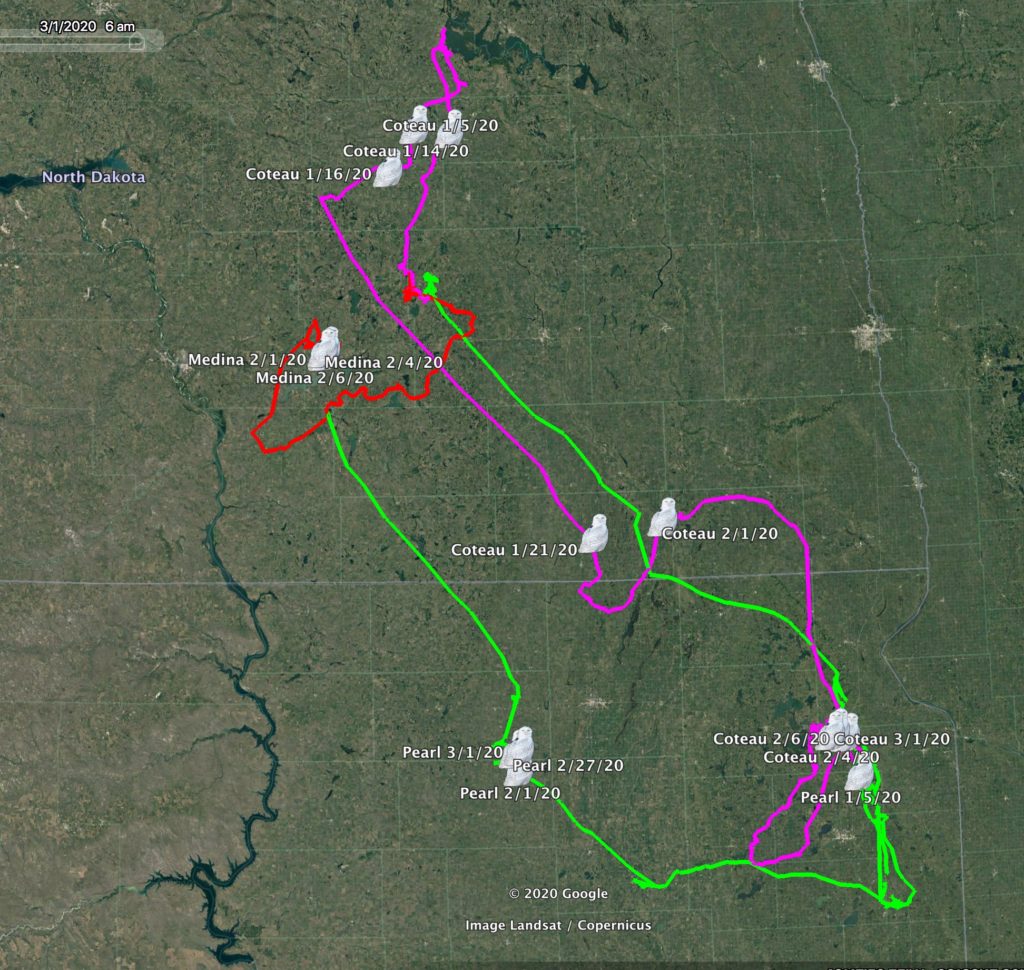 Colorful spaghetti across the Plains — Coteau (purple), Medina (red) and Pearl (green) have made tracks all over the Dakotas in recent months. (©Project SNOWstorm and Google Earth)

Things have really been churning in the Dakotas, but that’s less of a change, because Pearl and Coteau have been moving around a lot all winter. In the past few weeks Pearl flew from Faulk County, SD, at least 110 miles (177 km) northwest to Stink Lake — I’m not making that up — in Emmons Co., ND. I say “at least,” because her transmitter went into dormancy for a week due to a low battery charge, and she was at Stink Lake when it resumed functioning Feb. 7. For all we know, she may have been even farther north before then. In any event, Feb. 7 she headed back south, winding up almost exactly where she’d started Feb. 2, south of Ipswich, SD, near the Edmunds/Faulk county line.

Coteau, meanwhile remains in northeastern South Dakota near Bitter Lake, the state’s largest natural body of water.   Over the past week she made a 210-mile (339-km) loop southwest near Watertown, SD, winding up March 1 back where she had started. Even Medina, who has been stuck like a tick to a small patch of land near Steele, ND, made a quickie flight to the north last week, then looped back.

Ornithologists use the German term, zugunruhe — which translates to “migratory restlessness” — to describe this kind of growing itch that migrants feel as the seasons change. It’s brought on by hormonal changes triggered by both the bird’s internal circadian rhythms and the changing day length. Often it’s a strong wind from the right direction — southerly, in this case — that prompts an exploratory flight, and in fact the winds in eastern North Dakota were strongly from the south the day Medina made her short loop. 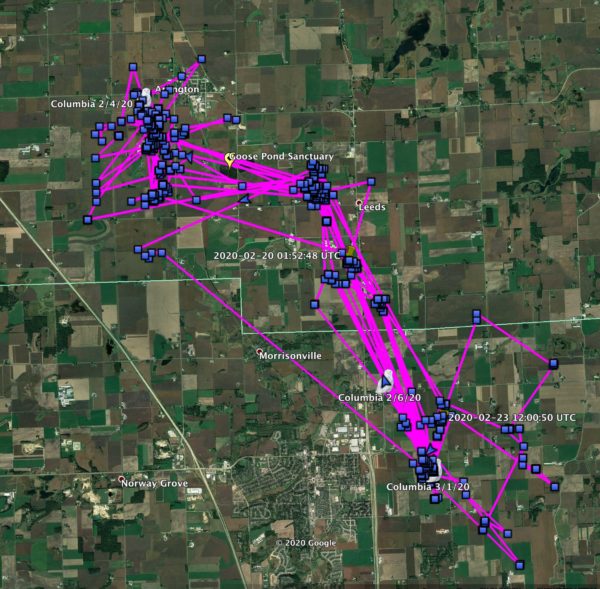 Columbia’s movements in Wisconsin have three main nodes, and a lot of commuting between them. (©Project SNOWstorm and Google Earth)

There’s been less evidence of zugunruhe in the owls farther east. In Wisconsin, Columbia has been tracing a very distinct movement pattern northeast of Morrisonville, a narrow, 7.5-mile (12-km) long path anchored at one end by the farmland and a sand quarry near Audubon’s Goose Pond Sanctuary, and at the other what must be a highly productive field for hunting just east of a large housing development.

In Michigan, we kind of wish Buckeye would get restless, but so far she has shown no inclination to leave Detroit Metro Airport. While she spends a lot of her time at the north end of the complex, among hangers and parking lots, she does crisscross the runways regularly, and each time she does she’s at risk of a plane collision.

In upstate New York, Redwood is holding fast to an area of about 17 square miles (44 sq. km) where he’s been since this adult male was tagged in January. NOAA’s snow cover map shows that the area has relatively little snow — though just to the south, ferocious lake-effect storms, fueled last week by strong winds blowing over ice-free Lake Ontario, dumped several feet of snow, at rates of four inches an hour, near Watertown. 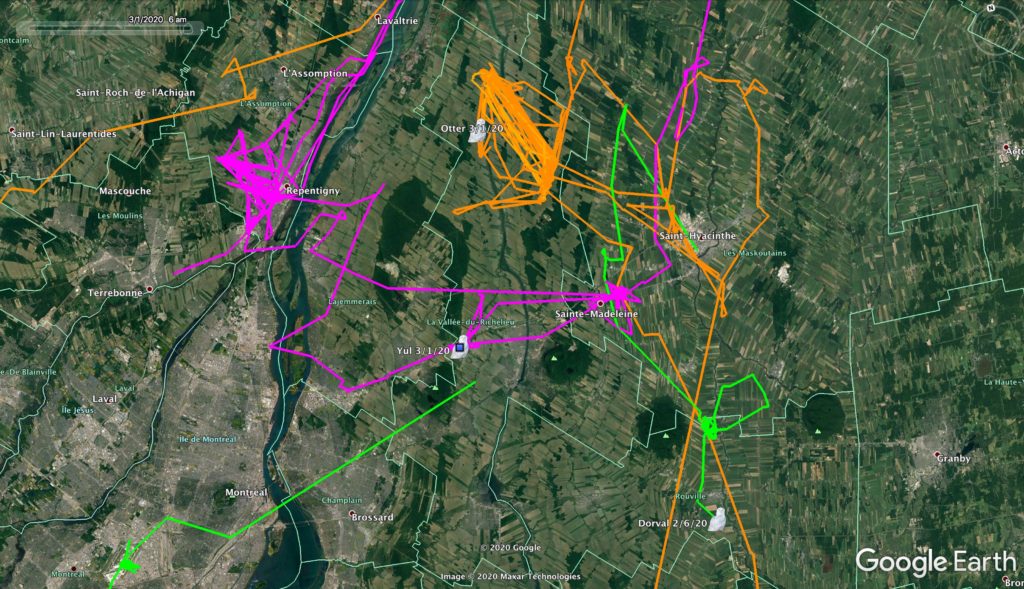 Up along the St. Lawrence River in Québec, Dorval, Otter and Yul have been weaving knotted patterns of movement north and east of Montréal. It makes for a multi-colored scribble on the map as they have crossed each other’s paths, but none have shown any interest in going to the airport — though Yul did briefly return to her January hangout along the highway in Repentigny.

Finally, over in Québec City, Wells has been hugging the waterfront — and the very busy Autoroute 440, whose streetlamps are a favored perch. When she’s not ashore, she’s staying on the ice out in the river, something she’s not done as frequently in previous winters in the city.

That’s the update, but not all the news! We have new owls we’re tracking, and we’ll be back to introduce them in the next few days.

3 Comments on “Zugunruhe to You, Too!”