Snowy owls, coming down from the Arctic, can be remarkably approachable, especially young birds early in the winter. But because they are often so naive around humans, it’s easy for birders, photographers and the general public to approach them too closely. What is an exciting encounter for people can be continual — and at times even dangerous — harassment for the owl. The bird may be chased into traffic (something snowies don’t understand) and a flushed owl is liable to be attacked by another raptor like an eagle, or mobbed by crows.

Our tracking data confirms that these owls are primarily nocturnal, and when undisturbed by humans they rarely move much in the daytime. An owl flying from spot to spot in daylight usually isn’t “just moving around” like a lot of people assume, but responding to pressure and harassment, even if it’s not immediately evident to observers.

Here’s how to be a good observer:

Keep your distance.
Respect private property.
Do not feed an owl, ever.

This is the first and most important rule. Just because the owl may tolerate a fairly close approach doesn’t mean you should push the envelope. If the owl is visibly reacting to your presence — fidgeting, repeatedly staring at you, head-bobbing or changing position — you’re too close, and need to back off immediately.

Needless to say, if you’ve flushed the owl you were much too close — and should  reconsider your behavior next time.

Fortunately, a vehicle makes a terrific blind, so stay in your car whenever possible. (It’s also a lot warmer on a frigid day.) Use a spotting scope and a telephoto lens, and be content to watch from a safe distance. Be patient, and if you can time your visit late in the day, when the owl typically will become more active, it may approach you, especially if you’re positioned near a favorite perch.

And watching from a distance — when you’re not interfering with the owl’s natural behavior — has its own particular rewards. Researchers spend countless hours watching owls, picking up clues to the surroundings from the owl’s behavior. Is it staring off in one direction consistently? Perhaps there is a red-tailed hawk, bald eagle or another snowy owl hidden over a rise in that direction. Has it raised itself up almost vertically, and is focused with laser intensity on one place? Get ready for it to make a lighting attack on prey.

The Ottawa County (MI) Parks Department has produced a terrific video about how to watch snowy owls without causing a problem for the birds. Similarly, the Wisconsin Society for Ornithology has a great video on proper behavior when observing all owls, including snowies.

Many landowners who host snowy owls report problems with visitors ignoring common courtesy (and sometimes even obvious “No Trespassing” signs) to get close to owls. Do not cross private property without permission. And in coastal environments, snowy owls often roost in fragile dune habitat that is generally closed to foot traffic. Obey all closure or off-limits signs.

Do not feed an owl, ever.

One of the most damaging things anyone can do (usually to attract the bird for a close-up photo, but sometimes out of a misplaced belief that the owl is starving) is to feed a snowy owl. Because they have little innate fear of humans, snowy owls can very quickly become very habituated to people tossing them mice. Once they associate people with food, the owls are drawn into dangerous situations, such as swooping close to roads. They may also approach people who may harm them, either from fear and ignorance, or from malice. 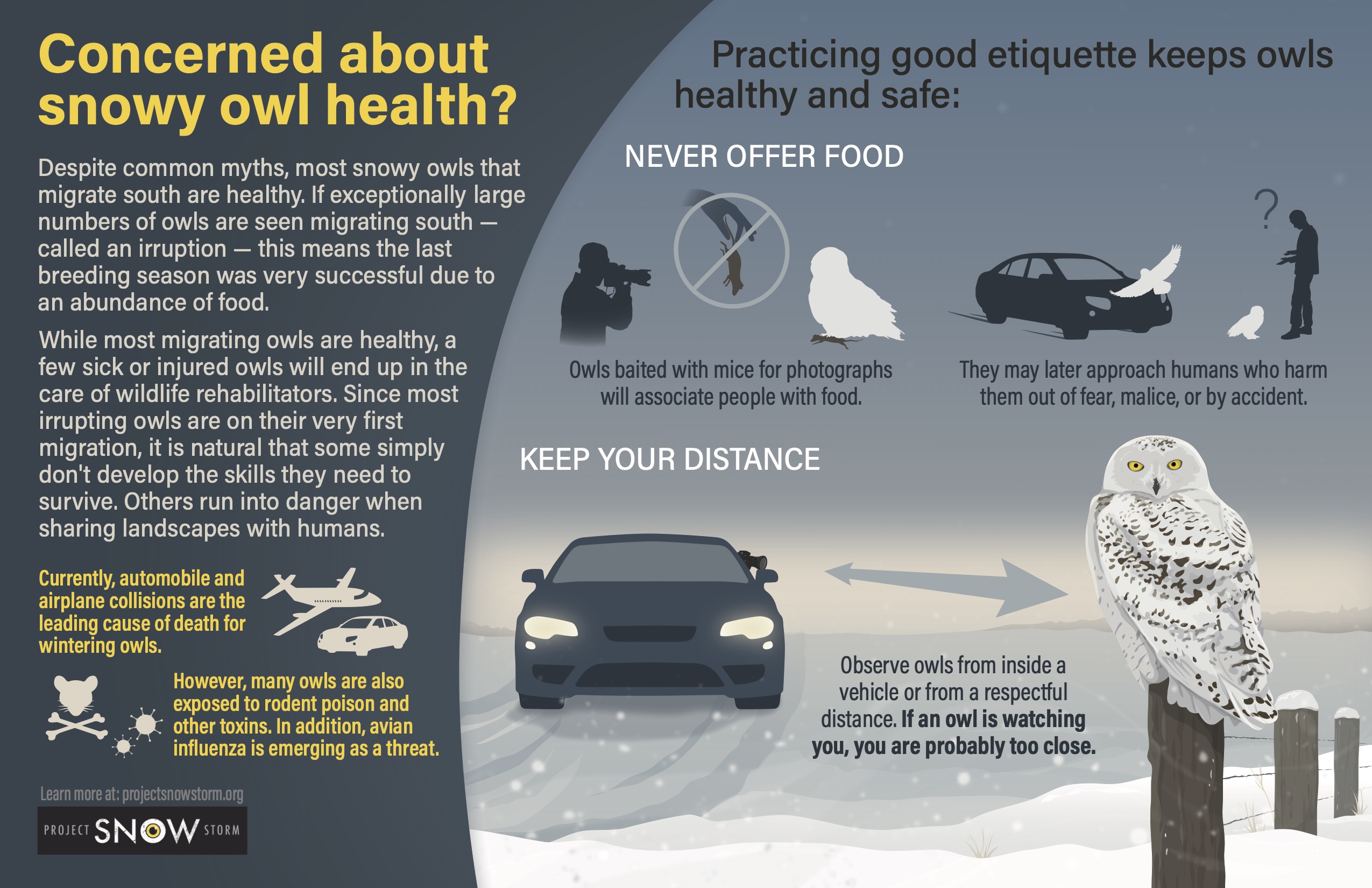