Aimé is an adult female trapped at the Montréal-Trudeau Airport, tagged by Dr. Guy Fitzgérald from the University of Montréal, and relocated 80 km to the south shore of the St. Lawrence River Nov. 29, 2021, near the community of Saint-Aimé. She is one of more than 40 airport relocation owls whose movements we have tracked to learn how best to prevent owl-airplane collisions. Unfortunately, she returned to the airport and was killed by a jet engine blast on Dec. 13, 2021. 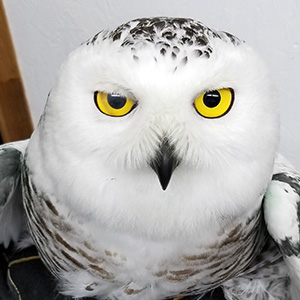 Bleuet is a juvenile female snowy owl trapped by Falcon Environmental at Trudeau-Montréal International Airport, fitted with a transmitter by Dr. Guy Fitzgérald of the University of Montréal, and relocated Feb. 16, 2022, 65 km (40 miles) to farmland west of Lanoraie, QC, on the north shore of the St. Lawrence River. She was named for the many blueberry fields near her release site, although she almost immediately returned to the airport. Bleuet’s transmitter, which had previously been deployed on Aimié, was paid for by generous donations from the public to Project SNOWstorm.

Britton is an immature female snowy owl, trapped at the Frederick Douglass Greater Rochester International Airport by Tom McDonald and his team, fitted with a transmitter and released 45 miles (70 km) southwest of the airport on Feb. 12, 2022. She is named for historic Britton Field, an early 20th century military airfield that became the Douglass Greater Rochester airport. Britton’s transmitter was paid for by generous donations from the public to Project SNOWstorm.

Nicolet is an after-second-year (at least three-year-old) female snowy owl, trapped by Falcon Environmental at Montréal-Trudeau International Airport in Québec, and tagged by Dr. Guy Fitzgérald at the University of Montréal. She was relocated 120 km (75 miles) northeast to the south shore of the St. Lawrence River and released Dec. 18, 2021, near the village of Nicolet, for which she was named. Her transmitter was underwritten by generous donations from the public to Project SNOWstorm. 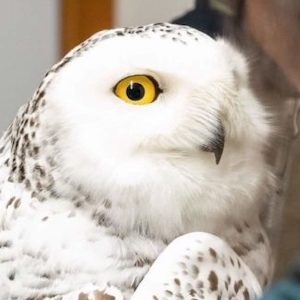 Odanak is an adult female snowy owl originally banded in 2014 at the Montréal-Trudeau International Airport. She was recaptured there in December 2021 by Falcon Environmental, tagged with a GPS/GSM transmitter by Dr. Guy Fitzgérald at the University of Montréal, and relocated 110 km (70 miles) northeast to the south shore of the St. Lawrence River, where she was released Dec. 15, 2021. She is named for the Abenaki First Nation community of Odanak along the Saint-François River not far from her release site.

Roc — shorthand for Rochester, NY, where this adult female was trapped Feb. 10, 2022, at the Frederick Douglass Greater Rochester International Airport — is at least six years old based on flight feather molt. She was captured by a team led by Tom McDonald and Melissa Mance-Coniglio, fitted with a GPS/GSM transmitter and relocated to near Seneca Lake in the Finger Lakes region of central New York. Within two weeks she had returned to the airport. Roc’s transmitter was paid for by generous donations from the public to Project SNOWstorm. 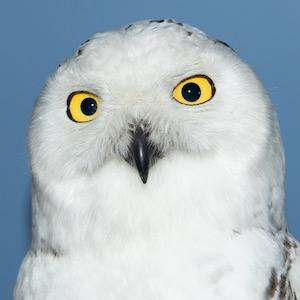 Romulus is an immature male snowy owl captured by Selena Creed at the Detroit Metro Airport, tagged with her help by Nova Mackentley and Chris Neri from Whitefish Point Bird Observatory, and released in Huron County, MI, on Feb. 26, 2022. He was named for the town of Romulus, MI, where the airport is located. Romulus’ transmitter was paid for by generous donations from the public to Project SNOWstorm. 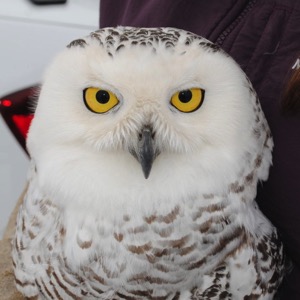 Alderbrooke is a juvenile female trapped Dec. 9, 2020, at the Montréal-Trudeau International Airport by Falcon Environmental, tagged by Rebecca McCabe and moved from the airfield as part of Project SNOWstorm’s research into the best ways to relocate snowy owls so they remain away from airports. She is named for one of the sanctuaries of Bird Protection Québec, which is supporting this research. 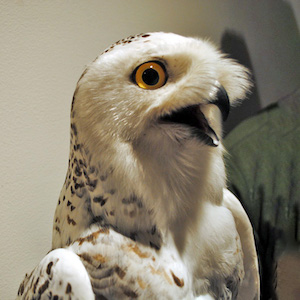 Amherst is an adult female tagged Feb. 15, 2020, on Amherst Island, ON, in Lake Ontario by the Simcoe County Banding Group and Rebecca McCabe. She spent the remainder of the winter on the island and migrated north in April, and was last heard from May 5, 2020, along the eastern shore of James Bay. Nineteen months later, having nested twice in the Ungava Peninsula and overwintered in 2020-21 on the south edge of Hudson Bay, she came back south into cell range in western Québec. Amherst’s transmitter, a GSM/Argos hybrid, was paid for by generous donations to Project SNOWstorm. 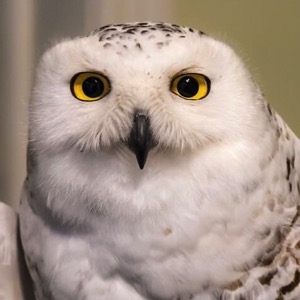 Columbia is an adult female captured in January 2020 near Madison Audubon’s Goose Pond Sanctuary in Arlington, WI, with support from Madison Audubon. She migrated north in April, spending the summer of 2020 on Prince of Wales Island in the central Canadian Arctic before migrating south. She first checked in Nov. 12 in Manitoba, and then moved to southeastern Saskatchewan. 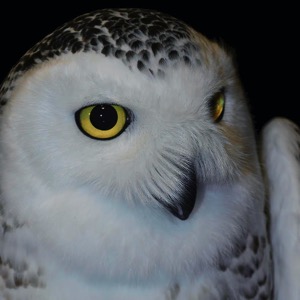 Fond du Lac, a fourth-year female, was trapped and tagged by Gene Jacobs on Feb. 23, 2020, along with two other snowies, near Waupun, WI. She was nicknamed in honor of Fond du Lac Audubon Society, an anonymous donor to which had underwritten the cost of the transmitter. She wintered near her capture area, and migrated north in early April 2020. She nested that summer in the eastern Ungava Peninsula of Québec, then migrated north to spend the winter of 2020-21 in the northern Ungava and on sea ice south of Baffin Island. In the summer of 2021 she nested on Baffin Island, migrating south to southern James Bay in November 2021, where she checked in and uploaded the previous 18 months’ data. 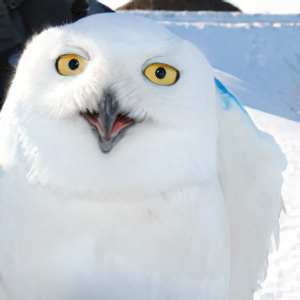 Hochelaga is named for the original Iroquoian village at what is now Montréal. He was trapped by biologist Julie Lecours of Falcon Environmental on March 2 at the Montréal-Trudeau International Airport, was already banded, and records showed Falcon had originally trapped him at the airport on March 4, 2016, by which time he was already mature and almost completely white. 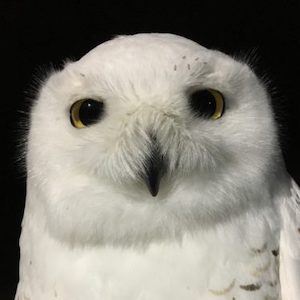 Otter is an adult male tagged Jan. 18, 2019, in Jefferson County, NY, not far from Fort Drum, by Tom McDonald. He was the first snowy owl — and one of the first birds anywhere in the world — fitted with a hybrid GSM (cellular) and Argos (satellite) transmitter, which allows us to monitor his movements year-round. His transmitter was paid for by generous donors to Project SNOWstorm.

This juvenile female was captured by a four-person SNOWstorm team Jan. 15, 2018, on the south shore of Amherst Island, Ontario, at the northeastern end of Lake Ontario. She is part of an ongoing study to determine the extent to which 27 large wind turbines, being installed on Amherst, impact the movements of wintering snowy owls there. She returned south Nov. 15, 2018, checking in from southern Saskatchewan after spending the summer on Victoria Island in the Canadian Arctic. She spent the winter of 2018-19 in northeastern Montana, then migrated north for the summer of 2019 to Lougheed Island, one of the most remote and northerly parts of the Canadian Arctic Archipelago. She migrated south in October 2019 to southern Saskatchewan, then back north in April 2020 to King William Island in the central Canadian Arctic. Her transmitter was underwritten with generous donations from the public to Project SNOWstorm. 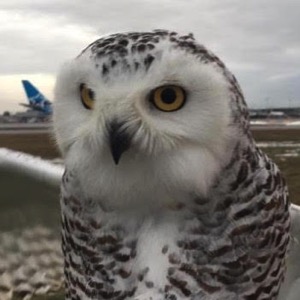 Yul is a third-year female snowy owl, trapped Nov. 24, 2019, at Montréal-Pierre Elliott Trudeau International Airport in Québec by Falcon Environmental Services, tagged by Rebecca McCabe, and relocated away from the airport for her safety. Her name is the international code for the Montréal airport – YUL. Her transmitter was funded by generous donations from the public.