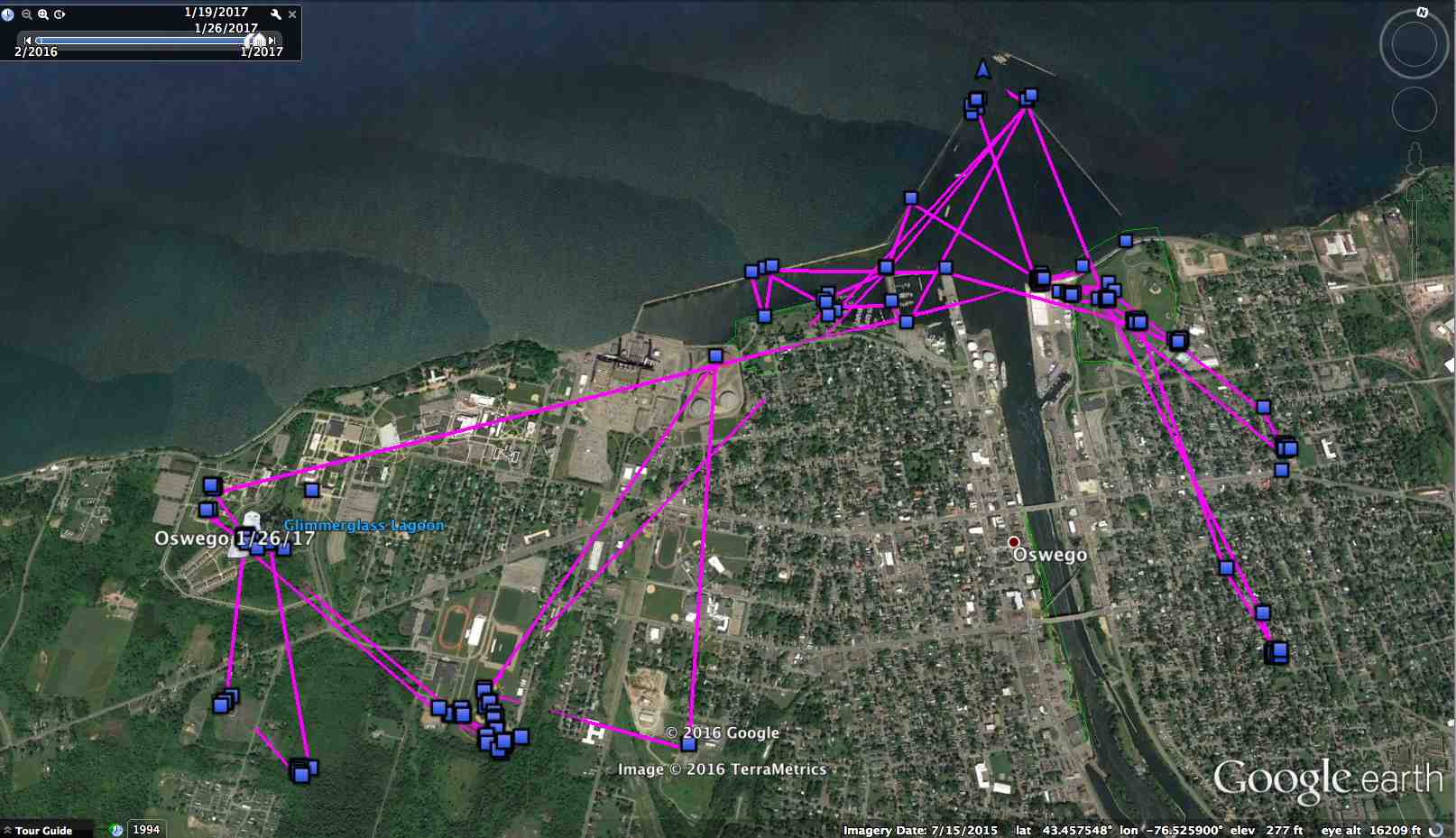 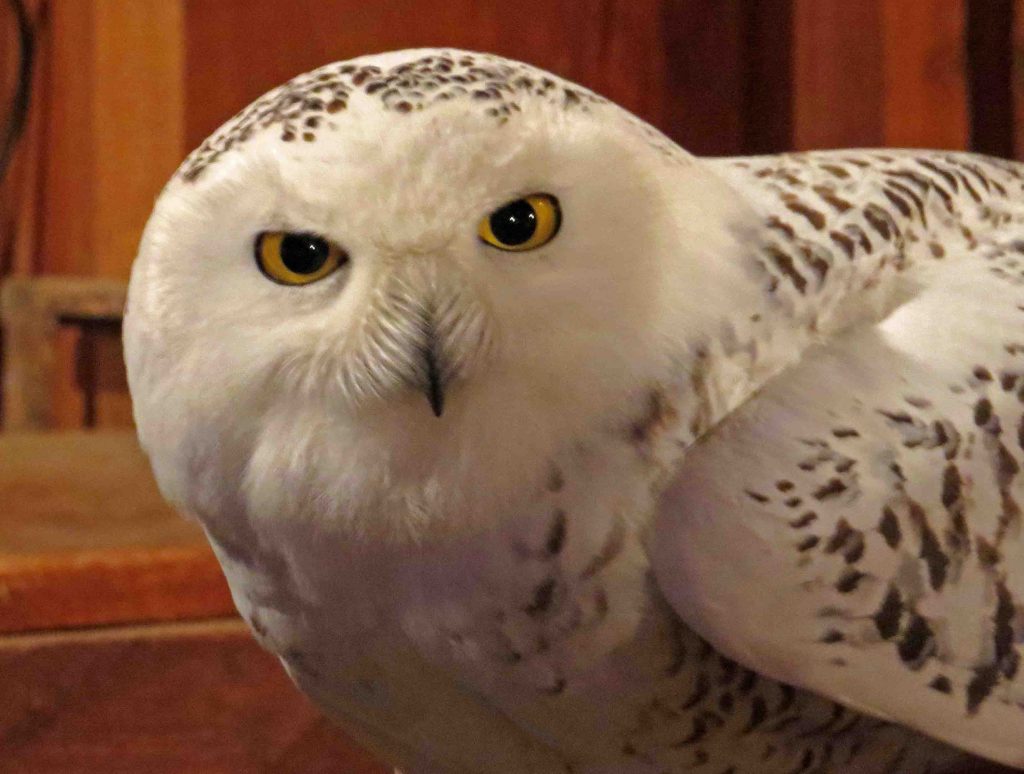 Banded, weighed and measured, this young male snowy was ready to go back to the vole-rich fields of northeastern Pennsylvania. (©Wayne Laubscher)

A few days after the new year had started, birders found a snowy owl in the rolling farmlands and woodlots of Bradford County in northeastern Pennsylvania, not far below the New York line.

Because relatively few snowies show up in this area, the bird became a minor local celebrity, with half a dozen or more birders and photographers lined up most days to watch the owl happily feeding on abundant meadow voles.

Thanks to a connection by Wayne Laubscher, a bander who has helped me in the past with snowy owl work, I stayed in touch with Diane Davis, whose family owns the Davisland Farms where the owl was staying. Diane reported that most visitors were polite and respectful, though she had to ask one or two not to approach the owl.

Friday afternoon the stars finally aligned, and I headed north two and half hours from my home to meet Diane and her mother, Mary Edith, whose home overlooks the sloping fields where the owl has been spending the past month. After a homemade molasses cookie, a discussion about snowy owls and a chance to catch my breath, it was time to see if I could trap the bird and fit it with a Project SNOWstorm transmitter.

There were half a dozen cars along the road, but the owl was several hundred yards downslope, near a small stream. It was an hour or more before dark, but in the gloom and periodic snow showers, the bird was clearly alert and ready to start hunting. I shouldered a big bownet and several other pieces of gear, but I had no sooner set up the rig when the snowy took off and flew a some distance to the edge of a woodlot. I moved into a better location, perhaps 75 yards from the bird, but this time while I was getting the trap set, the owl took off in a long, slanting dive and snatched a vole from the grass, returning to its perch.

Hmm. With a warm vole in its belly, the owl might not be all that interested in the pigeon (carefully jacketed in a protective leather vest) that was sitting in my bownet. I turned on a small predator call, hoping the squeals would get the bird’s attention and ratchet up its appetite, and moved back some distance, my radio-controlled trap-tripper ready.

The owl certainly appeared interested, staring intently at the lure as the snow came and went in varying intensity. The only time the owl looked away was when a northern harrier drifted over the field, and the owl swiveled its huge white head to watch.

Time for the buffet approach. Walking back to the car, I put two more pigeons in a bal-chatri trap — a large beehive-shaped cage with nooses of strong monofilament festooning the outside. BC traps are an ancient design, dating back thousands of years in India, where falconers caught small hawks with loosely woven baskets and nooses of horsehair. I put the BC a few yards from the bownet, and retreated once more. 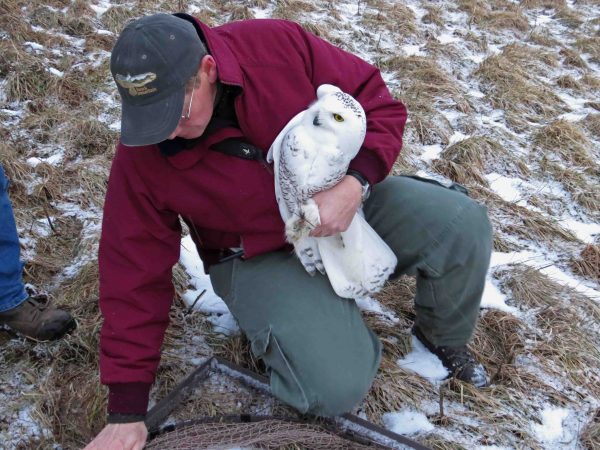 This time it didn’t take long. Wayne, who had arrived a short while earlier, said, “He it comes!” as the owl dropped off its perch and headed straight for the rig. It skimmed over the bownet and tried to grab the pigeons inside the bal-chatri. Somehow its feet missed the nooses, but after breaking off and landing a short distance away the owl came back again — and this time the ancient design worked perfectly, harmlessly catching it by one foot.

The Bradford owl proved to be a juvenile male, in great shape — but not quite heavy enough for us to feel comfortable fitting him with a transmitter, much to the Davis family’s disappointment. Mine, too, obviously, but the guidelines we follow (which restrict us to no more than 3% of the bird’s total mass) are conservative for a reason. 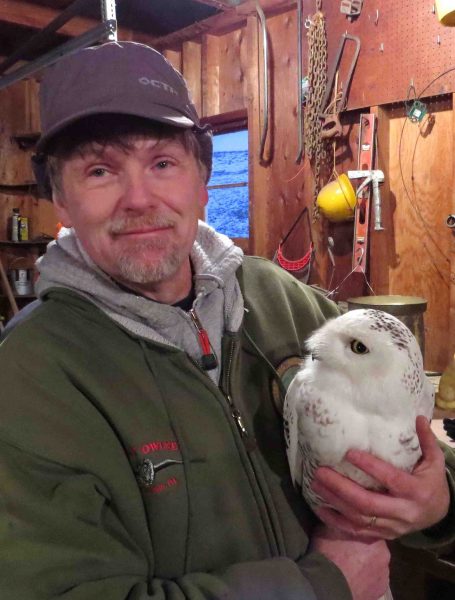 Healthy but a little too small for a transmitter, the owl is ready for release, held by longtime owl bander Wayne Laubscher.

Working in the shelter of Diane’s garage, we banded the bird and took a standard series of measurements. Like most snowy owls, he was remarkably calm in the hand, as if being surrounded by awe-struck humans is all in a day’s work.

Full dark had just settled over the landscape when we finished, and walked across the road to the edge of the large fields the owl had made his winter home. Mary Edith and I gave the bird a gentle toss, and he flew silently across the fields, huge white wings rowing against the twilight.

The next morning I got an email from Diane. “I looked out the living room window this morning and guess who is on the electric pole as proud as can be! Thanks again for including us so much in this project — we really enjoyed it!” 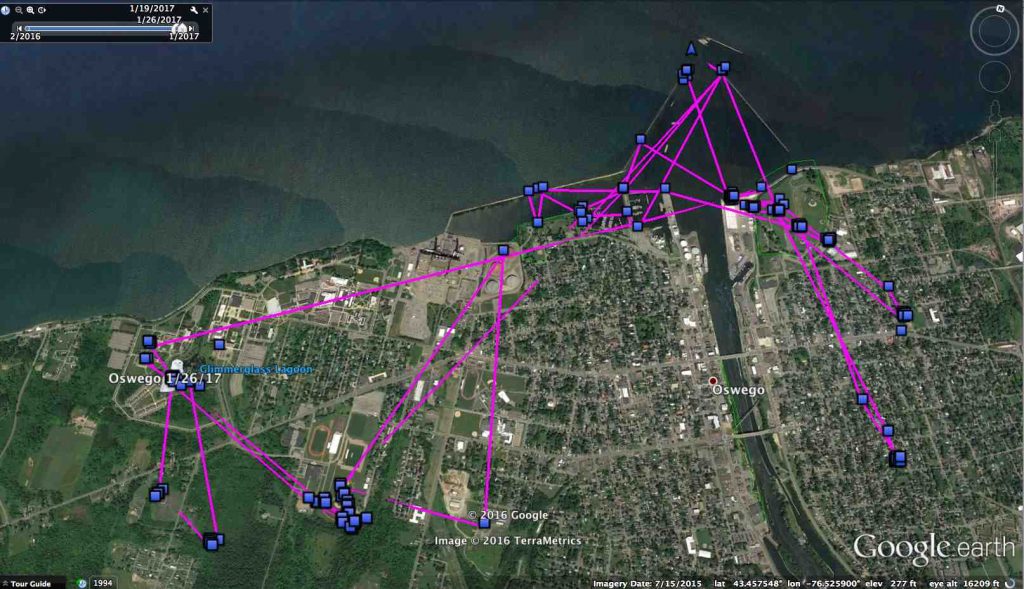 Oswego’s sight-seeing tour of her namesake town — from lighthouse to fort, from university campus to ballfields. (©Project SNOWstorm and Google Earth)

So while we didn’t get a new transmittered owl in Pennsylvania, we have plenty going on with the birds we’re already tracking.

For example, Oswego (which Tom McDonald tagged on Jan. 19) has been making the rounds in her namesake community on the shores of Lake Ontario, from the waterfront to Glimmerglass Lagoon on 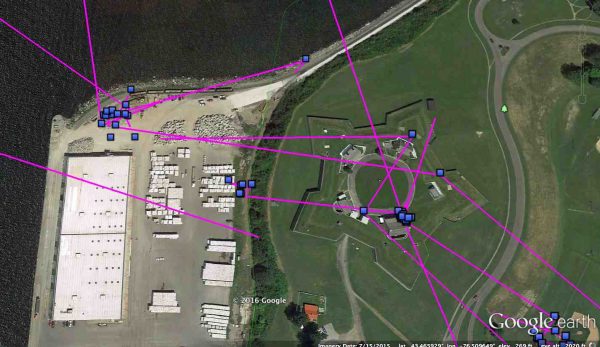 Oswego’s been hanging out at historic Fort Ontario, first built in 1755… (©Project SNOWstorm and Google Earth)

the campus of the State University of New York, from historic Fort Ontario to one of the last surviving vessels of the Normandy invasion, and from a quiet neighborhood on East 7th Street to a municipal swimming pool and several ballfields around town, including SUNY’s Romney Field House. 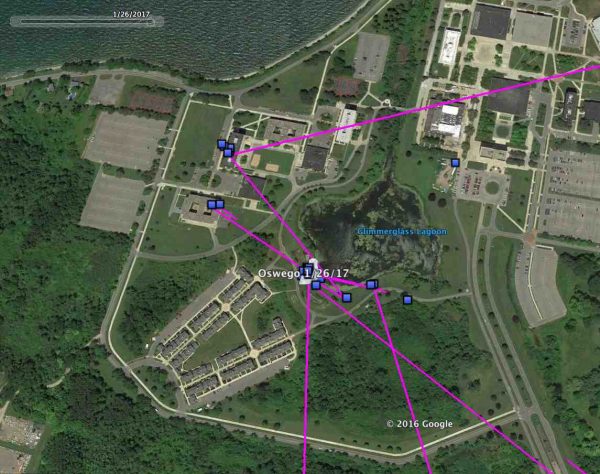 …and the campus of SUNY-Oswego at Glimmerglass Lagoon, (©Project SNOWstorm and Google Earth)

town known as the “Port City of Central New York.” Oswego sits at the mouth of the Oswego River, and is a regular wintering site for snowy owls, which like the long jetties, breakwaters and other inaccessible areas along the lakeshore.

Oswego’s been frequenting a couple of places where a hungry owl can get a meal. She likes to perch on the roof of one of the buildings inside the restored five-point historic fort, first built in the 1750s, and the backstop of a nearby baseball field. A rock pile along the mouth of the river, and the lighthouse at the entrance to the port, have also been frequent perches (giving her a good view of passing waterfowl, no doubt). The same is likely true of Glimmerglass Lagoon on the SUNY campus, where she was sitting on Thursday evening when she checked in with her week’s data.

Not much change to report on Dakota and Hardscrabble, who remain on their winter territories in Saskatchewan and southern Ontario respectively. Dakota is roaming a bit more widely than before, pushing into fresh areas a little southwest of the town of Francis, but compared with some of our past snowies (which often roamed hundreds of kilometers over several weeks) she’s a homebody. 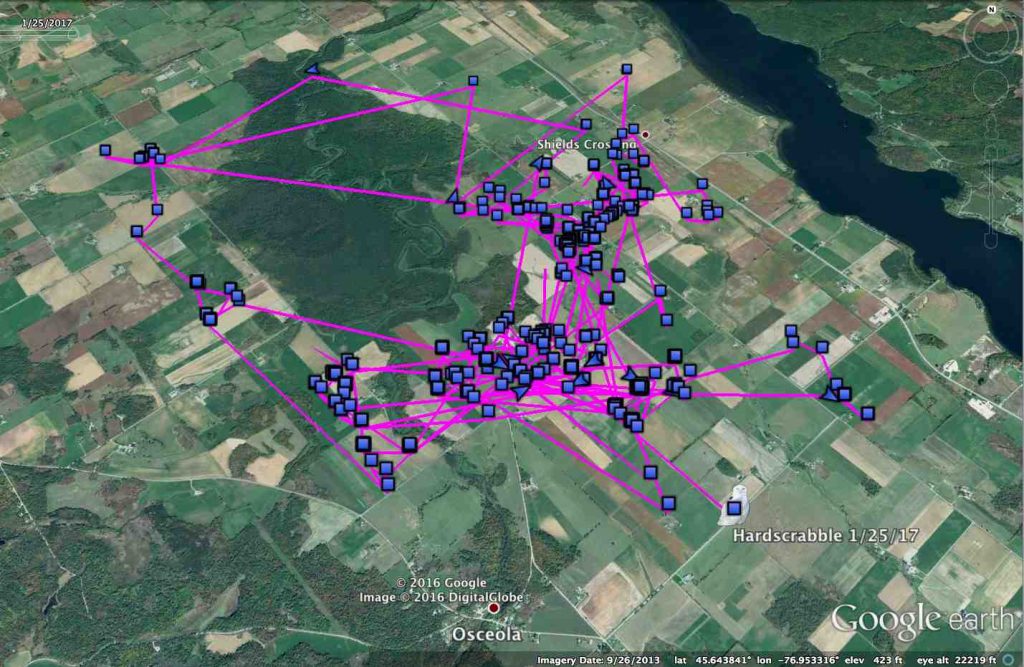 Like a doughnut around its hole, Hardscrabble’s winter territory wraps around an 800-ha (2,000-acre) forest block that the owl rarely enters. (©Project SNOWstorm and Google Earth)

Hardscrabble also remains near his favored spot close to Cobden, ON, using farmland that surrounds an 800-hectare (2,000-acre) woodlot in the Ottawa River valley. He primarily uses the land along the southeastern fringe of the forest block, and only rarely does he fly over it — snowies are open-country birds, and forests are alien environments to them.

Finally, we know (thanks to the ceaseless efforts of our friends Dan and Patricia Lafortune on Ottawa) that Baltimore remains near Kinburn, ON. Unfortunately, his transmitter stopped sending data two weeks ago, after a couple of odd hiccups. We’re pulling out all the stops to recover that apparently faulty unit (and its stored data), and we’ll have a full report on the situation in the coming days.

3 Comments on “A Close Call, and a Tourist Owl”