The spell of mild weather that pushed through the upper Midwest and East over the weekend sparked some significant movement from our tagged owls.

Erie made a 145-mile (233-km) trip up the diminishing ice on lower Lake Huron, having spent about a week at the inflow of the St. Clair River on the U.S./Canadian border. As of Monday evening he was about 10 miles (16 km) off Kincardine, Ontario. 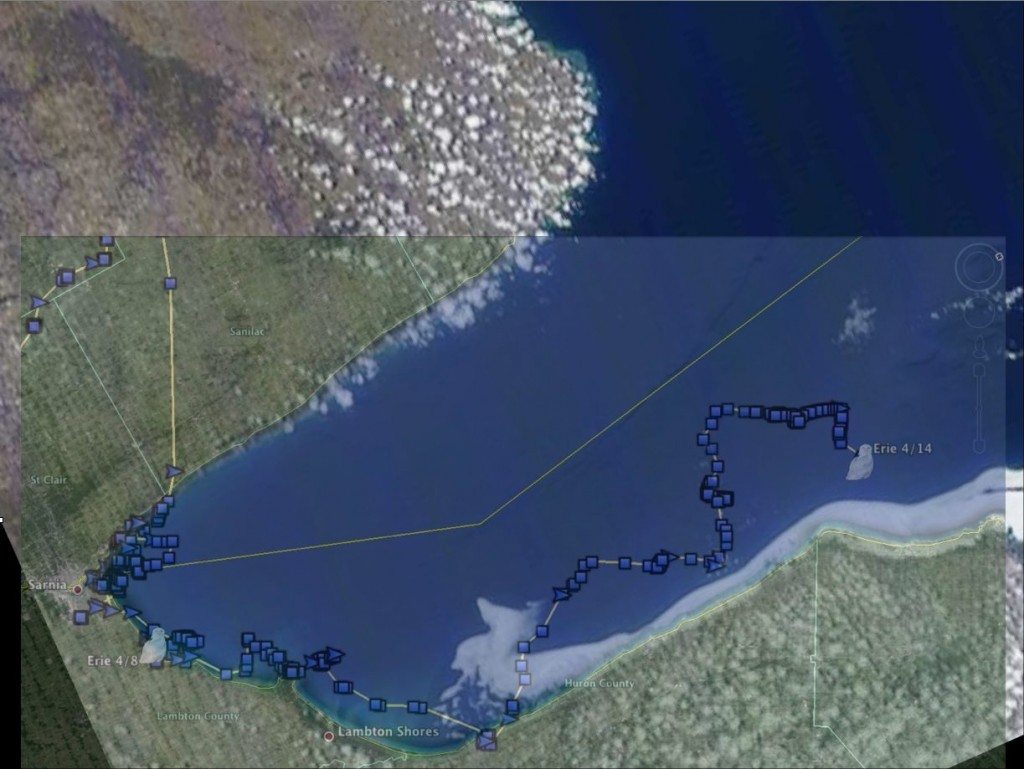 But when you look at his track overlayed on the most recent MODIS satellite image of Lake Huron, you’re liable to do the same double take I did. What’s he sitting on? From the satellite’s viewpoint 440 miles (705km) up, it looks like empty water, and he’s no duck. 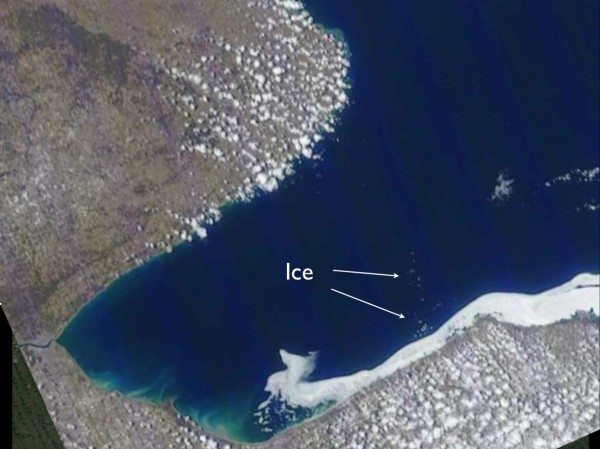 A closer look reveals what a satellite 440 miles up almost misses — the presence of ice floes and broken ice away from the shore-fast ice. (MODIS imagery from NOAA CoastWatch)

Remove the overlay of Erie’s map, though, and you can see what’s less obvious — an area of broken ice and floes right where he was spending much of the night of April 12-13. He’s not making like a duck after all, and there are plenty of smaller floes that won’t show up at all from that altitude, but are fine perches for an owl.

Another snowy that pushed north was Amishtown, who left the Lake Ontario shore the night of April 11 and flew about 60 miles (96 km) to Lake Simcoe, stopping off on the ice along the eastern shore, in almost the same spot where Braddock stopped off March 25. Then he moved up the lake to the peninsula hamlet of Bayshore Village for the better part of two days.

Braddock has left Prince Edward and flown about 30 miles (48 km) north into Hastings County, Ontario — and may have reached an important threshold, one many of our birds are coming close to. Take a look at this screenshot (below) from 19 miles in the air, showing his location (the map is rotated so north is to the right). 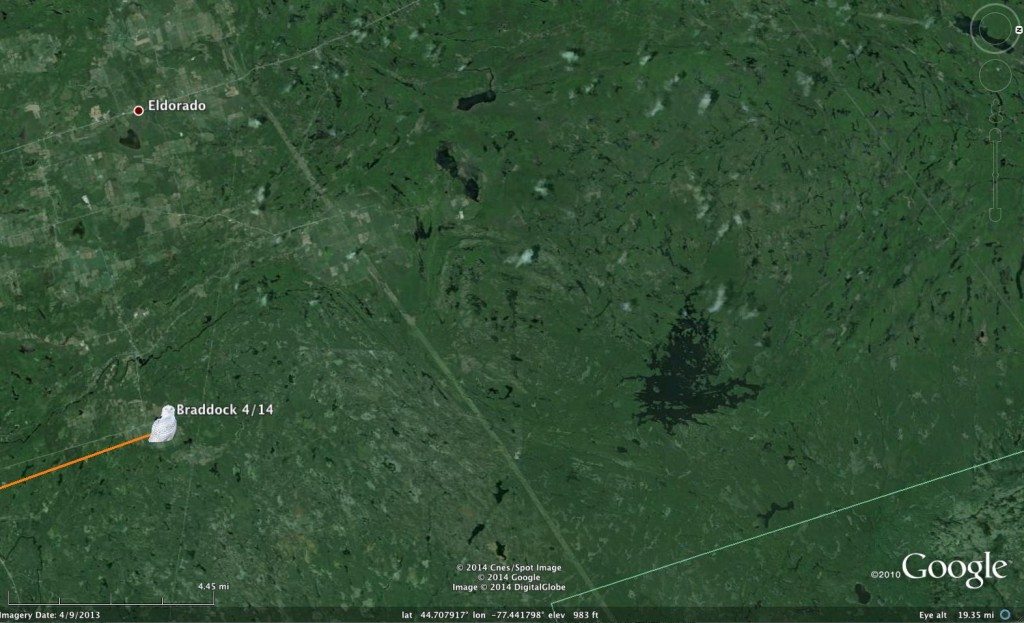 Braddock, on the last bit of farmland before the boreal forest begins. North is to the right. (©Project SNOWstorm and Google Earth)

Braddock spent the day Tuesday on one of the most northerly farms in that part of Ontario. If, when he leaves, he angles more to the northeast, in about 80 miles (130 km) he’ll hit the westernmost extent of farmland along the Ottawa River valley. But if Braddock goes straight north, it’s boreal forest — poor habitat for a snowy owl — for the next 400-500 miles (650-800 km), almost all the way to James Bay. 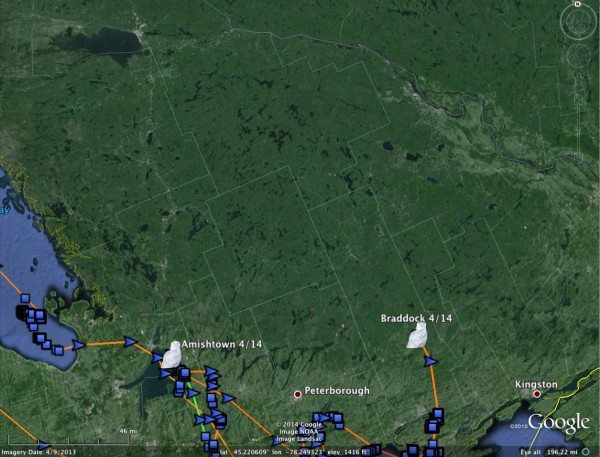 There’s not much except for trees for the next 400-500 miles north of Amishtown and Braddock. (©Project SNOWstorm and Google Earth)

As this screenshot shows, Amishtown is in pretty much the same boat — nothing to the north of Simcoe Lake except spruce forest. That’s not a problem for snowy owls; they crossed the boreal forest on the way south, after all. But I suspect once they start across it they’re going to push north hard and fast, trying to clear it as rapidly as possible.

Which means that when they do, they’ll be out of cell range very quickly. This map (below) shows cell tower locations in Canada. Southeastern Ontario, where the birds are now, has some of the best coverage in Canada, but it thins out dramatically about 150 miles (250km) to the north, which is one good night’s flight, or less, with a decent tailwind. Beyond that the towers are few and far between.

Cell towers get pretty thin, pretty fast, once you get out of southeastern Ontario — one night’s flight from where some of the owls are now.

Not every owl took advantage of the milder weather to migrate. Oswegatchie remained along the same railroad bed and farm fields near Cassleman, Ontario, where he’d been a day or two earlier. And Millcreek logged another 72 miles (116 km) of wandering on the eroding expanse of ice in eastern Lake Erie.

We drew a blank on the westernmost owls in this cycle. If Marshfield is still out on Mille Lacs Lake, that’s not surprising — there are only two or three cell towers there, all on the southwestern shore, and the lake is 16 miles (26km) wide.

Ramsey last reported in April 5 from southwestern Minnesota, a place with poor enough reception — and he’d been moving west toward South Dakota, where coverage is even spottier. Likewise, Kewaunee skipped this cycle, but given that owl’s earlier movements out on Green Bay, I’m not surprised.

All the map updates we have should be made Thursday — be sure to explore the latest movements in more detail.