I spend a lot of time at airports, but usually not like this — crouching next to a taxiway at Philadelphia International Airport, trying to keep a snowy owl from being killed.

Working with the USDA’s APHIS-Wildlife Services program and the Pennsylvania Game Commission, I was hoping to catch a snowy that had set up housekeeping at the midst of this enormously busy airport. Snowies love airports — the flat, open landscape must look like their Arctic home in an alien world of trees and hills, and many airports are close to coasts, rivers and marshes that provide a lot of owl food.

That’s how Steve Ferreri of the Game Commission and I came to be sneaking along the edge of a taxiway last Thursday, crouching beside the slowing moving truck of Wildlife Services technician Jennifer Dzimiela Martin.

The truck hid us from the owl, which sat on the far side of the taxiway beside the main runway, unperturbed by the immense noise of 737s landing every few minutes just yards away from it. We set up our bownet, slipped into the truck, and Jenny crept back about a hundred feet while I played out the trigger line to the trap.

Which the owl ignored, completely, for the next three hours. Birders often assume that snowy owls are diurnal — and they are, in the middle of the Arctic summer when there’s no darkness. In winter, however, they prefer to hunt after dark, and it wasn’t until the sun sank behind orange clouds and dusk settled in that this bird began to show some interest in its surroundings.

Still, it took another 45 minutes to lure the owl into the net; it kept zooming past the lure but not landing, and at one point, in a fit of nerves, I triggered the trap too soon and had to walk up to within 20 feet of the bird to reset it.

But eventually we were successful, and back in the quiet of Jenny’s office we banded and processed it. Opening the wings, which spanned almost five feet, we could easily see that this was a young owl, hatched this past summer — there were no contrasts between old and new flight feathers as would appear on an adult.

The owl was lightly marked, with spots rather than bars on the secondaries — suggesting it was a male, which its relatively small size (just 1,543 grams) confirmed. We took feather samples for DNA and chemical isotope analysis, and then carefully fitted him with a GPS transmitter. 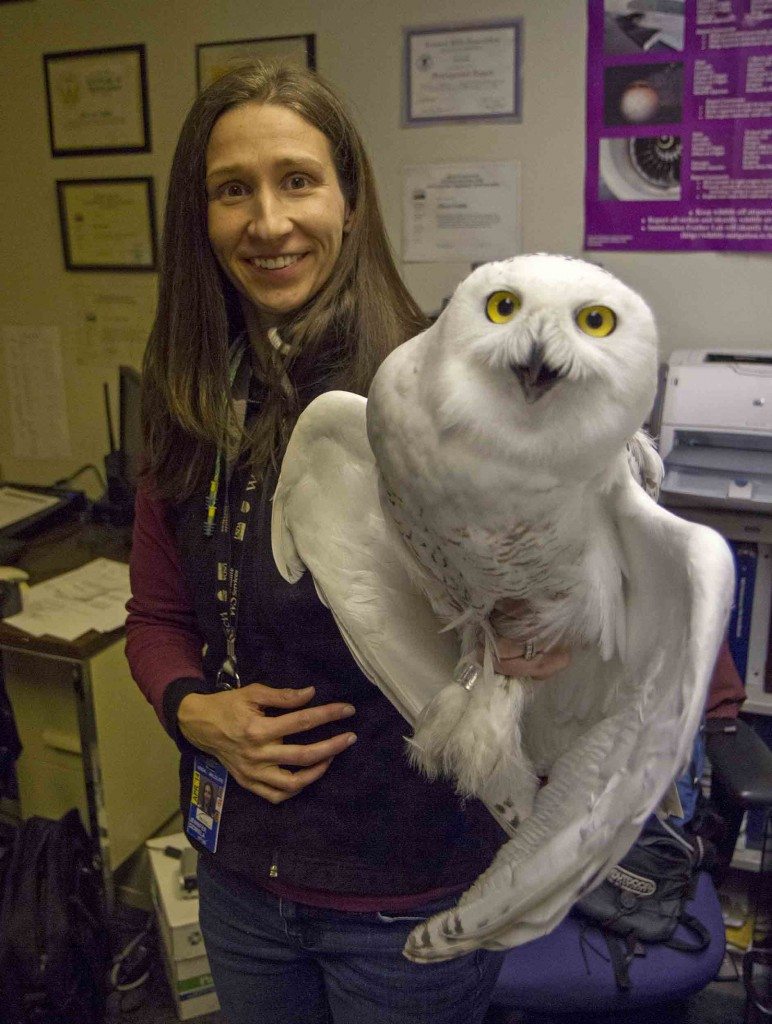 Releasing him at the airport might well be a death sentence. Snowy owls have been killed by plane strikes at some airports already this winter, and the risk to the planes (and their crew and passengers) is not insignificant, either. The FAA National Wildlife Strike Database shows snowy owls rank in the top third of species hazardous to aviation operations, based on damage to aircraft and negative effects on flight.

That’s why SNOWstorm collaborator Norman Smith, with Massachusetts Audubon, has already relocated more than 50 snowy owls this winter from Logan International Airport in Boston, a task he’s been fulfilling for more than 30 years — a win-win for the airport and the owls.

So Steve and I transported the owl — which we’re calling Philly — about 40 miles northwest of the city, to the rolling, open farmland of eastern Lancaster County, Pennsylvania. Norman usually moves the owls he catches 20-40 miles, so it seemed like a safe bet. 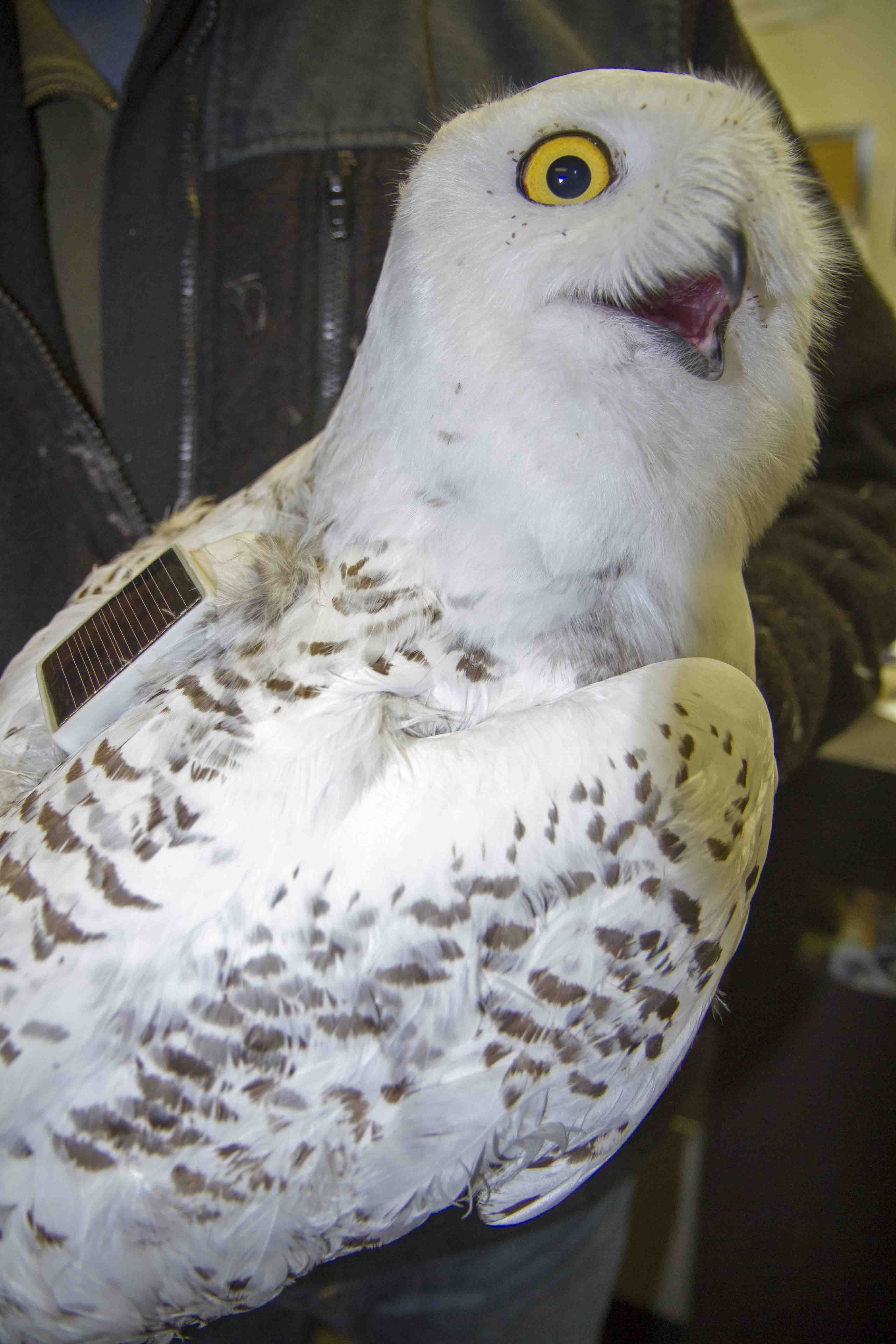 Philly and his transmitter (and some harmless feather lice around his eyes – the warmth brings them to the surface of the owl’s plumage). (©Scott Weidensaul)

The area where we released Philly has already been hosting several snowies this winter, and we hoped he’d find it to his liking. But when his transmitter (programmed to send data every third day) checked in for the first time on Sunday, we realized that Philly was very much a creature of his namesake city.

The first two days he lingered around his release site, then Saturday afternoon he moved to a recycling center off Rt. 322, and the top of the nearby Lancaster landfill. After dark, he was off — flying back to the southeast at about 35 mph, stopping every few miles to perch on Amish barns before taking off again.

By midnight he was flying along the Pennsylvania Turnpike, resting briefly on an office building, and later on the E.N. Pierce Middle School in West Chester. By daybreak Sunday he was sitting on a huge townhouse complex on Carriage Drive, just northeast of West Chester, where he spent the day.

Sunday night, though, Philly was on the wing again, and his last recorded position, when the transmitter made its upload at 7:30 p.m. that evening, was on top of a store at the Lawrence Park Shopping Center in Media, Delaware County — just 8.5 miles from the airport where we caught him.

His transmitter won’t check in again for a few more days, and our fingers are crossed that, instead of returning to the taxiway at the airport, he’ll fetch up somewhere farther down the Delaware River, or even move south along it to the safe, wide salt marshes of the Delaware Bay.

But that may be a false hope. You can take a snowy owl away from a dangerous airport, but you can’t make him stay away. We’ll continue to work with USDA Wildlife Services and the Game Commission to relocate any snowies that are in harm’s way at the airport — including, if we have to, one very persistent bird.