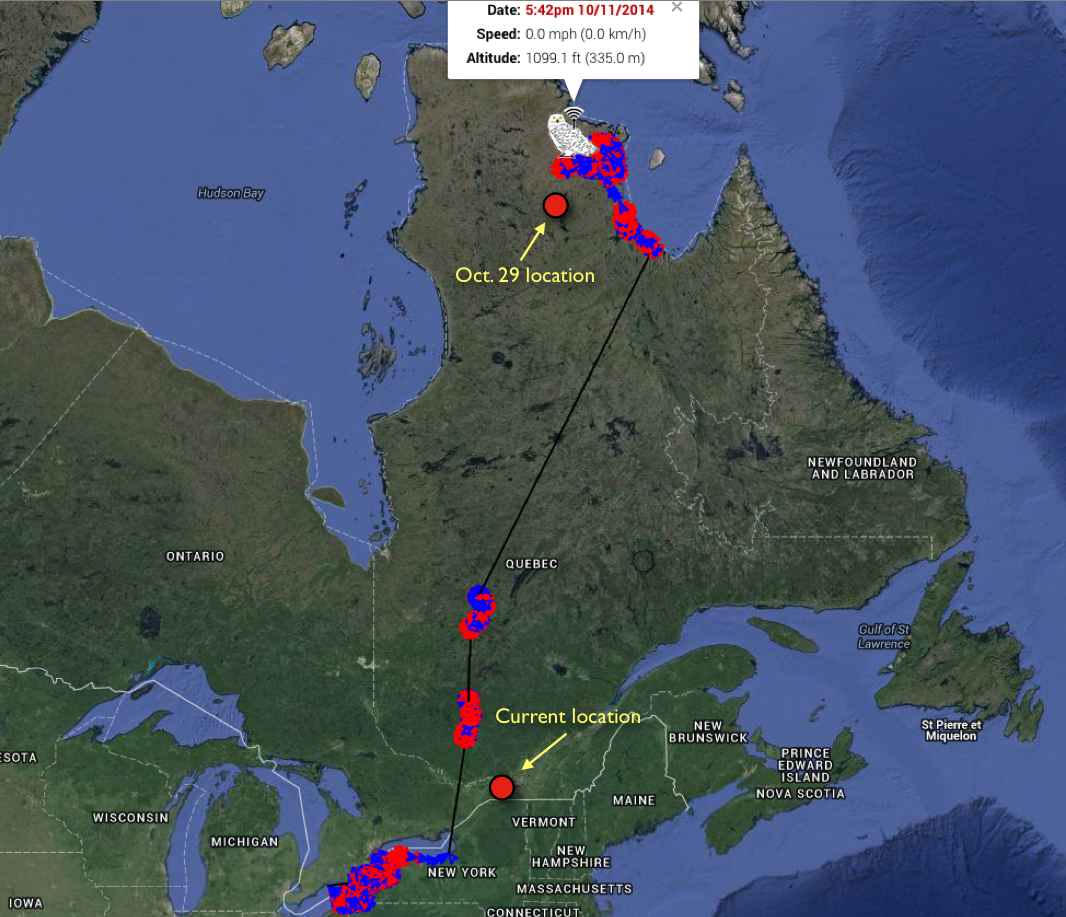 Millcreek’s movements through Oct. 11. Although his southbound data aren’t expected until Friday, we know he was still in the Ungava Oct. 29 — and is in southeastern Ontario now. (©Project SNOWstorm and Google Earth)

Last week, my phone suddenly went nuts — Mike Lanzone and Andy McGann at CTT, who make the transmitters we use, and Dave Brinker in Maryland, were all trying to call at the same time, with the same fantastic news.

This immature male snowy owl, which Mike and bander Tom McDonald had tagged last Jan. 20 in Erie, Pa., had just transmitted hundreds of locations. We’d last heard from Millcreek on April 23, when he was loafing on the fast-disappearing ice of Lake Erie, off the Buffalo waterfront.

Then his transmitter went dark, and we weren’t sure if it was because something happened to him, or because he moved rapidly beyond the southern Canadian cell network. (Remember, while our GPS/GSM transmitters collect locations every 30 minutes no matter where they are, and store those data for years, they can only send them to us when they’re in range of the GSM cellular network.) 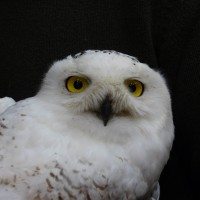 Millcreek, the night he was captured in January, near the Erie, PA, airport. (©Gene Ware)

Now we know it was the latter. Millcreek is the first of our 2013-14 class of snowy owls to migrate south again, back into range of the cell system. Never was a text message, so to speak, so welcome.

Because there’s so much stored information, it’s been coming through in chunks, covering about 30-45 days each. The first packet that Millcreek’s unit sent back covered his movements from April 24 to May 17. He crossed the Niagara River to Lake Ontario, then moved rapidly east around the lake, then north past Ottawa and out of the cell network.

By early May he was in southern Quebec, and slowed his pace as he wandered north, so that by May 15 he was about 190 miles (300 km) southeast of James Bay, and west of Lac Mistassini.

That initial, electrifying transmission last Wednesday only included about 600 locations, probably because Millcreek was in iffy cell range. But that night Millcreek’s unit sent a second, larger batch of data, this time covering the period from June 6-July 18. (We’re not sure why the late May and early June data didn’t come through, but we’re hopeful we can eventually recover it.)

By June 6, he had moved up to the base of Ungava Bay, more than 1,200 miles (1,980 km) from where he was tagged. From there, he flew even farther north, finally settling in on the subarctic tundra south of Cap Hope Advance at the edge of Hudson Strait. 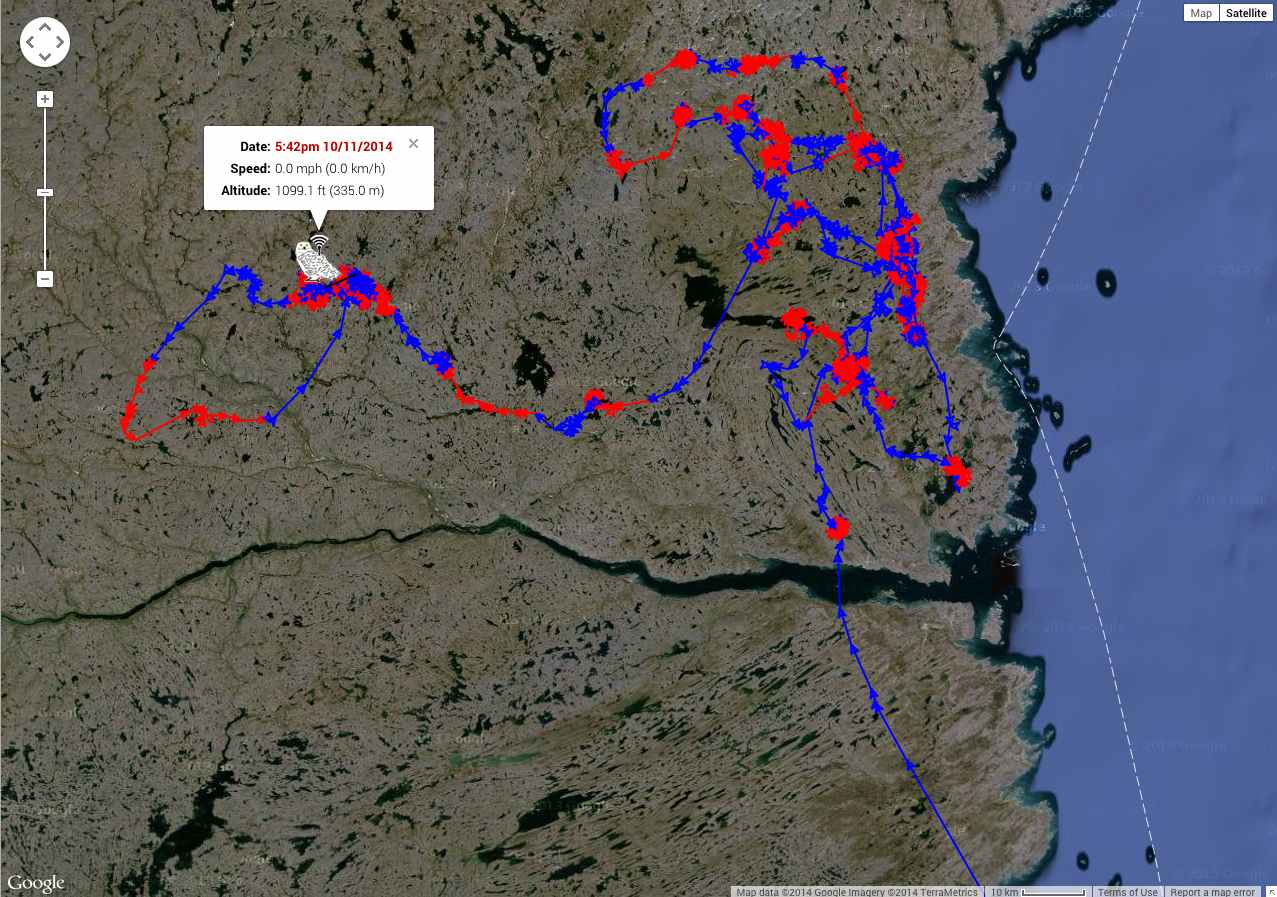 Millcreek spent almost five months on the tundra barrens of the eastern Ungava Peninsula in northern Quebec, near the Vachon River (and north of Payne Bay and the Arnaud River) by early October. (©Project SNOWstorm and Google Earth)

Saturday night was Millcreek’s regular transmission night, and his unit again sent another 1,800 locations, covering the period through end of August, as he continued to move around the myriad of small tundra ponds in that part of the sub-Arctic. And last night he sent another month and a half’s worth, up to Oct. 11. During that period he had moved about 65 miles (105 km) inland from the coast, near the brawling Vachon River.

It’s a dramatic landscape, one most people would find bleak and harsh — low, ice-scraped hills, permafrost just beneath the surface, no vegetation taller than ankle-high tundra barrens, snow fields that linger deep into summer, and countless small ponds and lakes gouged out of the bedrock by glaciers 30,000 years ago. But it may well be where Millcreek is from, since 2013 saw a record snowy owl nesting season in that region. Certainly, it looks like home to a snowy owl like Millcreek.

Where is he now? Although he hasn’t yet transmitted the most recent data covering his southward migration, the transmissions include a few “rough locations,” which lack the precision of the normal GPS coordinates.

One was for Oct. 29, when he was still in the Ungava. But his transmissions are coming from farm country in southeastern Ontario, right above the New York border in the St. Lawrence River Valley. The first were about 26 miles (42 km) northwest of Cornwall, Ontario, and by Saturday, he’d moved about 17 miles (27 km) southwest. At a guess, he may be working his way up the St. Lawrence toward Lake Ontario.

Interestingly, Millcreek is currently in much the same area where Oswegatchie was hanging out for a time in early April, just after heading north. Norman Smith’s earlier satellite tagging work in Boston showed this area is an important staging ground for northbound snowies.

Millcreek’s next transmission will be Friday evening, when we can reasonably expect to get the last installment in his stored data, bringing us up to date with his wanderings since last spring. We may decide to withhold his exact location to give him a little buffer, but in the meantime, everything through Oct. 11 is on his updated map, so you can follow his movements.

(For fun, enable the Panoramio feature on Google Earth and check out photos people have posted from the coast, and the Vachon River around 60.281 -71.789, to get a sense of this immense landscape.)

So, how many other owls from last winter will come back? We can’t say — several, many or none are all possible. We don’t know how many survived the northbound migration, or the Arctic summer — and not all snowies migrate predictably south every year. But the fact that Millcreek came back so early in the season certainly makes us hopeful that we’ll be getting similar surprises in the weeks ahead.

In the meantime, though, we’re closely watching the development of this year’s significant irruption, which is already perhaps two-thirds the intensity of what we experienced last year at this time. Interestingly, some of the owls showing up in places like Maryland are adults — unlike the almost uniformly juvenile invasion last year.

We have new transmitters arriving soon from CTT, and we’ll be deploying the first ones very soon. SNOWstorm colleague Norman Smith had already banded three owls at Boston’s Logan Airport a week ago, with more sighted there.

As always, Project SNOWstorm remains an all-volunteer effort, funded entirely by contributions by individuals and organizations. We’ll be launching a second Indiegogo campaign in early December, to cover the cost of additional transmitters and lab work, but you don’t have to wait.

If you’re as excited about this project as we are, and would like to support our work, you can make a tax-deductible contribution right now through the Ned Smith Center for Nature and Art (the 501 c 3 institutional home for SNOWstorm).

Every penny goes straight into the research — and we will be deeply grateful for the support. And to our American friends and colleagues, have a great Thanksgiving tomorrow.

37 Comments on “Millcreek is Back!”