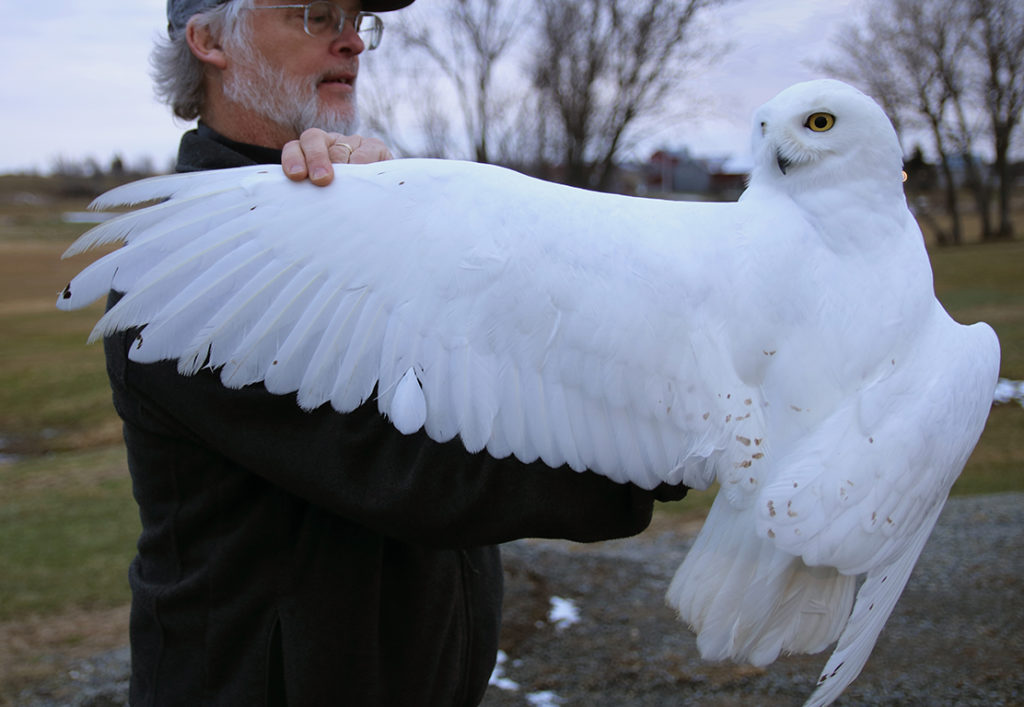 Some folks were taking it easy over the holidays, but not the Project SNOWstorm crew — and as a result, we have two newly tagged snowy owls to tell you about.

Selena Creed must have a thing about working holidays. She’s the wildlife biologist at Detroit Metro Airport (DTW) who caught Buckeye on Christmas Eve, allowing us to recover his old transmitter before she relocated him out of the city. Unfortunately, our plans to retag Buckeye went awry — but on New Year’s Eve day I got another urgent message from Selena. She’d recaptured a male owl that she had originally banded as a juvenile at DTW in 2017. Would it be possible to fit him with a transmitter before he was relocated?

Selena Creed releases Wolverine — with instructions to stay away from airport. (©Selena Creed)

It was, but it took some scrambling. I reached out to Kim Kaufman, the executive director of Black Swamp Bird Observatory down in northwestern Ohio, the folks who originally tagged Buckeye when that owl was captured at DTW in 2015. Would their director of research, Mark Shieldcastle — a former Ohio state wildlife biologist with a lot of transmitter experience — be available to tag the new bird if Selena brought him down? Kim and Mark responded with an enthusiastic yes, so I rousted David La Puma at CTT, which makes our transmitters, and despite the holiday he arranged a rush shipment to BSBO while the owl was temporarily housed at a rehabber in Michigan. 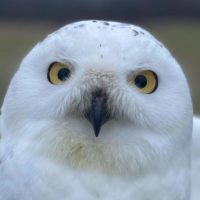 Wolverine, looking as fierce as his namesake. (©Selena Creed)

Last week Mark, Selena and BSBO staff tagged the new bird, whom they dubbed “Wolverine.” (Michigan is known as the “Wolverine State,” a nickname that predates college sports mascots, dating back to a border skirmish with Ohio in the 1830s.) While we usually name SNOWstorm owls for geographic places and features, this gives us a triumvirate of state nicknames: Buckeye in Ohio, Badger in Wisconsin, and now Wolverine in Michigan.

Selena released Wolverine in Oakland County northwest of Detroit, and since late last week he’s moved around a bit, spending time at a big sand quarry and ski area along I-75 and in the surrounding farmland. One concern is that he may continue north to Flint, where there is an airfield (Bishop International Airport), since we know he’s not put off by urban landscapes.

At roughly the same time the Michigan/Ohio folks were tagging Wolverine, SNOWstorm stalwart Tom McDonald and his colleague Melissa Mance-Coniglio were tagging another adult male in upstate New York. “Redwood,” named for a small town in Jefferson County, is a breathtaking, almost entirely white bird whose capture came after a typically long and frustrating day.

“Snowy owl trapping is hardly ever a cut-and-dried undertaking,” Tom emailed me.  “Achieving any measurable amount of  success in the field usually comes with a price. Common denominators include long, hard days on the road that often start at 3:15 in the morning and at times, last well after midnight. Adverse weather conditions, like high winds, blinding snow squalls, ice and extremes in temperature. A myriad set of complications that come with finding an owl and getting a suitable trapping setup on a snowy… and the list goes on.” This was one of those trips.

Tom and Melissa, working in separate vehicles, left Rochester, NY, the night of Jan. 1-2 to make the 200-mile (321-km) drive to Tom’s longtime research area on Cape Vincent at the eastern corner of Lake Ontario, just south of the Ontario border. Melissa stayed with her uncle Ernie Mance, Tom at a motel in Watertown, both hoping for a fair night’s sleep. “A ‘fair night’s sleep’ is an arbitrary term,” Tom said, “depending on how much time you stayed awake thinking about how you were going to capture your owls the following day.” 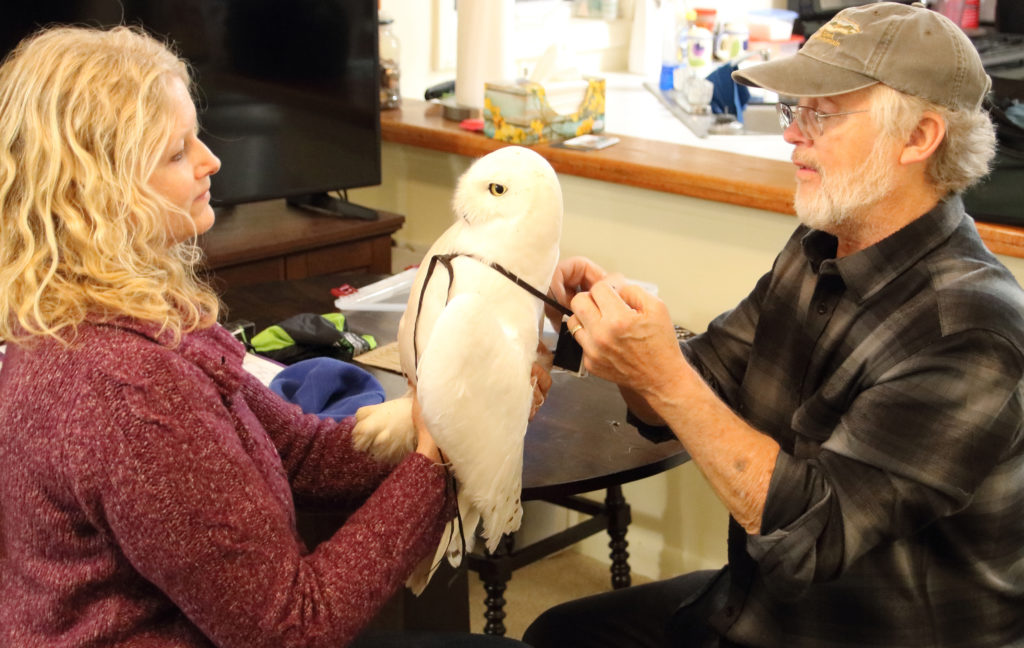 Melissa and Tom fit Redwood with his transmitter. (©Ernie Mance)

They were in the field before daybreak, watching carefully for the sihouettes of owls perched on utility poles or other structures, hunting in the final hour before daybreak. “Two factors were already playing against us however, as high winds and warm temperatures were forecast for later in the day — conditions that generally force owls to abandon higher perches and look to find lower vantage points, or head to roost on the ground for the remainder of the day. The warmer temperatures temporarily bring a lot of little critters out of their comfy winter homes, and offer quick and tasty treats for the owls and compete with any lure offerings we might present at our traps.”

Melissa was the primary trapper, while Tom scouted. There were plenty of snowies. “By 7:30 a.m., roughly 15 minutes after the sun broke the horizon, we had already located seven snowy owls,  set up on four of them, watched three of them  go to roost early — and caught none! As the day progressed, things didn’t get much better. And although we found five more owls throughout  the course of the day, the stars did not line up for us.” 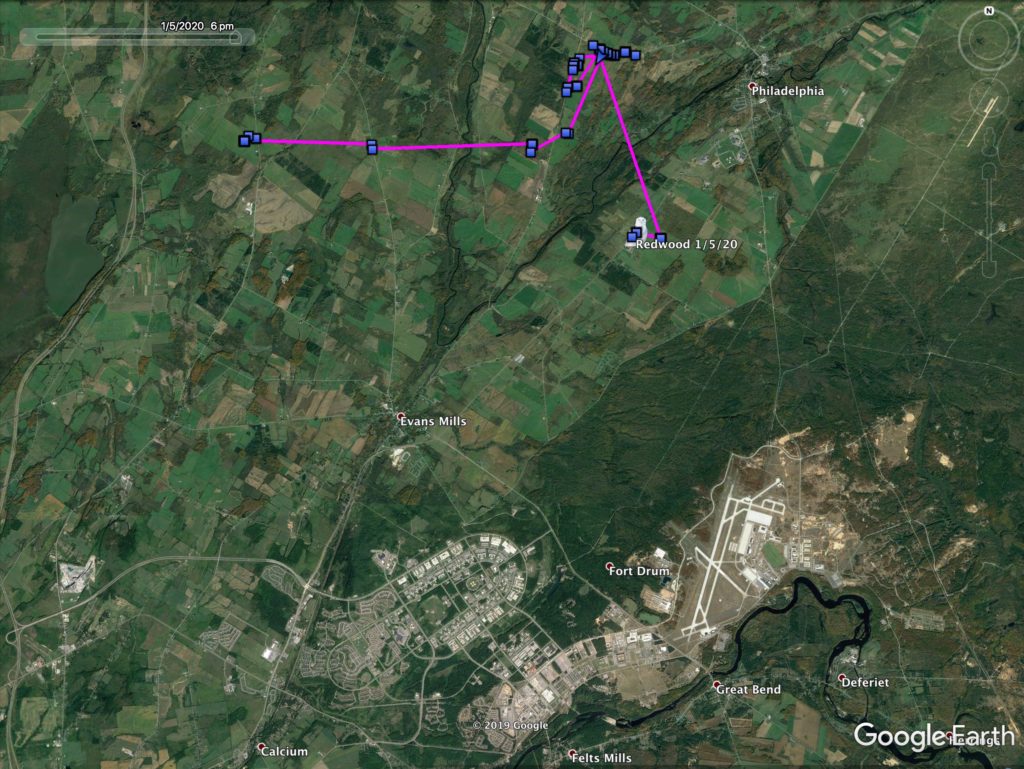 Redwood has stayed in the farmland of Jefferson County, NY, since he was tagged — and so far is avoiding the airfields at Fort Drum just to the south. (©Project SNOWstorm and Google Earth)

That’s when they found Redwood. Melissa had located this brilliantly white owl several weeks earlier, but he’d proven difficult to locate. This time, unfortunately, he was perched more than 400 yards (365 m) out in an open field along a heavily traveled road, much too far to have a reasonable chance of catching. It was getting dark, and they had the long drive to Rochester still ahead of them.

“Just as we were about to say goodbye, he flew up on to a power pole near the road, just yards away from Melissa’s car. She hastily set up a rig for the owl well away from the traffic, and the owl was fascinated with her handiwork. He was captured within 10 minutes. The snowy owl gods work in mysterious ways,” Tom said. “We hurried Redwood down the road to Uncle Ernie’s house, about 10 minutes away, and found the bird to be a great candidate for a transmitter. He proved to be a very calm and accommodating captive and the fitting process was smooth and flawless. We released him on a rarely used farm road about two miles from his original capture site.” 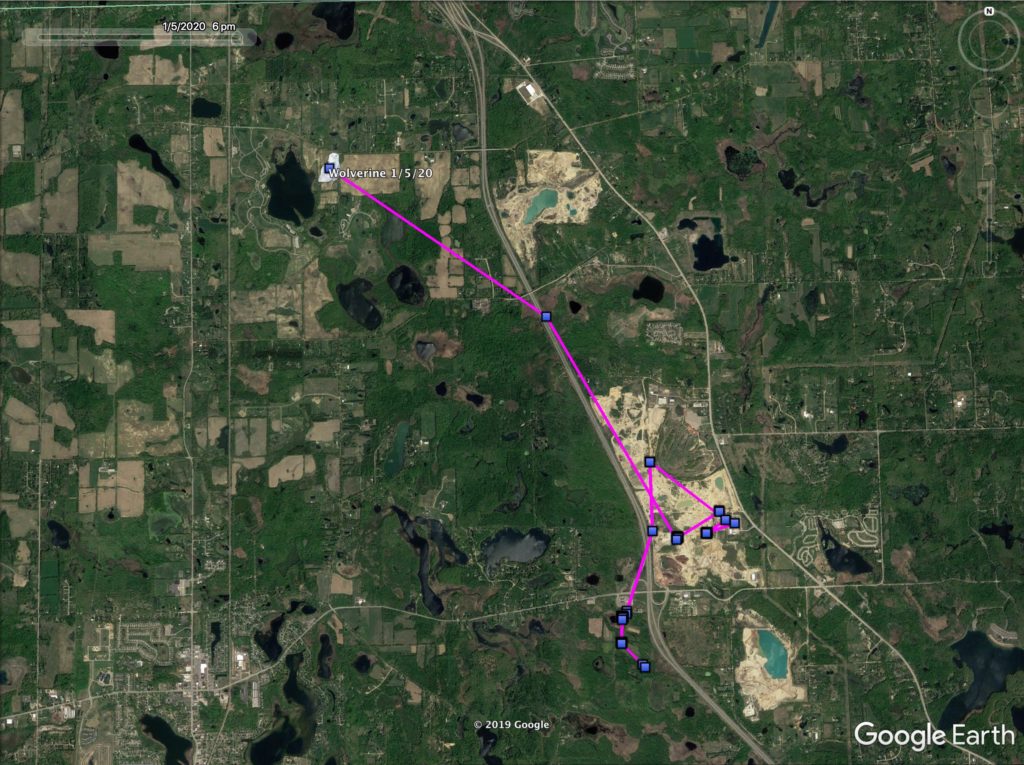 Drivers along I-75 in Michigan may have been able to glimpse Wolverine over the weekend. (©Project SNOWstorm and Google Earth)

Maps for Wolverine and Redwood, as well as Coteau (who was tagged in North Dakota at Christmas time), have been posted. And next time, we’ll bring you up to speed on how the rest of the 2019-20 crew have been doing in the new year.

9 Comments on “Wolverine and Redwood”