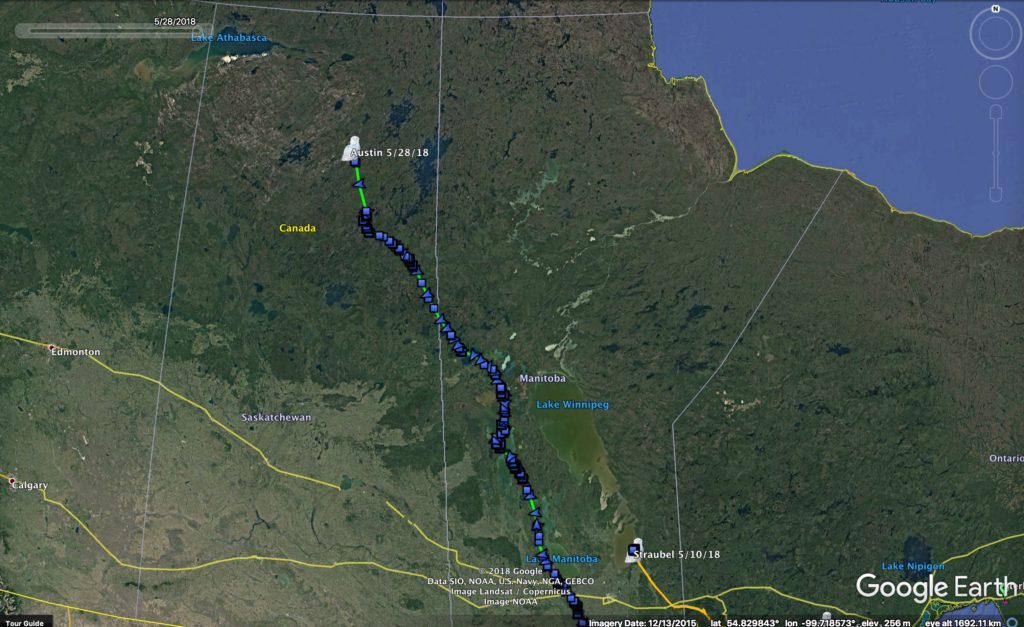 After being off the grid for almost three weeks, Austin checked in in northern Saskatchewan this week. (©Project SNOWstorm and Google Earth)

Although we suspected the season was over, last night (May 28) we got a great surprise when Austin checked in for the first time in almost three weeks — with almost 900 backlogged data points, a real treasure-trove.

The last time we heard from this juvenile male, who wintered in central Wisconsin, he was just over the Canadian border in southern Manitoba. Since then, we now know, he’s continued to move northwest, traveling 1,183 km (735 miles) — along and across Lake Manitoba and Cedar Lake May 15-20, and on May 23 overflying the mining center of Flin Flon, which sits astride a weird little dogleg in the Manitoba/Saskatchewan border. 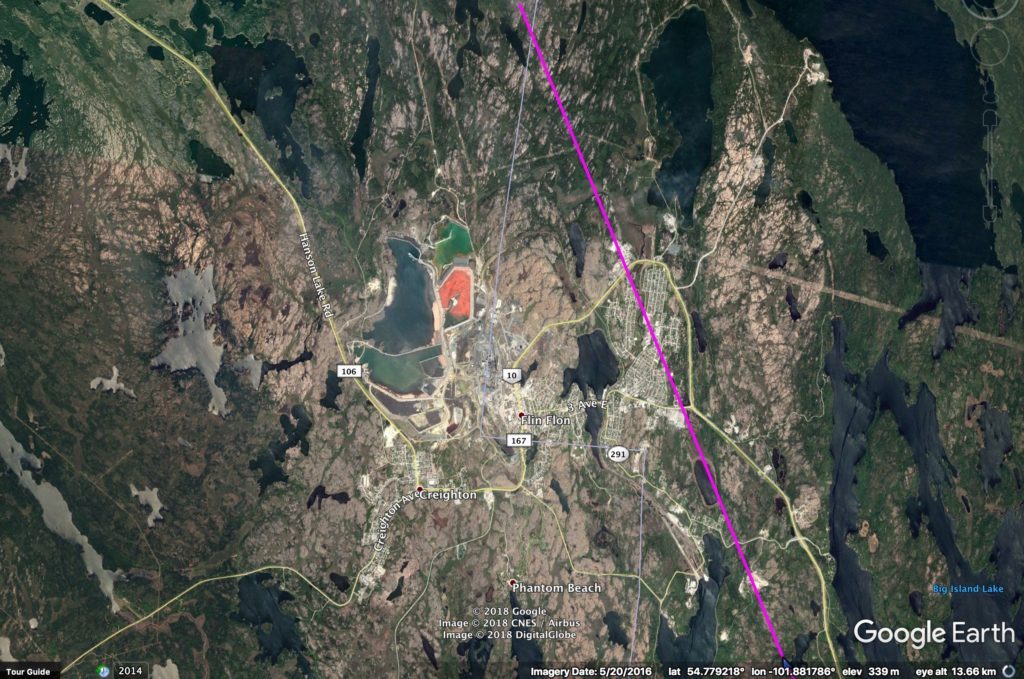 Austin’s track through Flin Flon, past the technicolor waste ponds at the huge mine west of town. (©Project SNOWstorm and Google Earth)

(The town’s odd name has two equally odd explanations. The popular one: In 1914 a prospector named Tom Creighton — having read a science fiction dime novel about a character named Josiah Flinabbatey Flonatin, who pilots a submarine through a bottomless cave full of gold — named the mine he and his partners had just established “Flin Flon’s Mine,” and the name stuck. The more likely factual: In 1929, according to the town’s official website, the Canadian National Railroad telegraphed the Hudson Bay Mining and Smelting Company, which ran the huge open-pit mine, to ask for an official name for the town. “They say they will call it Flin Flon if they don’t hear from us,” the diary of the telegraph operator noted. The mining company never responded, and the CNR carried through on their promise. Frankly, though, both stories could be true.*) 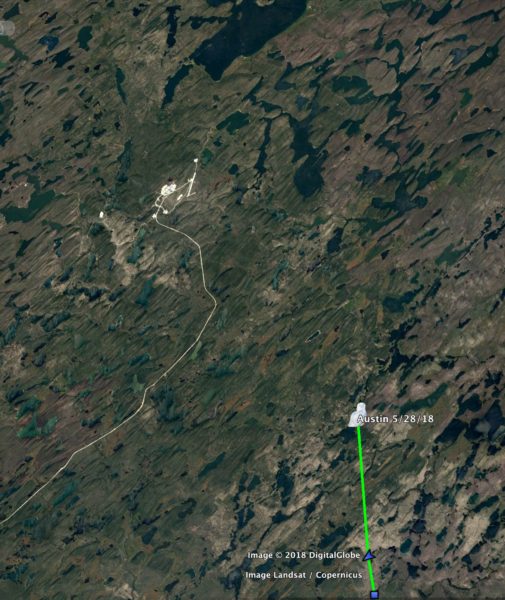 Monday night, Austin was not far from the McArthur River uranium mine, among the largest such mines in the world. (©Project SNOWstorm and Google Earth)

Along the way, Austin has passed a number of other small communities and mines, but was apparently never in cell range at the times his transmitter was programmed to phone home — until Monday evening. He happened to be almost equidistant between Reindeer, Wollaston and Creek lakes in northeastern Saskatchewan, and only 20 km (12 miles) from the McArthur River uranium mine, the world’s largest deposit of high-grade uranium and the largest-producing such mine in the world. Sasktel has a few cell towers in the region, and Austin’s unit was able to connect to one of them.

If he keeps on his current heading, Austin is only about 270 km (165 miles) from the Northwest Territories. There are plenty of small settlements and mines between here and there, but as with this latest transmission, any further news is going to be a matter of luck. And of course, he’s not the only owl out there — we have more than two dozen others moving north, and we might get lucky with any one or more of them. If we do, we’ll be sure to let you know.

*Completely random personal aside: In 1997, I was heading to Churchill, Manitoba, to spend a month leading polar bear-watching trips, when my flight was diverted by bad weather — to Flin Flon. We spent a couple of hours knocking around the small airfield, watching ravens and magpies, and chatting with locals who were happy to share the fact that their town in one of just two in the world (along with Tarzana, California) named for a science fiction character. Sadly, we never made it into town to see the statue of “Flinty,” the intrepid undersea explorer, designed by cartoonist Al Capp. Maybe Austin did a low fly-by on his passage through Flin Flon and got a glimpse.

On the Shores of Great Slave
The End?