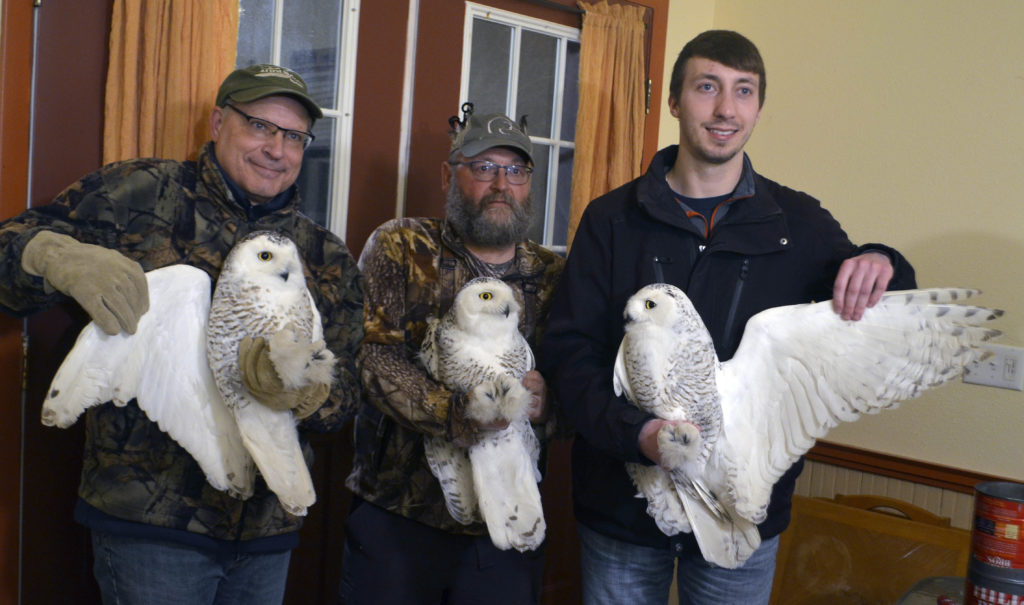 Wisconsin has been an important study area for us since we launched Project SNOWstorm, and it remained a priority region for us this winter, with plans to deploy two transmitters there — either on snowy owls relocated from Fox River valley airports, as we did last year, or individuals trapped on farm fields and grassland in the Badger State.

It proved to be tougher sledding than we expected, though. Our longtime collaborator Gene Jacobs was able to catch and tag Columbia at the end of January near Audubon’s Goose Pond Sanctuary in Columbia County, assisted by Mark Martin and colleagues with Madison Audubon, which had previously sponsored the transmitter. 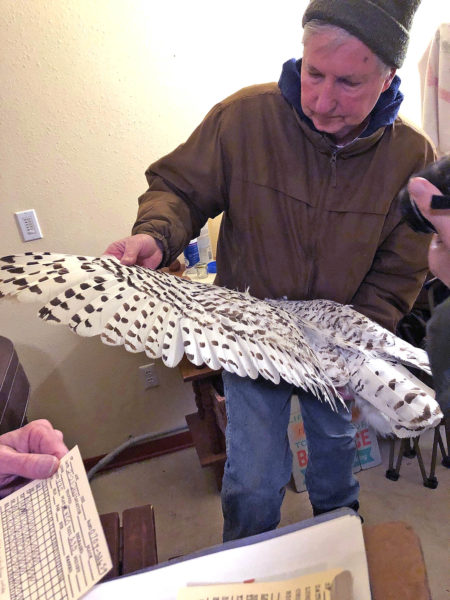 Gene Jacobs reading wing molt (and thus ageing the owl) on one of the three snowies caught that evening. (©Rick Vant Hoff)

But we also had a transmitter sponsored by an anonymous donor to Fond du Lac Audubon — and in February, the early luck Gene had dried up. (This is not entirely surprising, because this wasn’t an especially heavy flight year for snowies in the Great Lakes region.)

With the clock running down, though, Gene kept trying. He had made three more unsuccessful trapping attempts, and the folks at Madison airport also came up dry in multiple attempts to trap and relocate airfield owls.

All that changed the weekend of Feb. 22-23 when Gene — with help from Mark and a number of members of the Horicon Marsh Bird Club — tried a new area near Waupun, WI, where several snowy owls had been reported. A number of Madison Audubon and Horicon Marsh Bird Club members — Pat, Ben and Angel Clark, Suzanne and Jeff Bahls scouted locations on the farmland around the former Mackford Prairie on Saturday, locating seven snowies. 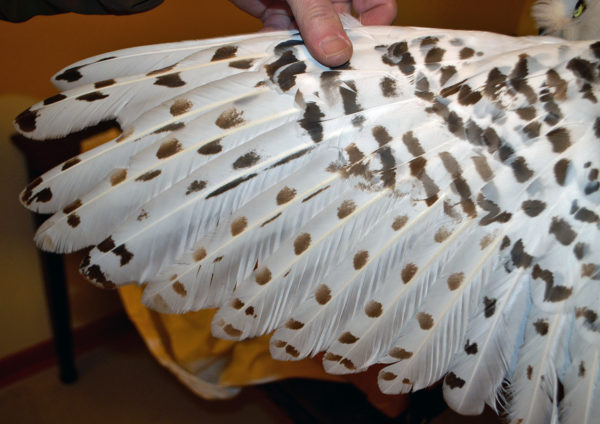 Sunday afternoon, Feb. 23, Gene met the crew and split into two teams, hoping to increase their chances of getting an owl. Gene headed up one team including J. D. Arnston, Rich Armstrong and Rick Vant Hoff, with his colleague Brad Zinda from the Linwood Springs Research Station taking the other with Bahls, Mark Martin and Richard Armstrong. The split approach worked better than anyone expected. Gene’s team quickly captured two, while Brad’s caught a third — an owl-fecta, as it were. All three were taken to Rick Vant Hoff’s house for processing, with the second owl that Gene had captured, a fourth-year female weighing 2,122 grams (4.7 lbs.), receiving the transmitter.

Fond du Lac, getting ready for her transmitter. (©Rich Armstrong)

We’ve nicknamed her Fond du Lac, in honor of her transmitter’s sponsoring organization. Since she was tagged, she’s been staying close to her original capture site a bit east of Lake Maria in southern Green Lake County, using a fairly small area of about 800 acres (340 ha) of corn and alfalfa fields. But don’t take our word for it — her map is posted, so you can check out her movements for yourself.

We’re very grateful to Fond du Lac Audubon and their donor for their generosity (and their patience), and to Mark and Sue Foote-Martin and the whole crew from Madison Audubon and the Horicon Marsh Bird Club for their enthusiasm and assistance. 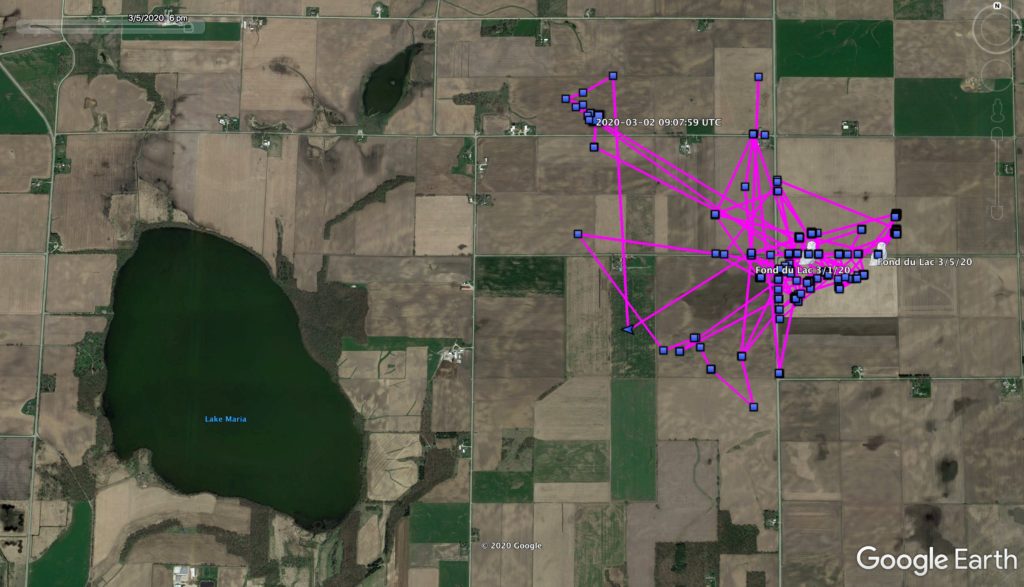 Since her release, Fond du Lac has been sticking tight to her capture area, east of Lake Maria in southern Green Lake County, WI. (©Project SNOWstorm and Google Earth)

8 Comments on “Fond du Lac, and the Owl-fecta”