A snowy owl, perched up in a tree as it starts its evening hunt, is silhouetted along with one of the 26 wind turbines on Amherst Island. (©Rebecca McCabe)

Sometimes science happens thanks to careful planning, and sometimes opportunities unexpectedly present themselves. Our two newest tagged owls are examples of the latter — although the serendipity in question has taken longer than expected to blossom. 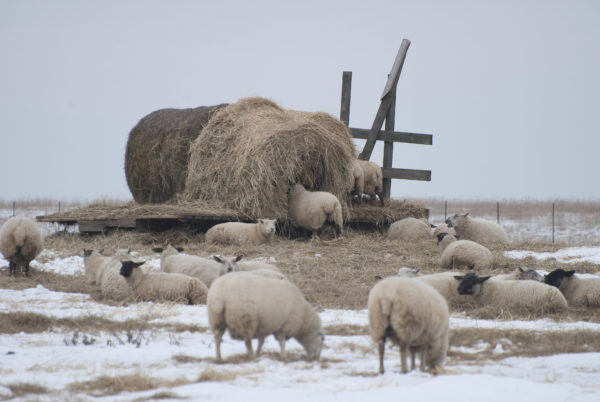 Owls are not the only white(ish) creatures on Amherst Island. (©Rebecca McCabe)

Amherst Island, at the northeastern corner of Lake Ontario, has long been famous as a winter owl hotspot — not just for snowies, but for a host of northern species, including short-eared, long-eared, saw-whet, boreal, great gray and northern hawk owls, many of which use its famed “Owl Woods” tract of forest. (The island’s also a reliable spot for diurnal raptors like rough-legged hawks and northern harriers.) From the start, a number of the snowies we’d tagged elsewhere gravitated to Amherst’s flat, open farmland, either as a way-station on migration or, like Baltimore, as a winter-long home. 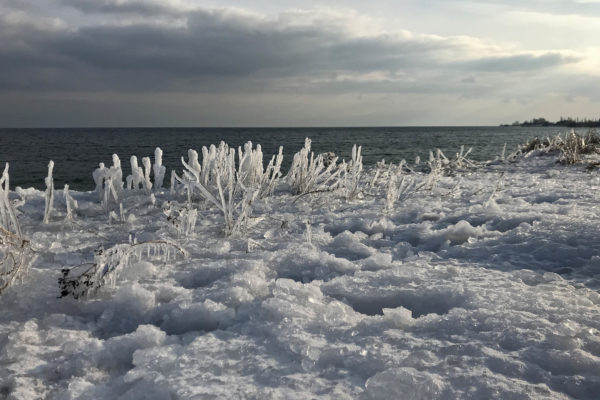 Because of Amherst’s reputation as a raptor hotspot, there was a lot of concern and consternation both in birding circles and among many local residents when construction began on 26 immense wind turbines. Would the spinning blades present a danger to snowy owls? And even if not, would the mere presence of the enormous, looming structures change the behavior of the owls, as has been documented with some other species of open-country birds?

We realized a natural experiment had fallen into our laps. We already had a significant data set of owl movements on Amherst before construction; by tagging additional owls on the island, we might be able to compare before-and-after patterns to see if the turbines were having an effect.

In January 2018, even as construction was underway, we tagged two female snowies on the island, Stella and Emerald. Last winter we tried to trap and harness additional owls, but came up dry. But we don’t give up, and so last month a team headed up by our McGill University Ph.D. student, Rebecca McCabe, was back on the island trying again.

Becca had plenty of skilled help — Charlotte England, a raptor bander with the Simcoe (ON) County Banding Group (assisted by her friend Chris Wagner), and our longtime colleague David Okines, now retired from the Prince Edward Point (ON) Bird Observatory. Once again, they had a lot of help and support from the terrific community on Amherst, including local “bird lady” Janet Scott and many landowners who granted permission to enter their property.

Amherst has the updated version of CTT’s hybrid Argos/GSM transmitter, which communicates both through the GSM cell network, as well as the Argos satellite system. (©Rebecca McCabe)

Unlike some previous years, when vole numbers on the island were high and snowy owls were abundant, there were only about eight snowies on Amherst when the team arrived. By contrast, there were 16 snowies on the island last winter, and 26 the winter before. Just in case, though, the team carried three transmitters, including a new version of CTT’s hybrid Argos satellite/GSM cell transmitter, with which we first experimented last winter. And they knew that time was short — they only had two full days for trapping.

“Our first full day of trapping began with an early, 5:30 a.m. wake-up on Saturday, Feb. 15,” Becca said. The crew split into two trapping teams, one covering the north shore and the other south shore. “We drove around, scanning and attempting to trap the very few owls we did see, but no luck.” After a midday break, they set out again around 3:30 p.m. to be in position at dusk, when snowies begin to stir and think about some breakfast. “It was a beautiful sunset and the owls were starting to get up and move. At 5:30 p.m. my phone rang and it was David — he’d caught the first owl, an ASY [after-second-year adult] female, and a great candidate for the hybrid unit.” 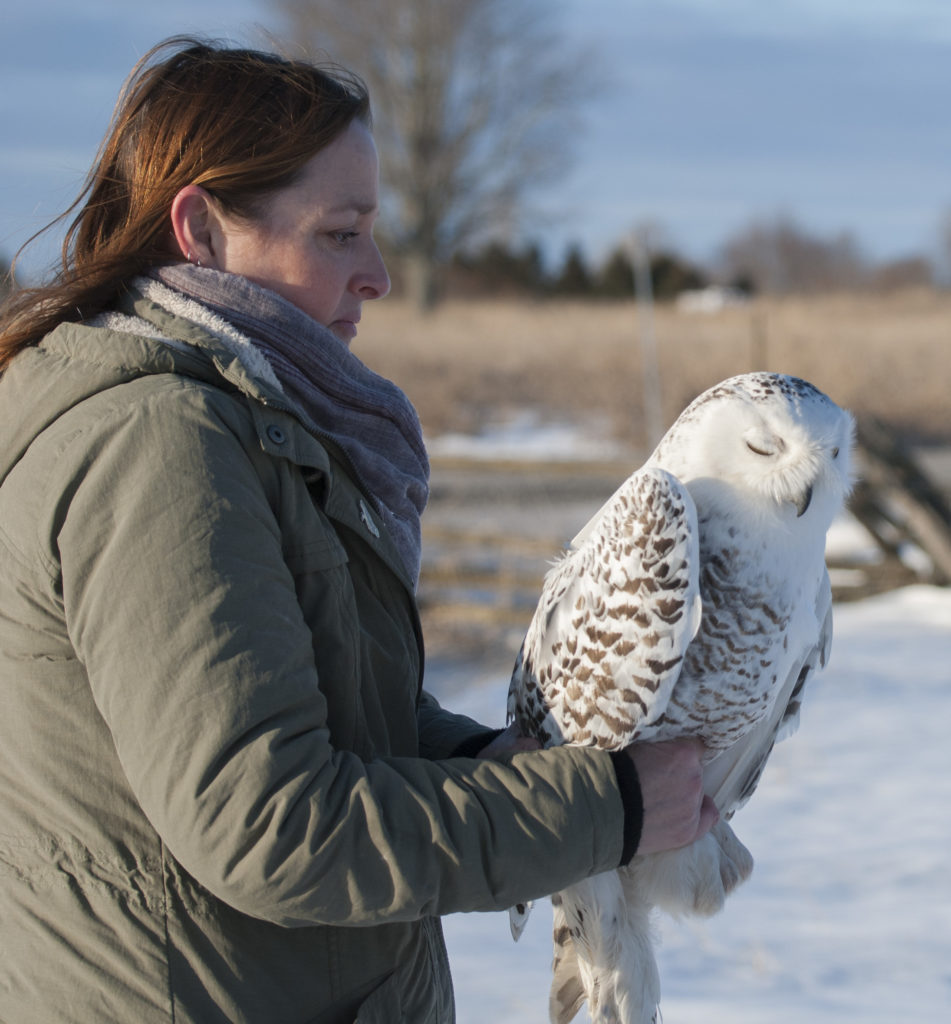 That first-day luck seemed to evaporate the following day, though. The team set up for owls at daybreak Sunday, but with no success. Dusk was likely to be their last real chance, so they split up again — Becca driving the island looking for owls perched up high and near the road, where they’d be easy to lure; Charlotte and Chris working an owl near the north shore, and Dave setting up on two snowies on adjacent sites. All to no avail — none of the owls responded, and the crew came back to the place they were renting, tired, cold and dejected. 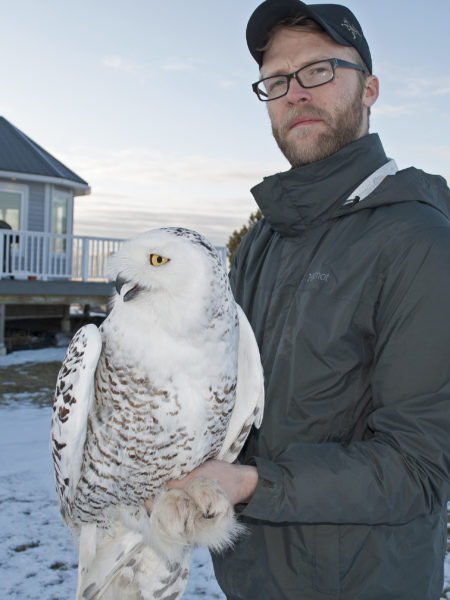 They decided to give it one more try before they had to catch the 9 a.m. ferry Monday morning. “We set out before sunrise and searched the island for suitable owls to trap,” Becca said. At 7 a.m. I got a call from Charlotte — they’d trapped a female!” Charlotte and Chris were about to give up on this particular owl — in fact, Charlotte had just gotten out of the car to pick up the trap when the snowy bombed in and was caught. The team quickly reassembled, fitted the new owl with a standard GPS/GSM transmitter, and still managed to catch the ferry.

The new owls are Amherst, the adult female carrying the Argos hybrid unit, and Simcoe, a fourth-year female named both for neighboring Simcoe Island and as a nod to  the Simcoe County Banding Group for their continuing assistance. In just a few weeks, we’ve seen dramatic differences between these two owls — both females, both adults — that remind us why tracking these birds is such an endlessly fascinating experience. 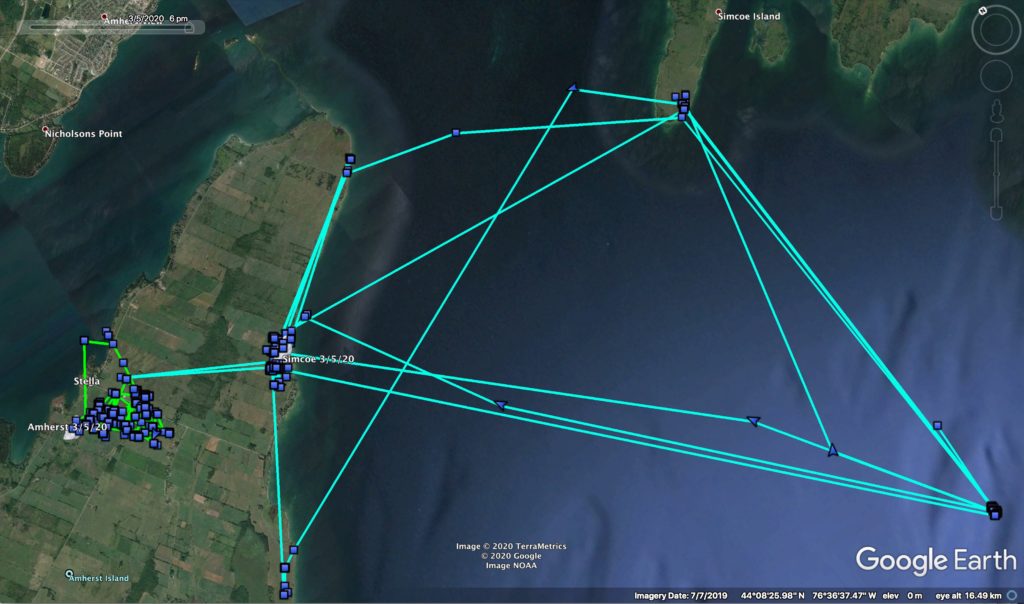 Amherst has been a homebody; she’s pretty much stayed within a 122-ha (300-acre) area near the village of Stella, and moved a total of 47 km (29 miles) within it. Simcoe on the other hand, has logged almost three and a half times as much distance — 161 km (100 miles) of flight, using the south shore of the island as a base but frequently flying as far as 13 km (8 miles) out into the lake to Pigeon Island, a 5-ha (12-acre) flyspeck with a lighthouse and a history of causing shipwrecks. She’s also made a number of trips to her namesake, Simcoe Island, to the east of Amherst, and a few flights up and down Amherst itself.

Why? That kind of variation in the same habitat, by owls of similar ages and sexes, is something we’ve seen again and again. In the end, our suspicion is that snowy owls are just very individualistic — and this makes them even more interesting to follow, which you can do by checking out their maps yourself.

Fond du Lac, and the Owl-fecta
Tribute to Bob Gallagher

5 Comments on “At Last, Sweet Success on Amherst”