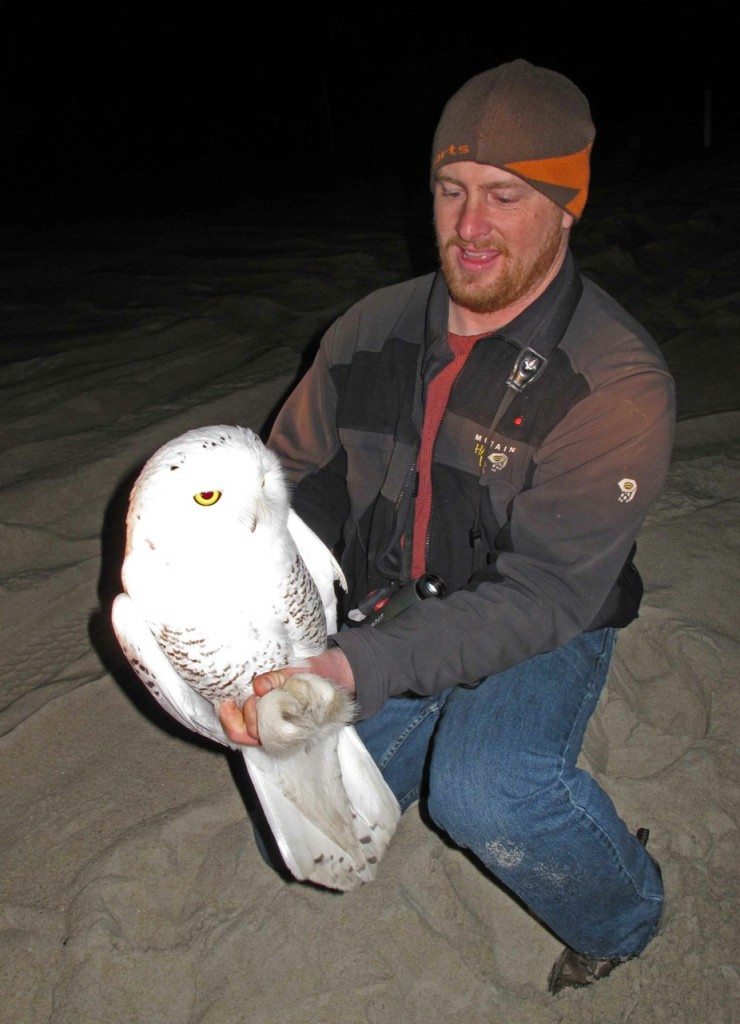 On this day five years ago, my phone rang not long after breakfast. It was my friend and colleague Dave Brinker, a biologist with Maryland’s Natural Heritage program. He was calling because of something we’d both been watching with growing interest and amazement — the almost unprecedented invasion of snowy owls coming south into eastern North America, which was playing out across birding listserves, eBird and other information outlets.

The numbers were incredible. Just a week earlier, a birder in Newfoundland had reported counting nearly 300 snowies in one small area at Cape Race — 75 of them visible in a single sweep of his binoculars. White owls were showing up as far south as Jacksonville, Florida, and on the island of Bermuda.

“None of us are going to live long enough to see something like this again,” Dave said. He’d been talking with another mutual friend, owl bander Steve Huy, and they had some ideas — recruiting other banders to try to trap and band snowy owls to help track their movements, or maybe soliciting photographs from the public, which would allow us to age and sex many of the owls to get a sense of where the different age- and sex-classes were wintering.

That was plenty to think about, but not long after I hung up, the phone rang again. This time it was Andy McGann, who in 2007 was an intern on my saw-whet owl banding project, and in 2012 had worked for me again as a research technician while Dave and I tested a new type of automated telemetry system for small owls.

Andy was now working for Cellular Tracking Technologies, a company founded by golden eagle biologist Mike Lanzone to build next-generation GPS transmitters. Andy asked me if I’d been following the news about the snowy owl invasion. “Because, um, we have a transmitter here that was built for another project — but Mike said if you can find some funds, just enough to cover our costs, we’d love to put it on a snowy owl instead,” he said. 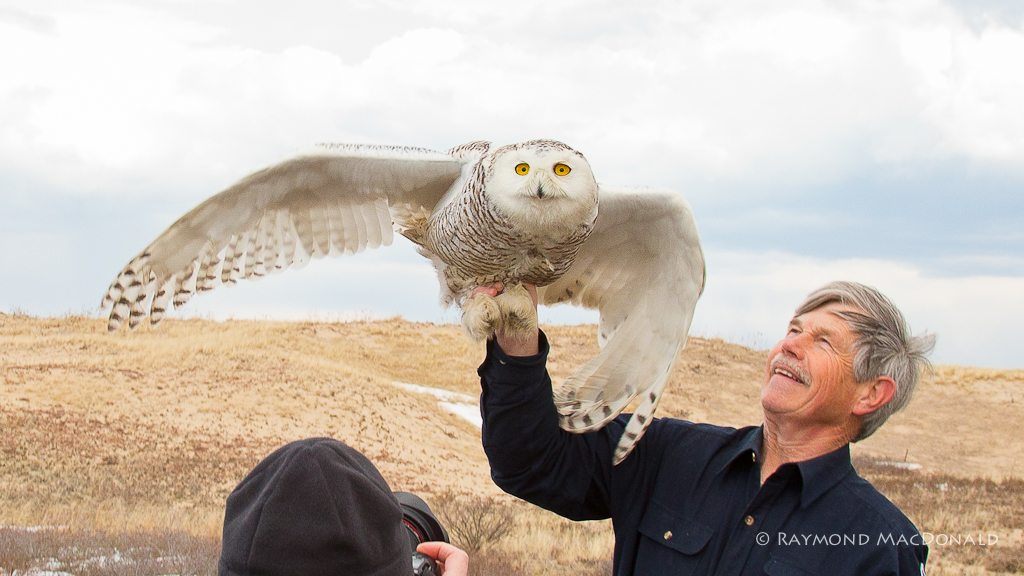 That was the beginning of Project SNOWstorm — and it snowballed (no pun intended) was stunning speed. By the evening of Dec. 7, 2013, I had spoken with a longtime supporter of our saw-whet work, the late Jim Macaleer of West Chester, Pa., who had agreed to underwrite not one but five transmitters. The next day, anonymous friends and fellow researchers had matched that gift with one of their own. We’d reached out to our good friend Norman Smith in Massachusetts, who has been studying snowy owls since 1981, who enthusiastically joined the effort. Along with Steve, another former research tech of mine, Drew Weber, brought web savvy and know-how. Jean-François Therrien, a French-Canadian researcher who did his Ph.D. on snowy owls in the Arctic and who now works here in Pennsylvania at Hawk Mountain Sanctuary, jumped in with both feet. The proposal we submitted to the U.S. Bird Banding Lab for authorization to tag and track snowy owls was approved in record time, since the BBL was already looking for someone to do just that kind of project.

Less than two weeks later Dave, JF, Mike and I gathered along the  Maryland coast, where we trapped “Assateague,” a juvenile male and our first tagged owl. It’s been a wild five years ever since, as this project has grown in ways we never could have expected. For instance, we had a research project but no budget, so Dave suggested we try crowd-funding. I was frankly skeptical, but many of you quickly proved that it’s possible to launch and maintain an ambitious scientific project with small donations from the general public and birding/ornithological organizations. (Our institutional home, the Ned Smith Center for Nature and Art in central Pennsylvania, has been a huge supporter from the start, not least because all donations to SNOWstorm are thus tax-deductible in the U.S.) 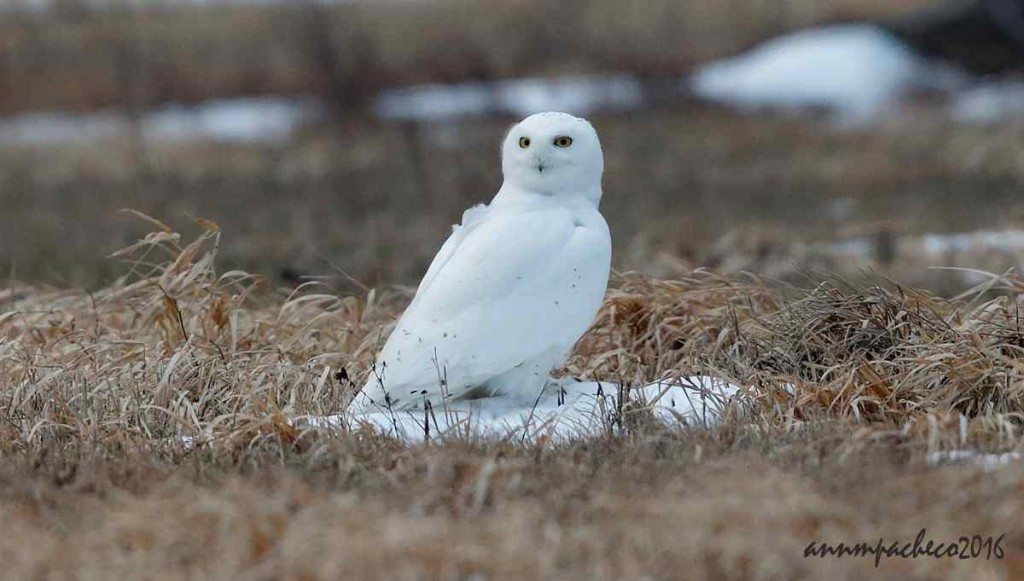 Chaumont, an adult male, uses some highly localized camouflage on Amherst Island in 2016, where we’re comparing movement data from owls before and after the construction of 27 wind turbines to assess their impact on snowy owls. (©Ann Pacheco)

That first winter, many of the core elements of Project SNOWstorm came together. Dr. Cindy Driscoll, Maryland’s state wildlife veterinarian, organized a major effort to salvage and necropsy dead snowies, and to work with banders to sample live birds we caught to explore their health and what toxins they’re encountering. A week or so after we launched our website in January 2014, a computer programmer and birder from Connecticut named Don Crockett contacted us; he’d developed an interactive mapping software that he thought we could use, and Don’s Tracker Maps quickly became central to our efforts, and an incredible outreach tool for the public. (Thus, it was both a professional loss as well as serious personal blow to lose Don so unexpectedly last year.) 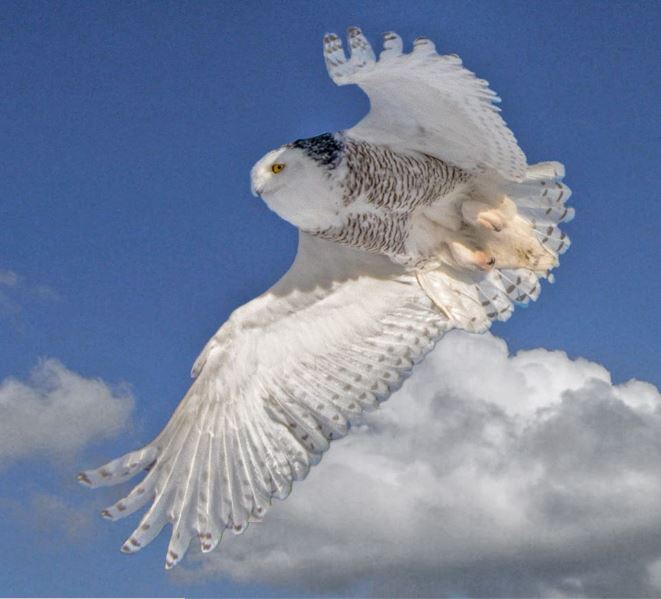 Five years has given us a window into the lives of wintering snowy owls, and plenty of fresh questions to pursue.  (©Patty Urlich Singer)

Today, Project SNOWstorm is still pushing into new areas. There are more than 45 of us now involved, most in an entirely volunteer capacity. We’ve tagged more than 70 owls in 15 states and provinces, creating arguably the largest dataset of snowy owl movements in existence. We have a Ph.D. student, Rebecca McCabe at McGill University, who is mining those data to examine a host of questions (and, in her spare time, looking into the microbiome of wintering snowy owls). Among other things, we’re using our tracking technology to examine how best to keep snowy owls and airplanes apart, and to look at how the erection of wind turbines may affect their movements in places like Amherst Island, ON, where they traditionally winter.

None of us had any idea how those phone calls five years ago would upend and reorder our lives. It’s been a blur, but in the best possible way. You’ve made it possible, and we hope you’ll stick around to see what we accomplish in the next five years — and beyond.

15 Comments on “Happy Birthday to Us”