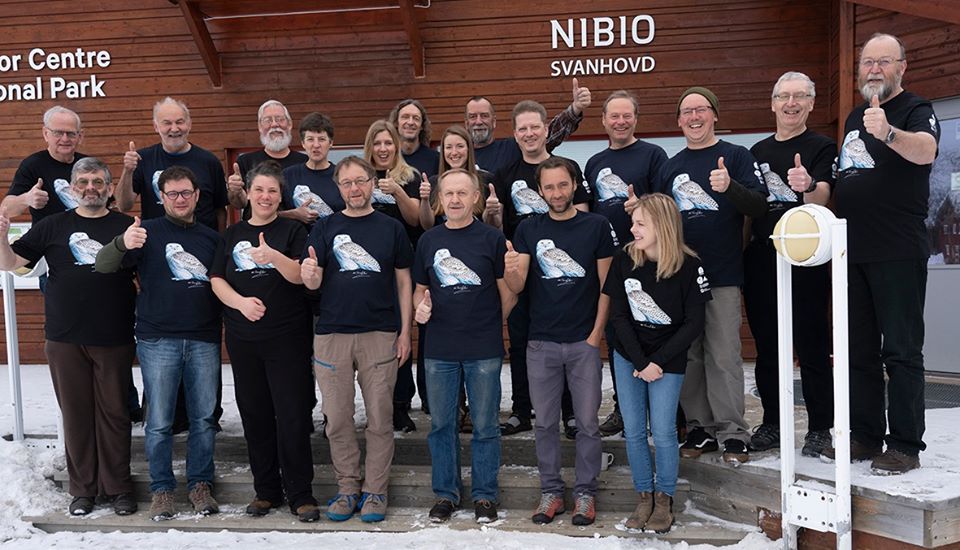 Participants at the fifth International Snowy Owl Working Group meeting, this past March in Norway. J.F. Therrien is second from the right, front row, and Dave Brinker is third from the left, second row.

(Earlier this year, SNOWstorm team members David Brinker and Jean-François [J.F.] Therrien joined snowy owl research colleagues from around the world for a periodic meeting of the International Snowy Owl Working Group — which, by the time it ended, proved to be a bit more nerve-wracking than they expected. Here’s their report.)

Back in the day when international travel was easy — which seems like eons ago, but was just in early March — the two of us (SNOWstorm collaborators Dave Brinker from Maryland and J.F. Therrien from Hawk Mountain in Pennsylvania) headed to Norway for the fifth International Snowy Owl Working Group (ISOWG) meeting.

Earlier ISOWG meetings were held in the Netherlands (2007), Canada (2010), Russia (2013), and Boston (2017). This time our Norwegian colleagues hosted the periodic gathering of world experts and other snowy owl aficionados, a five-day meeting to discuss the latest observations and conservation issues while making research plans for the future. Overall, researchers from Canada, Iceland, Denmark (Greenland), France, Germany, Norway, Russia, Sweden, and the U.S. gathered in this kingdom of fjords, Viking tales and other northern specialties, high above the Arctic Circle and just a few kilometers from the Finnish and Russian borders.

Turns out, getting there was the easy part.

Meeting in person (if anyone remembers what that’s like), even if it is only every three years or so, is always a great opportunity to bounce ideas off one another, float new possibilities and get reacquainted with old friends and colleagues. Although the threat of coronavirus had been growing in the weeks ahead of ISOWG, none of us at the meeting realized that this was probably going to be our last social gathering for quite a while. 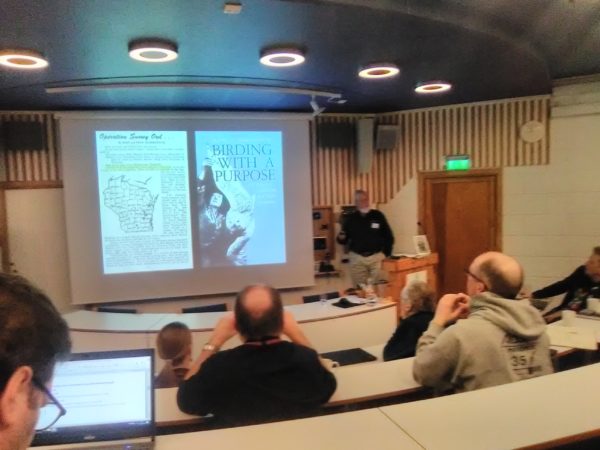 Dave Brinker gives an overview of snowy owl research in the U.S. during the ISOWG meeting. (©J.F. Therrien)

Indeed, getting there was relatively simple, flying from Newark and Dulles in the U.S. to Oslo, Norway, and then connecting to the Kirkenes airport, about 225 miles north of the Arctic Circle in the northernmost region of Scandinavia. A short drive took us through the taiga countryside to the meeting venue, the Norsk Institutt for Bioøkonomi (Norwegian Institute of Bioeconomy Research) near Svanvik, a small community in the Pasvik valley. It was the “getting home” part that took an interesting twist for all 21 of us when we heard, halfway through the conference, that borders (and countries) were starting to shut down, and that even airports were planning to close or reduce their activities to a bare minimum.

That came later, though, and the meeting was a real hit. Not surprisingly, sharing locally sourced meals, presenting talks, and going out on short birding field trips with fellow owl specialists, all staying at the same field station, spelled success. All attendees greatly appreciated SNOWstorm’s presence and presentations, including overviews of our huge tracking dataset, our veterinary team’s groundbreaking work, and previews of a number of analyses being conducted by SNOWstorm team members and graduate students.

There are several reasons to be hopeful and excited about ISOWG. Its strength lies in its collaborative spirit and to the fact that together we can accomplish a lot more than we can alone. For example, exciting results will soon come out of the genetic work being conducted by a grad student at Moncton University in New Brunswick, Marianne Gousy, who is collaborating with SNOWstorm and with colleagues in Canada and France. As part of her master’s thesis, Marianne aims to re-assess the current (and historical) effective population size of snowy owls using state-of-the-art molecular tools, reinforcing previous work led by our Norwegian colleagues, which placed the global population at just 6,000-16,000 breeding-age females. Genetic work won’t stop there, because the gathering in Norway included a very promising post-doctoral researcher, Dr. Helle Baalsrud, currently at the University of Oslo, who wants to sequence the entire snowy owl genome, in part using tissue samples collected and archived by the Project SNOWstorm veterinary team, potentially isolating the genes that make this species so unique. This project is still embryonic, but has great potential. 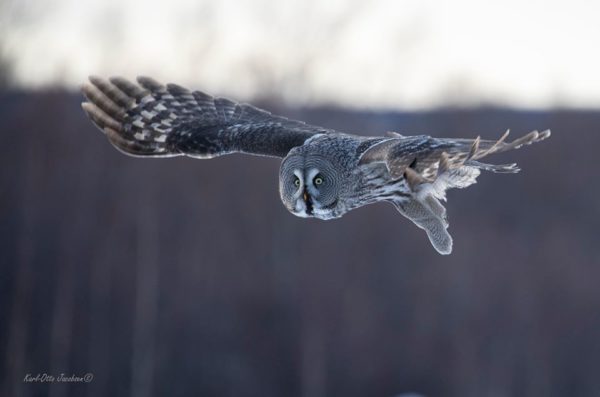 Not a snowy, but still a spell-binding owl — a great gray owl, seen during one of the ISOWG field trips in the Norwegian Arctic. (©Karl-Otto Jacobsen)

Also in attendance was Teja Curk, a former Hawk Mountain trainee from Slovenia who is now a Ph.D. student at the Max Planck Institute in Germany. For her doctoral work, she is looking at individual decision-making by several Arctic raptors including snowy owls during their northbound migration. A big part of Teja’s research is SNOWstorm’s amazing database of more than 250,000 tracking locations, gathered from 90 owls marked with GPS/GSM transmitters since we began in the winter of 2013-14.

Among the best things about a meeting like this is the opportunity to make connections and grasp insights you couldn’t working alone. For example, comparing snowy owl datasets from around the world — Project SNOWstorm’s, those from the Canadian prairies, the Canadian Arctic, Norway and elsewhere — several patterns are becoming evident.

For instance, it seems increasingly clear that while juvenile snowy owls wander widely from their birthplaces, once they establish a winter territory as an adult, they come back very regularly — if not to that exact spot, at least within a couple hundred kilometers of it. Snowies on the prairies in Saskatchewan don’t vary much at all in their wintering sites — their migration tracks are almost like a highway south from the Arctic and straight back north again. Our SNOWstorm birds in the East and Great Lakes seem to split around either side of Hudson Bay, while those that J.F. and Gilles Gauthier from Laval University in Québec tag in the eastern Canadian Arctic winter reliably on the Labrador/Newfoundland coastor in the Davis and Hudson straits, north of the treeline. Bringing global datasets together like this will unlock many remaining mysteries about snowy owl movements.

The Norwegians selected a perfect venue for the meeting, in this remote corner of Norway where one can look a short distance across the river into Russia. NIBIO serves as one of the gateways to the Pasvik-Inari Trilateral Park, a cooperative effort between nature protection agencies in Norway, Finland and Russia. The Svanhovd Hotel and education center was a comfortable location, and its menu included delicacies like Arctic char, grayling, Norwegian waffles, brown cheese and many other local items. Svanhovd includes a museum that interprets local wildlife and customs of the indigenous Sami culture, and how they relate to the sustainability mission of NIBIO, as well as a small, comfortable auditorium with the latest in meeting-related presentation technologies.

The location provided an opportunity for short field trips during which ISOWG participants were treated to birds such as great gray and northern hawk owls, Siberian tits, chaffinches and other local birds. We took a break midweek for a trip to a seabird colony of kittiwakes, murres, shags and puffins off of Vargo that was challenging to get to in the windy conditions.  Other Arctic specialties were king and Steller’s eider in the local harbor.  At one stop on the field trip a gyrfalcon and white-tailed eagle entertained us with a territorial dispute over a cliff that they were sharing as nesting eyries, and the closing meal was a cultural and culinary treat in a reconstructed Viking long house. The Norwegians set a standard that will be hard for future ISOWG gatherings to beat, and all of us at the fifth ISOWG meeting will be forever grateful for their wonderful and generous hospitality.

Ah, but then there was the getting-home part. As the meeting was ending, travel bans and restrictions were being imposed all over the world, including on flights back to the U.S. from Europe. Many flights were canceled. We both made it home, though through long lines and multiple delays. Everyone who took part was required to self-quarantine for 14 days, and fortunately, so far as we’re aware, none of the participants contracted COVID-19. It was all just in the nick of time — if the meeting had been planned for the following week, it would not have happened.

A New Season Amid Unusual Challenges
The Last Three

4 Comments on “ISOWG – All in This Together”