Last night eight of our tagged owls checked in. Despite being tired from five fruitless hours trying to catch a snowy owl here in Pennsylvania that we want to tag, I sat up for many hours more going through the latest movement data from our growing cohort of transmittered snowies.

The big news is that we added two more owls last week — “Kewaunee” in eastern Wisconsin, and “Sandy Neck” in Massachusetts.

SNOWstorm collaborator Gene Jacobs tagged Kewaunee, a heavily marked immature male, about four miles south of its namesake town on the Lake Michigan shore on Tuesday, Feb. 4. Since then the owl has stayed within a couple-of-miles area not far from the lake, in flat, rich farmland.

Sandy Neck, an immature female, was caught Feb. 5 by SNOWstorm collaborator Norman Smith of Mass Audubon at Logan Airport in Boston — and like the nearly 80 owls Norman has caught this winter at Logan, including our tagged female Duxbury, she was moved for her own safety. Norman released her 55 miles to the southeast, at Sandy Neck Beach near Barnstable, on Cape Cod.

She’s stayed pretty much there, at least through last evening. Interestingly, Duxbury (who had been moved to Duxbury Beach from Logan) has made some very big nocturnal movements around southeastern Massachusetts. Our interactive maps, which easily show the difference between daytime and nighttime locations, paint the picture very clearly.

Feb. 3-4, she made a big, looping trip south of Plymouth Harbor, spending the day on the roof of the Plymouth South Middle School before crossing the harbor back to Duxbury Beach. The night of Feb. 7-8, she left Duxbury again and made a smaller circuit inland of the harbor, coming to rest at the entrance to Jordan Hospital (now Beth Israel Deaconess Hospital), an area she’s used a couple times in the past as a daylight stopover. 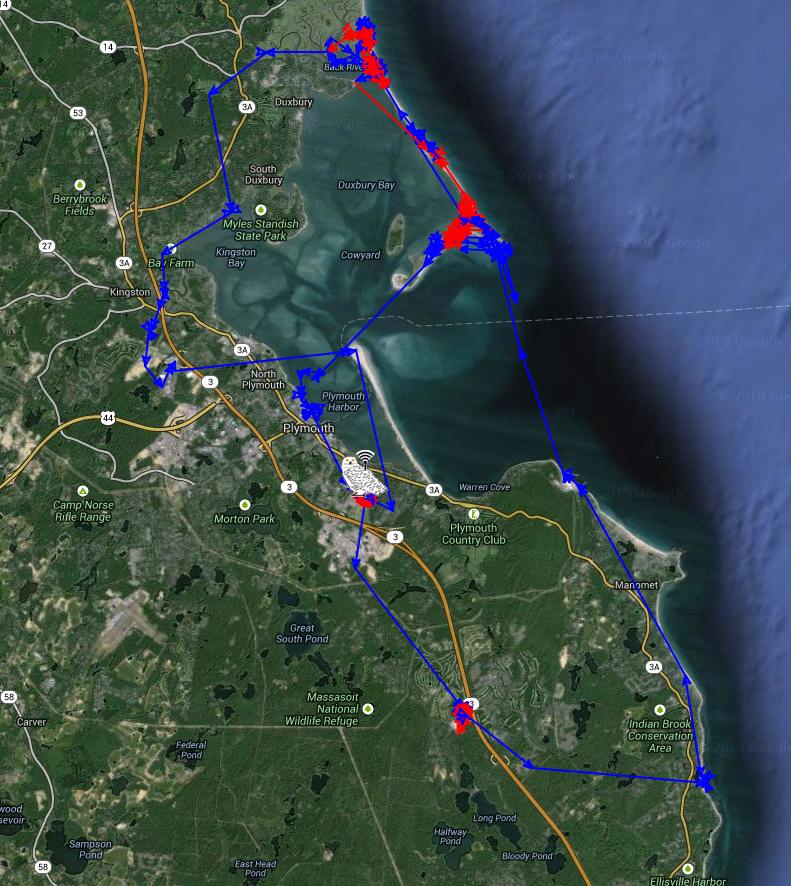 (My hat is off once again to Don Crockett and Drew Weber for these incredible maps, which have been the result of weeks of development and tinkering, and lots of your suggestions.)

The latest on the rest of the cohort:

—Freedom remains intensely wedded to a small area of farmland in Outagamie County. Aside from two exploratory flights that she took back in late January, she’s stayed within a 1.5-by-1-mile area of dairy farms since she was tagged. She really seems to be keying in on drainage ditches, which are presumably full of voles and other rodents.

–Since making a big swing to the east at the very end of January, Millcreek has been sticking tight — dangerously tight — to the Erie airport. He seems to have stopped commuting east to the intersection of I-79 and the railroad, which in itself made us nervous — an untagged snowy was killed on the interstate last week. During the day he hangs out at the northeastern corner of the airport, then often moves just off the airport to the area around a Lowe’s and Walmart.

—Ramsey is another homebody bird, staying within a very limited area in the so-called COR area of town. Like several of the Midwestern snowies, he seems to be much more active in daytime than the coastal (Great Lakes and Atlantic) birds.

—Braddock and Cranberry continue to be fascinating to watch, moving on and off Lake Ontario’s icy fringe, as we discussed a day or two ago. Cranberry spent a lot of time out on the ice the past three days, and at last report (at 7 p.m. EST yesterday) was more than five miles offshore. 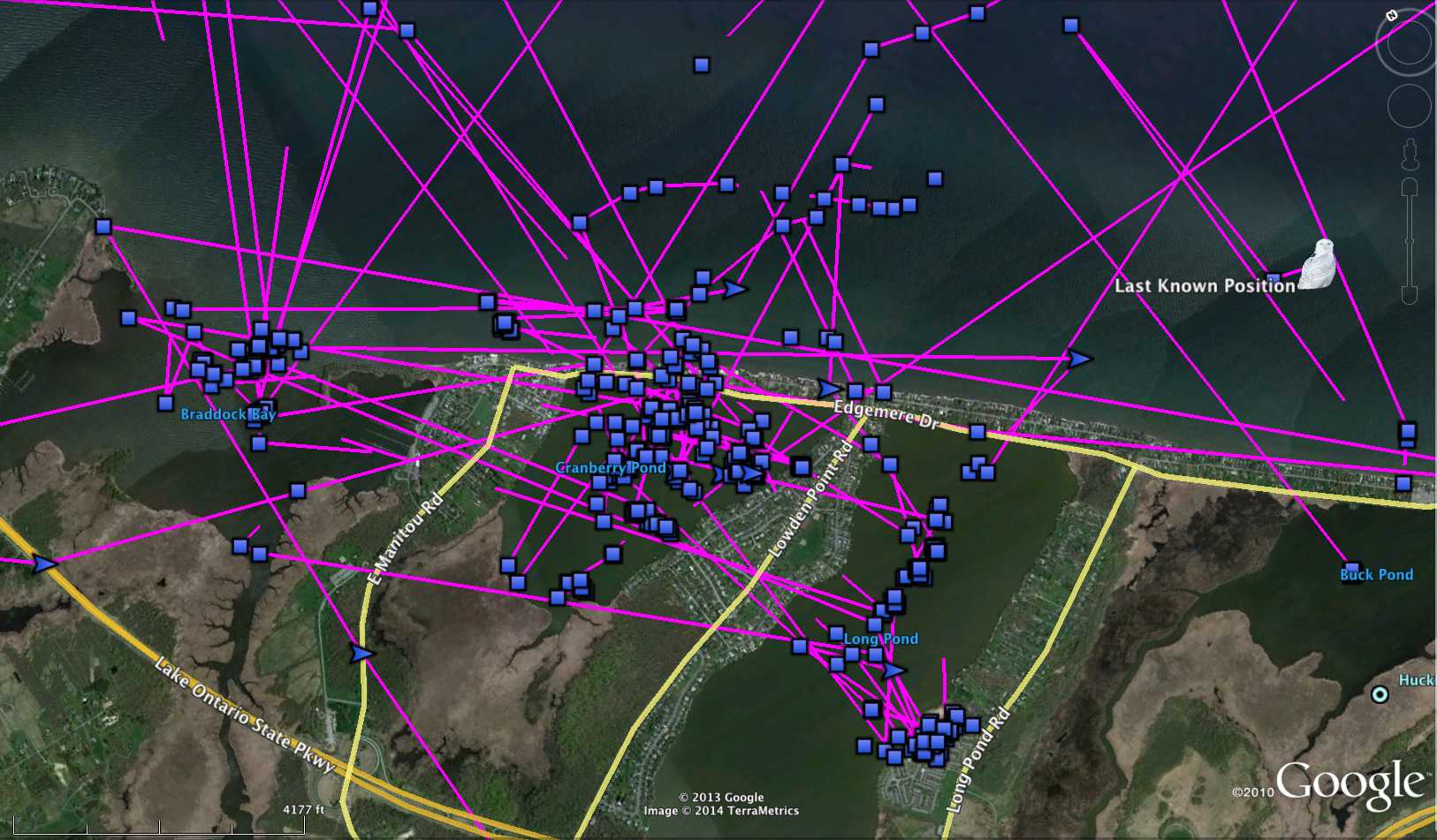 Braddock’s attachment to Cranberry Pond (as well as Braddock Bay and Long Pond) are evident from his tracks. (©Project SNOWstorm)

–Both Buena Vista and Assateague’s transmitters checked in but sent no data, possibly (at least in the case of Assateague) because of a server problem. Erie remains out of touch, but given his proven knack for going way out into Lake Erie, we expect we’ll hear from him eventually, when he comes back into cell range.

5 Comments on “The latest updates”