Every time we get an upload of data from Philly’s transmitter, which happens every third day, I hold my breath a little until I’m sure he’s still OK. As we’ve pointed out before, living in the middle of one of the nation’s busiest airports, and hunting beside the busiest interstate in the country, is an invitation for trouble.

We’ve also been concerned because recent photos of Philly on the taxiway suggest he’s preened his back feathers almost completely over the solar panel that powers the transmitter. While it’s been holding a charge very well on sunny days, would it continue to do so when we got heavy overcast and storms? 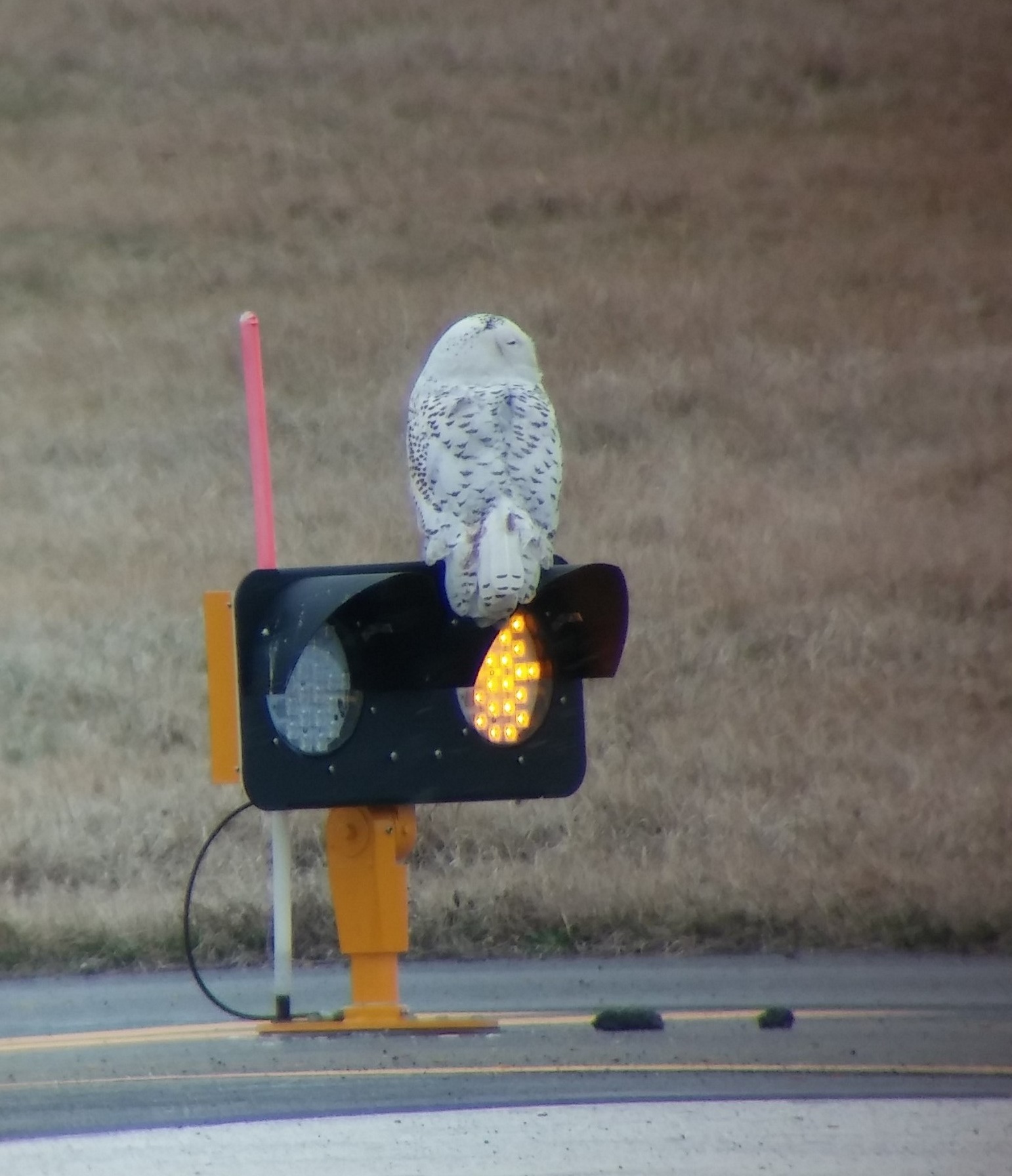 Last night, my colleagues Dave Brinker, Mike Lanzone and I were on a conference call, discussing a number of SNOWstorm issues — and also watching the clock tick down to 7 p.m., when we expected the transmitters to check in. Philly’s chimed in right on time, and we were delighted to see that, despite the big snowstorm just wrapping up, his transmitter was maintaining an excellent charge.

But then Mike noticed something that made our hearts sink. Each data dump includes 48 GPS fixes per day that we view on Google Earth — a series of little squares that represent stationary locations; little arrow waypoints if the owl was in flight; connecting paths tying them together; and a “Last Known Location” icon showing the final point recorded.

The last known location for Philly was smack in the middle of the four lanes of northbound I-95 — and it was stationary, not in flight. 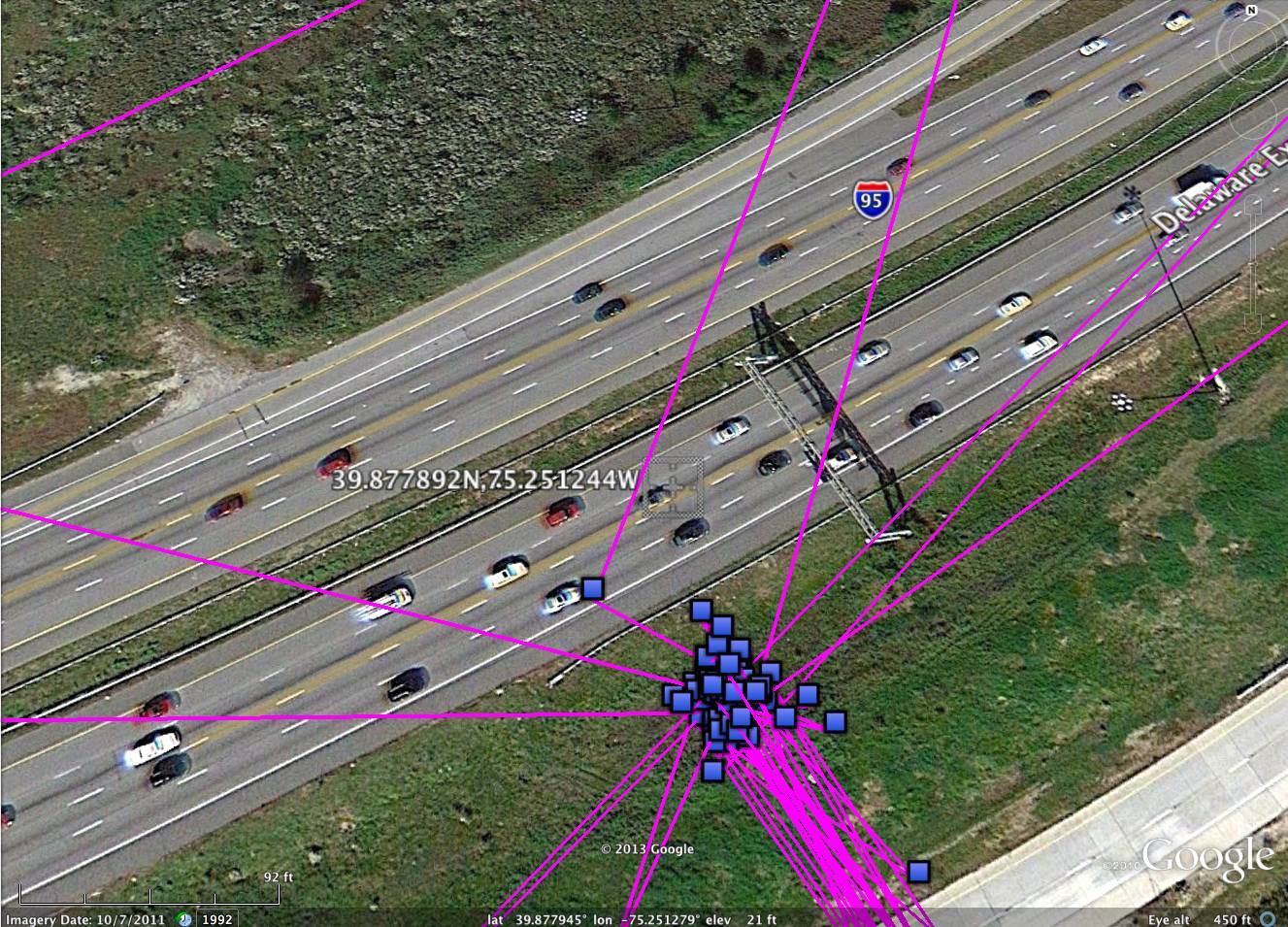 A sight to ruin a researcher’s day. (©Project SNOWstorm)

Our hearts sank; vehicular collisions are a major killer of snowy owls in winter, since they come down here utterly naive about cars, planes and everything else human. I plugged in the exact GPS coordinates just to make sure, and the screenshot above is what I got.

But when I connected to a live PennDOT traffic camera that, by coincidence, covers almost exactly that portion of I-95, I was relieved to see there was almost no traffic on the snow-covered expressway. Maybe he simply flew down to the deserted road for a moment, just as the transmitter took a GPS fix. After all, the unit was working fine 26 minutes later when it sent off its data for the previous three days.

I quickly called Jenny Martin, the USDA wildlife technician who worked with us to trap Philly, and who has been keeping a close eye on him ever since. Ironically, she’d driven past that spot at almost exactly the same time as Philly’s GPS fix.

“The highway was deserted,” she said. “I could have stopped in the middle of the road and cleaned off my windshield, and it wouldn’t have been a problem.”

Still, she was as worried as we were. With the storm just abating and the roads still a mess, there was no point (and a lot of risk) in going out immediately to search the highway then, but she promised to head to the airport at first light.

Her text at 7:30 this morning was ebullient. “Found him! Hanging in his usual spot!” Philly was at the east end of the airport taxiways, more alert than usual, watching all the snowplows and other vehicles with great interest and a lot of head-bobbing, she said.

So we’re all breathing a big sigh of relief. These owls become more than just study subjects, which is emotionally risky — they are, by and large, young and inexperienced birds, and the dangers that confront them down here, from cars and planes to utility wires and rodenticides, can seem overwhelming. A lot of them won’t make it.

But for now, Philly’s dodged another bullet, and we couldn’t be happier.

(That’s not the only good news — we have two more owls with transmitters, and we’ll share that exciting story very soon.)