As longtime followers of Project SNOWstorm are aware, there are few people with more field experience with snowy owls than Tom McDonald of Rochester, NY, who is in his fourth decade of snowy research. Last year we were privileged to present Tom with our first lifetime achievement award for his remarkable body of work. Here are Tom’s thoughts on a recent interesting observation.

Snowy owls never cease to amaze me. After 34 years of research, logging more than 700,000 miles on the road, thousands of hours of empirical observation and handling 687 of these iconic owls, I find myself as excited and in awe as I was with the first one I ever captured.

What’s equally amazing is that, just when I start to get smug and think I know a little bit about them, the next one I try to capture can make me look like a rank amateur and take me back to square one.

I’ve observed snowies talon-grappling 75 feet in the air over busy 5 o’clock traffic on a main thoroughfare; knocking a full grown Canada goose out of the air like a prize fighter; falling asleep on a small shed late at night, after capturing and devouring eight meadow voles, (observed through the lens of a night-vision scope); fluttering like butterflies while traveling from one perch to another; taking a full-sized ring-billed gull off the water and carrying it 200 yards to a secluded spot on the beach; hover-hunting like an American kestrel in the wind; and a myriad of other equally astounding behaviors that boggle the mind.

I’ve also been blessed with having a great working relationship with hundreds of birders and land owners who have been eager to share their snowy owl observations with me. Recently, a well-respected local birder and waterfowl expert here in upstate New York, Bob Spahn, shared this observation:

Bob was conducting a Christmas Bird Count along the south shore of Lake Ontario, just west of Rochester. He was using a tripod mounted 60x lens and scanning for waterfowl activity three-quarters of a mile offshore. After a short while, he spotted  two snowy owls working independently of each other and flying east and west, back and forth while paralleling the lake’s shoreline. They were repeatedly working their way up to about three or four hundred feet in the air, then stooping down toward the water like peregrine falcons in an attempt to snatch waterfowl and gulls in midair or off the water. I’ve personally seen snowies doing the same, but much closer to the mainland. It was nice to see others observe and share the same.

Snowy owls are nothing if not adaptable. Unlike many other owls, snowies are built for speed, rather than stealth. Their plumage is stiffer and their wing configuration is more suited for high-speed applications. 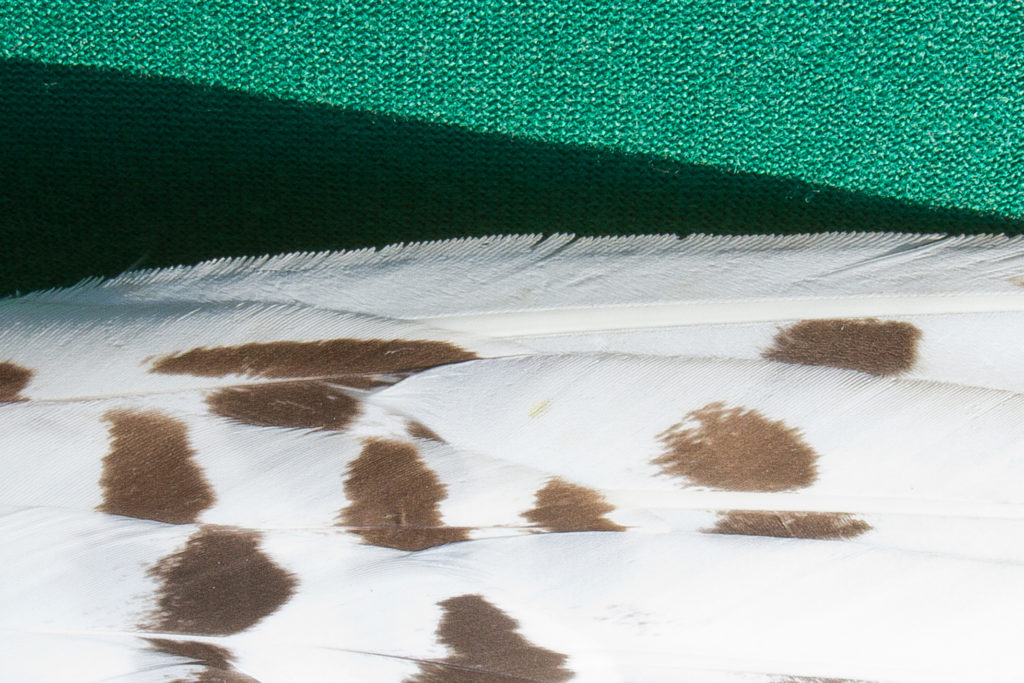 This is a photo of the leading edge of a snowy owl’s wing. The outer edge of the primary feather looks a lot like a hacksaw blade and cuts through the air like a knife, thus allowing the air to flow smoothly and swiftly over the top of the wing. 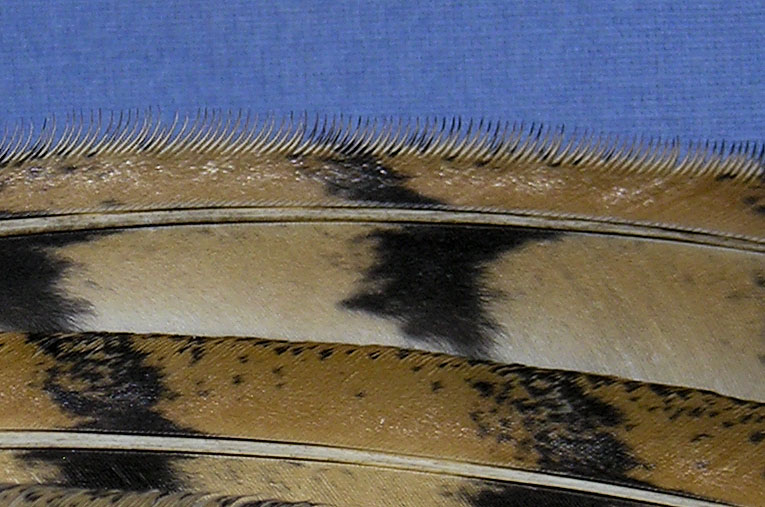 The second photo (above) shows the leading edge of a barn owl’s wing. Notice the long and curved serrated edge, appearing to be much like a comb. This helps to slow and divert the airflow over the top of the wing and the owl’s soft plumage and, with the fluffy trailing edge on the wing, helps to muffle the sound of the air and adds stealth to their arsenal.

Here are a few  images taken from one of the piers in Rochester by Aaron Winters, a well-respected local photographer and good friend. 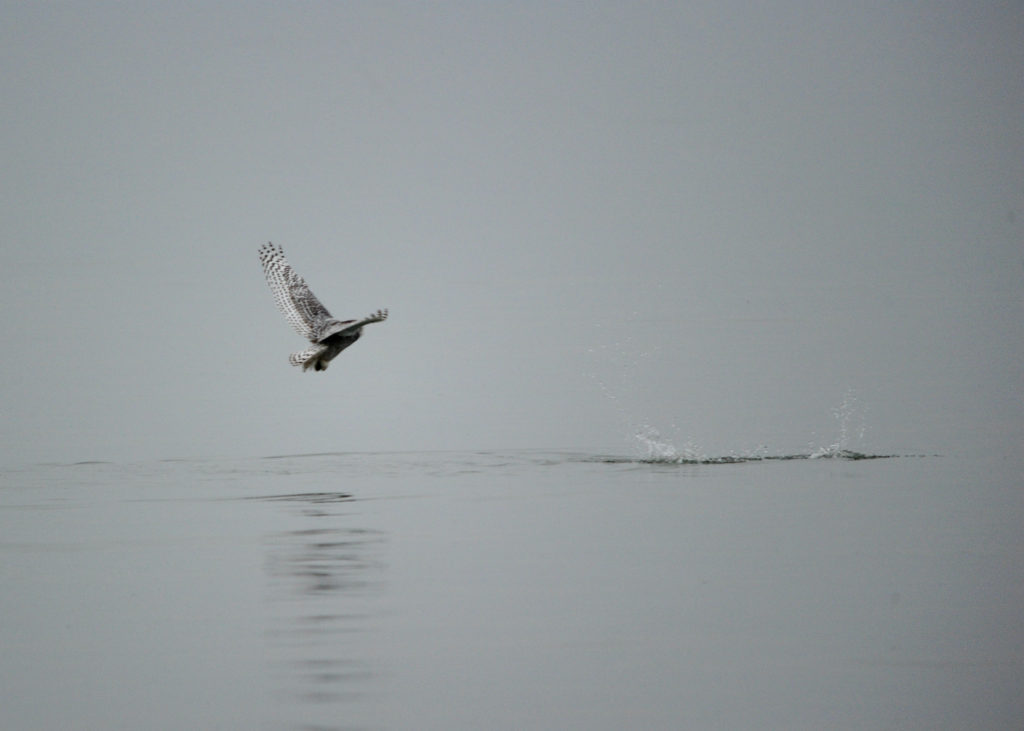 This photo shows a snowy making an attempt to snatch an understandably unwilling merganser off the water. The second (below) shows the owl’s determination to finish the job. 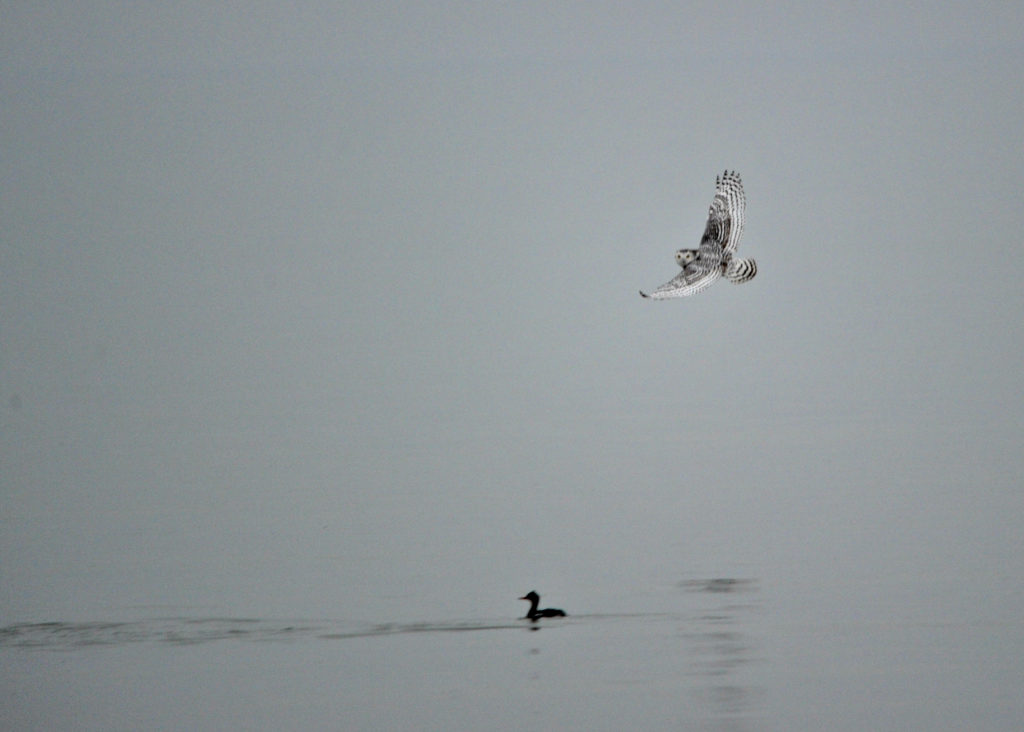 And this third photo (below) shows the fairly steep learning curve a young snowy owl like this one faces, in trying to distinguish real ducks from decoys. Years ago, I watched one picking a hunter’s decoy out of the water — only to have the anchor line pull it from the owl’s grasp. 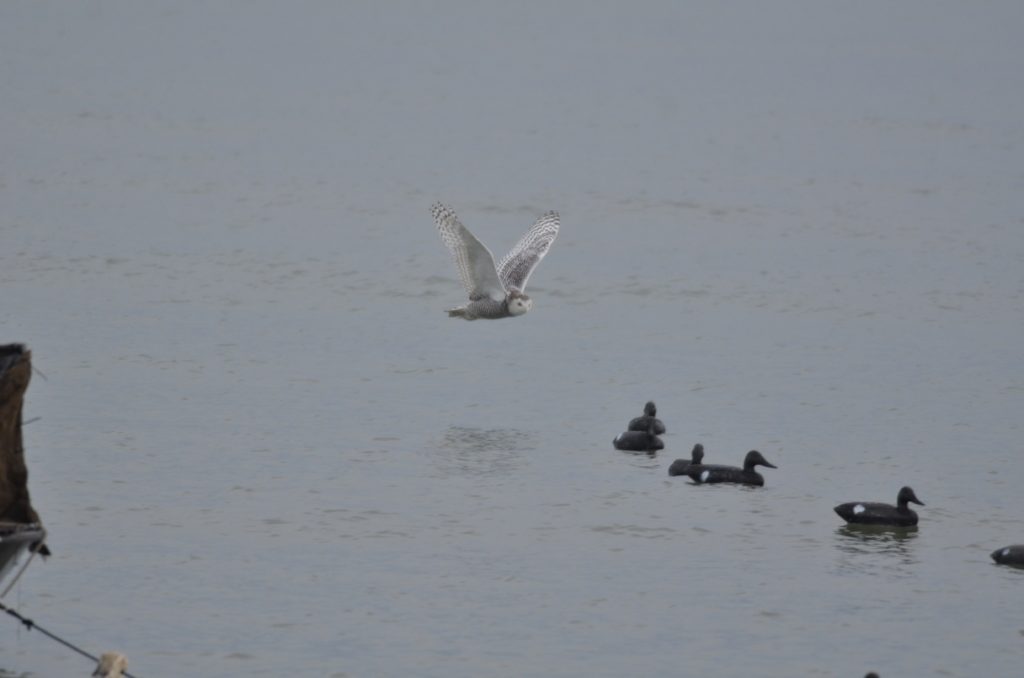 The Friday Funnies
Here, or There?