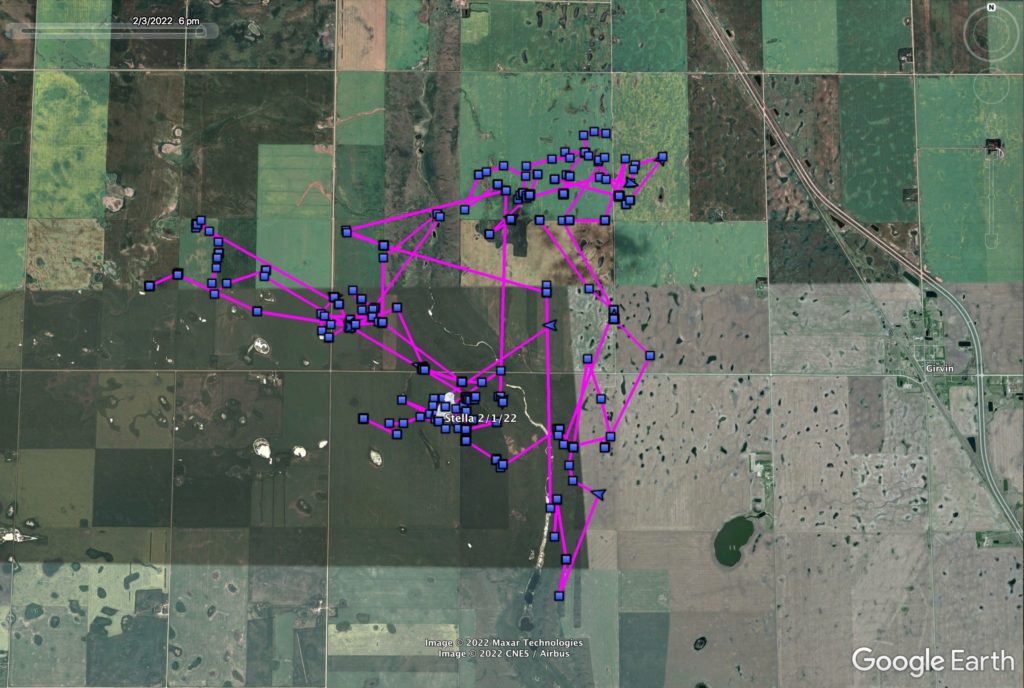 Stella’s recent, highly local movements in southern Saskatchewan may seem the norm for her — except when they’re not. (©Project SNOWstorm and Google Earth)

To stay, or go: That is the question.

Stella, one of our transmittered alumni, was originally tagged four years ago, in January 2018 on Amherst Island on the northeastern edge of Lake Ontario. She was a juvenile then, having hatched the previous summer. When she migrated north that spring, she swung wide to the west, up the western shore of Hudson Bay and into the central Canadian Arctic, and she’s remained a Western owl ever since, eschewing the Great Lakes for the Great Plains every winter.

But east or west, she always seemed to be a homebody, remaining in a very small winter territory. On Amherst that first winter, she used just a 6 sq. km (2.3 sq. mil) area of shoreline and lake ice over the course of four months. In 2018-19 she occupied a slightly larger area (6.7 sq. mil/17 sq. km) in northeastern Montana. The following winter it was a roughly comparable territory along Whitewater Lake, just west of Boissevain, Manitoba. 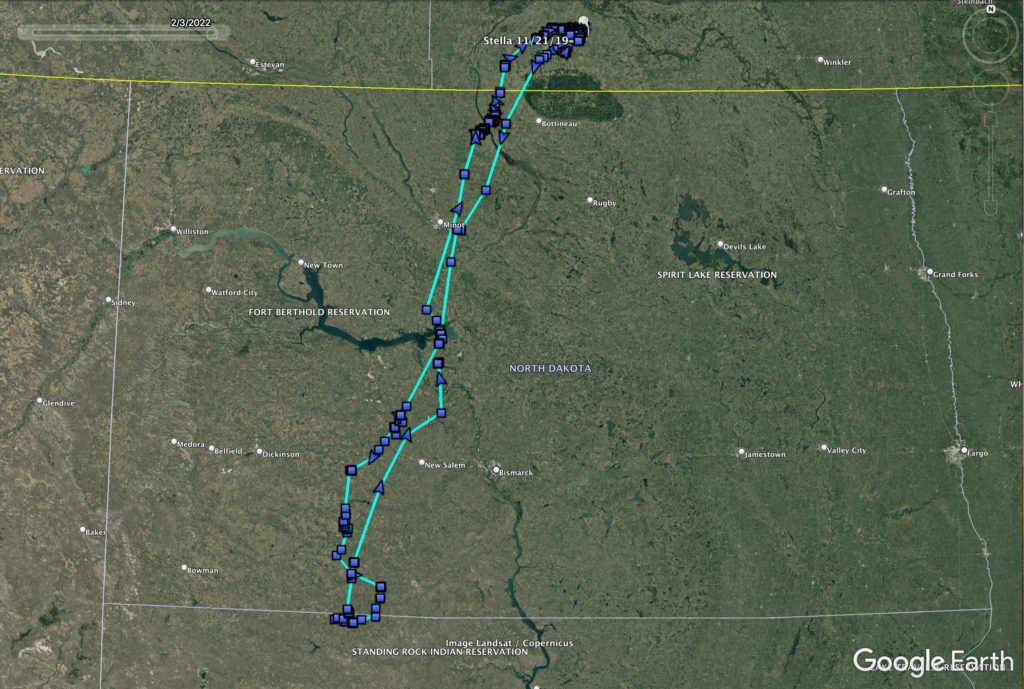 In November 2019, Stella made an abortive, two-week flight south across North Dakota before returning to her Whitewater Lake territory in Manitoba. (©Project SNOWstorm and Google Earth)

Okay, so she’s a stay-at-home, right? Not exactly. Before she settled that winter, Stella left Whitewater Lake and made a two-week, 570-mile (917-km) flight south across North Dakota, dipping a talon into South Dakota before immediately reversing course back to where she started. 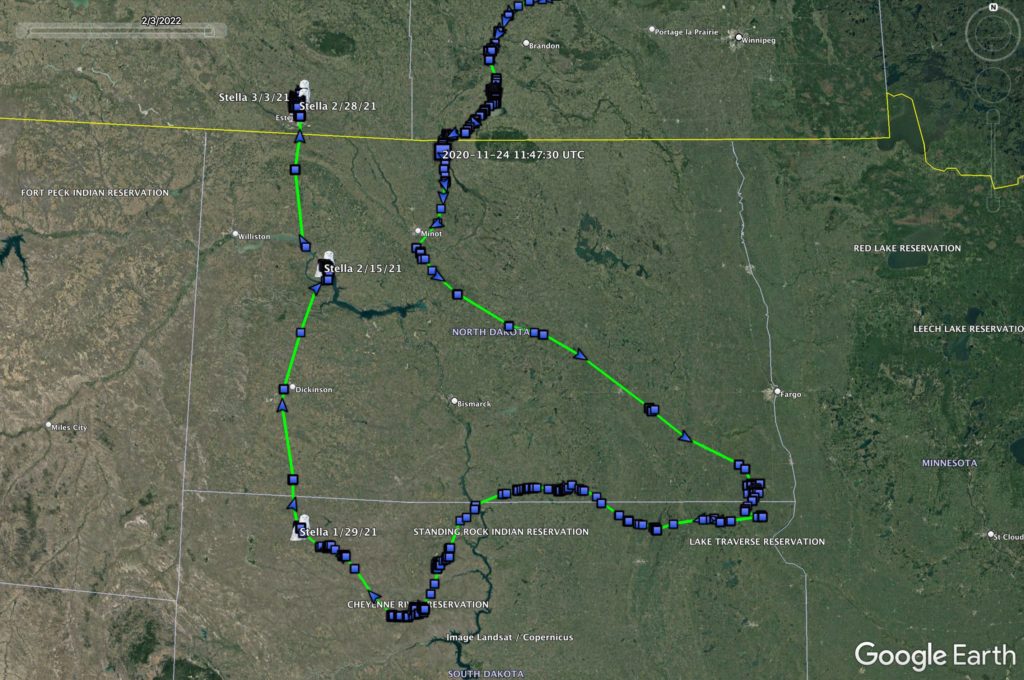 And last winter, she never stopped moving, traveling a thousand miles across the Dakotas. (©Project SNOWstorm and Google Earth)

This winter, however, she seems to be back to her sedentary ways. Since late November she’s been plunked down in another small activity area covering 11.5 sq. km (4.5 sq. miles) in southern Saskatchewan. What gives? The fact is that while we can’t say with certainty, we can make some guesses.

Our tracking data, and those of our colleagues in western Canada and elsewhere, are painting an increasingly coherent picture of how snowy owl migratory behavior changes with age. It seems as though young owls in their first few years may wander very widely between wintering regions — like Stella, starting out in the East but winding up in subsequent years in the prairies. Once they reach maturity, though, from age three or so onward, they are much more likely to settle into a routine.

In some cases, that routine includes a very specific wintering spot — think of Wells, who has been wedded to the same section of Québec City for five years, or our old friend Baltimore, who was so reliable on his territory in the Ottawa River valley of Ontario that we were able to find him there for several years after his transmitter died, and eventually retrap him to remove the dead unit.

Stella hasn’t shown that degree of site fidelity, but she does seem to like to find a place and root herself there for the winter. We suspect that her atypical wandering behavior last year may have had something to do with prey density in the northern Plains; it’s possible she just never found a spot with enough easy pickings to keep her well-fed and content. Populations of small mammals like voles tend to be cyclical, and it may have been an off-year in the Dakotas. Or maybe snowy owls just get the itch sometimes — the mystery of what causes such dramatic behavioral changes is part of the excitement of doing this work.

(It’s worth noting, incidentally, that this fidelity to a wintering site or region does not seem to hold for the summer nesting season. Snowy owls, including many of those we’ve tracked, can move huge distances from one summer to the next — nesting one year in, say, northern Québec and the next 2,000 km [1,250 miles] to the northwest in the far Arctic archipelago of central Canada. That is thought to reflect a prospecting behavior, looking for areas where prey populations, especially lemmings, are near their cyclical high. Because a lemming bust usually follows a boom year, going back to where you nested successfully last season might a bad decision. Better to look for fresh pastures.)

Elsewhere, the first of the month came and went without new data from some of the owls who had initially connected back in early winter: Columbia, Amherst and Alderbrooke.

Columbia came south in late November and uploaded 10,500 GPS points from her location near Crookston, Minnesota, but went dark thereafter. Ditto with Amherst, who on Dec. 14 was 200 km (120 miles) south of James Bay, and Alderbrooke, who checked in Nov. 18 last year from Lac St.-Jean in southern Québec, and uploaded some 9,000 GPS points. The latter two birds have briefly connected on the first of the month since then, but sent no data and just repeated their previous coordinates, a sign that their transmitters didn’t have enough voltage to transmit GPS points.

Columbia did send additional data through the end of December, but she’s been completely AWOL since then, without even a first-of-the-month security check like Alderbrooke and Amherst. Most likely, she’s either in a dead zone for cell service (that happened to Stella in 2018-19, when she was completely off the grid almost all winter) or her solar recharge hasn’t been keeping up. We’ll be happy to see her back in touch, but we’re not too concerned yet. 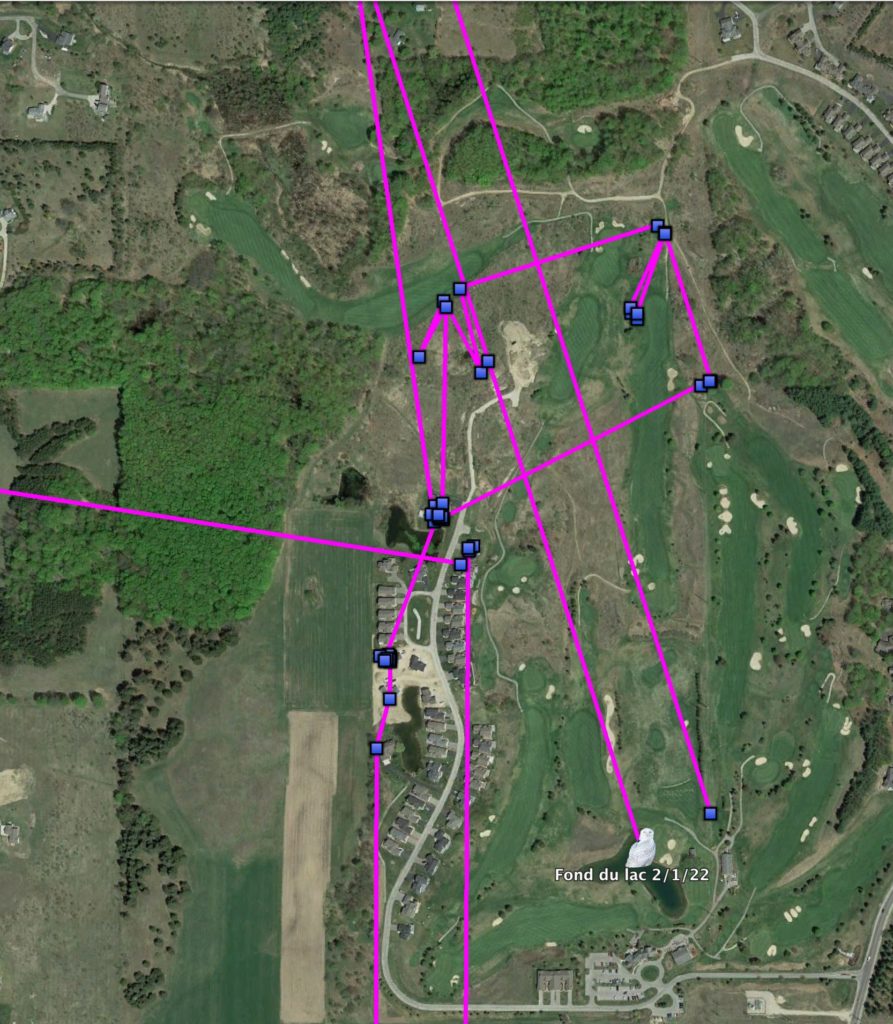 Of the owls in regular contact, Fond du Lac was hitting the links this week, hunting the Crown Golf Club south of Traverse City, Michigan. Otter is still moving around the large island of farmland amidst the sea of boreal forest east of Lake Abitibi in western Quebec — a more wooded region than we normally see our tagged snowies using. 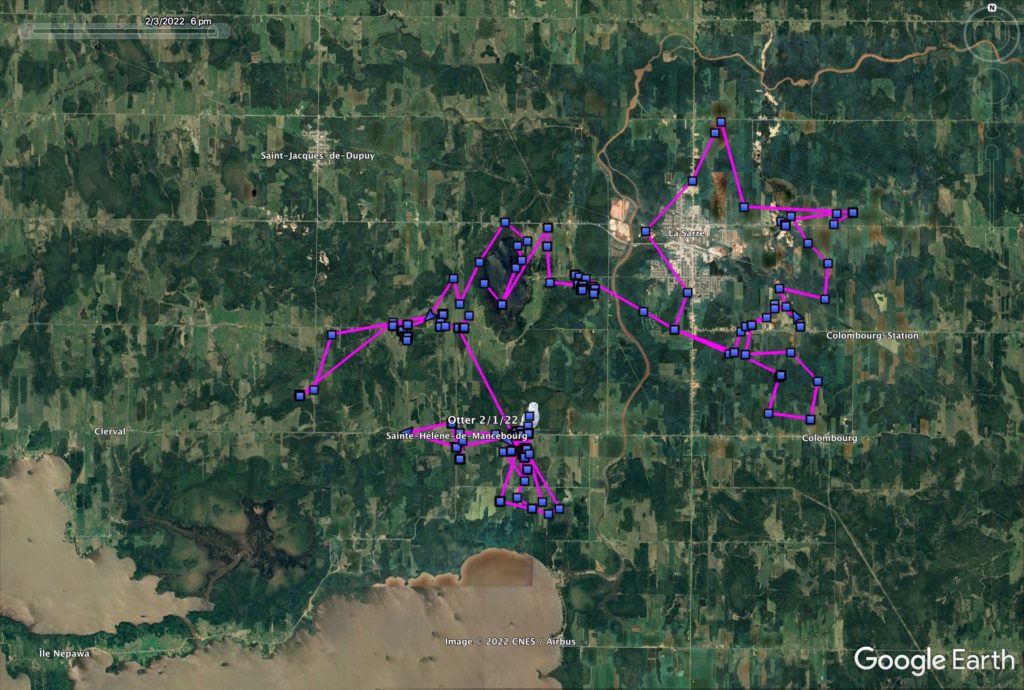 Otter has been on a slow-motion walkabout in western Québec. (©Project SNOWstorm and Google Earth) 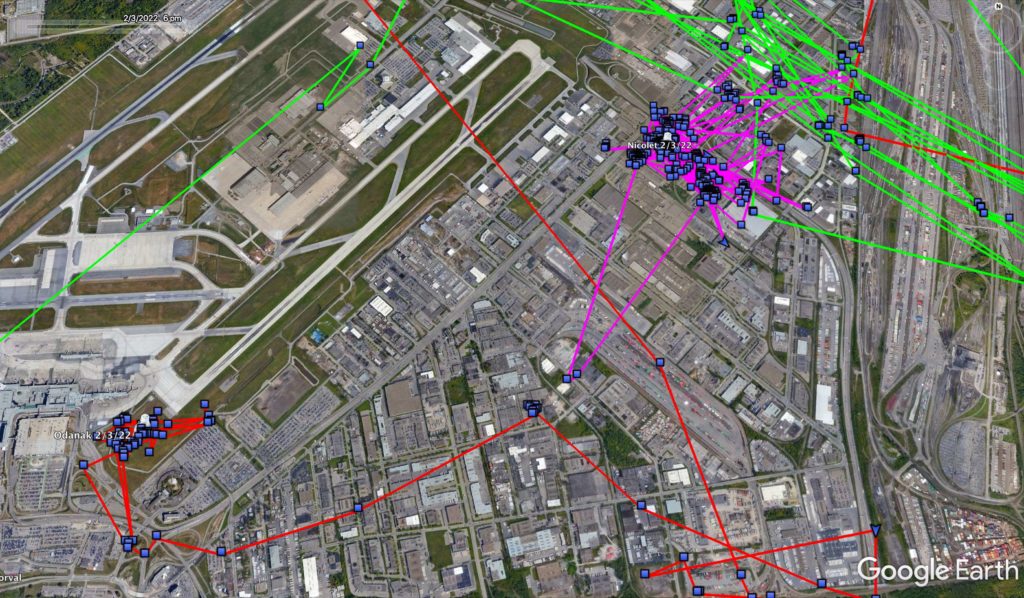 Odanak (red) has returned to the Montréal airport, while Nicolet (purple) hunts a freeway cloverleaf. (The green are tracks from Hochelaga.) (©Project SNOWstorm and Google Earth)

Over near Montréal, our cluster of returnee and newly tagged snowies has been showing an interesting mix of movements.

Yul, who was tagged in late 2019 at the Montréal airport and returned south in early January this year, seems content in the farmland of the St. Lawrence south shore, 25 km (15 miles) west of Drummondville, QC, close to where she wintered last year. On the other hand, the island of Montréal has been magnet for our other three snowies. Odanak finally quit the small airport of Saint-Hubert Longueuil on the south shore and at the end of January flew west across the river to Montréal Trudeau International, where she was first caught and tagged — though so far she’s remained away from the main runways. 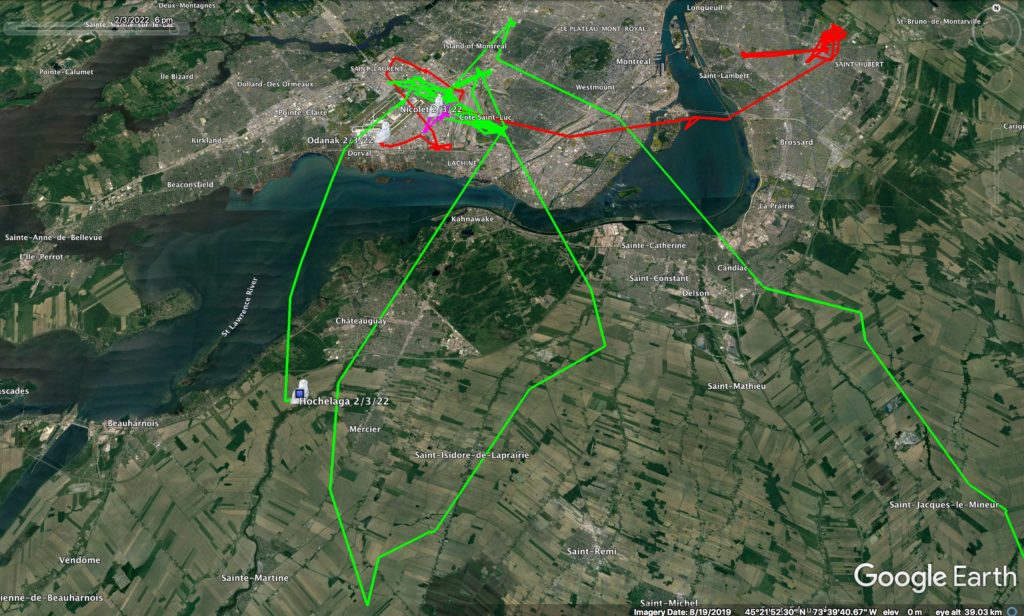 Make up your mind: Hochelaga bounces back and forth across the St. Lawrence. (©Project SNOWstorm and Google Earth)

Nicolet remains just outside the airfield grounds, spending almost all of her time hunting some large grassy freeway margins in an industrial neighborhood, while Hochelaga has ping-ponged back and forth from one side of the St. Lawrence to the other.  As of Feb. 3, he was near Châteauguay, QC, on the south shore about 14 km (9 miles) from the airport, but it’s anyone’s guess if he’ll stay there.

And what about Wells? Reliable as ever, this old girl remains on her longtime winter territory in Québec City, keeping out of trouble.

Owl, or Falcon?
A D.C. Celebrity