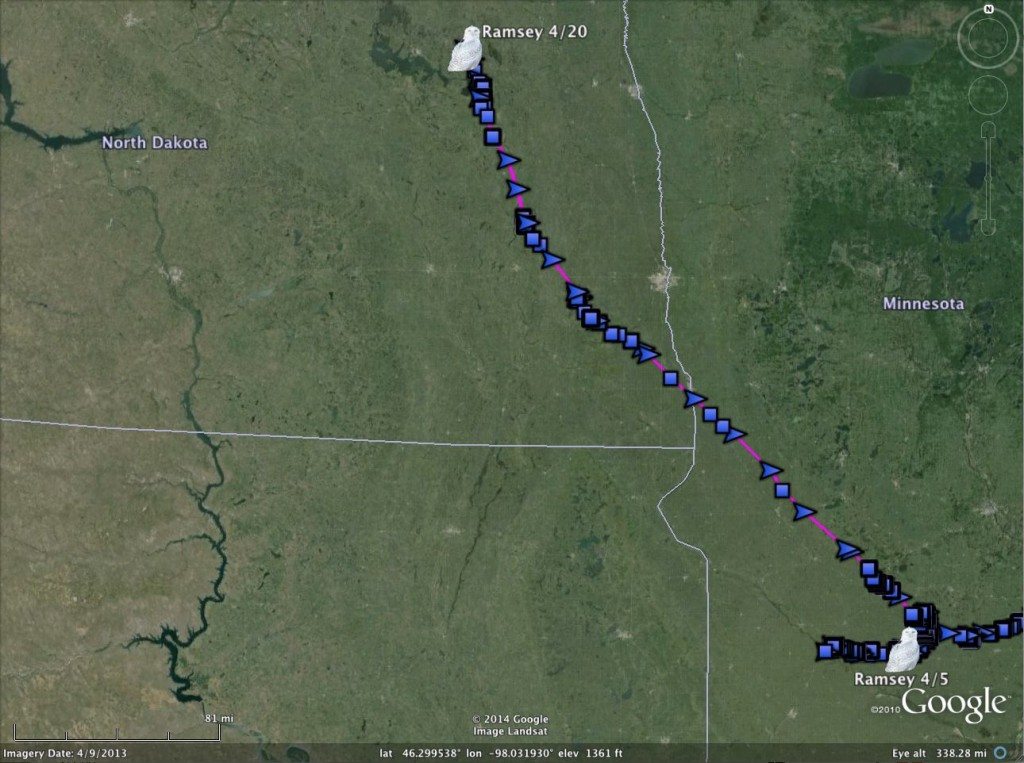 Ramsey’s movements from April 12-20 — zeroing in on Ramsey County, ND, of all places. (©Project SNOWstorm and Google Earth)

Shakespeare said a rose by any name would smell as sweet, but what about an owl by any name?

We nicknamed our tagged owls for locations and geographic features — a better means keeping them straight than easily confused band numbers, without needlessly anthropomorphizing them with human names. And we weren’t always especially creative — which is why the male owl banded in Ramsey, Minnesota became, well, Ramsey.

If you’ve been reading this blog all winter, you’ll recall that Ramsey was the most localized snowy owl we had, scarcely moving half a mile all winter from where he was tagged. But since he started migrating a month ago, he’s put some miles under his wings — first south and west, and now northwest.

He’s been AWOL for weeks at a time, hunting prairie country in southwest Minnesota with poor cell reception. He dropped off the radar again after April 5, and didn’t resurface until Sunday night, having made a nearly 300-mile (480 km) flight up into northeastern North Dakota.

What caught my eye — and stirred my memory — was seeing his location just east of Devil’s Lake. That’s the heart of prairie pothole country, the fabulously rich breeding ground for waterfowl and shorebirds, a maze of millions of small lakes and marshes, and I’d spent several glorious summer weeks in the late 1990s exploring that part of the pothole region.

What I hadn’t noticed was exactly where Ramsey was, until Steve Huy emailed me.

“Did you notice Ramsey is headed straight for Ramsey, ND?” he asked.

Actually, as Steve and I soon realized, he was already there — shortly before dawn on Sunday he’d crossed the line from Nelson County to Ramsey County.

What are the odds? Pretty steep. There appear to be just eight towns or counties in the country named Ramsey…and he’s found one of them.

Kidding aside, Ramsey is following a decent track for maintaining cell reception as long as possible. Not that there are a lot of towers in North Dakota — there aren’t. But Manitoba just to the north has better coverage than western Ontario, and Saskatchewan to the west of it has even more towers.

Three other owls checked in Sunday night. Oswegatchie seems perfectly content in his new favorite spot in southeastern Ontario, midway between Ottawa and the St. Lawrence, where he’s been since April 10, hunting fields and a railroad bed.

Amishtown continued the rest of the way up Georgian Bay, a 92-mile (148 km) flight that paralleled the track that Braddock took in mid-March before that owl retreated all the way back to Lake Ontario. But Amishtown pushed on right to the northern edge of the bay, and was just offshore of the town of Killarney, Ontario, near Manitoulin Island.

Finally, Kewaunee did a north-and-back flight between April 11 and 20 that covered almost 300 miles (480 km), from Green Bay on Lake Michigan, way up into the Upper Peninsula in Dickinson, Marquette and Iron counties, and then back to Green Bay again.

He may have felt a little uncomfortable on the UP — that area is heavily wooded, although he was hanging out in open bogs and some timbered areas. Most interestingly, for a few hours the night of April 14-15 he was on the frozen surface of the historic Republic Mine, a huge (and now flooded) open-pit iron mine. 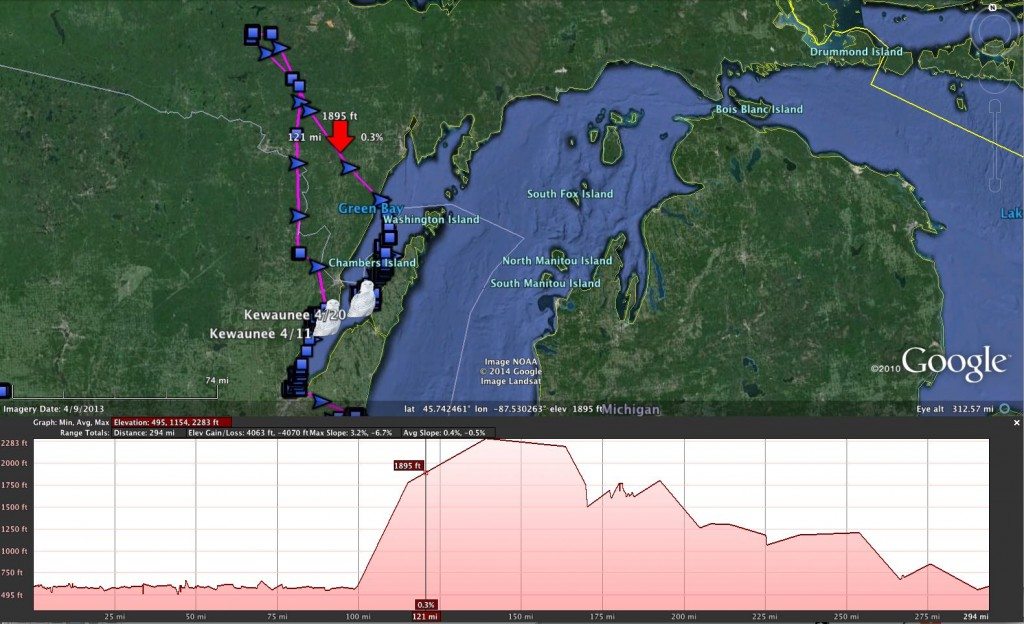 There and back again — Kewaunee’s sojourn in the UP of Michigan, and his very determined flight back to Green Bay a couple days later. The timeline of the elevational profile runs from right to left — the low-elevation movements are after he returned to Lake Michigan. (©Project SNOWstorm and Google Earth)

But he didn’t linger. After about two and a half days on the UP he lit off back south to Green Bay. I was especially struck by the elevation profile for his flight — he quickly climbed to more than a thousand feet (300m) above the ground, and was pushing along at more than 40 knots (46 mph/64 kph) until he made it back to the lake, at which point he dropped like a stone to the ice.

From there he loafed south almost to where he’d started. We’ve seen this behavior before with several owls — it’s as if they want to go north, but chicken out when they hit inhospitable terrain like lots of dense forest. Not until the migratory urge becomes overwhelming, perhaps, are they willing to face that seemingly endless expanse of alien trees through which they have to pass to return to the Arctic.

But that day is coming soon, and the diminishing number of owls checking in every three days suggests a number of them may already have passed that threshold, and moved into country beyond the cell tower — and contact with us, at least until next winter.

9 Comments on “From Ramsey, to Ramsey, by Ramsey”