The last transmission cycle seems to have been a quiet one; four owls checked in, and they pretty much stuck to where they’d been the last time they sent in data.

Millcreek hadn’t checked in for more than a week, but he was just off the Buffalo waterfront, stubbornly clinging to what’s left of the ice of Lake Erie, which now occupies only a small portion of the easternmost toe of the lake. 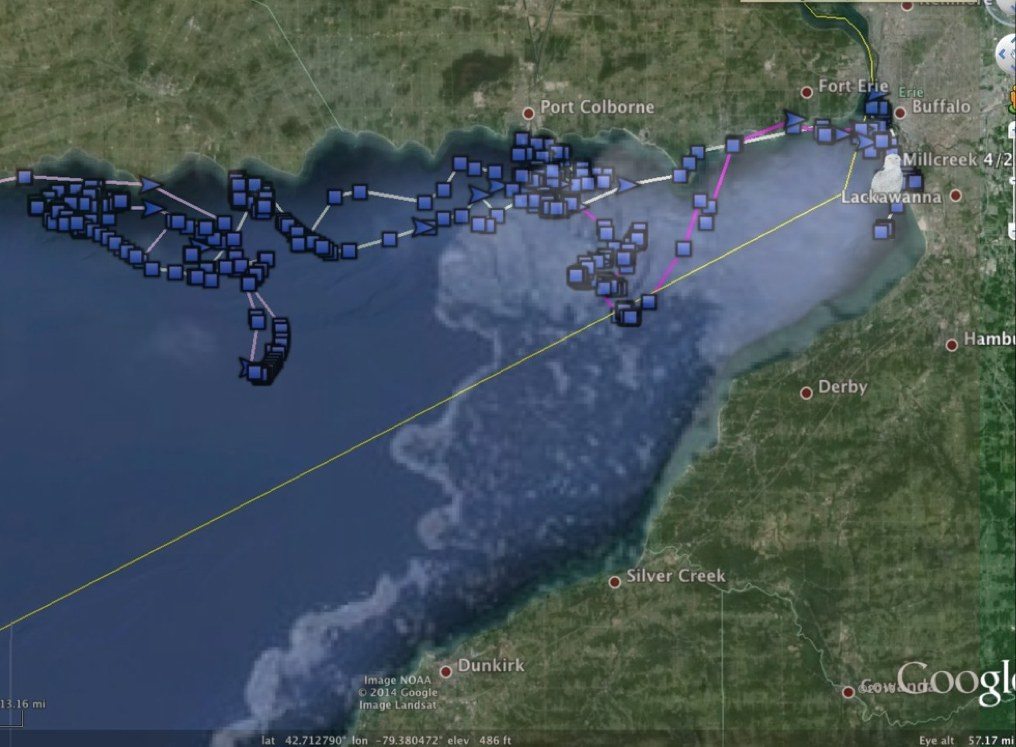 As you can see from this overlay of the MODIS ice imagery from April 24, there’s not much left, but April 20-21 Millcreek was out near the ice edge — as always, a good place to hunt. But by the 23rd he was back to Buffalo Harbor, a place he’d visited at the beginning of April, within shouting distance of the Peace Bridge over the Niagara River.

Oswegatchie really, really likes his little patch of farmland near the small town of Casselman, Ontario, where he’s been since April 10. Here’s what the area looks like in Google Street View (in summer, obviously); the appeal for a snowy owl is obvious: 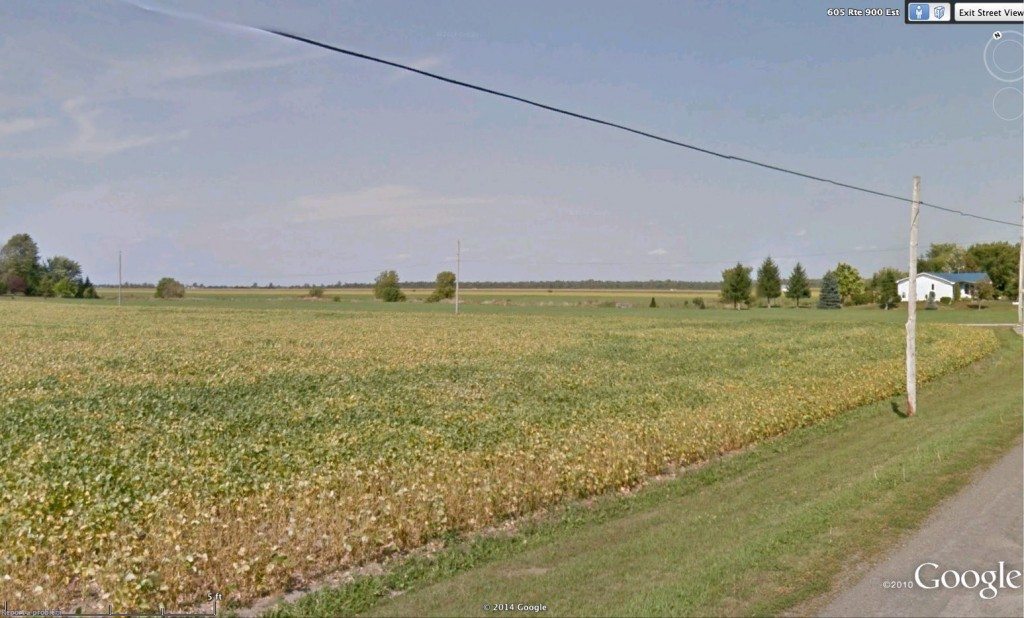 The view in summer a few kilometers from where Oswegatchie has been hanging out. (©Google Earth)

What’s less obvious is that the fact that it’s pretty isolated. The nearest road in most directions is anywhere from two to five miles (3-8 km), and while there is one paved road within .6 mile (1km) from his haunts, it dead-ends at a farm. My only worry is that he’s hunting along an active railroad track, but the traffic is obviously going to be a whole lot less frequent than a highway. 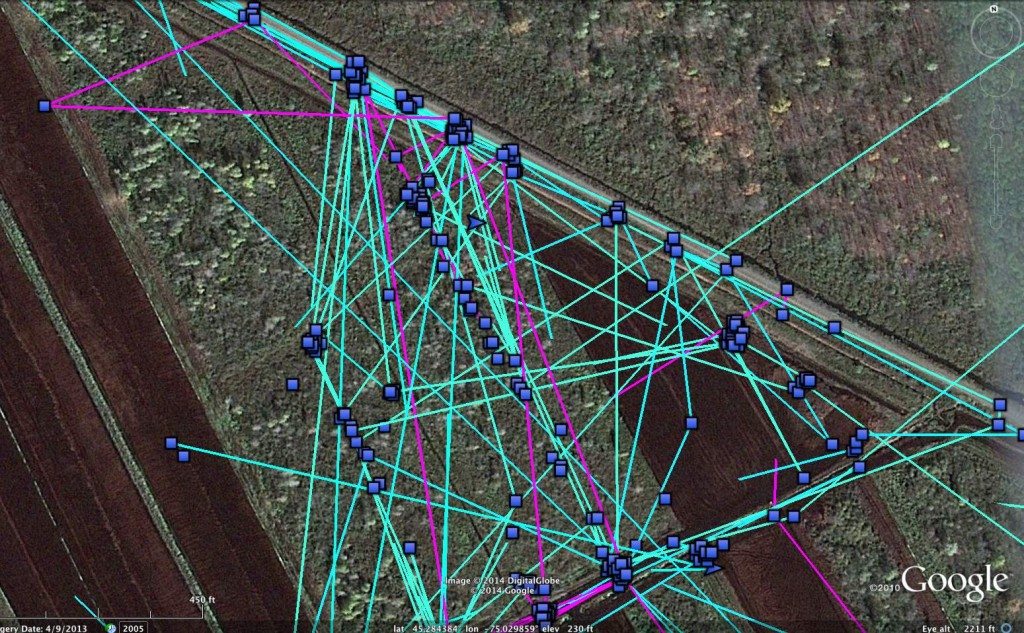 It’s interesting to look at his perches (older tracks are in pale blue, the latest ones in purple). You can see just where the utility poles are placed along the tracks, exactly 40 m (43.7 yards) apart.

Amishtown is still hanging out at the north end of Georgian Bay, near Killarney, Ontario — out on the ice, but also onshore at George Island and Badgeley Island: 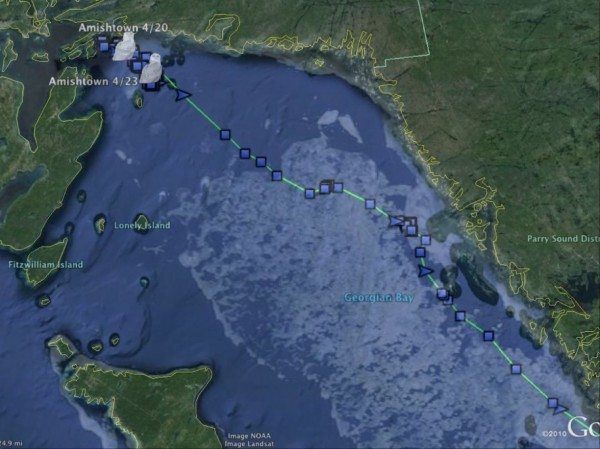 The receding ice on northern Georgian Bay, where Amishtown is hanging out, (©Project SNOWstorm and Google Earth; MODIS ice imagery by NOAA CoastWatch)

Finally, Kewaunee is loafing on Green Bay after his flight to the UP of Michigan last weekend. There’s still a lot of ice cover on the bay, but that’s increasingly rotten, and a fresh warm spell will eliminate a lot of it.

There are several owls that were in southern Canada when the last checked in, but which have dropped off the grid the last couple of cycles. We can’t be sure if they’re still somewhere that just has spotty cell coverage, or if they’ve moved north of the fairly narrow cell band in southern Ontario and unlikely to check in again this season. These include Braddock (last transmission April 14), Womelsdorf (April 17) and Erie (April 14). The same could be true of Marshfield (April 8, last heard from on Mille Lacs Lake in northeastern Minnesota) and Century (April 5 on the southern edge of the Adirondacks near Saratoga, NY).

Ramsey, on the Brink?
From Ramsey, to Ramsey, by Ramsey