I can’t believe we haven’t yet used this title! Tuesday was a snow day here at my Maryland home. We had only a few inches of snow, but it was enough to close schools and snarl commuter traffic into the DC area. I worked from home which spared me from several hours worth of driving to and from work and gave me some extra time in the evening to catch up on this other SNOWstorm.

Dave, Scott and I were all away for the holidays so it’s been a while since our last update. I took my week vacation on the Maryland coast with hopes of banding a few snowy owls as I did last year. We have only had a few owls in Maryland so far this season, none of which have remained very long. There have been reports of several in Delaware, but it seemed as though they were also taking time off for the holidays when I went out to trap them. I saw only one distant owl, far across a marsh, flying away from me. There are many to the north, but I suspect we won’t see many more down here unless a good freeze sends large numbers of ducks south. Will this current cold snap send a few snowy owls my way? I was pondering this theory when my phone beeped, alerting me to a text message; a notice from CTT of an owl checking in. Erie has returned! The snow and cold has sent a SNOW, just not as expected.

Erie is now the third of our owls from last season to report back to us. Coincidentally, he was banded along with Millcreek, the first of our three returns, near Erie, PA. We initially thought that he may have flown quickly north out of range of cell service after his last set of locations ending on April 14. But his current data set shows he remained in the Great Lakes region until at least April 27. 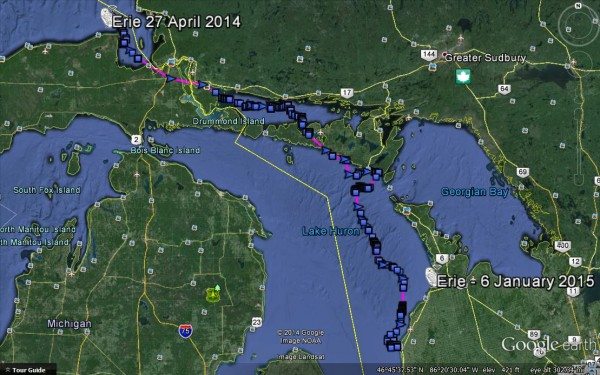 His connection tonight came from the southern base of the Bruce Peninsula which separates Georgian Bay from Lake Huron, only about 40 miles from where we last heard from him on April 14. He then drifted and made short hops on the lake ice before reaching Manitoulin Island on the 18th. He quickly crossed Manitoulin then resumed riding the ice until reaching Saint Joseph Island on the 25th when he made a quick flight just south of Sault Sainte Marie to the waters of Lake Superior.

Most of this journey was out in the water, far from any cell towers, yet those times over or near land were mostly through areas with sparse coverage. This explains why we did not hear from him during this period, but what about the rest? We are anxious for the next report to see where he went and where he spent the summer. He was heading in a westerly direction. Will he veer west around Hudson Bay? Will he go to the Ungava region where Millcreek and Century spent the summer or will he go somewhere else? You can follow Erie on his interactive map, explore his journey and make your own guesses as to where he went next.

We’ll continue to update you as he checks in and fills in the blanks for us.