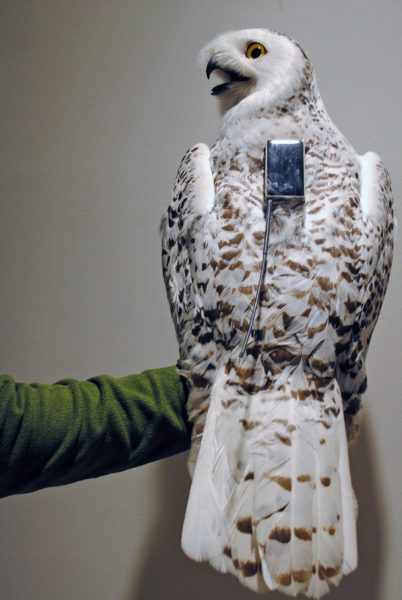 Amherst with her hybrid GSM/Argos transmitter, when she was tagged in 2020. (©Rebecca McCabe)

One of our previously tagged owls to return last autumn was Amherst, an adult female captured in February 2020 on Amherst Island on Lake Ontario. She was fitted with what was then an experimental GSM cellular/Argos satellite hybrid transmitter. After she migrated north that spring we didn’t hear anything from her for another 19 months, until she came south last December and, from a location just south of James Bay, uploaded almost 20,000 GPS points showing that she’d nested both of the preceding summers in the Arctic.

But then Amherst went dark again, and we began to wonder if she’d come to a bad end. Several times her transmitter connected, but sent no data or a current location. CTT, which makes our transmitters, pushed through a new command to lift a precautionary limit on how much battery power a transmission could draw, in the hopes that this would at least give us a location to which we could send someone to search for her.

Instead, a few days later we got a very unexpected email from Sue Meech, who runs Sandy Pines Wildlife Centre in Napanee, ON. Amherst had been found in early March on a back porch on Amherst Island, unable to fly and with what appeared to be some bruising along the bones in one wing, and brought to Sandy Pines. Sue and her staff removed the transmitter — which was missing its external Argos antenna, hence the problems with transmitting — so they could complete her physical exams and X-rays.

Although her injuries seem relatively minor, Amherst is still showing little interest in flying, so they’re giving her the time and space in a large aviary to recoup from whatever injured her. Our hope is that if she’s eventually released, we may be able to replace Amherst’s transmitter with a new unit, but there are permit hurdles to surmount in order for that to happen. Our biggest concern now is that she continue to get the best care possible, with the hope she’ll eventually be released — whether or not we can continue to track her.

Big thanks to Sue Meech and her staff at Sandy Pines for their expert care, and to all the good folks on Amherst Island who have been supporters of snowy owls for many years.

10 Comments on “Some TLC for Amherst”