Fond du Lac took quite the little excursion across Lake Michigan, almost all of it over open water. (©Project SNOWstorm and Google Earth)

The past couple of weeks have seen some pulses of late-winter warmth into the Northeast, and along with longer days, it’s definitely having an effect on some of our owls. This is the time of year when we expect breeding-age adults especially to get antsy, and several of them have indeed begun moving in a noticeable way — though in one case, a young owl is moving in decidedly the “wrong” direction.

Let’s start with those snowies who are still holding steady on their winter-long territories. That’s the case for Wells in Québec City (though she’s spending more time along the riverfront); Echo on Lake Ontario; Hochelaga and Nicolet in Montréal; Otter up on Lake Abitibi in western Québec; Roc at the Rochester, NY, airport; Romulus in the thumb of Michigan; and Stella in southern Saskatchewan. 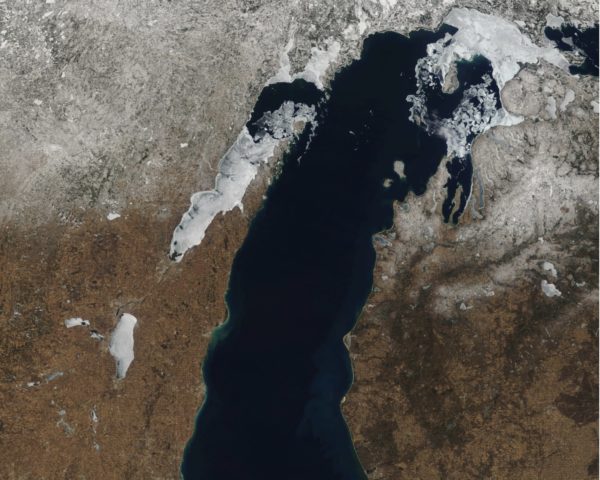 Since early March, Columbia has moved 80 miles (125 km) north from near Fargo to Grand Forks, ND, where since March 16 she’s been hanging out around the Grand Forks sewage disposal ponds. But Fond du Lac, who had been anchored at a golf course south of Traverse Bay, MI, for much of the winter, really hit the road March 11. Over the next six days he flew a total of 340 miles (545 km) in several big loops west across Lake Michigan to Green Bay and Big Bay de Noc on the Wisconsin/Michigan border, then east back to Grand Traverse Bay to exactly where he’d started, the Crown Golf Club. In doing so he crossed more than 65 miles (105 km) of open water twice, because Lake Michigan is largely ice-free this winter. 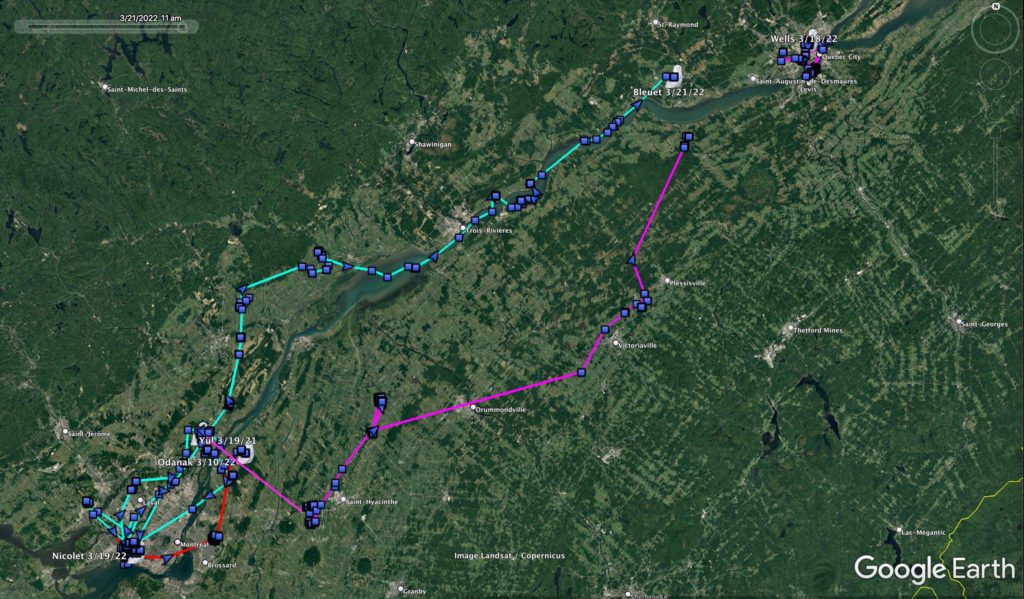 Bleuet (blue) has moved hundreds of kilometers northeast along the St. Lawrence, while Yul (purple) went almost to Québec City and returned, and Odanak (red) has been off the grid since March 10. (©Project SNOWstorm and Google Earth)

In Québec, three of our Montréal-area owls have been on the move. Odanak left the airport on March 7 and last checked in March 10 about 45 km (28 miles) northeast of the city; we’ve had nothing from her since, which may indicate she’d moved up into southern Québec where the cell service is much spottier. Yul has been moving a lot, but her transmitter voltage has been fluctuating and we have a lot of gaps in her data, but in late February she flew almost all the way from near Montréal to just short of Québec City, then returned to near Saint-Hyacinthe. On March 19 she had crossed the St. Lawrence and was just beyond the Montréal suburb of Repentigny.

Bleuet also made a bunch of short exploratory flights away from the Montréal airport in late February, then on March 16 began a determined migration northeast along the north shore of the St. Lawrence, covering 224 km (140 miles) in three nights. Today she was near Pont-Rouge, QC, about 30 km (18 miles) from Québec City. 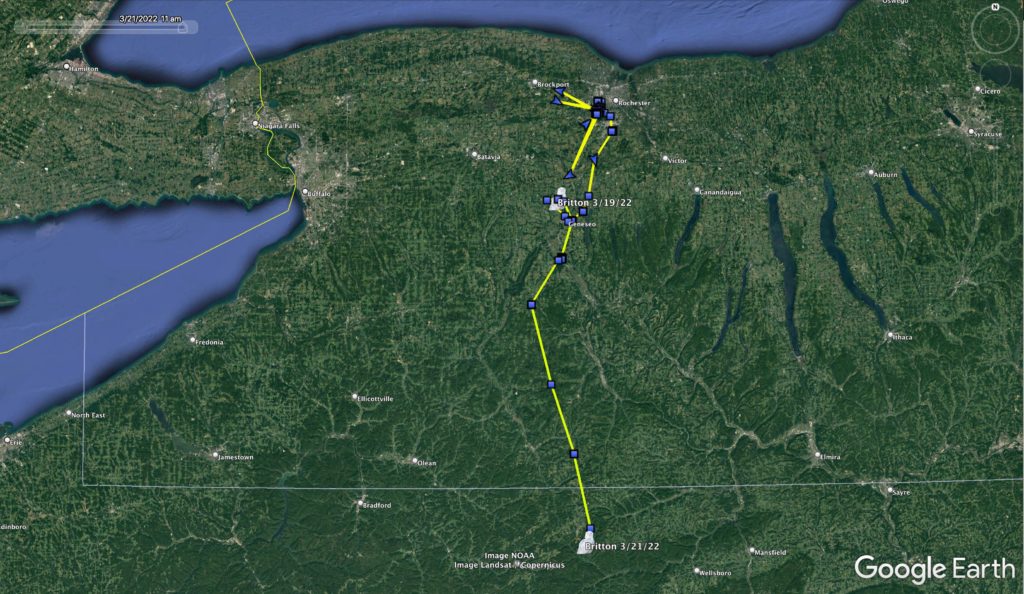 The one owl going the wrong way — at least for this time of year — is Britton, the immature female relocated last month from the Rochester, NY, airport. She quickly boomeranged back to Rochester, but in the past week she began moving, making short flights away from the airfield. Then on March 18 Britton began flying almost due south, and by midday today she had moved 85 miles (137 km) into northcentral Pennsylvania, near the town of Ulysses in Potter Co. (When she was near Geneseo, NY, our friend Aaron Winters got this great photo of her perched on a fencepost.)

She’s just on the northern edge of the densely forested Allegheny Plateau, which is hardly good habitat for a snowy owl, and may convince her to turn north again — but maybe not. Why go south at a time when a lot of birds are migrating north? You’d have to ask Britton, but we often see a kind of pre-migratory restlessness (ornithologists use the German term zugunruhe) in snowy owls at this time of year. This will be Britton’s first northbound migration, and her body may just be telling her it’s time to move, without yet giving her the hormonal direction to specifically go north. Also, snowies don’t mature sexually until they’re at least a few years old, so she doesn’t have a biological clock ticking down the days until breeding season in the Arctic, like the adults do.

Some TLC for Amherst
Echo on the Ice

10 Comments on “On the Move (Direction, um…Uncertain)”