Thanks for visiting the Project SNOWstorm blog – we’ll be updating it regularly with news about snowy owls and the research we’re conducting this winter.

This enormous project – which has dozens of partners and team members stretching from Minnesota to New England – came together in a matter of a few weeks starting in early December when the magnitude of the snowy owl irruption became clear.

That’s by way of saying that this is all a work in progress. We’re continually expanding the reach and scope of this project as new funding becomes available (and a big thanks to our many early donors and Indiegogo supporters who have stepped up to help).

We currently have two owls tagged, but that number will be increasing dramatically in the next week or two, as we add more birds in Pennsylvania, Massachusetts, Delaware, New York, Wisconsin, Minnesota and elsewhere.

Dr. Cindy Driscoll, Maryland’s state fish and wildlife veterinarian, is coordinating efforts in many states to collect tissue samples and arrange necropsies from dead snowy owls, as well as to get health information and samples from birds brought in to rehab centers that will eventually be released.

And we’re encouraging anyone who sees a snowy owl to report it here and at eBird.org – and upload your clear photos of the open wing or upper surface of the tail, which will help us determine the bird’s age and sex.

I just checked up on our two tagged owls. Buena Vista, a young male tagged Dec. 23 on his namesake grasslands in Portage County, Wisconsin, hasn’t checked in since Dec. 30. We suspect this is because the weather in central Wisconsin hasn’t been great the past few days – they’ve had a lot of clouds and snow, and the solar-charged battery wasn’t getting much juice. Extremely cold temps may also be playing a role, but we expect to get a data dump from him once the sun returns. He’s been staying within a roughly one-square-mile area since he was tagged, hunting for voles and other rodents in the frozen marshes and grasslands.

Meanwhile Assateague, the immature male we tagged on that island in Maryland Dec. 17, has continued to confound our expectations. Here’s a map of his wanderings all over the mid-Atlantic coastline. (Ignore the track past Salisbury – that was the transmitter being driven to the island.) 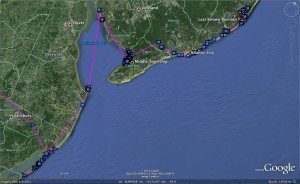 Assateague’s movements from Dec. 17 to Jan. 2, from Maryland up the New Jersey coast.

He’s flown more than 200 miles, and almost 150 miles straight-line, since he set out – and of course, to our way of thinking he’s going the wrong way. But at least some of these owls wander widely and wildly, and this kind of movement may be more common than we suspected.

And here’s a look at why we’re so excited about the potential for these GPS-GSM transmitters. This is a close-up of one portion of Assateague’s time in Reed’s Beach, NJ, just north of Cape May. Thanks to colleagues on the ground, we were able to confirm that he was – just as Google Earth shows – sitting on particular pilings in the tidal creek, or on the end of the jetty. We could even tell that he was perching on, say, the north-facing slope of a beach house roof, and not the south-facing side. 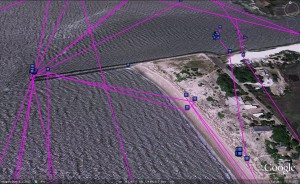 A close-up of Assateague’s movements at Reed’s Beach, NJ.

That incredible detail is part of the equation – the other is timing. Satellite transmitters give precise positions, but to save power (and money, because you have to pay through the nose for satellite time) they usually just record one or two positions a day.

The transmitters we’re using are capable of recording a position as often as every 30 seconds. Right now we’re testing battery strength and recharge rates, and being very conservative, but we’re still getting positions every 30 minutes, and that should drop to every 10 or 15 minutes soon as we continue to test the limits of the technology.

What does a snowy do in the snow?
Project SNOWstorm launches on Indiegogo