The Northeast got smacked last night with a nasty snowstorm that reached blizzard levels in some areas. On the New Jersey coast, where Assateague has been hanging out, it wasn’t quite that bad, but snowfall totals reached 10 inches, with high winds and coastal flooding warnings.

You’d think a snowy owl would love this weather, but it’s apparent from Assateague’s locations that he didn’t go out and play – he simply hunkered down on the small island in lower Barnegat Bay where he’s been the past two days. Unlike previous nights, when he was roaming over miles of open water, checking out the mainland shore and smaller islands, last night he stayed put. He did the same thing today, but then, snowies usually roost quietly in the daytime. 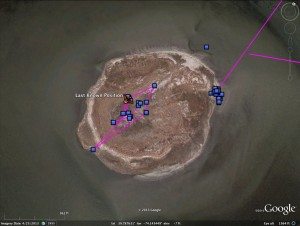 Being a homebody: Assateague hung out most of last night and today on this small island in Barnegat Bay, waiting out the storm.

It’ll be interesting to see if he resumes his march up the coast tonight, or simply concentrates on hunting after a night when he was, essentially, stuck in the house.

And speaking of his previous nights’ wanderings around Barnegat Bay, I was struck by several stationary (as opposed to in-flight) locations, like these two.

When I zoomed in on Google Earth, it became clear why he was there – a big channel marker or buoy, a perfect marine hunting platform for a nighttime predator. If I was a scaup or black duck (or even a brant) I’d settle down for the night somewhere far from one of those convenient perches. 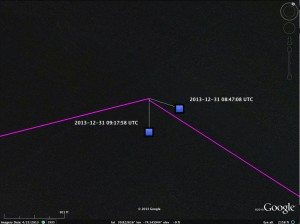 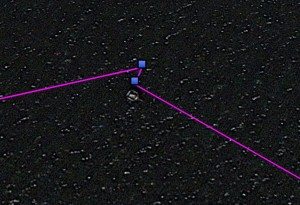 The mystery revealed – a big channel marker or buoy on which he’d been perching.

Back on the prowl
The SNOWstorm begins