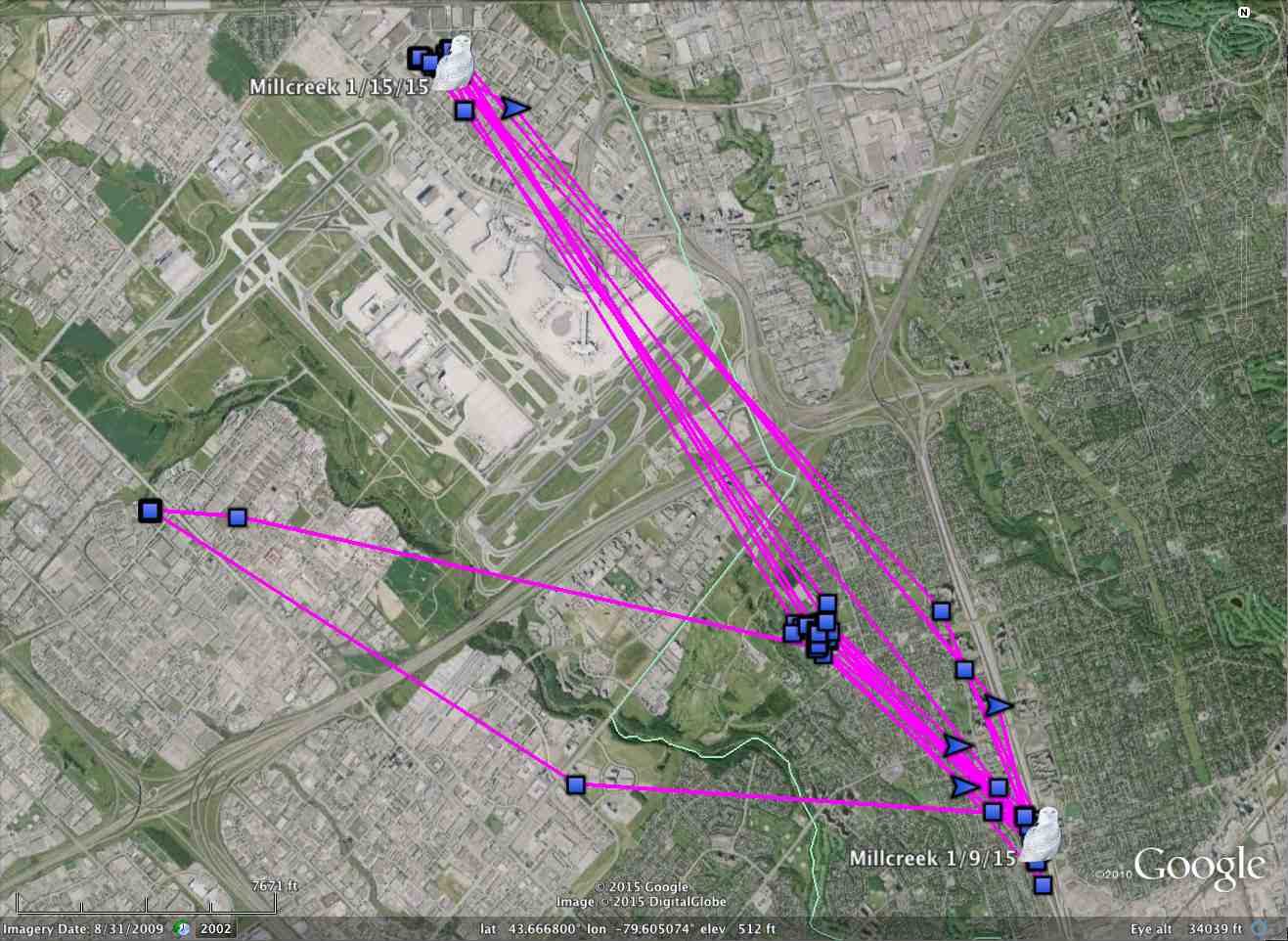 Millcreek’s recent movements around (but not on) Toronto’s Pearson International Airport. (©Project SNOWstorm and Google Earth)

Millcreek was the first of last season’s owls to return to cell range in November, but we’ve been holding back on mapping his location recently because he was using a fairly small, rather accessible area near Toronto, and we wanted to give him some breathing space.

But he’s been moving less predictably lately, and using a wider local area, so while that lasts we’ll be able to update his map — still keeping everything one transmission cycle behind, just to be careful.

Millcreek’s been close to (but thankfully avoiding) the Toronto Pearson International Airport, roosting instead on many of the immense, flat-topped buildings in the surrounding area. For a while, he was using the stadium grandstand at Centennial Park, which with its highly reflective aluminum seats provided a real boost to his solar-powered transmitter.

Andy McGann at CTT, which makes the GPS-GSM transmitters we use (and is providing them to us again this year at cost) used the 3D feature of Google Earth to create the follow video of Millcreek’s activity on the evening of Jan. 9. Because Toronto has terrific 3D building data, you’ll get a very realistic vision of how this snowy owl sees the landscape when it wakes up and goes hunting. (The imagery is from summer, which is a little disconcerting.)

While we’re relieved Millcreek has been avoiding the airport, we’re not so happy with his choice of hunting locations. He’s been commuting about 8 km (5.5 miles) from the airport vicinity to several large freeways, notably Highway 403 and Highway 427. The latter is his favorite, using a highway directional sign and a very tall streetlamp mast for his perches. He’s been reported at least once on eBird in these areas.

Although he did some hunting along I-79 in Erie shortly after he was tagged last winter, Millcreek was an owl that spent almost all of last winter out on Lake Erie ice, well away from manmade hazards. He’s a year older now, and hopefully that much wiser, but we hope he’s careful up there amidst all that whizzing traffic.

We just pushed through an update to Millcreek’s transmitter with a new duty cycle, one intended to conserve battery power. Instead of transmitting every three days, his unit will now do so once a week, which should help save juice on these short, often cloudy winter days.

We’d like to do the same with Century’s unit, which has been struggling with the low sun angle and short days. Her unit checked in again Monday night, sending us a bit more of her stored summer data, but it’s having trouble maintaining a good charge. In fact, this time it browned out before it sent a current location, so we’re not sure if she’s moved much from her last known location near Quebec City.

SNOWstorm 2.0 on Indiegogo!
Erie (the place) and Erie (the owl)

2 Comments on “Update: Millcreek and Century”