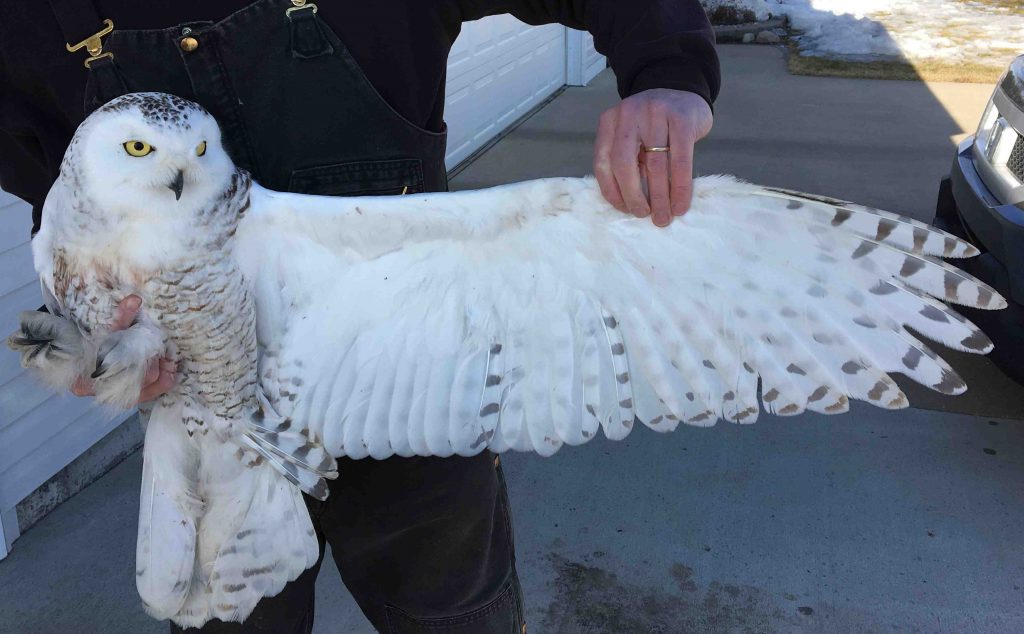 It’s been a rather frustrating winter for Matt Solensky, our Project SNOWstorm colleague in North Dakota.

His hope (and ours) — that he would be able to quickly trap and tag a couple of prairie-hunting snowy owls this winter — proved to be a little too optimistic. Deep and crusted snow kept the number of owls in eastern North Dakota unusually low this season.

On top of that, Matt had buzzard’s luck on the few times when came close to making a catch. In late January, for example, he had an adult male come barreling into his bownet, only to have the netting snag and the trap not close. Matt reset the trap, but while the owl made several more passes, once full darkness fell the owl flew off. 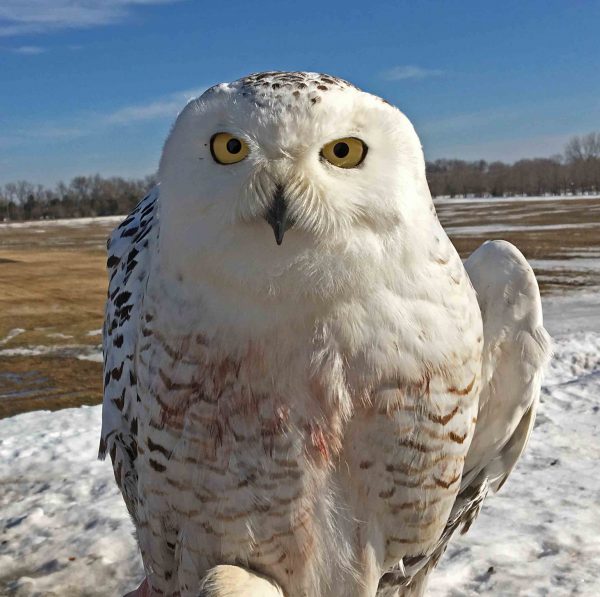 Last week, Matt sent an apologetic report. “I wish there was more exciting news to report, but the reality is not much has changed the past few weeks,” he emailed Feb. 16. “Not many birds around, and those that are here seem content to sit half a mile away until dark.” Despite a lot of effort, he was no closer to getting a new prairie owl.

But Matt, a biologist at the USGS Northern Prairie Research Center, kept plugging away. He continued to monitor that white adult male that eluded him last month, as well as what he believed was an adult female, both close to Chase Lake National Wildlife Refuge near Woodworth, ND, across the county from where Matt tagged Dakota last winter.

“Rarely was she ever close enough to where I could even place the trap to try for her,” Matt said of the big female, who mostly stayed a half-mile or so from the section roads. “Almost every time I saw her she would do the same thing — sit and do nothing but wait until the sun set, and then fly off, presumably hunting.”

Finally, Matt’s luck began to shift. He was able to get a bal-chatri trap (one of the noosed cage traps we sometimes use) reasonably close to the owl, which flew in to take a look. Matt retreated to his truck, but as the owl sat on an irrigator checking out a possible meal, it began ducking and weaving — a pugnacious little merlin was dive-bombing it, and eventually the owl flew out of sight.

The next day, though, Matt returned. He found but quickly lost sight of the adult male — the many unplowed roads made getting around difficult, but in the process of searching, he encountered the female again, relatively close to the road this time. The sun was about to set — the witching hour for snowies, when they come alive and start hunting in earnest. Matt dropped a bal-chatri, but instead of going for the pigeon, the owl and Matt both watched two sharp-tailed grouse fly overhead.

“The grouse were making their tucka-tucka call as they went to find a roost for the night. I watched their silhouettes get smaller and then looked to see what the owl was doing — just in time to watch her hastily head in the same direction the grouse had gone,” he said. 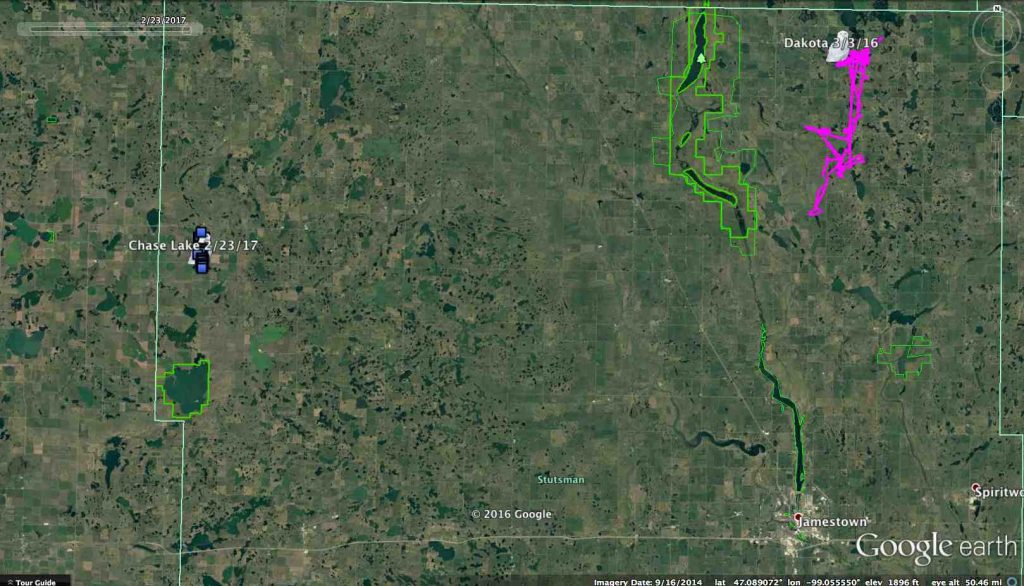 The relative locations of Chase Lake compared with Dakota’s winter 2015-16 territory at opposite sides of Stutsman County, ND. (©Project SNOWstorm and Google Earth)

This was getting frustrating, so Matt took a break from snowy owl trapping, called a buddy and decided to do some ice fishing — but they also brought the BC trap and some pigeons in case, as Matt put it, “the fish weren’t biting and the owls were.” After catching a couple of pike, they quickly found the female owl perched along a road. Although the owl flew off, and they had to hunt a bit to find her, they eventually located her on a fence post near a road, where they dropped the trap and backed off.

This time, the stars aligned, and after a few passes, the female put her foot in a noose and was safely in the hand — an adult female in her second winter weighing almost 2,100 grams. She had dried blood on her breast feathers — the vivid remains of her meal the night before, which Matt is certain was one of those two sharp-tailed grouse.

We’re calling her “Chase Lake,” named for the national wildlife refuge just down the road a bit. “Typically, this is a great spot for snowy owls and many other prairie birds,” Matt said, “but since it is not plowed, access this year was impossible.” For a while, tagging a new North Dakota owl was looking impossible, too — but fortunately, Matt doesn’t know when to quit. 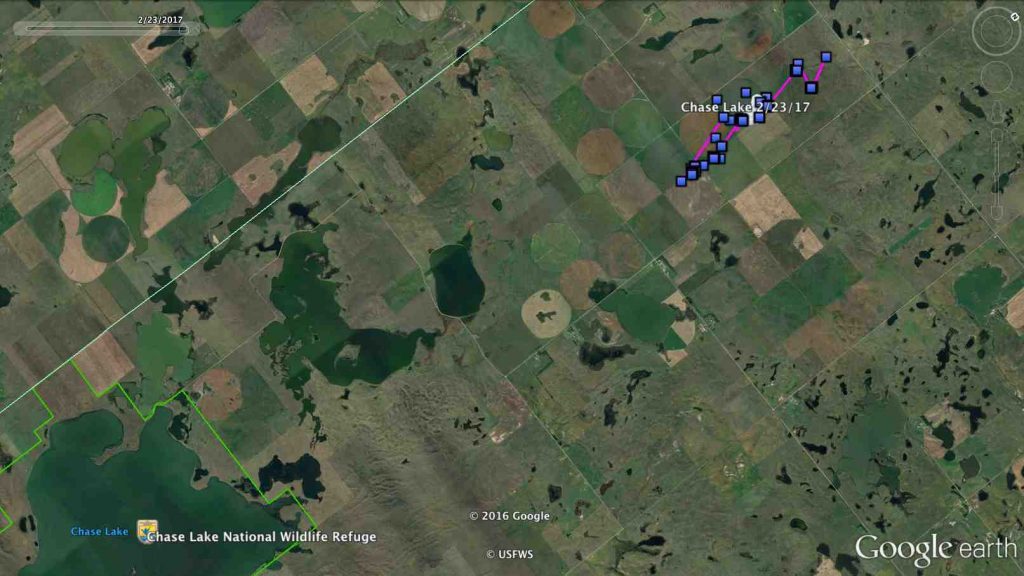 As of Thursday evening, Chase Lake was just north (to the upper right on this map view) of her namesake national wildlife refuge. (©Project SNOWstorm and Google Earth)

Wells is on Her Way
Dakota and Hardscrabble: The Rest of the Story