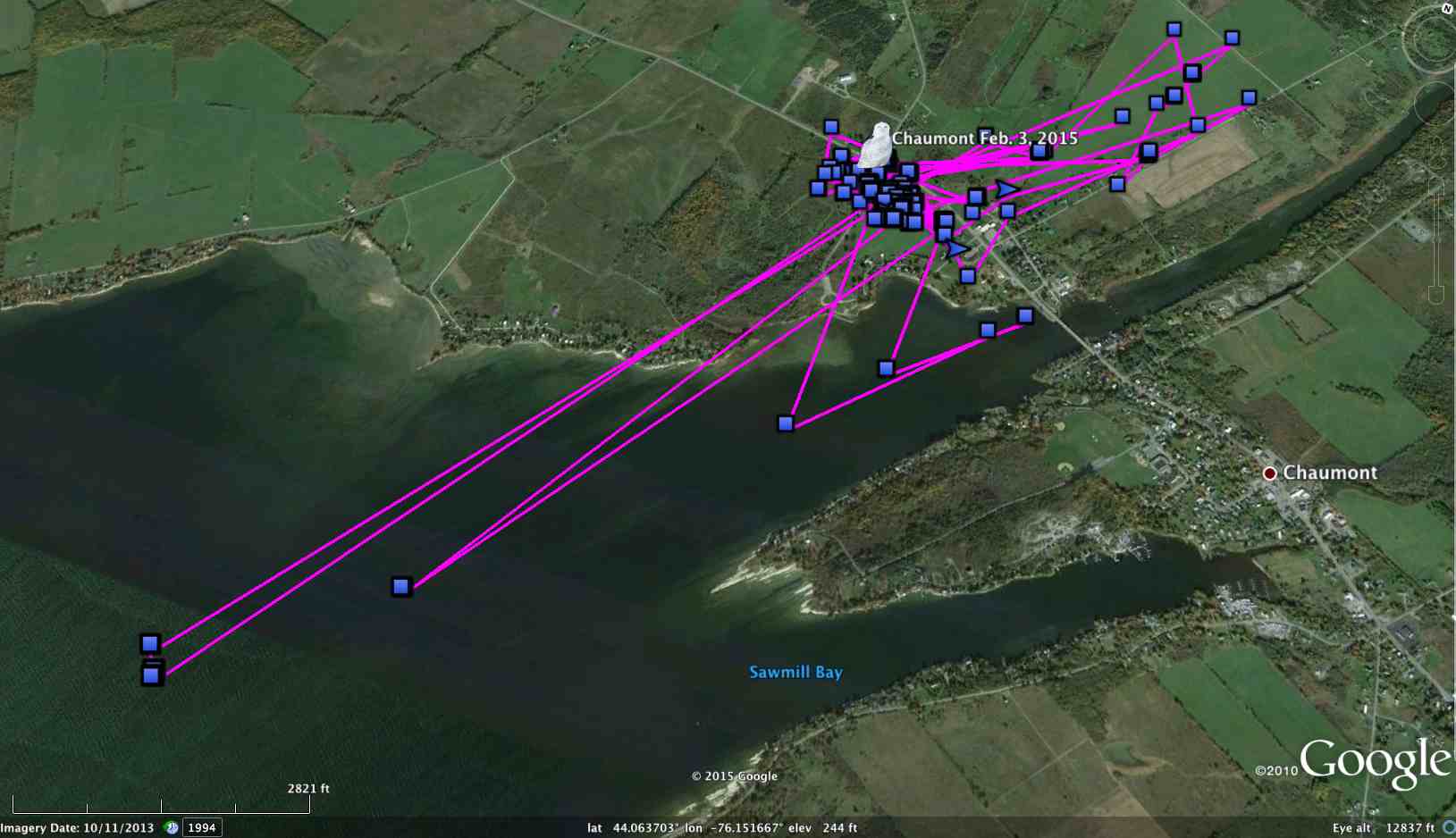 So far, Chaumont is hanging tight to land, and only rarely venturing onto the growing ice pack on Lake Ontario — a real difference from what many of our owls have done. (©Project SNOWstorm and Google Earth)

Patience is one of the things snowy owl tracking teaches you, and we’ve been patiently waiting to hear from Chaumont, the adult male owl that Tom McDonald tagged last month on the northeastern tip of Lake Ontario, near the New York village of the same name.

We assumed from Chaumont’s long silence that he was out on lake ice, but it appears he was just hanging around in a dead zone for cell reception (coverage is spotty in that area, just south of the Thousand Islands). Last night he checked in with a couple of weeks’ worth of data, and we’ve updated his map through Feb. 3.

He’s been spending a lot of time in the farmland on the north side of the Chaumont River, using utility poles along Rt. 12E as his hunting perches. For some folks there, he’s literally a backyard (and often front yard) bird.

Although the ice cover is now extensive across the northeastern bay system, from Stony Point in New York to Prince Edward Point in Ontario, Chaumont is spending relatively little time out on the lake, having only made a couple of flights offshore.

On Jan. 26 he was about a mile off the mouth of the river, and spent a great deal of time in two spots without doing much; my guess is he flew out, made a kill there, ate and then rested until he flew back to land around daybreak. On Feb. 1 he was back out on Chaumont Bay in the final hours of the night, staying only for an hour and a half before coming back to shore.

This is interesting, since four of our Great Lakes snowies last winter (Braddock and Cranberry on Lake Ontario, Millcreek and Erie on Lake Erie) spent the majority of their time out on the ice, often for weeks at a time. By contrast Kewaunee, tagged last year in Wisconsin, spent the winter less than a mile from Lake Michigan but never ventured onto the ice — until it was time to start moving north.

Then he shifted out onto the frozen surface of Green Bay and western Lake Michigan before disappearing north May 2. Similarly, many of our other inland wintering owls took to the ice of the Great Lakes once they started migrating north — and we’ve seen that some of them continued to zero in on ice once they got to the subarctic for the summer, in Hudson Bay or the Davis Strait.

That’s one of the many things that have been consistently fascinating about this project — the insights it provides, not just into the species as a whole, but into the behavior of individuals. Every snowy owl is unique, and it will be interesting to see if Chaumont continues to hunt terrestrial prey, or if at some point he switches to an aquatic diet of waterbirds out on the ice like a lot of his fellow snowies.