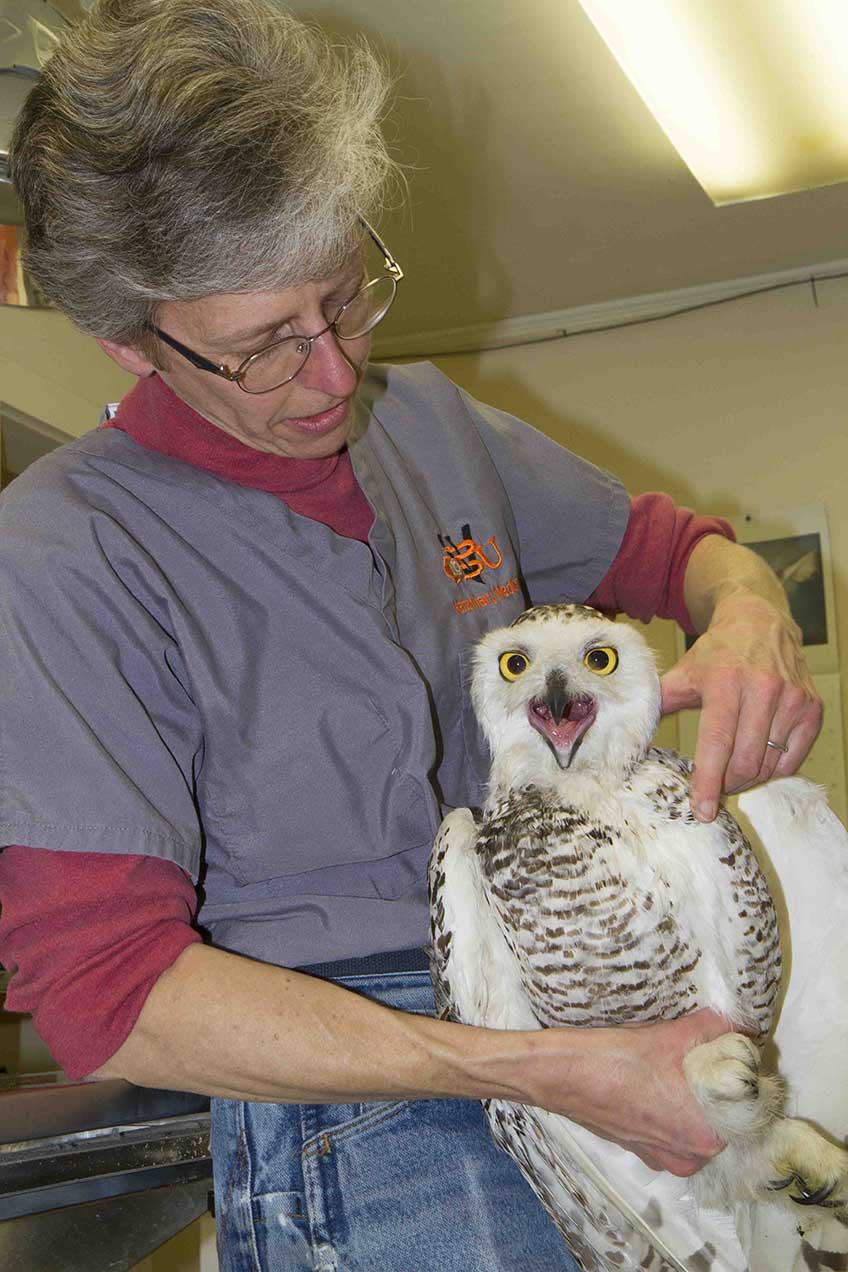 Newly retagged (and a little bedraggled after being spritzed with some cooling water), Monocacy expresses her displeasure to Dr. Erica Miller (©Scott Weidensaul)

I had just finished giving a talk in Delaware last weekend and was climbing in my car, listening to voice mails.

Our friend and colleague Dr. Erica Miller, a volunteer veterinarian with Project SNOWstorm, was on the line, and I could instantly tell from the tone of her voice that something big was up.

Erica had some electrifying news — a banded snowy owl with a backpack transmitter had been trapped at New York LaGuardia Airport in Queens. Because of a minor injury, Erica said, the bird was at the Raptor Trust in central New Jersey for an evaluation.

The news was electrifying because, so far as we knew, none of our tagged owls were within a couple hundred miles of the metro New York area. The nearest possibility was Chaumont, tagged 250 miles to the north on Lake Ontario — but he was a male. The band series used on this bird ended in 9, meaning it was a size 9 band — the kind used only on big females.

I was baffled the whole drive home, itching to look up the band number — and when I did, everything fell into place.

Monocacy had turned up again.

The final owl we tagged last winter, Monocacy was a big female trapped Dave Brinker and Steve Huy at the Martin State Airport in Baltimore, then relocated more than 40 miles northwest, to rural Carroll County, Maryland, where she was released on March 16. (Because snowy owls are such a hazard to planes, and vice versa, they are often trapped and relocated from airports.)

She didn’t stay there for long. The same night she was released, Monocacy took off like an arrow to the southeast. Within two days she was back in Baltimore, where she became the most resolutely urban of our tagged owls, staying in the city center and around the Inner Harbor.

Unfortunately, we eventually lost track of Monocacy because of an experiment that didn’t end when it was supposed to. Normally our transmitters log GPS locations every 30 minutes, but they can be reprogrammed on the fly, and so with Monocacy — whose transmitter was holding a really strong charge — we decided, for a limited time, to squeeze as much data as possible out of her movements.

So we reprogrammed her unit to log locations every 30 seconds. We knew this would eventually drain the battery despite the solar recharge, so we watched the daily voltage report, and when it began to fall into the danger zone, we sent instructions to revert to a 30-minute cycle.

For reasons we never understood, though, the transmitter didn’t reset itself. The next day it sent another batch of more than 2,000 locations at 30-second intervals, then fell silent.

Now she had reappeared, the fifth of last year’s owls to show up so far this winter. While the circumstances of her appearance weren’t ideal, we’d have the chance to swap her old transmitter for a new one.

Fortunately, Cathy Malok at the Raptor Trust told me that Monocacy’s injury — a small laceration on one wing — was minor enough that it wouldn’t even require stitches. Furthermore, she said, there was no sign of any rubbing, abrasion or other issues with her old Teflon harness or transmitter.

So yesterday I drove to the trust’s facility on the edge of Great Swamp National Wildlife Refuge near Millington, NJ, where Erica met us in the infirmary building to lend a hand. Monocacy looked great, though she clearly wasn’t happy in Erica’s practiced grasp. 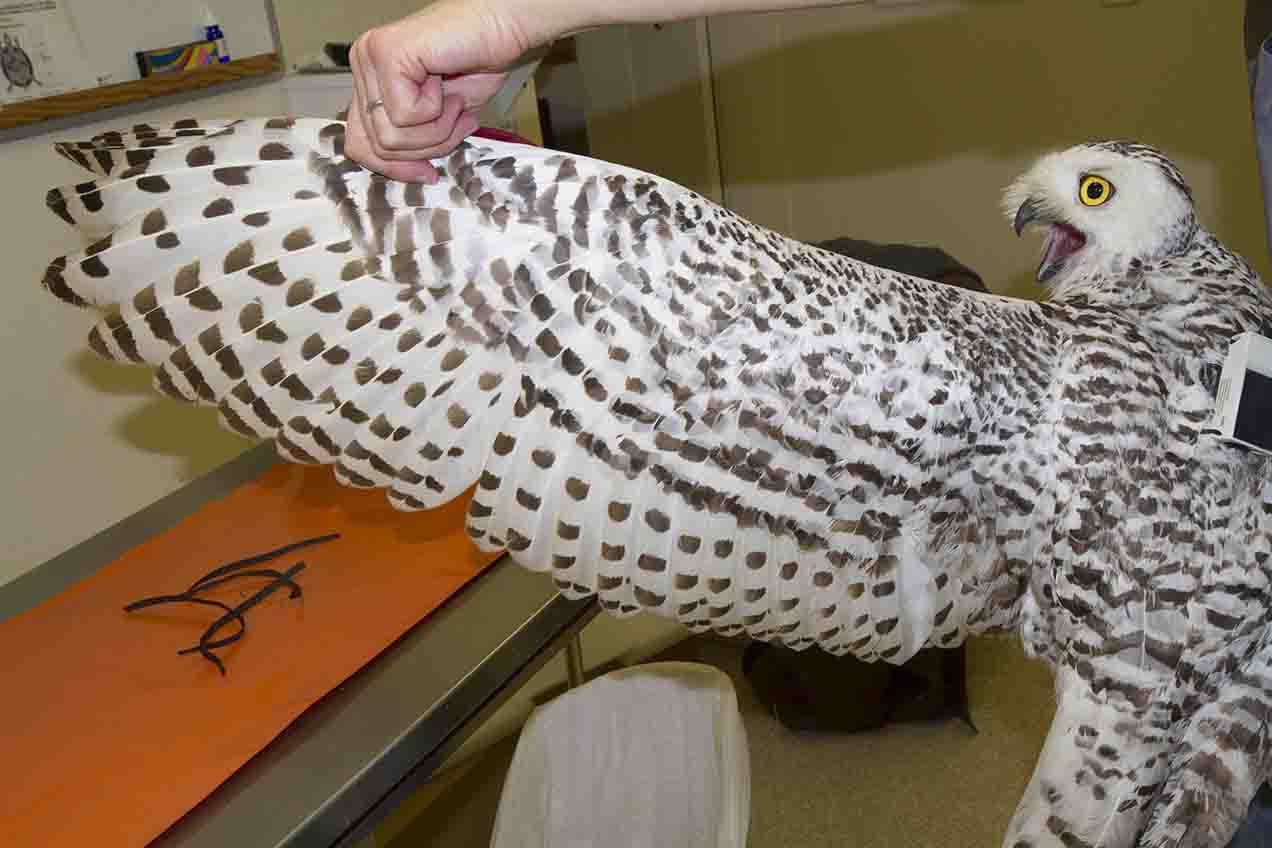 Typical for a snowy owl in its third calendar year, Monocacy has replaced her outermost primary feathers, the first step in a multi-year molt sequence of flight feather replacement. (©Scott Weidensaul)

We take our time when we’re putting on a harness, because the owl is going to wear these solar-powered transmitters for life. As we adjusted, tucked and tweaked Monocacy’s new harness, neither Erica — who has a lot of experience putting transmitters on eagles — nor I were happy with the fit. So we cut off the expensive Teflon ribbon and started fresh. Cathy periodically spritzed Monocacy in the face with a water mister to keep her cool.

This time the harness fit perfectly, keeping the new transmitter high in the middle of the back where it’s supposed to ride. A couple of body feathers that came out in the process were bagged; we’ll compare the stable isotopes in them with those in her juvenile feathers collected last winter. The Raptor Trust staff had already taken a blood sample, which will allow us to check aspects of her health, and to see what chemicals and toxins she may have picked up since her first blood test last year.

This evening, just before sunset, Monocacy was released on Long Island’s south shore. It’s a long way from LaGuardia, and is pretty much perfect habitat for a snowy owl. Beaches run more than 115 miles (186 km), including more than 45 miles (72 km) of protected, uninhabited barrier islands. Behind them lies Great South Bay, with thousands of acres of tidal marshes, jammed with water birds, muskrats and other prey. This is one of the most consistent locations for snowy owls along the Northeast coast, and there have been several reported there this winter.

Will she stay put? That’s the big question. Monocacy has shown a real attraction for urban environments, and we’re all keeping our fingers crossed that the lure of the beach is enough to keep her from going back to Queens, and the runways of LaGuardia. For the time being, we’re going to withhold her current location map to give her a little breathing room.

But there’s also the question of where she’s been the past year. We’ve shipped Monocacy’s old transmitter to CTT, to retrieve whatever data might be on it from the past 11 months.

We’re not sure how well or frequently the unit was working. Best case scenario, we think, is that the battery would recharge enough to log some 30-second GPS locations, then run down below its cut-off and go into temporary hibernation again until the charge built up to start recording — repeating the cycle endlessly, but never building enough charge to transmit.

If we’re lucky, we’ll have a patchy but still exciting record of where she went, especially during the continuous daylight of the Arctic summer. We’ll keep you posted on what we learn, and obviously we’ll map any data we retrieve.

Meantime, many thanks for their help to Erica Miller, and to Cathy Malok and the staff at the Raptor Trust; to Laura Francoeur and Jeffrey Kolodzinski with the Port Authority of New York and New Jersey; and Christopher A. Nadareski, wildlife section chief for the New York City Department of Environmental Protection.