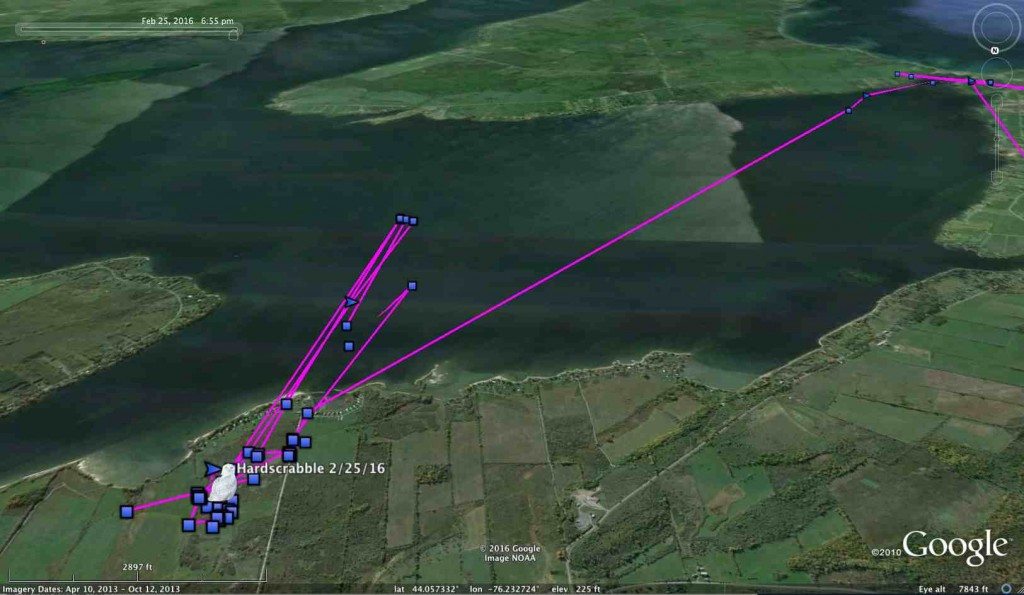 Tom McDonald has been putting in the hours — and the miles — this winter, as he has for more than 25 years of doing snowy owl work. 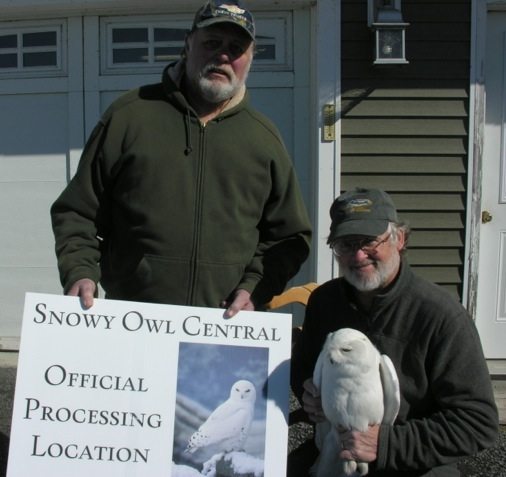 But he really shifted into high gear the past two weeks, after Chaumont moved from Amherst Island in Ontario back across the border into New York. That gave Tom his first opportunity this winter to try to retrap the adult male snowy, and remove or replace the bird’s transmitter, which hasn’t been functioning properly.

Tom wastes no time. The first indication that Chaumont was in New York came through at 7 p.m. one evening, and by 3:30 a.m. the next morning, Tom had left his home in Rochester for the long drive to Cape Vincent, right by the Canadian border. By daybreak he was set up within sight of Chaumont. 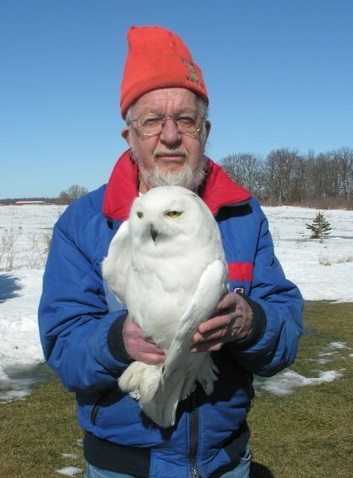 The owl immediately came zooming in on the trap — only to have a large female snowy owl bomb in out of nowhere and scare the smaller Chaumont away.

That was the first of many frustrations for Tom over the next few days, including a major snowstorm and a persistent red-tailed hawk that mucked up another promising trapping attempt.

After that initial daybreak response, Chaumont proved exceptionally hard to catch — perhaps not surprising, because he’s been trapped twice before, once originally in Canada by Nigel Shaw when he was banded, and again when Tom caught and tagged him. Chaumont’s no dummy, but even more importantly, he’s in an area with an overwhelming abundance of meadow voles, and a satiated owl is a tough owl to lure into a net.

Tom’s made several trips to try to trap Chaumont, but on his most recent venture he did tag a new owl — an after-third-year male he nicknamed Hardscrabble for a nearby road (but which could also describe the kind of tough winter Tom’s been having this year).

Hardscrabble is almost completely unmarked, a really stunning bird tipping the scales at more than 1,700g, with significant amounts of body fat. As is often the case, Tom tagged the bird at the nearby home of his friend Bob Gallagher — “Snowy Owl Central,” as Tom has long dubbed the place.

Since his release on Feb. 22, Hardscrabble has been on and around Chaumont Bay, resting out on the ice but hunting for some of those oh-so-abundant voles on land once it gets dark. We’ll have his map posted shortly.

Nor is he the only new owl that we’re tracking — but more about that in the next update!

One Comment on “Chaumont, and an Owl Called Hardscrabble”