On the evening of Jan. 25, Gene Jacobs and I were trapping near Appleton, Wisconsin. The wind was howling and temperature was only around 4F, with wind chill values down around -20F.

We found a female owl huddled behind a snow bank, presumably to get out of the wind and blowing snow, and we looked for a spot to set up the trap. Before we could, though, the owl flew about a quarter-mile away, landed on a roof and looked as though it was going to start to hunting.  We quickly found a spot and set our trap.

She initially appeared interested, craning her neck and bobbing her head. But then something else caught her eye, behind her and out of our sight — maybe another owl, judging the way she was looking. So instead of doing anything she just sat there for more than an hour as the sun set. Suddenly she seemed interested again, changing position before launching herself off the building towards the trap. 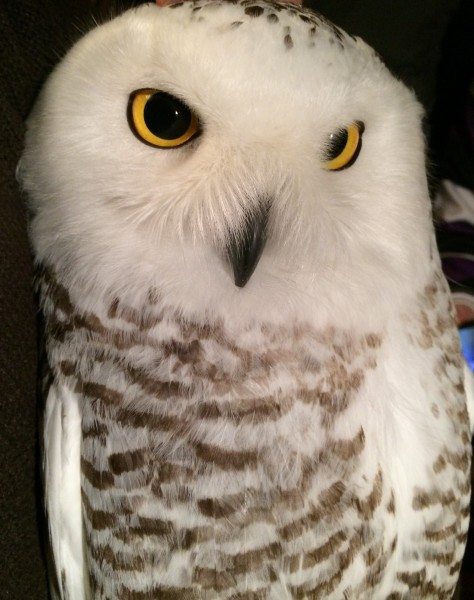 Freedom, who is top owl in her neck of the woods (©Mike Lanzone)

To our dismay, though, she flew right over the trap…. to infinity and beyond. We’d been certain she was coming into the lure, but somehow, with her X-ray senses, she’d spotted a rodent beneath the snow far beyond the trap, swiftly breaking through the snow to grab it. She paused briefly, before taking off and flying out of sight to the south with her prey.

Even though I know how good a snowy owl’s vision and hearing are, it always amazes me when they find prey so far from them, and hidden under snow. I imagine the owl used its hearing to pinpoint the rodent when it got close, but the wind was howling 25-30 mph.

No sooner did we relocate her than she flew back to where we’d just come from, out of sight again. It’s amazing how active snowy owls get at this time of night looking for food! We quickly found her where we’d started, and set up again in the same spot. I was watching the owl for any signs of interest while Gene was looking at the trap.

“Oh! The owl moved back to its same perch again,” Gene said — but I was still watching what we assumed to be the original owl, which hadn’t budged. He’d seen a second female owl, and likely the original bird we had been watching! 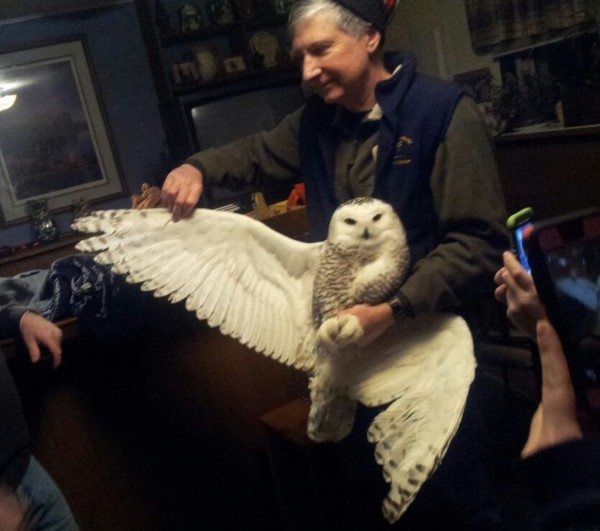 Gene Jacobs shows the wide spread of a snowy owl’s wings as he prepares to tag Freedom — out of the -20F wind chill. (©Mike Lanzone)

What followed was amazing. Gene spotted the closer of the two owls standing in the snow about 20 feet from the trap. For 10 minutes or so it slowly walked towards the trap, stopping periodically to call to the other owl. That bird, in turn, was periodically flying all around and gracefully hanging in the wind. When the owl on the grounded called, it would call back to her with high-pitched whistles.

The owl on the ground seemed to be the dominant bird, and would stare at the other owl for long periods before calling. Her call was longer in duration and more drawn out that the flying owl’s. It was very interesting to watch their interactions. 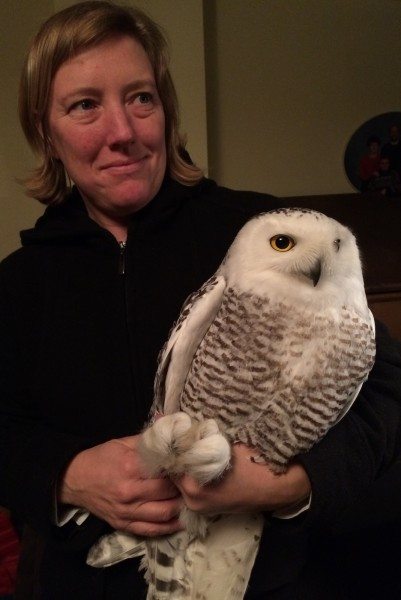 Mike’s wife, golden eagle expert Trish Miller, with Freedom before taking the owl back to her territory. (©Mike Lanzone)

Eventually the owl on the ground made its way all the to the trap and we caught it. We took her to Mike’s in-laws house a few miles away, so we could band her and attach the transmitter in warmth and good light. She was very healthy, and weighted 2046g (4.5 lbs.) — slightly above average size for a female. All went well and after we finished, we released her and she flew off fast. Several wing beats away she rose very high in the wind and headed off to the north, disappearing into the darkness.

We named her “Freedom,” a small town close to where she was hunting after release. Yesterday afternoon her transmitter checked in, and showed that she was roosting on silage bunkers on a dairy farm a few miles east of where she’d been released.

We’re very grateful to the Natural Resources Foundation of Wisconsin, which has generously sponsored this transmitter, and to the Wisconsin Society for Ornithology, which sponsored Buena Vista’s unit. The outpouring of support we’ve had from organizations, agencies and the general public is making this work possible.

10 Comments on “Freedom’s just another word for ‘owl’”