I apologize for the lack of updates the past week. It’s been an incredibly busy one, with a few unexpected wrenches and some great news balancing out each other. This will be a long update. 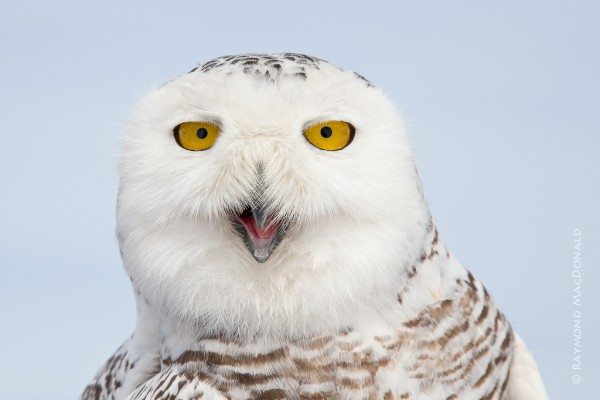 The biggest news is that we completed our Indiegogo campaign this week at $36,663 — 183 percent of our original goal. We’re still gobsmacked by the response, and grateful for the tremendous public support for Project SNOWstorm.

The other big news is the addition of two more tagged owls — “Womelsdorf,” in eastern Pennsylvania, an immature male that I tagged Monday night, and “Plum,” an immature female that Norman Smith relocated yesterday from Logan Airport in Boston to Plum Island National Wildlife Refuge in northeastern Massachusetts.

Gene Jacobs was trapping in Wisconsin this past week, but after being skunked by one owl, he trapped a second, only to find it thin and suffering from a wing injury. That bird is now at a rehab facility, which concluded the injury was from an electrical shock — an often fatal occurrence with large raptors whose wings are wide enough to bridge the space between electrical wires. Hopefully this owl will recover well enough for release. 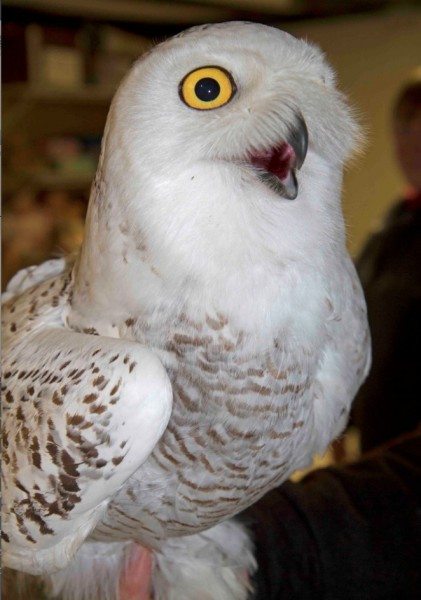 “Womelsdorf” on Monday night, just after getting his GPS transmitter (©Scott Weidensaul)

We continue to delay updating maps by at least three days as a safety precaution for the owls, a policy that took on added importance last weekend when a falconer in Pennsylvania tried to trap a group of several snowy owls that included Amishtown, one of our tagged birds.

Pennsylvania does not restrict the capture of snowy owls by appropriately licensed falconers, although few falconers want an owl of any species, much less a snowy. Still, it caused an incredible ruckus. The president of the largest falconry group in the state has reached out to the falconer in question and urged him to cease his attempts to catch a snowy owl, which we’re told he agreed to do. But there has been at least one other case this winter of a falconer in Wisconsin capturing a snowy owl, and federal regulations apparently would not prevent someone with the necessary falconry permits from taking even a banded, tagged owl.

(This is not a smack against falconry — in fact, SNOWstorm includes one or two falconers among its main researchers. We’re not looking for a lot of comments bashing falconry. Most falconers were as appalled by the news as we were, and the incident has prompted an effort to work collaboratively to tighten Pennsylvania’s falconry regs to prevent such problems in the future.)

For the most part, the tagged owls that have checked in over the past week are doing what they’ve been doing (and where they’ve been doing it) all winter. We’ll have fresh map updates tomorrow for the period March 1-3. But here’s a synopsis of what’s been happening:

Erie continues to wander around Lake Erie, showing a lot of affinity for the northern shore east of Long Point, Ontario. Millcreek is apparently out of cell range yet again, last seen heading out into the central part of the lake Feb. 27. There is an increasing amount of open water cracks in the ice, providing good hunting grounds for waterfowl.

Amishtown, after his near-brush last weekend, has been all over Lancaster County, moving up to 12 miles almost down to Conestoga, then back up toward New Holland again.

In New York, Cranberry hasn’t checked in since Feb. 15, and his transmitter was showing some recharging issues; Tom McDonald in Rochester reports that it’s been persistently cloudy up there, but the bird could also be offshore far enough to be out of cell range. Braddock, on the other hand, has been moving back and forth between Monroe and Orleans counties, sometimes onshore, often offshore near the shrinking ice edge.

Along the New Jersey coast, Assateague and Henlopen have been holding to their respective stomping grounds on lower Barnegat Bay and the southern end of Long Beach Island. Farther north, Duxbury missed the last check, but had been along the Massachusetts coast near Winthrop — worryingly close to Logan Airport, where she was originally trapped last month. We hope she stays away from there. 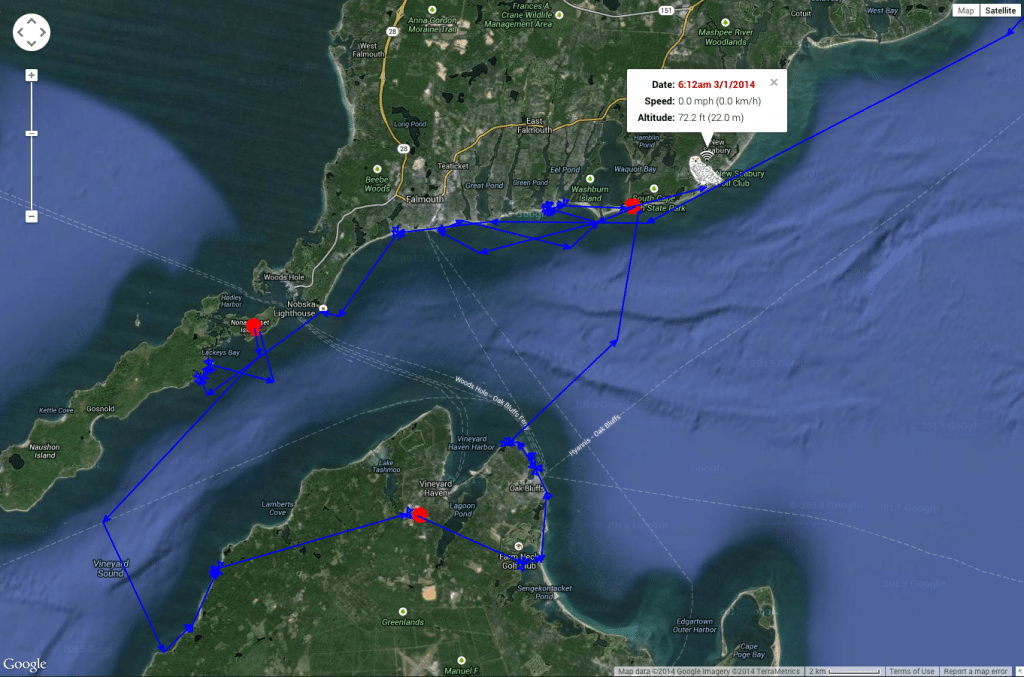 Sandy Neck, on the other hand, has remained well to the south, flying out to Naushon Island and then to Martha’s Vineyard, crossing that island and then coming back across the sound to Cape Cod again. She’s making nocturnal flights over the bays and sounds, but they don’t look like the kind of habitual hunting flights we see with Assateague — she crosses water on her way somewhere.

In Wisconsin, Buena Vista continues to check in sporadically from his longtime location in the Buena Vista Grasslands. The folks at CTT were able to push through a new transmitter program on March 1, which if it loads properly will bring his unit in line with the duty cycle we’ve been using on the other transmitters with much more success.

Also in Wisconsin, Kewaunee is hanging tight to his territory close to the edge of Lake Michigan — but not on the lake, since the western shore has remained ice-free this winter. Freedom checked in March 1 with a limited number of locations, but enough to show that she’s remaining south and east of town.

Finally, Ramsey remains probably the most predictable owl in the stable, habitually hunting the same “COR” area (as it’s known) of the town of Ramsey, MN, using hotels, highway lights and street signs as his hunting perches.

The one mystery bird right now is Hungerford, the young female banded on Assateague Island last month that made a rapid flight up the Delmarva and into Lancaster County, Pa. Her transmitter hasn’t checked in since Feb. 24, and while it could easily be a transmission or battery issue, we’re hoping there’s not a more serious problem at play, like a vehicle collision. Keep your fingers crossed.

25 Comments on “The Good, the Bad and the Ugly”