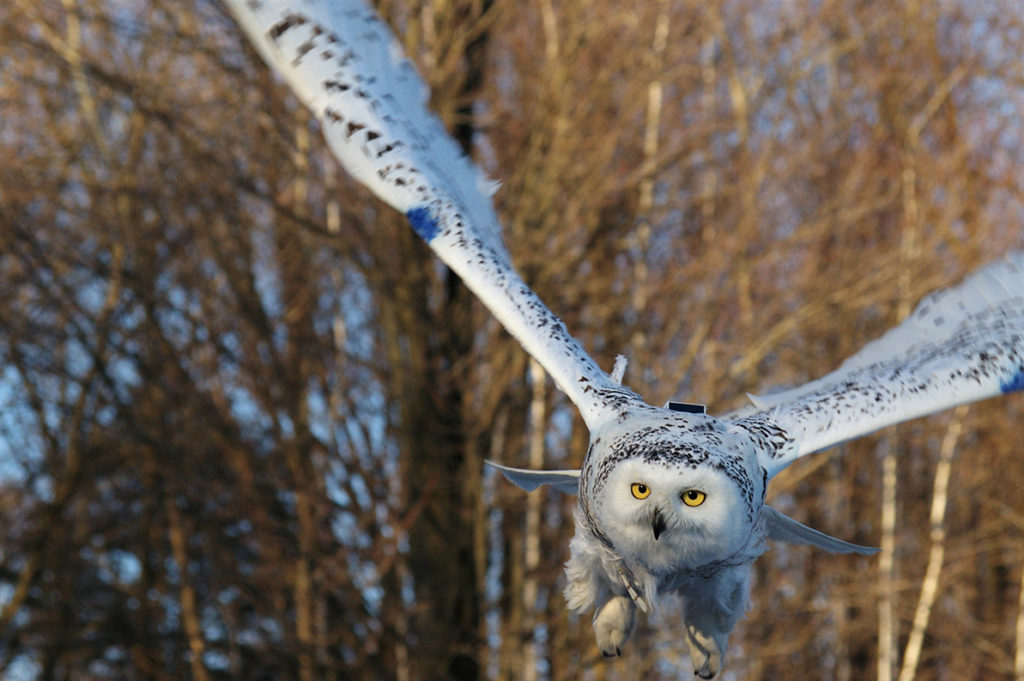 Third time the charm? Dorval after being re-retrapped at the airport, and released in the safer countryside. (The blue dye dots help airport wildlife authorities identify previously trapped owls, with or without transmitters.) (©Audrey Maynard)

The news this week is good. Several owls that had been in dicey places have moved (or, in one case, been moved) to safer locales. Buckeye is, at least, keeping to the less busy parts of Detroit Metro Airport, and after a month on the lam, Pearl is back on the grid, with more than a thousand GPS points tracing the path of her recent wandering.

Starting in the East, Wells was back in touch, in her by-now typical winter territory in Québec City, QC (well, technically Beauport, just down the St. Lawrence a short distance from Québec City proper), where she’s stayed the past three winters. She’s spending time out on the river, as she did toward the end of last winter, rather than roosting on the northern fringe of town, but she’s still hanging around Autoroute 440, the main drag along the northern shore of the St. Lawrence.

Not what we like to see — Dorval at Montréal’s airport, before her latest recapture. (©Falcon Environmental Services)

Closer to Montréal, Dorval wound up back at the airport for the third time this winter, where Falcon Environmental Services retrapped (re-retrapped?) her on Jan. 28. After a quick physical from our colleague Dr. Guy Fitzgerald, she was released near Saint-Jude, QC, the same general area where Otter and Yul have been lately. Happy to say, this time maybe she’s sticking with the countryside; while she’s moved about 40 km (25 miles) since then, it’s been south, remaining in the farm country south of the St. Lawrence, and about 40 km (25 miles) north of the U.S. border. 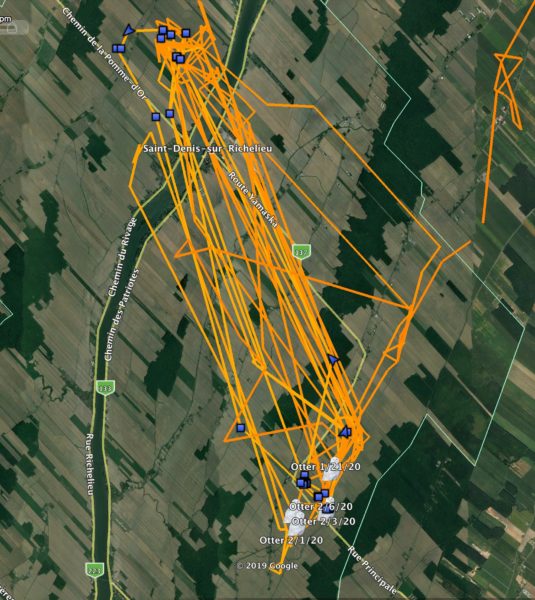 Otter’s back-and-forth from roost to hunting areas has created a neat gridwork on the Québec countryside. (©Project SNOWstorm and Google Earth)

Otter and Yul, meanwhile, are only about a dozen kilometers (about 8 miles) apart in the same general area, La Vallée-du-Richelieu regional county municipality northeast of Montréal, a region of flat horizons and open fields. We’re thankful that Yul has left her habitual hunting ground along one of the province’s busier highways in the Montréal suburbs, though she has been hanging around another road — Route 116 (Boulevard-Laurier Ouest) — which while still risky isn’t quite as busy.

Otter’s movements have been interesting — by day, he mostly roosts in farmland northwest of the Richelieu River, then flies southeast about 12 km (8 miles) across the river to hunt ag fields well back from Route 137. The result is an almost gridwork of flight lines.

Across the border in upstate New York, Redwood has been mostly minding his own business in the farmland around the Jefferson County hamlet of Philadelphia — though Jan. 28-29 he made his first known foray through the woods and onto the airfield at Fort Drum. Fortunately he moved back north and away from the installation, and a day or two later Tom McDonald (who tagged him, and does a lot of banding in that area) was able to find Redwood and visually confirm that the owl looked great, and that his transmitter was riding perfectly. 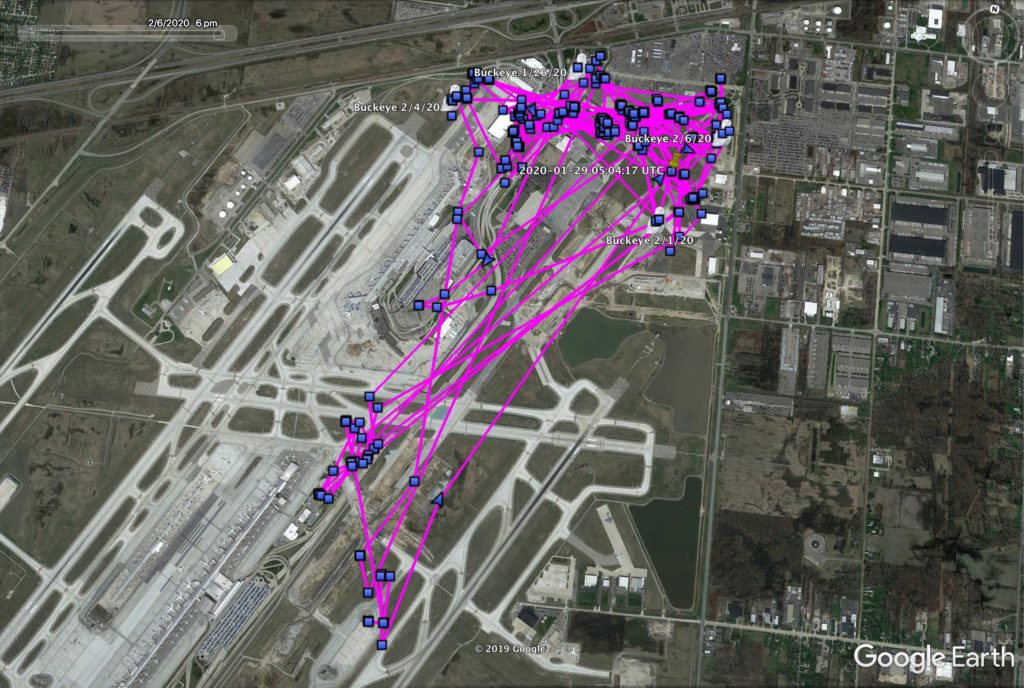 Well, at least it’s (mostly) not the part of the airport with big, fast planes. (©Project SNOWstorm and Google Earth)

Buckeye has eluded recapture at Detroit Metro Airport in Michigan, but at least she’s been staying in some of the less busy parts of the airport, near the rental car lots, cargo areas and hangers close to I-94. But she does occasionally fly down across and around the active runways, and we remain concerned that she stay out of danger.

Out on the Plains, Medina has been sticking like a tick to her winter territory near Steele, ND; she hasn’t really budged since arriving there in late December. On the other hand, Coteau has really be roaming. Since late January this third-year female has traveled more than 150 miles (240 km) south from Dickey County, ND, into the Lake Traverse Reservation in eastern South Dakota. If that name sounds familiar, it’s because Pearl went through that same area in December — in fact, Coteau is using some of the same fields that Pearl hunted two months ago. By Feb. 6, she was near the little town of Summit on the border of Roberts and Grant counties, SD. 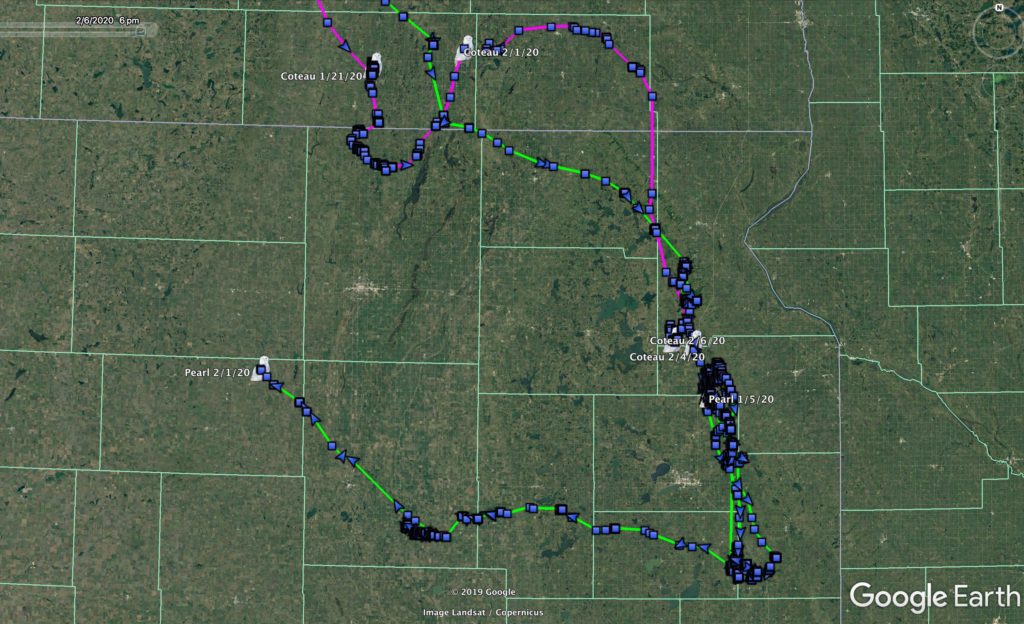 Coteau (purple) has been tracking some of the early movements of Pearl (green), while the latter has pushed far west into South Dakota. (©Project SNOWstorm and Google Earth)

Speaking of Pearl, she’d been off the grid for more than a month before reconnecting Feb. 1 and sending us more than 1,300 GPS locations. Starting near South Shore, SD, on Jan. 5, she followed her own tracks back south to the Hamlin/Deuel county line in eastern South Dakota, where she stayed until the third week of January. Then Pearl headed west and northwest through Clark, Spink and Faulk counties, a trip of about 120 miles (192 km). By the first of the month, she was near the village of Cresbard in Faulk County, where people are few and far between; at the last census, the county’s population density was three people per square mile.

Finally, no change for Stella, who like Medina seems to like it just fine where she is, near Whitewater Lake north of Turtle Mountain, Manitoba. She hasn’t really strayed from a small core territory since arriving there (after a sojourn all the way down into South Dakota) in late November. 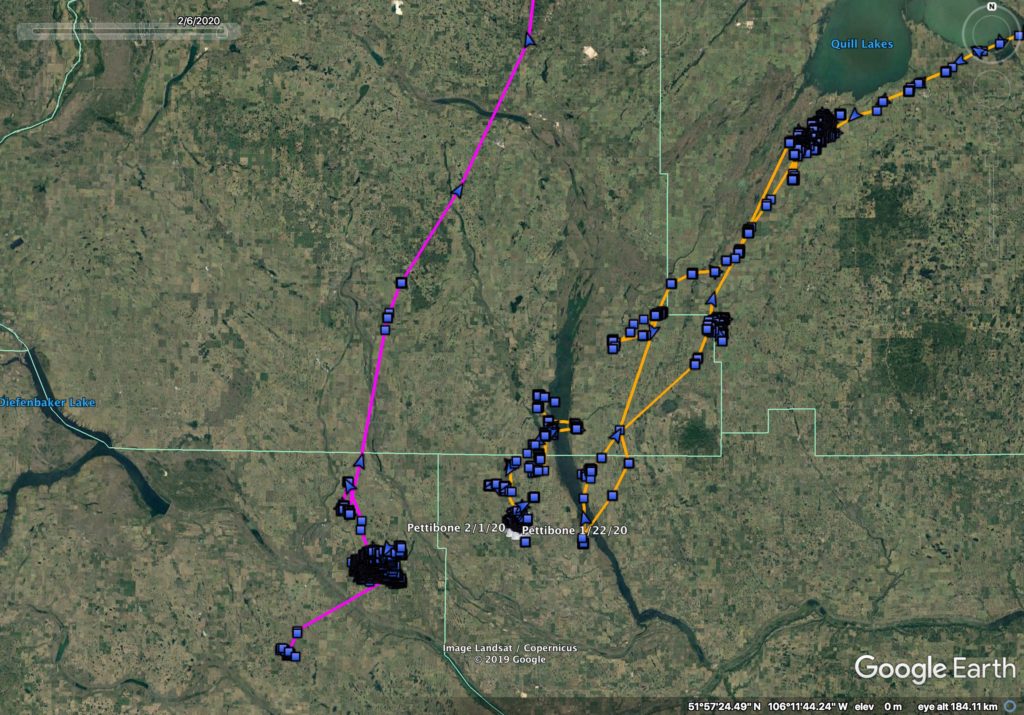 Up in Saskatchewan, Pettibone really seems to have found a sweet spot, too — and in a familiar place. He’s been just west of Last Mountain Lake, about 78 km (48 miles) northwest of Regina, and only about 27 km (17 miles) from where he spent most of last winter. He apparently found the buffet, because almost all of his activity is confined to a single 237-ha (635-acre) field, which we can only assume is full of small, tasty mammals. Snow cover mapping from NOAA shows little or no snow cover in that area right now — and little to none in many of the other places where our prairie owls are wintering, which is unlikely to be a coincidence. 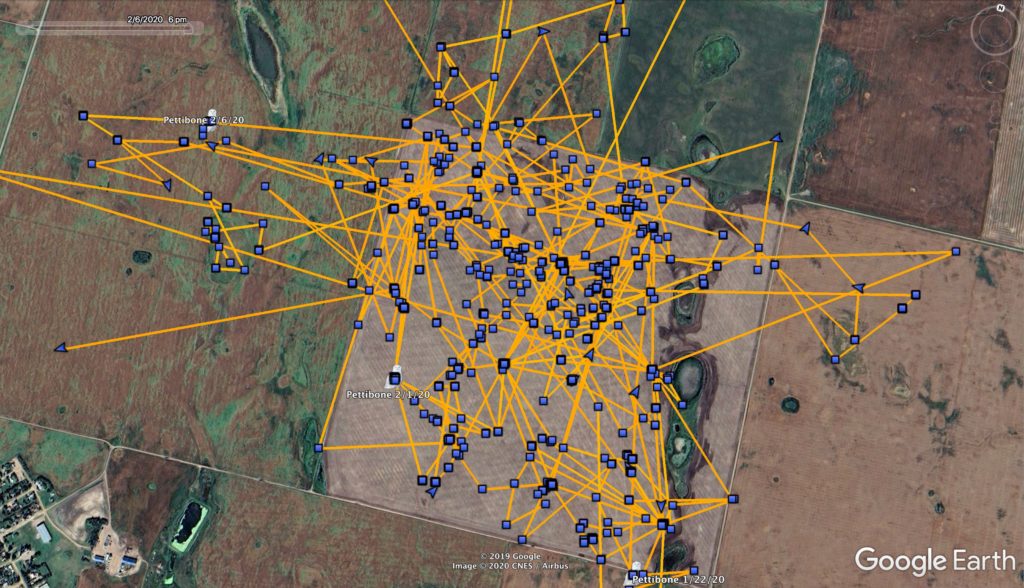 Pettibone’s field of plenty — why go anywhere else if that’s where the food is? (©Project SNOWstorm and Google Earth)

9 Comments on “Good News Across the Board”