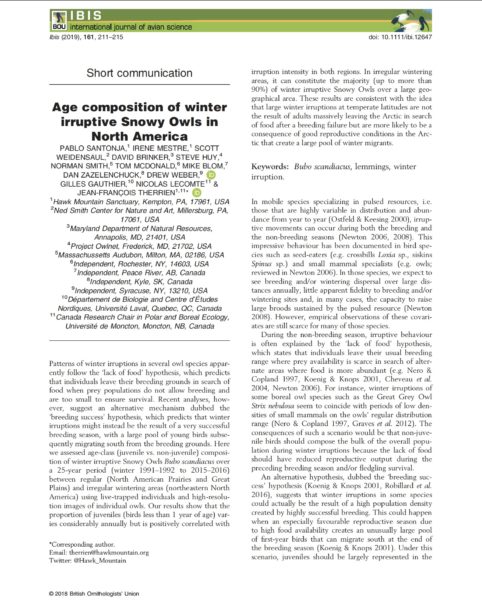 Since we started Project SNOWstorm five years ago, one of our major aims has been not only to share our findings with the public, but to disseminate them in the scientific literature as well. The latest in our series of publications has just appeared in the prestigious journal Ibis, looking at the age composition of snowy owl irruptions, and comparing those in the Great Plains and prairies, where snowies winter regularly every year, versus the Northeast, where numbers fluctuate dramatically from one year to the next.

We collaborated with colleagues in Alberta and Saskatchewan, as well as Laval University in Quebec. In addition to using banding and trapping data and Christmas Bird Count results, we used the hundreds of high-resolution photos submitted over the years through our online portal by SNOWstorm supporters (which have already been used to map age/sex class distribution during irruptions). Those photos show flight feather molt, which allows a trained observer to age and sometimes sex the owl.

The Ibis paper is here. Unfortunately, the journal has a paywall for non-subscribers, but the abstract of the article is:

Abstract: Patterns of winter irruptions in several owl species apparently follow the ‘lack of food’ hypothesis, which predicts that individuals leave their breeding grounds in search of food when prey populations do not allow breeding and are too small to ensure survival. Recent analyses, however, suggest an alternative mechanism dubbed the ‘breeding success’ hypothesis, which predicts that winter irruptions might instead be the result of a very successful breeding season, with a large pool of young birds subsequently migrating south from the breeding grounds. Here we assessed age‐class (juvenile vs. non‐juvenile) composition of winter irruptive Snowy Owls Bubo scandiacus over a 25‐year period (winter 1991–1992 to 2015–2016) between regular (North American Prairies and Great Plains) and irregular wintering areas (northeastern North America) using live‐trapped individuals and high‐resolution images of individual owls. Our results show that the proportion of juveniles (birds less than 1 year of age) varies considerably annually but is positively correlated with irruption intensity in both regions. In irregular wintering areas, it can constitute the majority (up to more than 90%) of winter irruptive Snowy Owls over a large geographical area. These results are consistent with the idea that large winter irruptions at temperate latitudes are not the result of adults massively leaving the Arctic in search of food after a breeding failure but are more likely to be a consequence of good reproductive conditions in the Arctic that create a large pool of winter migrants.

Familiar Faces
Heading for the Line